When you think about reviving old RPG and graphic adventure games, your mind typically jumps straight to the likes of humorous titles from LucasArts or SNES games from the likes of Square to name some examples. Yet we rarely seem to consider stuff from the pre-peak NES era. Stuff like the MacVenture trilogy or first-person dungeon crawlers. Well, developers panstasz and publishers Ysbryd Games are taking a trip back to that forgotten part of the 1980s with Word of Horror…which also happens to double as a horror game that’s a massive tribute to the likes of Junji Ito and Lovecraft, and sees you investigating the paranormal phenomena that has suddenly appeared in the town of Shiokawa, Japan due to the Old Gods being reawakened. Hey, no one said nostalgia would be pretty.

The demo I played featured a case where we had to investigate our uncle’s wake. An uncle who apparently never existed, of course. Upon entering their estate, a series of options at the bottom allowed us to explore various rooms as events unfolded. With each room exploration, a random event pops up; for example, a weird monolith with runes scrawled upon it could suddenly emerge out of the ground. With the right skill, we can select the option that allows us to decode the room. Without it, the only other option available caused a slight blow to our character’s reason unless, say, our Perception stat was high enough. Players have to watch out for their reason and stamina meters (AKA sanity and health), respectively. If either hits zero, game over. Some events can feel a bit cheap, but such is the way of the roguelike, as sometime you get a bad roll and whatnot. 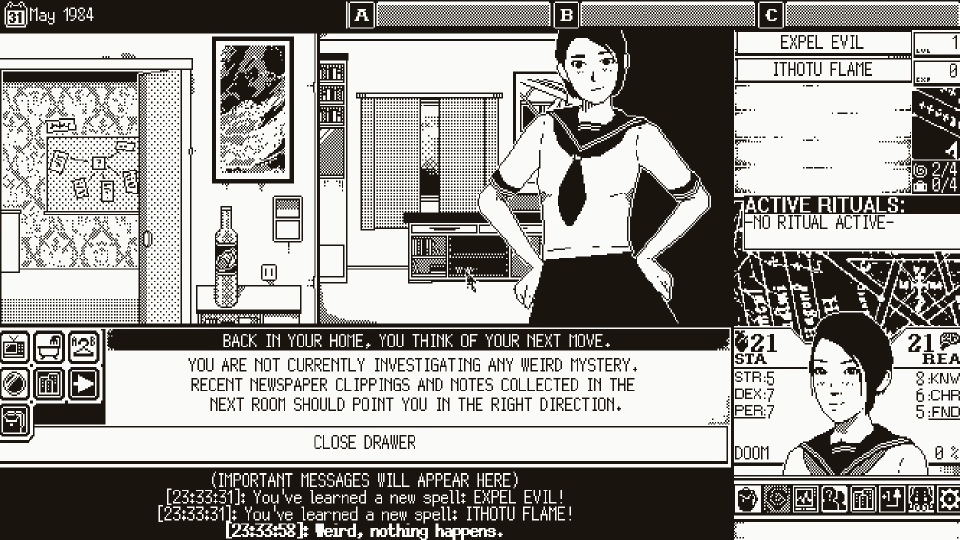 After exploring more rooms, more people showed up in the house, mourning our uncle. In talking with them, they gave us a pamphlet that detailed how there was a certain schedule which everyone attending should follow, which happens to include rituals that need to be performed near the body at certain times. The more investigative elements in World of Horror are where its strengths clearly lie. Making notes and having to properly remember instructions for rituals that involve proper sequences of actions helps play up the mystery and increase tension, making for some enjoyable stuff.

Of course, what also creates tension in World of Horror is the combat. This is where the game enters turn-based RPG mode, showing off how it can make even 1-bit pixel art seem creepy. Enemies such as the likes of cultists and monsters have a surprising amount of detail, looking even outright terrifying, doing the game’s inspirations proud. It really does look like it can create scenes straight out of a horror manga. The combat itself is also unique, with your actions each turn taking up certain amounts of time. You only have a limited amount of time to work with, as indicated by a meter. Searching for weapons if you don’t have any takes up a huge chunk, as do larger attacks. So you need to try and manage the right blend of defensive and offensive actions to succeed. It’s challenging yet fair, and definitely fun. 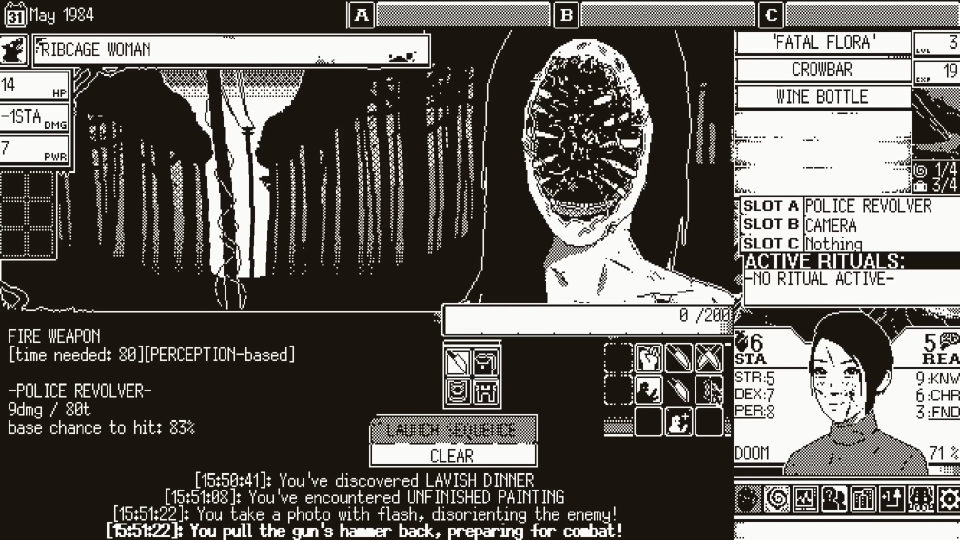 Alas, the demo ended with me missing a part of the wake’s schedule, and long story short, it turns out now I kind of have to kill one of the mourners as a sacrifice in order to appease supernatural forces, sooo…yeah, not the best ending. Our character came out, and no one remained, seemingly no trace of what just happened left behind. So yay, scarred for life! Overall, it was entertaining and unique with the bizarre events relying on your stats being mostly fair and enjoyable, but I couldn’t help feel that it was sort of lacking something.

And then I got to see the larger Early Access version of World of Horror that’s available now thanks to the assistance of a friend, and…yeah, this is one of those cases where a quick demo clearly doesn’t do the game justice.

The meat and potatoes of World of Horror, you see, is a main story where our character has to solve five randomized supernatural cases in order to earn five keys to gain access to a lighthouse, where they can confront the otherworldly forces plaguing everything. So you have to solve five cases in a row, trying to manage and replenish your stamina and reason between all of them, receiving perks and curses after every case. You may be able to increase your Intelligence stat and gain the ability to deal more damage without weapons, but now a curse has caused there to be more enemies in a certain area. Speaking of which, you also get to explore more areas for potential rewards/side objectives, recruit allies for combat, shop for items, fight ghost enemies through unconventional means and a lot more.

So the game as a whole is deeper, more complex, ramps up the scarier bits, and is just a ton of fun in general, so yes, I would recommended springing for World of Horror in Early Access right now if you can. The stories crafted so far are well-written and nicely creepy, the gameplay is simple on the surface while still containing a lot of depth and little options like being able to pick color filters like glorious CGA are the cherry on top. It truly is one of the most unique RPGs in the works right now, and does both Junji Ito and a more lesser-known era of PC gaming proud.