Chronicle: RuneScape Legends is a collectable card game based on the massively popular, free-to-play browser based MMO. RuneScape launched in 2001, has boasted an incredible — in fact, Guinness record holding — 200 million accounts, so it might not be unreasonable to expect that Chronicle has a built-in audience of fans. Although the developers are counting on players having some nostalgia for the MMO, familiarity with the parent game and its standard issue fantasy denizens is not necessary for playing or enjoying Chronicle. Some experience playing CCGs such as Magic: The Gathering or Hearthstone might, however, give the player some insight into how Chronicle is attempting to change at least a few of the now-accepted rules of the genre.

Much of Chronicle will seem instantly familiar: the player assumes the character of a hero/Legend, and builds a deck/combat team out of cards that represent different fantasy archetypes — knights, mages, healers, etc — or creatures that attack the opponent or aide the Legend, or simply cards with weapon buffs or extra card draws. Players can assemble their decks (limited to 10 in the beta) from up to 25 cards earned in battle or purchased through microtransactions. Only players entirely new to the genre will need much help understanding these systems, which is great, as the game’s tutorial feels pretty rushed, incomplete and not always completely transparent. 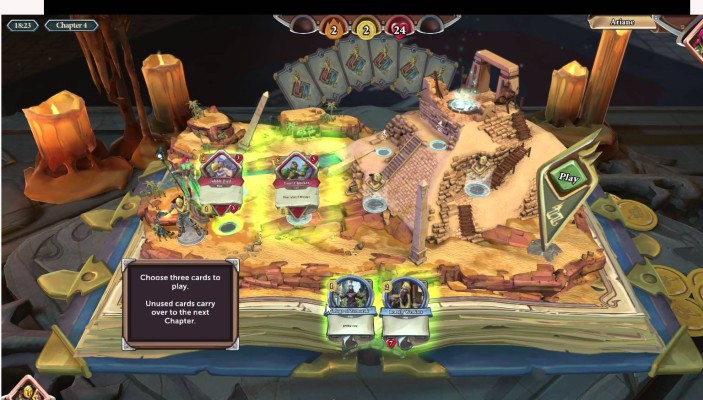 Chronicle‘s biggest hook is that when the player selects a deck and begins the battle, the opponent’s deck is hidden. Battles are played out sequentially across the board, each player’s card in turn doing its thing to aide the Legend or impact the opposition. The game play surprise is in finding out how one’s deck matches up against the other player’s. Pretty early on players figure out a build order that works best, but the level of uncertainty in not knowing exactly what the other player has done keeps the game from being just another CCG and Hearthstone clone. Of course, Chronicle‘s case is not helped by its cards looking Hearthstone derivative in art style.

Instead of being a tabletop, the matches are carried out on pop-up-book-looking 3D stages with castles and mountains and moats set in the RuneScape MMO land of Gielinor and Morytania. The Legends themselves are animated 3D figures that fight and battle, although staying confined to their little circular bases. This isn’t to suggest that the battles or animations look particularly good. They seem to be engineered to run on lowest common denominator PCs. Hearthstone’s little animated touches are more fluid and effective. Not being familiar with RuneScape, it’s hard to tell how much Chronicle makes reference to the parent game. 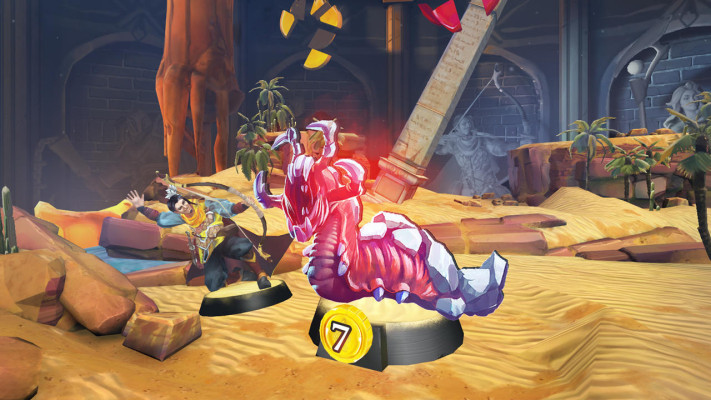 At this stage of development, the single player campaign is not yet in place. There are practice matches against generally capable AI, online matches against other humans, and not all of the Legends or hundreds of different cards are yet available. The developers are making daily changes in crafting — players collect tokens during matches that allow them to craft special Legend-specific cards — the size of decks, and balancing, not to mention minor tweaks in the interface or the way cards are manipulated.

Chronicle is coming to the CCG party a little late and a superficial look might make potential players dismiss it as another Hearthstone wannabe. To be fair, though, RuneScape was a player in the MMO years before Blizzard arrived on the scene. Delving into it a little deeper reveals some intriguing hooks at least in term of mechanics and game play. At this early stage, and minus the single player experience, the lore and characters — or the cards themselves — don’t seem hugely distinctive from those of a half dozen other fantasy card games despite their storied lineage. Despite these reservations, Chronicle‘s deviations from the CCG norm and its ties to RuneScape might give it some real traction when finally released.