Mirror’s Edge dazzled players eight years ago when it was first released. Its tale of corruption was compelling and the parkour-heavy gameplay was something unlike anything on the gaming scene at the time. It featured a compelling protagonist in Faith, who bucked the system and did what was right. It didn’t achieve a ton of success, but did garner a lot of critical acclaim and its star grew over time. It was a sleeper hit in its day that grew into something much greater later on. Despite that, it seemed destined to never get a sequel. Rumors swirled, but nothing concrete was ever announced until E3 2013. That was when Mirror’s Edge Catalyst (then just Mirror’s Edge) was shown off.

It showed Faith running around and tons of fast action — and now, after three years of waiting — it’s almost time for the game to be released. Thanks to an early build, we were aable to see just how far this game has come since then and at least get some kind of an idea as to how it has evolved. The original game was a bit cryptic when it came to where to go and that issue has been addressed in the reboot. Now you can get a runner’s guide with a simple click of the right stick. This will bring up a red trail alongside a red ghost to show you the correct path. This may annoy some long-time players who prefer the challenge of carving their own path through the world, but it’s entirely optional and something that breaks down a barrier that hurt the prior game. 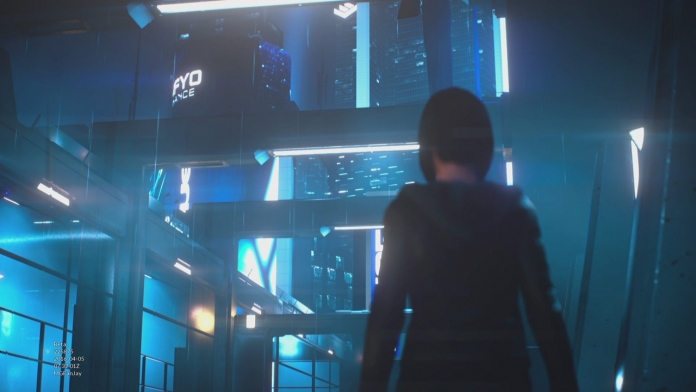 Fast traversal is still the name of the game, and in time, you will learn to be efficient. Even early missions will set you against a time limit, and failure will result in a restart. Load times are a bit excessive – so while regular checkpoints make death a slap on the wrist in terms of game progression, they still eat up quite a bit of your time. The key is to look at your environment and only use the running guide as a base, since that will get you from Point A to B – but not in the fasted manner. You could find a shortcut, or maybe even find something slightly off the beaten path, like a recording or a data card that you can’t actually grab now. It should be made more clear that getting something like that will result in a failure state, since it would be nice to kill two birds with one stone in a mission – but instead, you just have to remember where things are after the mission and grab them then.

The control setup takes some getting used to at first, but becomes second nature in due time. LB is your Up function button – essentially meaning it’s there to jump and grab onto things above you. RT allows you to dull the impact of large falls, slide under things ala Mega Man, or just bust down doors while free-running. X and Y are your light and heavy attacks, and RT also acts as a dodge button when combined with a left stick movement. A grabs items, and you can also tinker with the control scheme if you want. I found that it was easier to just use the default scheme and think of the control setup in a logical framework. The bumpers and triggers are your traversal buttons and context modifiers, while your face buttons act as your action buttons. 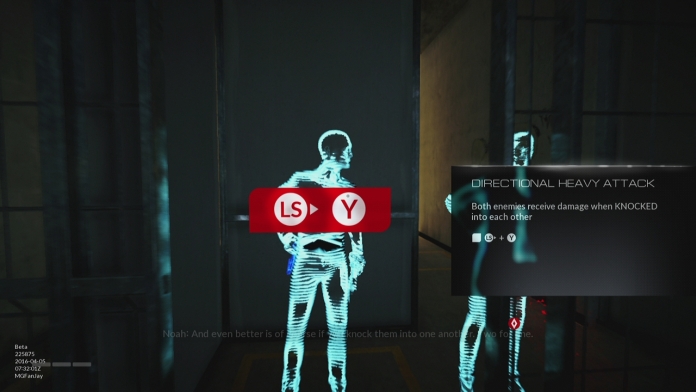 Visually, it’s a gorgeous game with a heavily-saturate color palette. There’s a lot of white, yellow, blue, and red throughout the world and it makes it feel unlike any game…except the first. Detail levels throughout the world have ramped up considerably though, while animation is a bit iffy. First-person combat looks fantastic when it’s all canned animations involving throws and close-up strikes – but when you engage in free combat, things fall to pieces. Punches look a bit robotic, and enemy animation is ridiculously overblown – with every shot either resulting in someone bonking into an ally like a Three Stooges sketch, or flying around like a person playing the insurance fraud mini-game in Saints Row. It causes a real disconnect with the story, and definitely hurts the immersion.

Fortunately, the story – as much as can be gleamed from such a small portion of the game, has the core elements needed to be compelling. We’re given enough of Faith’s story – her incarceration, release, rebellion, and big hints towards an untold past that you want to find out more. The grander conspiracy at work with KrugerSec, and Faith being raised by Noah gives you something to latch onto. Icarus is a cocky punk in the rebellion, but we can tell that there is a bit more to him than meets the eye. Speaking of which, he has some of the creepiest yet in gaming – and they’re a bit terrifying. 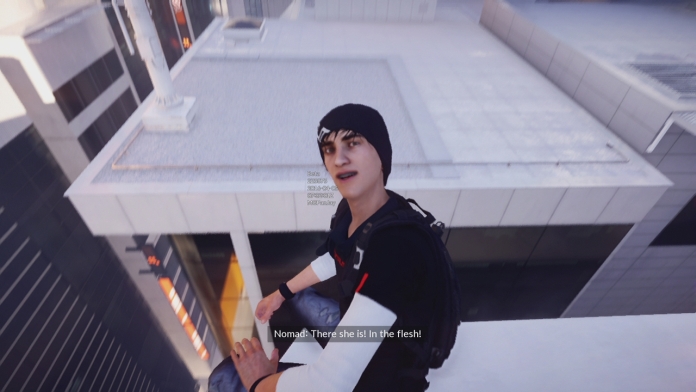 In terms of atmosphere, Catalyst does nail the “you against the world” vibe well. There is an ever-present sense of danger and that should only get better in the full game when you have more odds against you. In what little is available, you will get challenged a bit, but never quite overwhelmed and that’s probably for the best. The idea behind the beta is to make sure folks can get through it, enjoy it, and ensure that things are rock-solid. Glitches have been reported by some, but we didn’t encounter any in our time with it and the game itself has some gorgeous architecture to look at when you’re running around — like a Venetian blind-looking area you can dart underneath and just see light peering through the slats above. It’s an impressive visual even with the texture work not being finalized and the full game should look even better.

Mirror’s Edge Catalyst is currently set for a June 7 release, and based on the preview build we had a chance to play, it should be well-worth a look by ME veterans and newcomers alike. It’s a bit surprising that Xbox One pre-orders won’t also get the original game, but maybe that’s something they’ll give away via Games With Gold for that month anyway. As it stands, Catalyst shows a lot of promise and should deliver the kind of thrills that fans of the first loved, while making it more accessible for those who never had the chance to play it.