If someone were to ask any gamer what a dwarf is, the answer would likely be some short stocky chap with a glorious beard, wielding a battle ax and living underground or in mountainous caverns. When they aren’t swigging ale or going to war with orcs, they probably have a day job like every other average Joe that involves some sort of blacksmithing or mining. Dwarves are generally stock characters for medieval fantasy settings and aren’t depicted too often in futuristic sci-fi settings, but that changes in Deep Rock Galactic. The dwarves are still what you’d expect them to be, except instead of battle axes they have high tech assault rifles and travel to their mining destinations via spaceship.

With the general premise of Dwarves in Space (not to be confused with The Muppet Show’s Pigs in Space) this is clearly not the typical dwarf-filled adventure or at least it didn’t fit what this writer was expecting when approached about checking out a game that involves dwarves and mining. Deep Rock Galactic is a first person shooter mixed with a mining expedition. Basically the crew of dwarves has to go out and collect certain minerals and return the harvested ore back to their spaceship, and naturally during the course of doing this they encounter hostile alien monsters that want to kill them. Pitching it like that doesn’t make it sound like the most exciting premise for a game, in fact it sounds more like a grueling manual labor job where in addition to the normal occupational hazards that come with a career in mining the added threat of death by monster is added to the list but the actual game is a lot more fun than this job would be in real life. 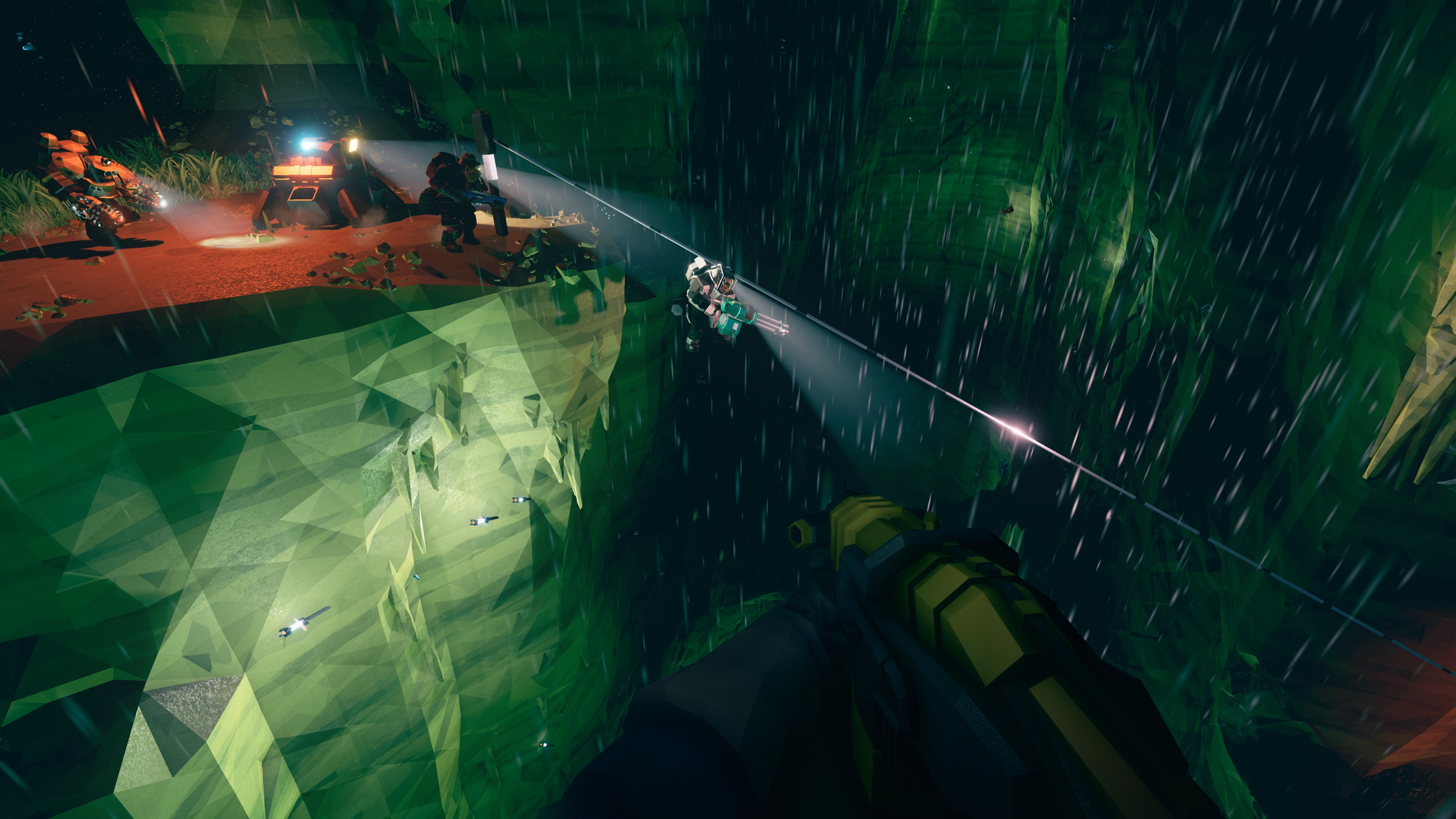 Like a real life mining expedition, Deep Rock Galactic works better as a group endeavor instead of a solo effort. And much like if you assembled a team of people in real life, different tasks are better suited for different individuals, which is where the class system comes into play. The Driller is an expert at knocking down walls and thanks to his equipment is more efficient at this than the others. The Engineer is the nerd of the group, but also incredibly useful when a horde of intergalactic space mutants run into his gun turrets and other traps and he can provide some much needed healing. The Gunner should be self explanatory: he’s just a mean dwarf with a big gun. The Scout is light on his feet and useful for exploring the area for minerals and enemies. Not the most glamorous job, but useful nonetheless. This line of work is rough for a solo practitioner but it can be a blast with a little help from some friends.

To add to the replayibilty of Deep Rock Galactic, all levels are procedurally generated so there is a bit of a roguelike never the same game twice type of feel to it with different enemies, map layouts and objectives. This feature is enhanced by the fact the environments are actually quite fun to explore. The levels are filled with so many destructible environments and excuses to travel via zip line and so far seem to do a good job of balancing the mining and fighting aspects of the game against each other. 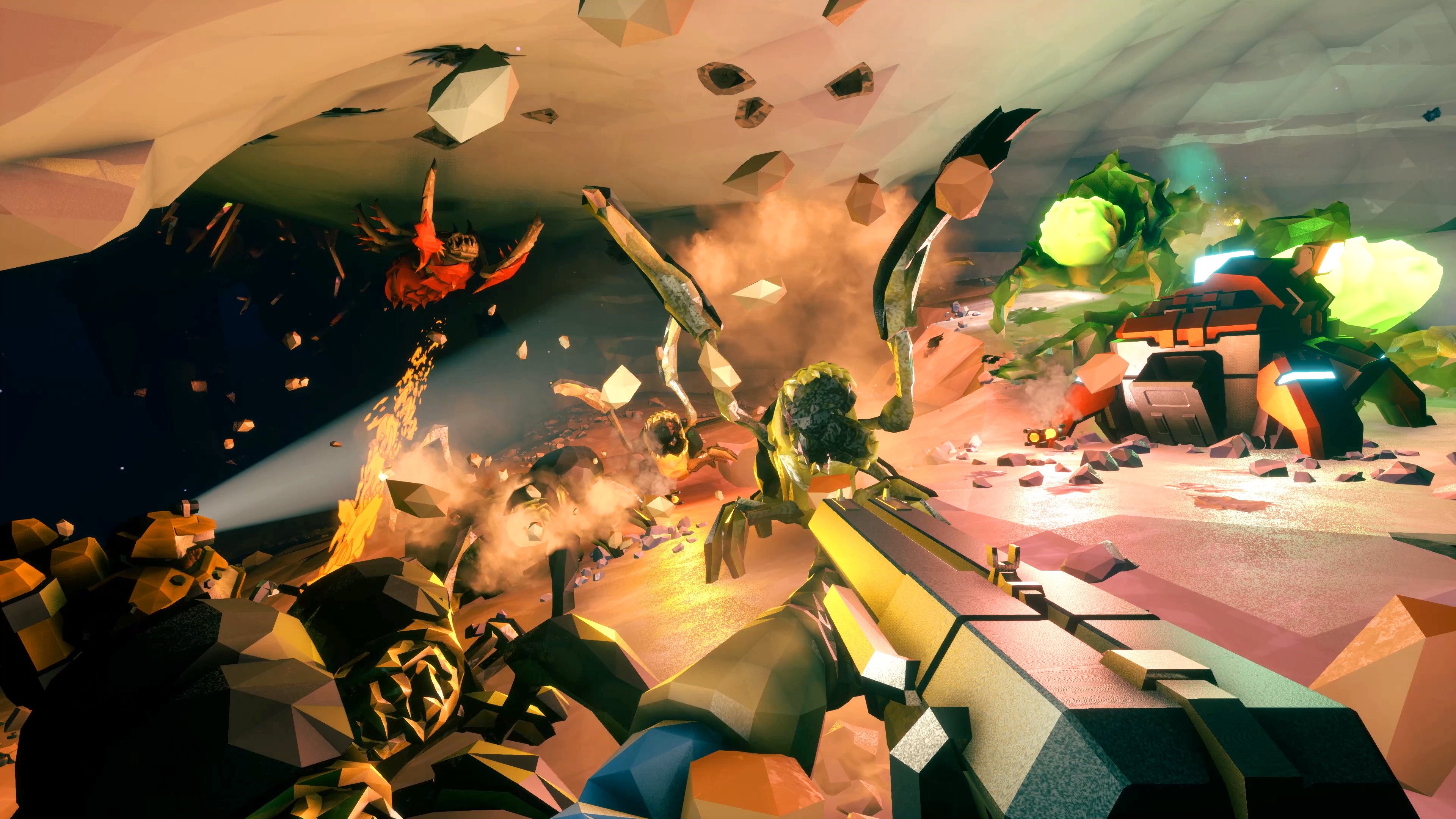 Deep Rock Galactic is scheduled to hit Steam Early Access and the Xbox One Game Preview February 28 with a scheduled complete launch sometime in 2019. A lot of changes can come its way between now and then, but so far it looks like it will be a good time, especially if you can get some friends on board. Good communication among team members is crucial for success, but also this has potential to be one of those cases where the adage the more the merrier is true.