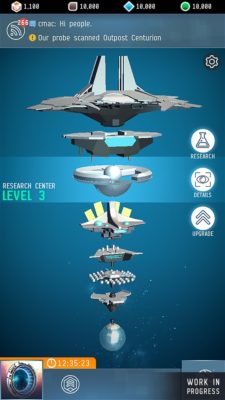 After assuring the attending audience and Twitch viewers that Project Nova was still a thing, with fresh information due in the coming months, CCP Games’ CEO Hilmar Veigar Petursson dropped a piece of news no one was expecting: a mobile title set in the EVE Online universe. Promising a complete experience, including the cooperation between corporations and the inevitable betrayals that are destined to occur, the ambitious Project Aurora, made in conjunction with PlayRaven, snapped up the attention of EVE fans with the promise of a mobile game that would be deep enough to hold their attention when they couldn’t play the main game. The EVE Vegas weekend afforded everyone in attendance the opportunity to play around with a pre-alpha version, a chance that couldn’t be turned down. In practice, the game takes some obvious inspiration from old school browser-based world conquering titles and imbues it with an EVE flavor.

The set up and play will sound familiar to fans of Tribal Wars and its ilk: the player spawns on a map with control of a Citadel. Inside the space station are facilities to improve, such as refineries for gas, crystal, and ore, shipyards, a research facility, and others. The refineries constantly add resources to the pool at a predetermined rate, while increased technological prowess and shipyards allow for bigger, more expensive ships as well as various statistical bonus based on research. Around the player’s base are pockets of materials and moons that can be mined, as well as other players that are, hopefully, soon to be allies.

The short term goal of the game is to constantly improve the base and build a more powerful fleet. While we were automatically placed in a corporation when logging in for the pre-alpha, finding a strong group of like minded players is incredibly important for protection and progress. This is because a base can be attacked at any time, whether or not the player is logged in. Teammates will be able to see the impending attack via a long dotted line, so they can send defensive reinforcements. Well, if they feel like it, that is. Depending on distance, the amount of time for attackers and defenders to arrive can vary, meaning time management is of utmost importance. Fleet building, claiming produced resources, and improvements are the same; the player must check in often so that purchased items can be made usable. 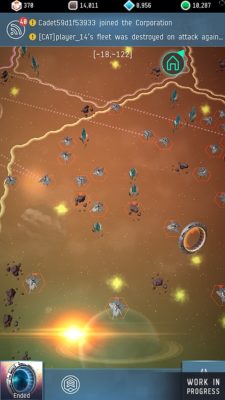 Unlike other titles of this ilk where the primary goal is to build a sprawling empire that spans that giant map, there is a true goal in Project Aurora: reaching the center of the universe. During the pre-alpha, once a day the event would begin, broken down into three parts. The first was for players to donate as much as possible to the corporation across six different categories, each of which give a universal boost to every ship in the corporation. In addition to making the ships more powerful for the next phase, donating also awards corporation points, which is then spent on specific base improvements and other items. Because of these benefits, players are limited in the amount of donations that can be made to prevent abuse of the system.

When the donation phase is ended, it’s time to send those temporarily boosted fleets out to pull relics. At a certain point on the map, three relic icons will spawn. Everybody is then tasked with throwing their ships at these points, basically creating a bloodbath. Seriously, the amount of attack and support lines here would make a palm reader nervous. Through proper fleet building and coordination with the rest of the corporation, it is possible to capture the relic, pulling relic resources to use for the next phase. My corp wasn’t so lucky. To any fellow Koi corpers out there, I tried.

The final phase is to use the relics pulled to repair the corporation’s jumpgate. This is a task that required one thousand relic pieces. Our team had twenty the last time I was able to check. So, yeah. We got stomped. This isn’t the fault of the game, though. There was an easy to use chat system for system wide, corporation, and personal events denoted in a way that it’s impossible to miss when something new comes in. Outside of a couple of elements that could use tweaking, the user interface was rather easy to understand, too. There is a lot of information to take in and it was simple to find it. 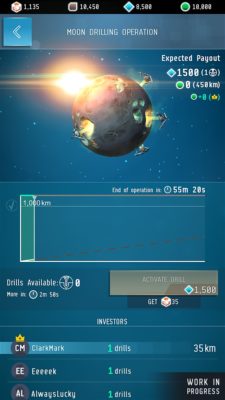 In the interest of complete reporting, it should be noted that there was some severe lag issues when trying to scroll the map. Whether there was a memory leak or some other culprit, that did become frustrating. Others reported that the game chewed through their battery at an alarming rate, though my Samsung Galaxy Tab E held its charge just fine. The developers were a constant presence in the chat rooms in game precisely because they wanted this type of feedback, and were the first to admit that optimization needed to happen. Again, this title was in pre-alpha status, and this session was meant to be a cool way to gather much needed data. One must also point out that the assets are nowhere near complete. Much of what is seen in the screenshots feature placeholder art, with plenty of missing textures and such.

Overall, though, Project Aurora surprised me with the way it got its teeth in me. The mechanics focused on solo improvement and entertaining teamwork have been used in the past, but this title has some twists that improve on the formula, differentiating it from the others in important ways. It’s a mobile game that obviously has some of the best brains at CCP behind it and one that should garner more interest in the universe. Depending on their monetization plan, this could become the next major mobile game for die hard EVE players and fans of mobile conquering titles alike.