“OK, no problem” I’d confidently remark whilst playing Card Shark — the latest card-oriented tale from Reigns developer Nerial. A brief introduction to a new card trick, an occasional repeating of the tutorial to properly master what the game was asking of me, but for the most part entering a new in-game setting, content in how proceedings would go. Whereby my character would engage the latest victim and swindle a sizeable portion money out of. Then the actual encounter and events turn out a little more stressful than initially expected. “Wait…do I shuffle the deck then add the marker, or is it the other way around?!” Worse still: “Oh no, did he have more diamonds in his hand, or spades?!” It’s these brief, but figuratively sweaty-palm moments, that are the real joy of a game like Card Shark. Odd it may sound that the most satisfying parts are those where you don’t feel fully in control of. Understandable relief eventually following when you find out that you’ve not only pulled through, but have successfully managed to memorize the correct sequence of control prompts and gestures.

Because the stakes in Card Shark aren’t just your typical binary state of succeed or fail. More specifically: try again without any form of repercussion. Slip up in the con and those winnings go to your opponent. Lose all the money you’ve brought to that setting and it’s back to the hub to withdraw another handful of coins from that depository. Providing you did deposit some currency to begin with. Oh, what’s that: you were so sure of your own abilities that you didn’t think that far ahead or even have a back-up plan? Indeed, while the power may be in the player’s hand, so too is the notion that it can all go so horribly wrong if one factor is out of sync. Card Shark revels in this kind of temptation and it’s why a game of such straightforward delivery is already one that could provide just as much stress in sipping up as it does smug satisfaction in proving a sufficient con-man. And things only get more stressful when you’re playing against a timer, as noted by a gradually-increasing slider that represents your opponent’s suspicions that something is up. Fail to win at three rounds in time and your opponent will allege (rightly so) that some form of cheating is at play. 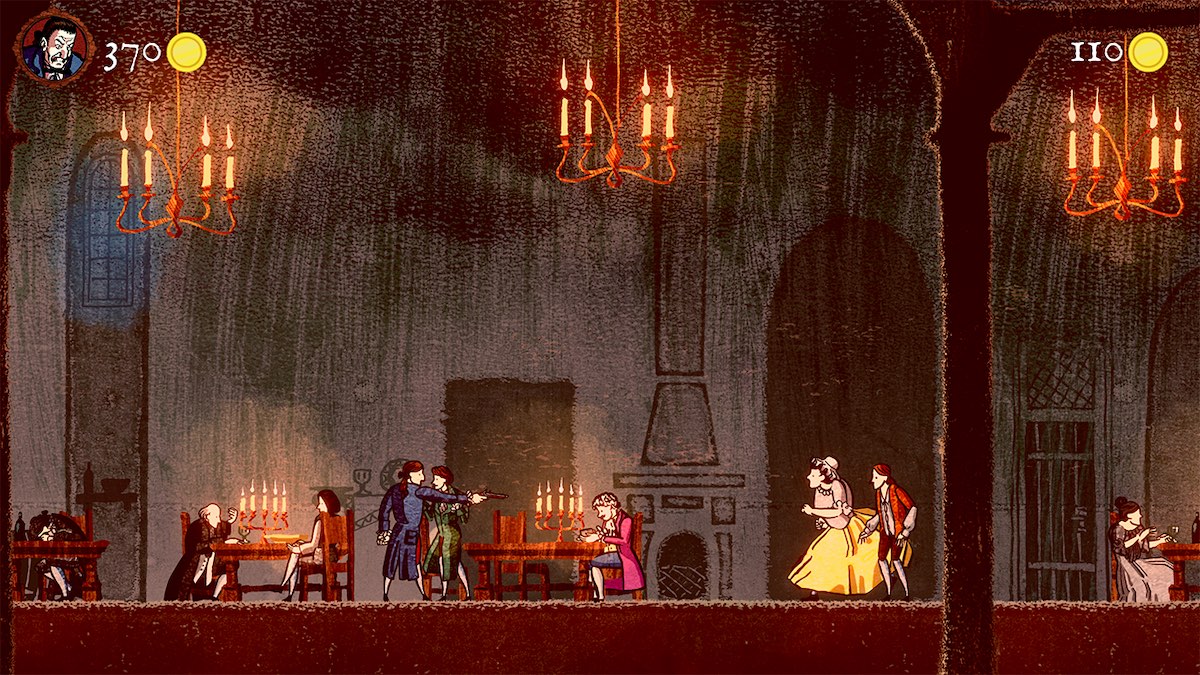 Thankfully, Card Shark steers the notion of timers away from any negative preconception of hollow stakes. If not in any complex mechanical way — though there are a few neat tricks to steer around — then at least the idea that players will no doubt be battling their own hesitancy. Spend too long drawing out animations or staring at what’s before you, that meter will bleed precious time. Hurriedly rush proceedings by contrast and you could slip up and send the wrong signals. Leaning the analog stick right when you meant to have it point down; making frantic side-to-side gestures when, if you were a little wiser with time, you could’ve made sure to translate the number “3” or a suit of card via careful, slow movements. Yes, these slip-ups aren’t entirely out of the realm of the game’s back-end not properly registering its desired inputs. Though, full transparency, with the brief time spent with the game so far, that concern hasn’t [yet] materialized.

In Card Shark‘s broader defense, it makes sure to include a prompt during moments of interaction — a means to presume what players may want, before deciding to lock in said prompt. A welcome bit of levity, given how much players at times are required to memorize and dish out in the heat of the moment. But even so, Card Shark knows not to guide its players too closely or let them off the hook that easily. The biggest antagonistic presence in the game as noted not so much an opponent’s suspicions, rather your own reckless insistence to get through a sequence that it winds up betraying you at the most crucial of moments. Constructively or even psychologically, one of the smartest bits of design in Card Shark is how the game employs screen space to bait players into such unforced errors. An early instance requiring you to pour opponents a glass of wine while taking a peak at their hand. The problems arising in a cleverly two-fold manner. One: both the wine-pouring and dealt hand take place apart enough that one cannot focus on both elements. Second: the game syncs the opponent’s animation to that of your own pouring. Meaning one not only has to manage the frantic back-and-forth staring, but also take a surprisingly more gentle approach to aiming an analog so as to maximize the time available. In practice, this one scenario looks ordinary, but when approached on the basis of mechanics, it’s impressive at just how much is happening behind the masquerade of its visuals and aesthetic. 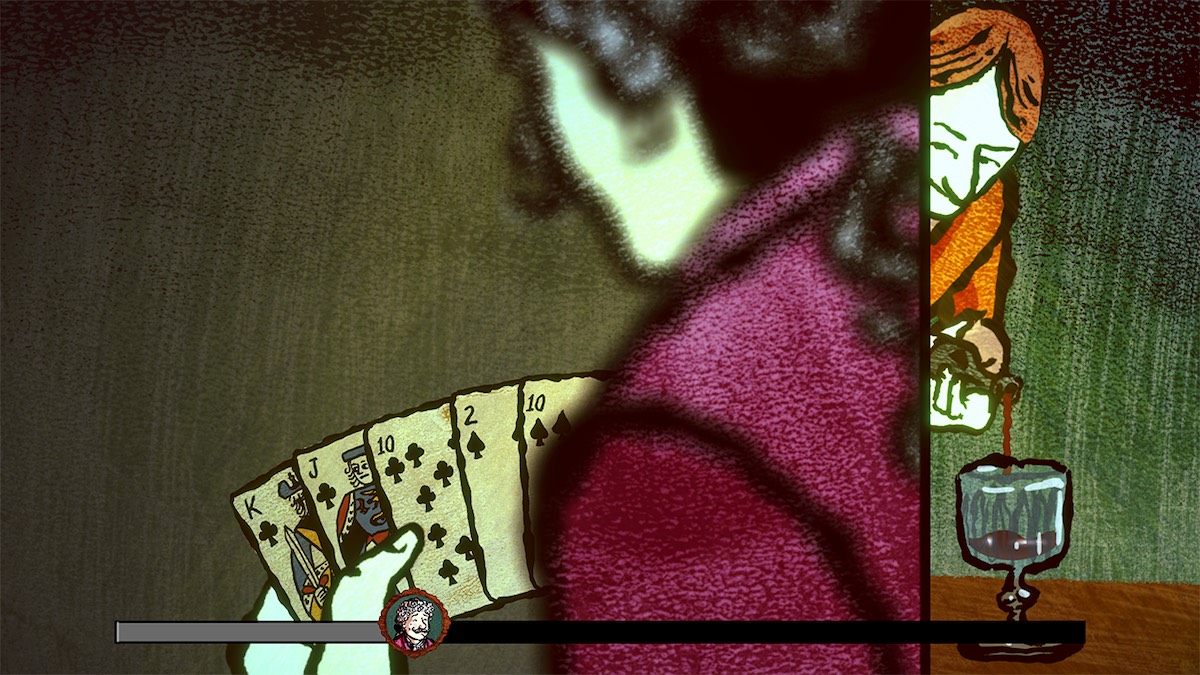 Perhaps that’s one of the reasons behind Card Shark‘s chosen appearance. This collage-like assembly of hand-drawn/hand-sketched extractions of building interiors, furniture, even vegetation as if meticulously positioned onto a canvas. Moving past the representation of the Baroque period of the setting and in a while better reflective of the abridged nature of history. Simplified character models laid atop scenes whose dominant color palettes are that of nature-associative yellows, greens and momentary blues. A personal highlight being that of a scene where a river is involved — said feature represented not by some rendering of flowing water, but through what resembles some textile material being dragged from one place to another. Card Shark‘s locales may be limited to one solitary screen at a time — the gameplay outside of card games, relegated to moving left or right and pressing a prompt to engage with other characters — but such simplicity needn’t be deemed a negative because of where the true intentions lie. Drawing on the mechanical minimalism of point-and-click adventures it may obviously be doing, while there’s a story at play, it’s far more deductive on a gameplay front than it is a narrative one.

The question then is just how compelling can its card game con pitch get later down the line. Especially when you consider the level select interface and hopping between stills of a chosen setting can come off rudimentary. Select a location, make a bet, get some button prompts correct, rinse-and-repeat. That may well paint the game too harshly, given how embedded in its chosen premise the gameplay is. To which one hopes that it can still manage to rustle up a few more curveballs to keep encounters as tense and as precarious as these early instances have been. But the most impressive thing remains how well Card Shark has incorporated so universal and rehashed a game concept as the “ticking clock.” Better still: how it makes each passing second not only feel precious, but that which in hindsight, you know could’ve been better utilized. 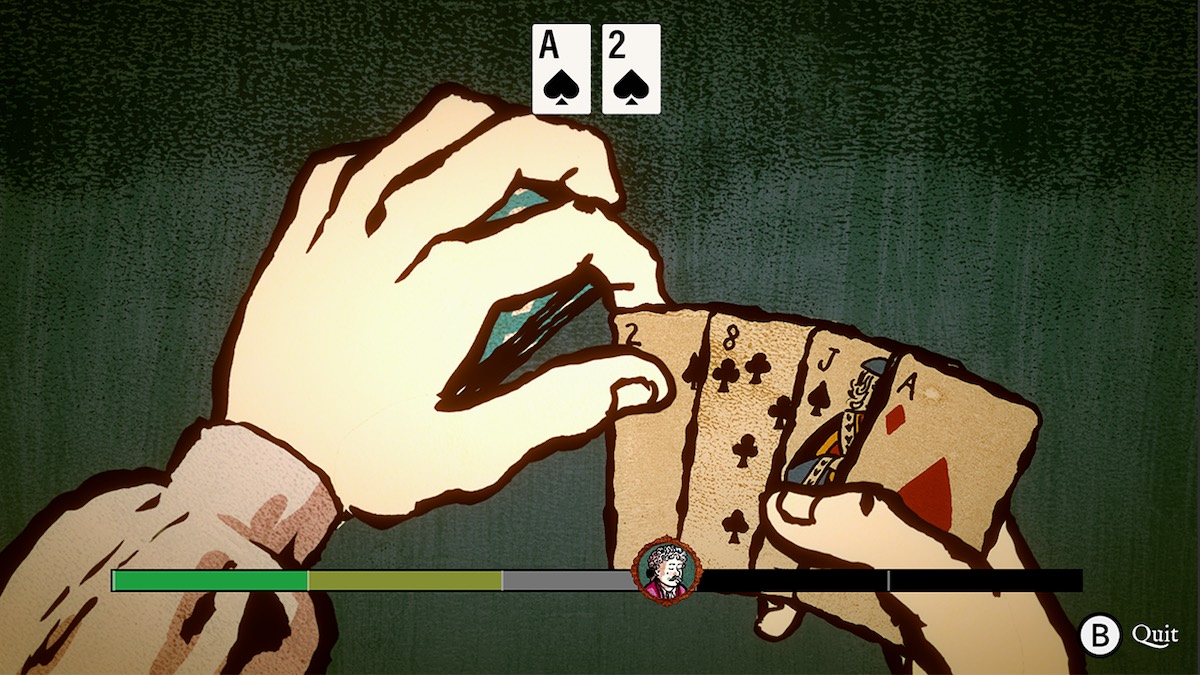 It’s because the game does so well at donning two opposing faces — a trustee guide in one and a sly distraction in another — that these self-imposed mistakes end up pleasantly-emergent moments rather than annoying hindrances. The shrewd, intentionally-secretive delivery may seem like it’s asking too much to begin with, but it’s the way Card Shark embeds this into its presentation — at times how it literally positions elements on-screen whilst asking you to keep track of all on show — that is the most promising aspect and one that will hopefully continue to evolve over time. Combining a collage-like aesthetic and nods to point-and-click adventures, the mere start of why Card Shark is — like any great Puzzle entry — a game you want to prove mentally capable at succeeding at. Such art-style may make proceedings look straight-forward on the surface, but that hasty jumping to conclusions, is precisely the kind of mind game Card Shark is hoping to lure you in with.

Ready to pounce on if one’s time management and reflexes alike are not sufficient. But it’s the fittingly poker-like fogging-over of absolute victory that eventually finds you battling three fronts: your opponent, yourself and just maybe, this still-oblique deception the game may or may not be cooking up. Still I remain undecided if Card Shark is even plotting something against me in its later stages, or whether I — like many of my opponents — am just willfully decrying something foul out of paranoia. And maybe, against my own better judgment, that ends up making Nerial’s Card Shark one game I won’t be taking my eyes off of.