If there’s one thing that we aren’t seeing enough of in games, it’s the big budget title that willingly accepts how ridiculous it is. Yes, there is one glaring example of this in recent memory, but we can set Metal Gear Solid V: The Phantom Pain aside considering that Hideo Kojima’s mind exists outside of all traditional logic. There’s absolutely nothing wrong with games being serious for the sake of telling a good story; titles like The Last of Us show that intense, serious stories can potentially stick with us for the rest of our lives. Still, there’s something to be said about games that fully understand how dumb they are. Character action games, namely the Bayonetta and Devil May Cry franchises, are so over the top and nonsensical that they act as somewhat of a palette cleanser in a landscape of games that often take themselves far too seriously. All indications are that Doom, the upcoming franchise reboot from id Software, is absolutely this spring’s dumb palette cleanser, and that’s perfectly okay.

Let’s make a couple of things perfectly clear before upsetting everyone over at id Software and Bethesda. First and foremost, I’m sure that Doom is going to attempt to tell a harrowing, horrifying story, and there’s absolutely nothing wrong with this. Hell, there’s a chance that Doom’s story will wind up being amazing, leaving us flabbergasted that we ever doubted this long-in-development first-person shooter. The thing is, even if Doom winds up having a serious story that blows everyone away, it’s still totally a dumb game. You’re running around at insane speeds, killing comically freakish demons in Hell, all while witnessing some of the most intense gore the video game world has ever seen. It’s the type of game that seems to be designed for fun and entertainment, first and foremost. Second, and perhaps most importantly, a video game can be both dumb and outstanding. Think about Bayonetta 2, for example. You take the role of a witch wearing a leather outfit made out of her own hair and fight angelic robots with shoes partially made of guns. As stupid as that is, Bayonetta 2 perhaps the best character action game to come out this decade. Doom might wind up being the best first person shooter we’ve seen in years, and that has absolutely nothing to do with how dumb it is. 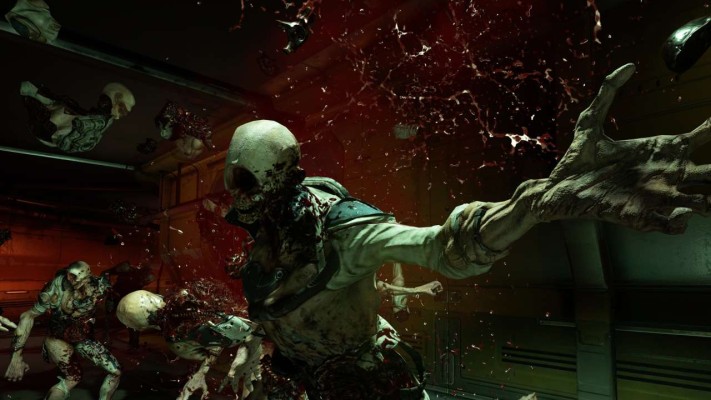 Ponder, if you will, that initial public reveal trailer during Bethesda’s E3 press conference last year. Every time there was some sort of excessive enemy death, the entire crowd seemed to lose its mind in delight. While some members of the enthusiast press suggested that this was a sign of society rapidly devolving into savagery before our very eyes, the more rational reaction to this was sheer bliss at how immediately fun this game looked. Sure, there is definitely some worry that the constant execution animations might feel like a waste of time after a while (especially in a game so predicated on speed), but the content of that trailer instantly shifted the mindset surrounding Doom. What was once a game that everyone thought was in development hell, what with its beta access being tied to Wolfenstein: The New Order, to one of the most anticipated titles of the first half of 2016. Seriously, take a look at the image above this paragraph and try to say that doesn’t look absolutely ridiculous in the most video gamey way imaginable.

What’s the single most important factor to consider when creating a great first-person shooter? If you said story, atmosphere, graphics or anything surrounding multiplayer, you couldn’t be farther from the truth. The first-person shooter, like the platformer or the character-action game, lives and dies by its mechanics. Try to go back and play Goldeneye on the N64 and try and say that game is still as fun as it once was. When a shooter doesn’t feel fluid, sharp and tight, everything else falls apart. Imagine if Halo did not have the rock-solid gameplay that the franchise is known for. We would be poking far more holes into that borderline-ludicrous space opera than we have in the past, and Bungie and 343 (Halo 5 notwithstanding) wouldn’t have received quite as much praise for their efforts. Doom appears to be a title that places mechanics above everything else, and, considering how iconic the original Doom was, it would be an absolute travesty if the result was anything less. 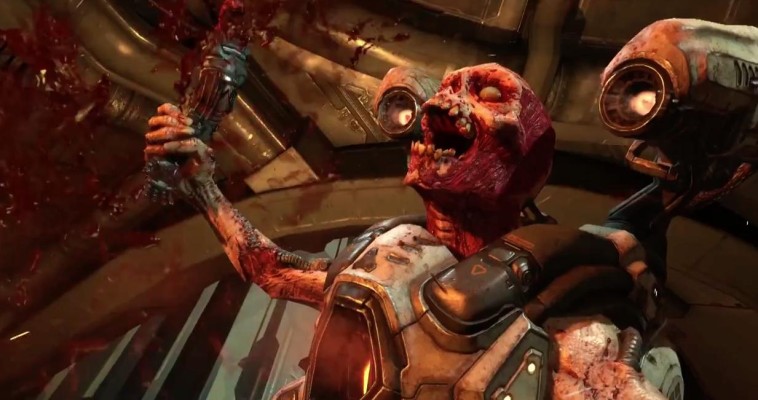 If there’s any image that signifies what we hope Doom will be when it launches on May 13, it’s the one right above this sentence. In case you’re blind (and if you are, how are you reading this?), that’s a skeleton-demon covered in blood with what seems to be a jetpack made of guns. That’s what we want from Doom: sheer lunacy. Sure, throw in the serious story, the epic music and the atmospheric level design; that’s all well and good. In the end, if one of the last big games before the summer lull winds up being the loudest, most bombastic first-person shooters in years, then the world will be a much better place. Let this be a direct message to id Software: the world is hoping for Metal: The Video Game, and we’re going to be super disappointed if we end up playing Butt Rock: The Video Game instead.