Walking through Konami’s E3 booth, it was quite shocking just how much space was dominated by Castlevania: Lords of Shadow 2. The area for the game was a multi-platform castle-themed area that featured at least fifteen demo stations with a continual large line. Outside of that, Konami had a giant enclosure for PES 2014 that seemed underpopulated, plus far too much space devoted to their mobile slate which largely comprised of bored marketing reps. While it could be assumed that this poor space configuration is a sign of an underwhelming line-up, and it sort of is, it was more the result of a booth without an anchor game. Alas, everybody was hoping to get some hands-on time or an exclusive gameplay presentation of MGSV after the extended trailer at E3, but all that was there was a giant wall repeatedly playing the trailer. Castlevania: Lords of Shadow 2  is a marquee title, but hinging a booth on it screams of a second-stringer stepping in for the missing in action star. 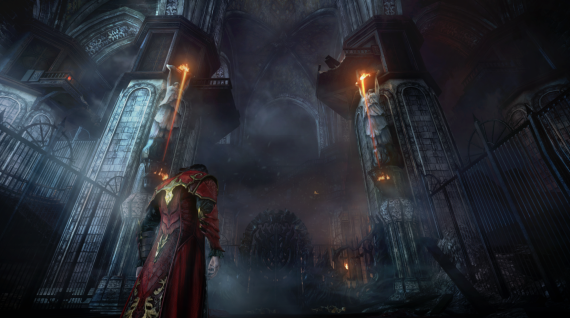 Perhaps that’s why here’s little buzz about the game a week after the show. Watching excited gamers and media step up to the game seemed to result in a lot of bewildered people walking away before the demo was finished. Granted, a lot of that was the result of a part in the demo that tasks you with jumping a large gap without explaining how, but people don’t walk away from an annoying moment in a game unless what came before was uninspired. Castlevania: Lords of Shadow was a solid venture into 3D for the series, and the handheld follow-up Mirror of Fate was surprising apt at carrying forward the spirit of that game, but Lords of Shadow 2 just seemed like more of the same. Taking control of Gabriel Belmont after a lengthy but silent cutscene, players take to a castle corridor to slay demons anyway they can. The game controls well, but the issue is that it’s yet another hack n’ slash where the square and triangle button are mashed with the occasional special move thrown in for good measure.

I was ready to move on to something more interesting when a blessing happened in the form of a fifty story mechanical monster. After temporarily defeating a dual flame sword wielding flying thing, you jump on top of it and have to survive its attacks while attempting to take it down with the help of quick time actions. The large scale was refreshing after the generic castle corridors and seemed very akin to God of War in scale. Hopefully more of these larger than life boss encounters are encountered, as it could elevate Castlevania: Lords of Shadow 2 into more than just a rehash.

The demo of Castlevania: Lords of Shadow 2 was a solid twenty minutes of gaming, but it didn’t live up to the brand-leading status it was presented as and did little to differentiate itself from the previous game. Much like God of War: Ascension, it seems to be a solid hack ‘n slash from every critical point, but is rather soulless and safe. The battle on-top of the giant steampunk-esque robot was quite enjoyable and if the game offers more of these atypical points in level design, it could end up being a great title, but as it stands it seems like simply another hack n’ slash at a conference full of genre-bending games.