I was one of the few defending Wolfenstein: The New Order when it was announced. Many arguments opposing it went viral, with people questioning the need to bring back the dormant franchise and others criticizing Bethesda for focusing on a generic first person shooter. I balked at it all and proclaimed my love for the ’60s-era aesthetic reminiscent of Snake Eater and the fantastic use of Jimmy Hendrick’s “All Along the Watchtower” in the first trailer. Also, death machines. But perhaps my fondness for its aesthetic clouded how actual gameplay looked, as after playing the game at E3, my excitement seemed to wash away as fast as freedom does in the game’s alternate reality. 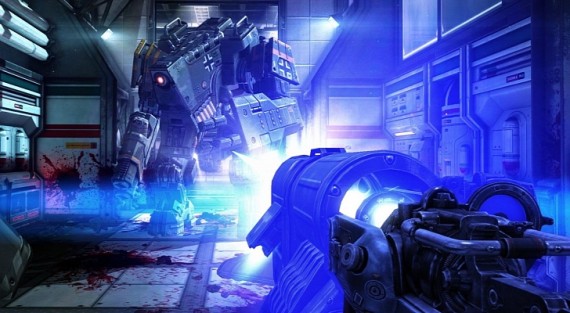 It can prove challenging to get a grasp on a game at E3 with all the (often exaggerated) excitement surrounding it, noise of the showfloor and brevity of the demos, but instead of blasting a few Nazis and being on my merry way, I was able to complete the entire demo while fruitlessly waiting for Bethesda to pull me back for a demonstration only to go back to the check-in counter and be told I missed it (class act, guys). Fear not, though, as I don’t hold any grudges against the game or Bethesda and my opinion was made up when there was still a glimmering hope of seeing more of the game. It should be noted that it took me about an hour to beat the demo; not because it was particularly long (although it was quite lengthy for a showfloor demo), but because of its blistering difficulty that frequently hinges on being cheap. It became comical how many times someone would walk up to a demo station only to quickly die and have the rep suggest they turn down the difficulty. That’s never a good sign, and while balance issues could be worked out before it goes gold, much of the difficulty seems to hinge on the way combat is designed instead of tough-to-beat enemies.

Dual-wielding weapons is a great feeling and aiming feels smooth, but it all plays like an old Wolfenstein game with a new coat of paint. There are no luxuries like grenades or regenerative health, making it feel like a pre-Halo era game at times. Granted, there’s an over-reliance on regenerative health in games, but the mechanic allows for areas to be more difficult. Wolfenstein lacking the feature makes walking into a room and being torn to pieces with little option for retreat a common occurrence. Comprised of tunnels, corridors and aircraft hangers, environments seem bland, but there were a few standouts including a Nazi museum with a giant destructible moon in the middle. One positive aspect is a constant reliance on puzzles to get to the next area, breaking up the action and forcing you to use your noggin. There’s also a neat secondary weapon that shoots a heat laser out that allows grates and other metallic areas to be cut like Swiss cheese .

Wolfenstein: The New Order is far from a bad game, but it’s a very generic one. Granted, we only saw about one minute of story, but whatever gameplay isn’t monotonous seems archaic. At this stage, things are far too unbalanced with enemies ripping you apart in seconds and forcing the game to be played crouched in hiding. As the marketing rep stated, “people rarely have the patience to finish the demo,” and there’s a good reason why: it’s frustrating. Perhaps having the full story, tone and more varied environments will enhance the combat, but as it stands, it’s shooting Nazi machines a billion times hoping that they blow up so you can finish the game and move on to something more exciting.