Shown for the first time during last night’s Sony PlayStation E3 2015 press conference, Horizon Zero Dawn is an open-world action role-playing game coming out exclusively on the PlayStation 4.  It has a few similarities to the Tomb Raider franchise in that there’s a female protagonist with a bow (though this comparison is similar to comparing Dead Space to Halo because both star space marines), but that’s about where the similarities end.

Players take the role of an inhabitant on this new land in the distant future, 1000+ years from present to be exact, where nature has completely reclaimed the land, where humankind is no longer the dominant species, as the machines sort of run the show. Horizon Zero Dawn‘s main protagonist, a skilled hunter named Aloy, is set out to explore a bright and beautiful world inhabited by dinosaur-esque monsters made out of machine parts.  The team behind the game is the one and only Guerilla Games, the developer known for the Killzone franchise.  Building large and lush worlds was a nice change of pace for the team at Guerilla,  as it had gotten very good at building things made out of grey steel, and what a vibrant world the developer have created.  With this title the team has taken a vastly different and unique direction, and the game asks some serious hypothetical questions.

What happens when humankind is no longer the dominant species?  How have the machines become autonomous? Where did they come from? Why are they here?  These are some of the mysteries players will aim to learn in Horizon: Zero Dawn. 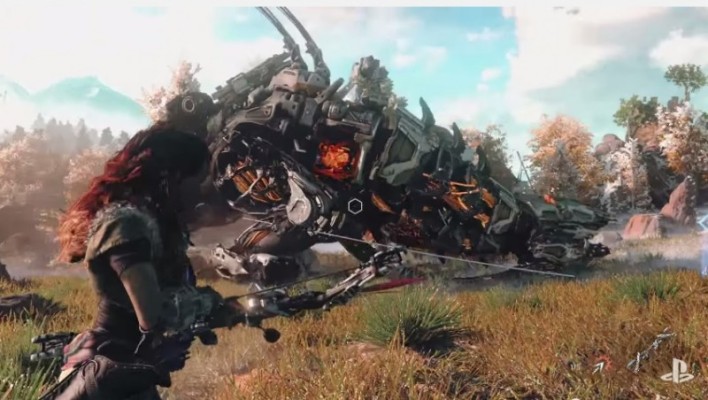 In order to answer these questions, the gameplay will be centered around exploration; if you can see something on the horizon, no pun intended, you can go to it and check it out.  There are organic animals as well as mechanical ones, and there are primitive tribes as well as fully evolved human civilizations.  Aloy will have to be smart and agile before, during and after combat to maneuver her way through the world.

While one key focus is around theme of nature vs advanced technology, or primitive hunter vs a gigantic mechanical creature, the premise is far more dynamic than “here comes a big monster, shoot it until it dies.” The combat merely builds upon what was seen in Killzone, but is taken from a third person perspective and brought to new levels through the use of Aloy’s robotic weapons, primarily her bow and quiver of trick arrows like the explosive and rope arrows.

There is currently no release window set for Horizon Zero Dawn, but from everything we’ve seen so far, it’s going to be worth the wait.