Originally developed as part of the Dare to be Digital 2014 game jam, developer Overly Kinetic’s Chambara is a first-person local multiplayer indie game built with Unity Engine that uses a binary color scheme. The game is pretty simple, but the rules determined by the game’s two primary colors (often black and white) can make for interesting bouts of strategy and fun. The binary color scheme and the game’s name are both a result of inspiration from acclaimed animation series Samurai Jack and Japanese “chambara” (or “sword-fighting”) samurai films. When I sat down with it on the show floor, it was nice to see how much thought can go into how I played it, thanks to its color scheme and its namesake.

Chambara is a local split-screen multiplayer game with up to four players, ideally playing from the couch. The game is in first-person but there are no guns, the only weapon available is a sort of nightstick that can only be swung once at a time. However, one hit from the nightstick is enough to kill so the match comes down to an elaborate cat-and-mouse. The most important mechanic is the ability to hide in plain sight within one of the two main colors on every stage, in my case: black and white. There are two teams, often a black team and a white team. In my experience, players each take up the role of an anthropomorphic crow that is either entirely black or entirely white, based on what team they are on. Although black and white are not the only colors people can be, there are only ever two teams with two different colors. As you may have guessed, you can blend into the parts of the map that are the same color as you. As a result, careful maneuvering and planning can make or break your chances of success. 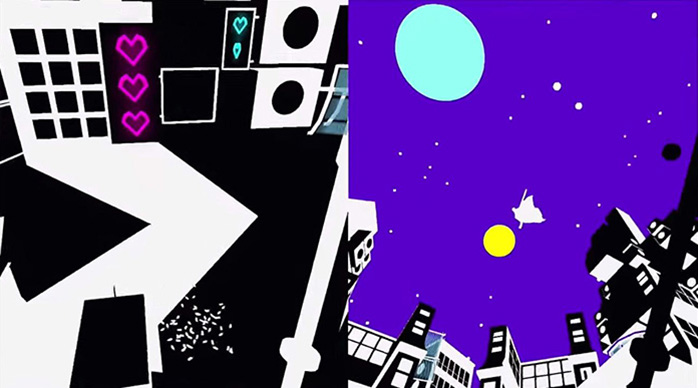 Players do not have many tools in their arsenal, there is a fairly high jump distance in this game, but the higher the jump is the more risky it becomes. Aside from a modest swipe of the nightstick, the only other form of attack is to dash forward and then strike. The dash and the normal strike are both governed by a cooldown, while the dash length is determined by the amount of time the dash button (in my case, the right trigger) is held down. The dash can be used in any direction, so it can be used to zoom in the air as well. Needless to say, the dash is very satisfying and it is difficult to resist the urge to use it even at close range. But that’s it, the only way to kill members of the enemy team and win the round is to get up close and hit them. To mix it up, the maps themselves are not flat. Though they are surround by a high wall or structure, the maps are usually populated with little structures to jump on and lean up against. There is a vertical nature to the maps that encourages some elaborate, Assassin’s Creed-style stalking. I found myself holding still, looking for an a disturbance in the borders of black and white. When I saw movement, I would dash at it, striking true and retreating into the proverbial shadows immediately after since each kill leaves a bit of purple and a pile of feathers strewn in its wake.

After a few kills and a few deaths, I found that Chambara owes very much to its 3D environment. Being in a three dimensional space puts players at constant risk of being discovered since the more advanced maps do not have such liberal and divided coverage of black and white. This means that often times, especially when stalking prey or re-positioning, I was visible at one angle when I thought I was hidden in all angles. Even careful players can get taken out when they least expect it this way, due also in no small part to the speed and distance of the dash. Hearing a kill, finding the purple and feathers it left behind, tracking the survivor and hoping they’ll slip up while staying weary of my own exposure was one of the common scenarios that made Chambara very easy to get into.

Interestingly, there were oddly placed streaks of white and black throughout the maps. The some dashes of white ran up and across walls, implying the possibility for some tense air interceptions. Advanced players could very well get anyone, anywhere, without being seen, especially once they have become familiar with the map layouts. 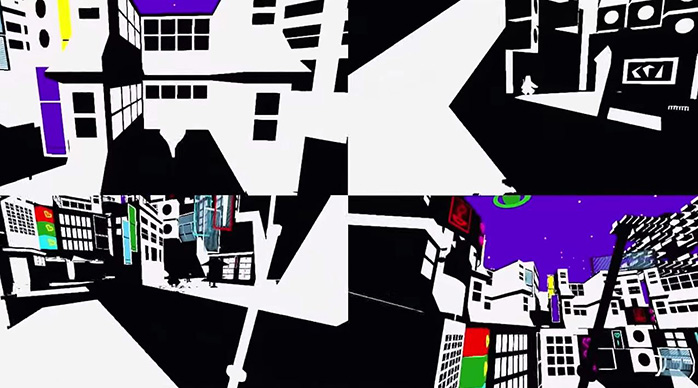 Simple but intriguing, Chambara looks like it will shape up into a nice diversion for friends on the couch, especially since players can close or squint their in-game eyes to cover the screen in a single color and prevent screen-looking. Whereas there isn’t that much to it, there is certainly enough so far for a few quick, satisfying rounds of stealth and ambushes. It is a shame however that the game is currently only available on PC, with hopes of bringing it to consoles later on. The game is local multiplayer at the moment and fits much better with a console setting, or at least in a context where the machine it’s played on is hooked up to a TV with controllers for four people. That said, the game is also significantly less interesting with just two people for an entire match, and there is a learning curve involved in getting to know each map. Right now, a short session works best as long sessions of play can quickly wear thin due to how simple the game is at this stage. It will be interesting to see just where BAFTA-winning developer Overly Kinetic intends to go with Chambara.