There’s something about non-simulation style racing games which has made them popular once again. As someone who can’t make heads or tails of all those highly realistic releases, this is great news for folks like me. One such game making itself known goes by the name of Distance. You may just recall the title as this was actually a successful Kickstarter campaign way back in 2012. Since then, they’ve hit Steam Early Access and continued to tweak the beta experience toward a final build. In an exciting move, a hot new E3 build was on the show floor which warrants much more attention than it has achieved thus far.

Here’s the basics of Distance for those unfamiliar with the title. Basically, it’s an arcade style racer although you’re not actually required to compete against other cars for the best time. The adventure mode is based upon the excitement of racing with a super slick, fast car and powerful boost function. Multiplayer modes allow for typical racing style, but were not on display at the show. Given the arcade gameplay, it’s also incredibly forgiving as far as turns are concerned. Figuring out timing for turns isn’t necessary, as even bumping against walls usually leaves your car intact. It’s only with far more outrageous crashes (and obstacles) which rip the vehicle to shreds. Literally. 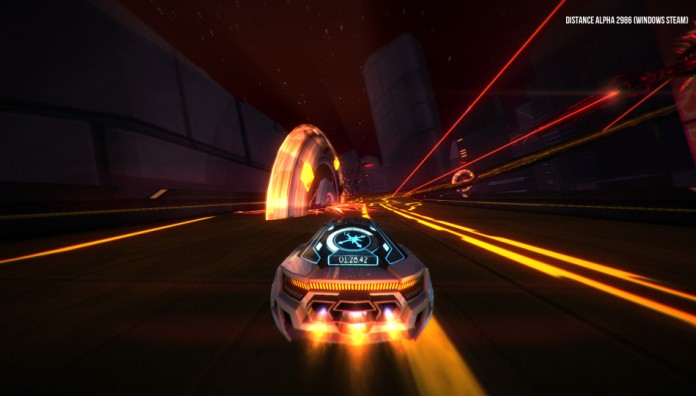 One of the most awesome aspects of Distance is seeing how it creates action and engagement without forcing other racers onto the field. An example of this is the lasers which appear on some stages. Run your car through a bright red beam and you’ll find that part of it has been completely sliced off, with molten orange metal where that part of your vehicle used to be. It’s absolutely ridiculous when you eventually drive through rotating fields of lasers, some of which seem absolutely impossible to avoid. Those leave a tiny sliver of your car left which is both hilarious as it is surprising. Luckily, as long as you don’t careen off the track the other parts will regenerate back after a few seconds.

Another exciting aspect is your vehicle is capable of flight (and is in fact required to in some sequences). Flying adds a new layer of racing to the experience, as does abilities such as driving on walls and ceilings when inside cylindrical tunnels. Everything just feels tuned to get players’ adrenaline pumping by the simple act of driving each new track. This is facilitated by gorgeous futuristic design which is painted over every inch of Distance. From the car itself to levels, each aspect seems pulled from an immensely cool future. The colors, while often subdued, stand out when necessary with bright flourishes. 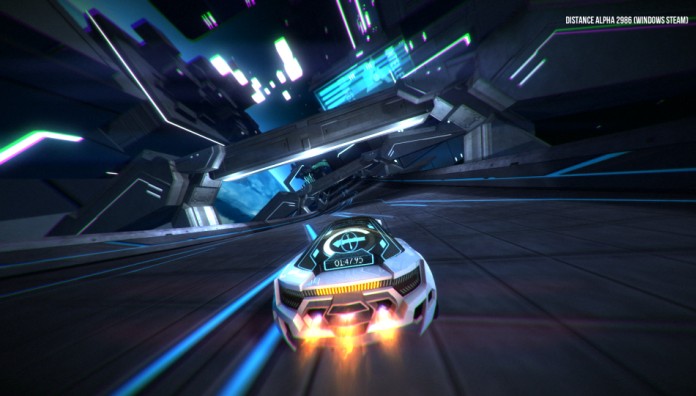 For me, I just want to know more about Distance and continue playing. From the brief multi-track demo provided, it gave a taste revealing that this game is actually more than just an arcade racer. There appears to be some form of storytelling going on, although it’s hard to discern what is going on just yet. Mixed in with that is a superb feeling of surprise with permeates the entire gameplay.

At many instances during the demo I found myself tremendously engaged, almost enough to inadvertently comment out loud about everything going on. Heck, the folks watching as I played ended up doing that for me, with excited shouts in disbelief of what they saw. Distance is one heck of a weird racing game, but it features enough core mechanics to be immediately compelling. Its intriguing adventure mode is what really pushes Distance over the edge to be worthwhile for those who don’t typically care about the genre. Look out for it later this year on PC and PS4.