If there were a beautiful paradise where the laws of physics do not apply and modern military technology allowed one man to level an entire island, that paradise would be called Medici, the setting of Just Cause 3. Featuring an angrier main character in Rico Rodriguez, Just Cause 3 has the player fighting to liberate Medici from General Di Ravello’s dictatorial rule by destroying everything in glorious, over-the-top ways. With so many open-world games about some sort of objective, whose bulk of content and activities are toned down to favor a story or mission-driven structure, senseless and absurd violence is something that has surprisingly been missing. Such wanton freedom and destruction plays a vital role in keeping the power fantasy alive. Games are meant to be fun, and at times, crazy unhindered fun. But with so many open-world games that are inherently about freedom but have so little in way of gameplay options, it seems that we are nearing the risk of losing sight of one of the most basic aspects of open-world and sandbox games: player-generated rules of engagement.

Too many modern sandboxes put a huge emphasis on playing by established rules, funneling the freedom and chaos that comes with an open-world into corridors of story and missions. While not a bad thing, this is almost forgetting that a sandbox is a player’s playground. Just Cause 2 was a game that embraced this with some clear and defined mechanics, it built off a grapple hook that allowed Rico, and the player by extension, to perform virtual feats that would be unheard of in so many other games of the same genre. 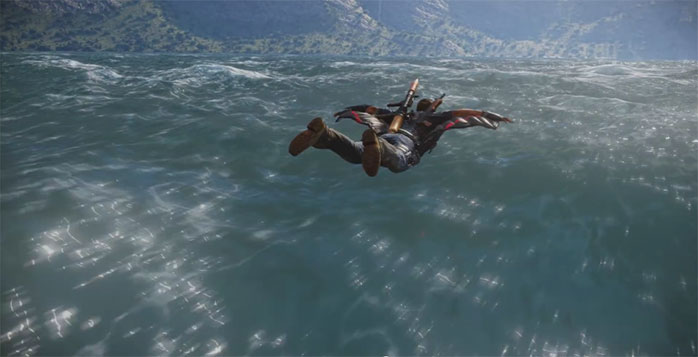 Just Cause 3 follows the same philosophy as its predecessor, using the grapple hook to laugh at Isaac Newton as Rico zips great distances between airborne objects and annihilates them in a flurry of fire and twisted metal. This time around, there are even more ways to wreak righteous havoc. For example, when taking down a statue of Ravello, players have a great range of options from simply blowing it up to attaching tethers to its hand and face so that it will literally smack itself into pieces. To destroy an oil facility, players might detach one of the spherical structures so it will tumble into the rest of the buildings and crush them. To assault a communications relay, players can go guns blazing, use a jet, or use their grapple hook to zip from place to place like a ninja, setting C4 charges all the while. The developers at Avalanche Studios have intelligently realized that Just Cause 3 should be about a particular kind of sandbox freedom that lets players actually play around with their sandbox. This results in an open-world game for players who know what they want from it. In my case, for example, it lets me do as many awesome stunts as possible while flying around like some sort of superhero. This is important when I have so much power at my fingertips, and so much to use it on. So naturally, the quickest and most colorful way of turning that potential into a game is to let players loose on the sandbox, using missions and rewards as guidelines rather than rules.

Added care has been given to push the physics-defying stunts from the previous game even further. Rico now has access to a wing-suit, and as long as he grapple-hooks things to pull him further forward, he can stay airborne more or less indefinitely. Like Superman. The new tether can be used in creative ways too. I saw Rico tether an enemy solder into a helicopter, which sent that poor fascist flying into said chopper. Rico then followed up with tethering that helicopter into a nearby gas tank. Ka-boom. Now imagine doing this while swooping through in your wing-suit and using your grapple hook to get out of the way of the explosion. This is the kind of freedom Just Cause 3‘s sandbox allows, an old kind of freedom all too many of our high-budget open-world games have been lacking. This is the freedom of the power fantasy that comes from being the player in a sandbox. 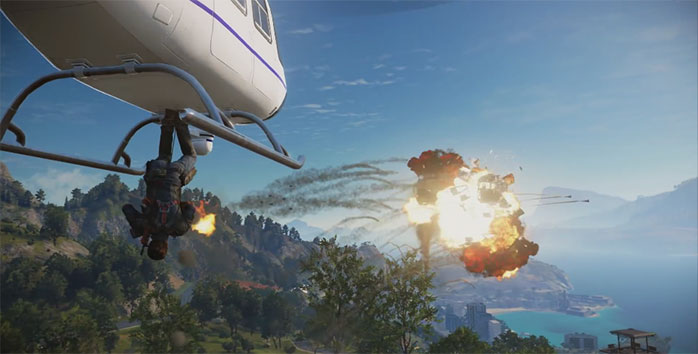 Even though it’s basically about being awesome, Just Cause 3 does not skimp on the visuals either. Medici is pretty, with plentiful fields of flowers that react to things going through them, and of course shiny explosions. Sure, there aren’t many people and the shadows could stand to be better, but Just Cause 3 is not there to simulate a thing. Unlike other recent open-world games, it adheres to the simpler idea that a sandbox needs to be fun and free, first and foremost. It looks to offer exactly what I want it to: destructive freedom and design that supports said freedom. As such, it serves as a brilliant example of what many sandbox games used to be, and what some should still try to be, especially given all the new technology and wonders made possible with modern hardware. Sometimes, a body just needs to sit down and see how many important structures he can blow up while staying airborne. That kind of senseless, hilarious violence is what high-quality sandboxes can still be about, and what Just Cause 3 rightly intends to preserve and revolutionize at the same time.

With enthusiastic mod support and a forward-thinking development team that wants to bring players together to create an insane game full of unthinkable chaos that they orchestrate, Just Cause 3 is on the right track. We need more open-world games like this, so here is me hoping Just Cause 3 shapes up to be just the aided destruction power fantasy I want it to be when it comes out on PlayStation 4, Xbox One, and PC on December 1. Hopefully then other developers will see the light of its enormous explosions and follow suit, ushering in a new age of stupidly mind-blowing virtual feats in games the likes of which we can only imagine.