Okay, a little clarification on that title. I was able to play through a small chunk of the upcoming free-to-play PlayStation 4 title Let It Die. I did not feel up Mr. Goichi Suda, as much as some people would have liked me to. What follows is a transcript of our conversation as I played:

(My character spawns in a derelict amusement park park, sans clothes, save for underwear and a gas mask.)

[Hardcore Gamer] So, I’m only wearing a gas mask and underwear…

(Using R1 and R2, I promptly attacked the first enemy barehanded. He went down in a shower of blood.) 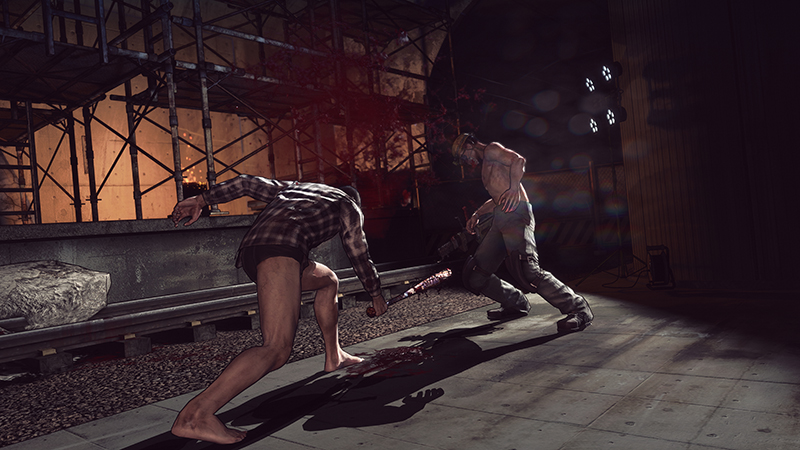 What are my hands made out of? He exploded!

(Laughs) So, they your character looks human, but he’s not exactly human. There are a lot of mysteries in the town you are exploring. Trials and experiments that are going on. So, with that, you will definitely find out what it is as you go through the game. But, you’re not just your average human. But, you know this is a Grasshopper game…

I know. I’m intentionally being silly.

So, for E3, at my direction to the development team, we increased the bloodshed by 150%. (Laughs)

(Not paying attention, I shamefully died. A continue screen pops up.)

That is the insurance girl. She lets you continue.

Oh, man. I was not playing well.

(Playing through, I make use of a magnum to take down distant enemies. One gets close. Switching to a buzzsaw, the hapless fool is quickly reduced to a quivering puddle.)

(In English) Oh, nice! You realize that can be charged up, too? It’s stronger.

(Moving through the level, I find a shirt and pants.)

(Laughs) Oh, you can crouch and pick that up. (He points at a frog on screen.) You can eat it or save it for later. (The character devours the frog whole.) There you go. You’ve recovered HP. You can eat frogs, and rats, and other creatures to stay alive. Wait, if you hold triangle and then attack, you can do a special. (I pull off the move. The enemy explodes even more than usual.) YES! 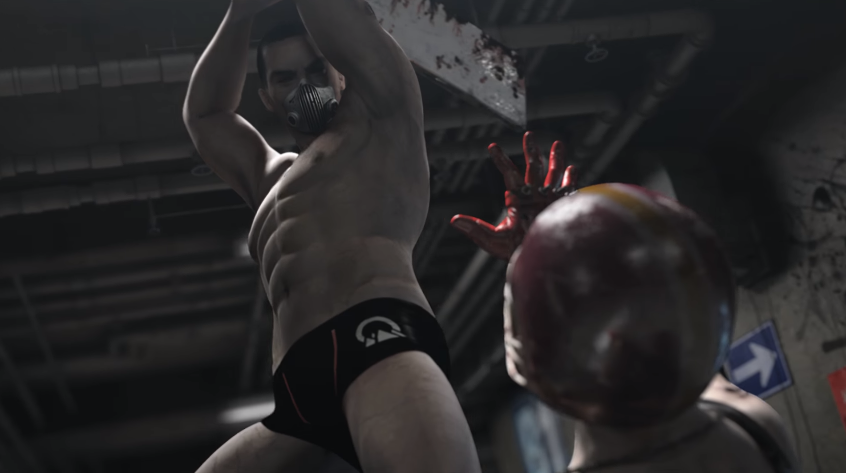 Thank you. I’m glad to hear that. Of course, when we first announced it as a free-to-play game, there were a lot of concerns. There are a lot of people saying a lot of negative things about being free-to-play on console. But after we revealed it at PAX in playable form, a lot of people had similar comments in that it does not feel like a free to play game. We’re trying to make sure that we don’t fall under the stigma of it being casual or not fun; being pay to win. Many people are understanding after playing that it’s a free to play game but it’s still fun.

(A boss shows up, bristling with mannequin parts popping out of his back and arms. Large and aggressive, the creature roars and attacks the protagonist is gruesome fashion.)

This is definitely one of your games.

(The creature continues its charging movements. It keeps stunning itself by running into walls. I attack with heavy strikes from a pickax, slowly whittling it down. A PR rep advises me that I am running out of time.)

(Laughs and gives me some advice to finish the boss quicker.)

There’s not enough blood there. We’ll have to fix that. 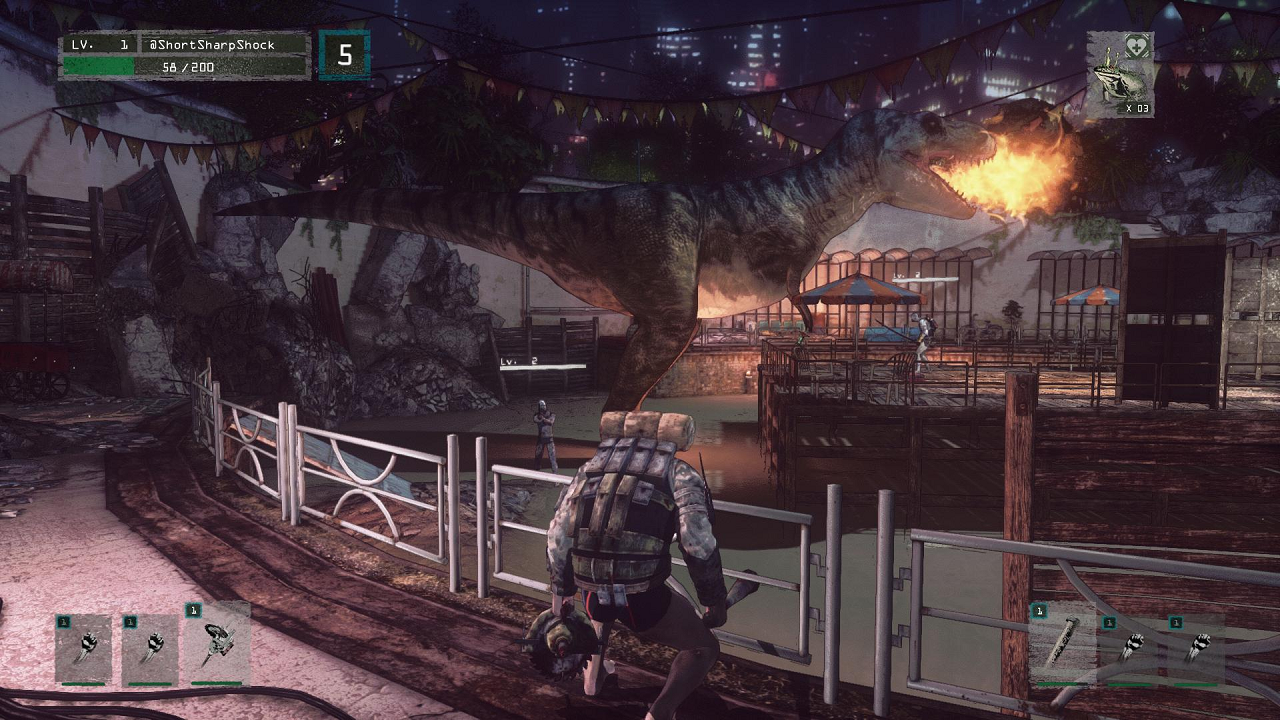 So, are you a Troma, or Toxic Avenger fan?

It’s a movie studio. You remind of them except you are more polished. (I was thinking, here, that this question would score me points with Suda. I was wrong. Panicking, I ask:) So, what do you watch?

Are you familiar with Violence Jack? I get a lot of inspiration from there with its post-apocalyptic, violent world.

There is other stuff that makes its way out here, like Helldriver. I don’t know the Japanese name…

(I show him a picture on the phone. Suda squints, takes my phone, and moves it. His translator explains that he has a hard time seeing due to the state of his eyes.)

Ah, Yoshihiro Nishimura! Yeah. He makes a lot of things that are quite violent. 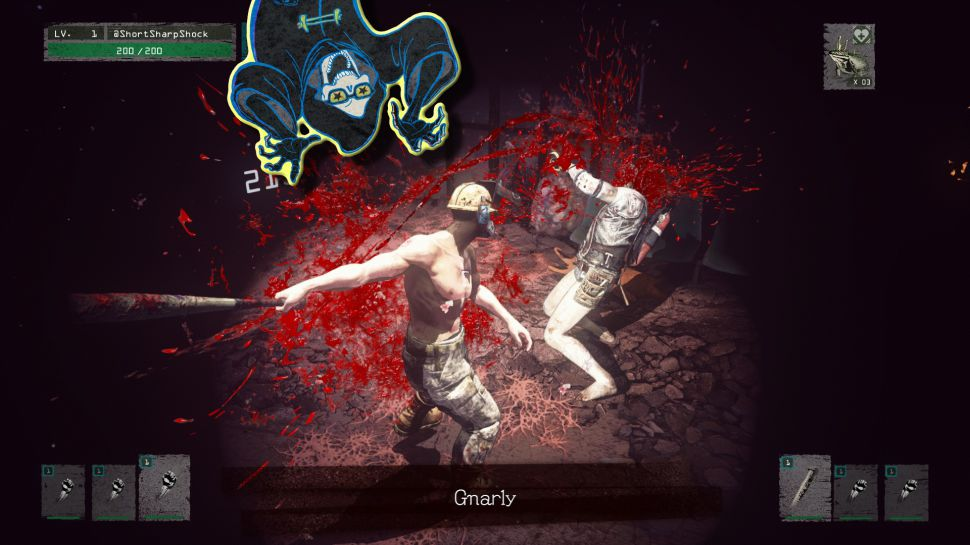 So, I know we are running out of time, but I wanted to ask. I really like these games, but have you thought about going back to something that is more in line with Contact? Something lighter, more kid friendly with your touch? You know, with explosions of petting, like kitties, instead of blood?

So, for Contact, I wasn’t the main director. But, making a game for a wider audience, something for children to older people, is something I’ve thought of. I just haven’t had the timing or opportunity to start on the right title.

Yeah. I like this, I’m just curious to see what you would do if you got to do your own family title.

So, if I got to do anything that I would want to do, it would be along those lines. If I had the opportunity…

I really thank you, and I know that they told me that I had five minutes left about ten minutes ago, but is there anything you would like to add before I go?

So in regards to Let It Die, there’s a lot of new things, new challenges that we are trying here, with online elements, single, and multiplayer. Of course, being a free-to-play game is something different, something very new that we are trying to do. We hope it works out for everyone and everyone gets a chance to play it. With it being free-to-play, it lowers the entry level so that we can reach a wider audience. Also, compared to other games, it’s not as story driven. As you play, though, you will start to see more story elements, things that we are known for. We really hope people continue to look forward to the game’s launch, support us, and continue to support us after the game launches. We will have more to show at PAX West. People can also look forward to another title that we haven’t announced, too. We’re always looking forward to making making something new.