It was back in 1990 when gamers first got a taste of River City Ransom. Since then, there have been a bevy of releases (though many were left as exclusives in Japan). What’s a modern-day River City fan to do? Well, aside from snapping up Virtual Console releases, there is a brand new game on the horizon. River City: Tokyo Rumble is charting a path for 3DS on its thirtieth anniversary. So, what’s this latest iteration all about?

In many ways, it follows along the same classic gameplay that NES players first fell in love with. River City: Tokyo Rumble is still primarily a 2D beat ’em up with RPG elements tied in. Players meander about the city, fighting enemies with their fists or objects on the street, and taking part time jobs like any typical high schooler. The main story mode is not the only thing on offer here. Given the portable nature of this release, there are also two additional modes: 4-man rumble and dodgeball.

Dodgeball is all about hitting people with balls, as you might expect, and is actually quite tough to succeed at. In the demo, it felt like everyone would only target me! On the other hand, the rumble mode offers a great opportunity to bring the digital beat down to your buddies. This is all handled by the 3DS’s Local Play option. However, you can also give them a sample of the game via Download Play which only requires one person to own a copy on their 3DS and beam it out to other local players. Of course, the main allure of River City: Tokyo Rumble is working through the story mode rather than these simplistic additions. 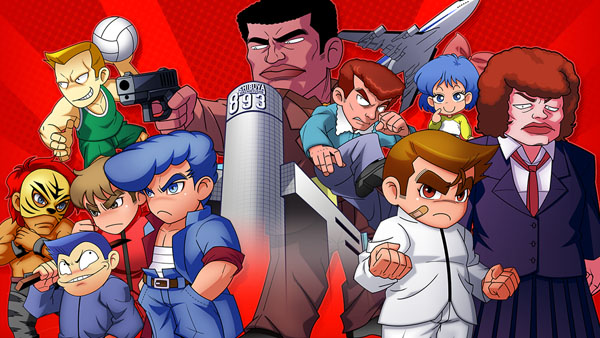 As far as gameplay is concerned, the game feels like a pure beat ’em up that fans are probably expecting. As you walk left and right, dudes looking for a brawl skitter out from the screen edges. Defeating them is simple enough and leaves most of player choice up to how they want to dispense of these guys. Maybe one drops their baseball bat, or you simply find brass knuckles on the ground and pick them up. Heck, you can even pick up a downed baddie and smack him into another enemy! There’s nothing serious about River City: Tokyo Rumble and that sense of humor is definitely appreciated.

River City: Tokyo Rumble does not have a release date just yet, but expect to see it launch later this year. Luckily for 3DS fans, they’ll have the option to pick this one up as either a digital or physical release. Those who opt for the retail version will even receive a free keychain for their devotion to the physical medium (though of course this release will cost more than the Nintendo eShop edition). It seems we can always count on Natsume to bring bonus goodies to their boxed games.