Life is absolutely awful at the start of A Plague Tale: Innocence. Taking place in a fictionalized 1349 France, things are especially awful for the sister and brother duo of Amicia and Hugo. Not only must they grow up in an utterly inhospitable, plague-ridden environment, but they must also deal with the fact that they’ve effectively become orphans overnight. Their mother seems to have been taken away – either that, or she died in secrecy. Of course, the children aren’t ready to give up hope and seek her out.

Since you play as children characters, don’t expect either of them to show off extreme sword-fighting skills or anything like that. The best they can really do is use a sling shot, hide or distract. A sling shot isn’t exactly deadly weapon, though, unless maybe you fire off an extremely good shot with a sharpened rock. A Plague Tale’s gameplay takes these conceits and focuses its concepts around them. So, expect a bit more of a stealthy and puzzle-based approach than one full of quick action. 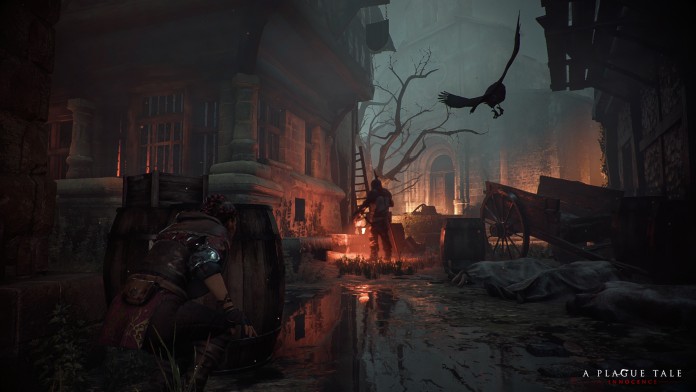 As the Black Plague rages, people have come to rightly fear rats which carry the disease. But even fans of rodents will likely find A Plague Tale terrifying due to the massive swarms of rats depicted. At times, they honestly appear like a huge rat-wave ready to eat anyone in their path. Rats – and their apparent aversion to bright lights – are a key component of this title.

Here’s an example of what this means. Our duo might need to get to a certain location, only to find it blocked by nefarious folks. A sling shot isn’t enough to distract them. However, these dudes are surrounded by rats and have only a small lantern to keep them at bay. If you can shoot out their lantern then the rats will swarm in to distract (and kill) them. This leaves the path rat and enemy free. Sure, it’s a little dubious for children to participate in killing second hand, but they’re doing so in the name of saving their mother. 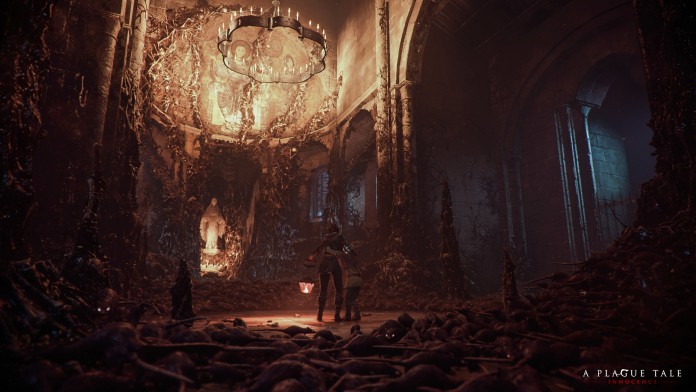 The children also need to be careful about light. In instances where rats are blocking the path forward, you’ll typically need to solve puzzles which relate to getting them access to fire/lanterns/etc. So far, this might just sound like a really extreme take on the Black Plague. There also appears to be something mystical or otherworldly at play in A Plague Tale as well, but it’s impossible to know how far that goes just yet.

Fans of dark storytelling will likely be intrigued by A Plague Tale. The focus on more calculated gameplay between the siblings rather than all-out action fits the theme quite well. It’s hard to not want to help these children through nightmarish circumstances, even though it feels like everything won’t have a happy ending. Of course, we won’t know how it all ends until A Plague Tale: Innocence launches for PC, PS4 and Xbox One in the near future.