When I think of big cities such as Los Angeles, all kinds of things come to mind. Now, after playing Donut County, another concept crops up – the idea that at any minute everything might just get swallowed up by a comical hole in the ground. Donut County is a new slightly puzzling action game which puts players in control of a cartoon-styled hole. You know, the kind that would be right at home in a Wile E. Coyote and Roadrunner face off. The game hardly has to instruct players about what to do with control of this hole. It’s obvious that they should seek to make anything and everything fall into it!

That’s exactly what you do in Donut County. Initially, the hole is tiny and can’t fit much of anything inside. However, there is always at least one thing on the colorful, cluttered screen that will fit. At this point, the hole grows slightly bigger. From there, it’s a matter of scoping out the environment in search of incrementally larger objects which expand your hole even further. In a way, there’s a comparison to be made with the Katamari Damacy series. However, it’s almost the exact opposite. Instead of accumulating objects to take up more and more space with a huge ball, you’re seeking to remove elements from the world and increase negative space. Or something along those lines. 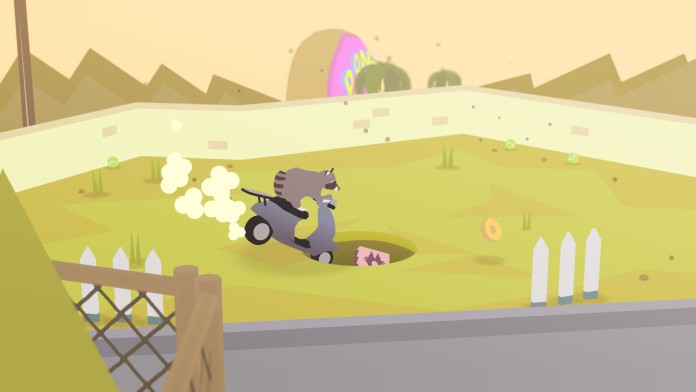 It might sound like a simple concept, and that’s because Donut County really excels in its simplicity. With that said, there are still some challenging moments to be had while playing. For example, you might need to solve small puzzles in order to figure out how to trigger an event to occur. In other instances, objects that might initially seem too large for the hole simply need to be tilted at the right angle to tumble down. There’s also a simple joy of rapidly gobbling up boulders, chickens, everyday citizens spinning at a pottery wheel, and buildings with ease.

Does it sound like a dystopian nightmare? Maybe in theory, but the visuals ensure that nobody is left feeling too glum while playing Donut County. The world on display here is full of bright, happy colors and cute anthropomorphic characters. When something falls into the hole it also doesn’t die/disappear. Instead, in between levels you’re greeted with “Beneath Donut County” sequences. These show off the (slightly annoyed) townsfolk continuing to live within or underneath the hole. All is well, even if everyone’s lives have been uprooted due to the whims of a strange, wandering hole. 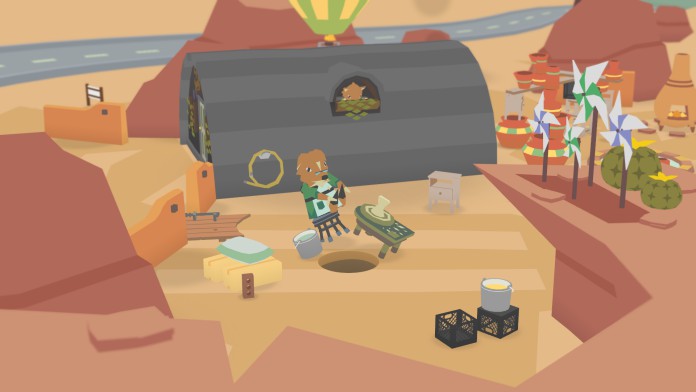 With great visuals comes a soundtrack that’s also completely on point. The tracks give off a really chill vibe that also feels L.A. inspired. The adorable artwork, music and gameplay mix together exceedingly well and ensure that folks will want to play through Donut County for a few hours in a single sitting. It makes sense for this to be a shorter game as at some point the charm would wear off. You’d also run out of things for the hole to consume. It just doesn’t make sense anymore if you’re swallowing up the entire Earth and surrounding galaxy – unless it was some odd black hole all along.

Donut County is coming soon (unfortunately no exact date is known just yet). Whenever it does launch, expect to see it hit Windows and Mac PCs as well as iOS. More platforms might also be in the works, but that’s also under wraps right now.