SMACH Z sprang to life thanks to a successful Kickstarter in 2016. Its promise of on-the-go PC gaming was lofty – but definitely doable. Things like the GPD Win and its successor have shown that it is possible to have some measure of PC gaming in a compact device, but there have always been caveats. With the GPD Win units, finding a form factor that worked while maintaiing compatibility with all manners of PC games was a struggle. The dual analog stick setup worked, but the tiny keyboard didn’t do much for anyone. The stick placement also left something to be desired, as it didn’t allow for easy stick-to-face button movement as the right stick was to the right of the face buttons.

Hardcore Gamer had a chance to chat with SMACH Team at E3, and we learned a lot of valuable insight about the upcoming SMACH Z device. The basic version has 4GB of RAM and 64 GM of storage – you can add RAM either when you buy it or after you buy it with off-the-shelf RAM. There are also plans in place to allow further hardware upgrades if Intel or AMD release better chipsets. You can also just replace the motherboard – it will just clip on, and won’t be soldered into the device. USB-A and USB-C ports will be featured alongside a display port. Weight-wise, it seems like it will be around what the Switch is. The battery life is aiming for about six hours, and it will support fast-charging and allows users to have a couple of hours of playtime quickly. The USB-C port will allow it to charge as well.

The resolution of the screen is set to be 1080p and it will be a touchscreen – so it will be ideal for menu navigation as well as bringing the best of a tablet-like device to it. A dock will also be used and allow playback on a TV or a monitor. GTA V, PUBG, and Fortnite are set to work on it and will support keyboard and mouse as well. It is fully Steam-compatible, and will run a full version of Windows. The device’s price starts at $699 and it does offer a fair amount of power compared to something like the Switch. The price itself may be a downside for many, but it does offer up full PC game compatibility in the palm of your hands – with the haptic controls acting as something akin to the Steam controller to enable some level of controller support for games not originally designed with it in mind.

With it being a portable PC, you can tinker with in-game settings to get a better result. There are three versions available – with one costing $699, one costing $899, and the third costing $1,099. $699 gets 4 GB of RAM and 64 GB of storage, while $899 nets you double the RAM and storage alongside a 5 megapixel camera. Spending $1,099 gets you the same 5 MP camera, but doubles your RAM and storage. There’s a lot of versatility when it comes to the pricing, and the best overall value for the dollar may wind up being the $899 version, as it’s under the thousand dollar threshold, but still gets you solid performance. When it comes to a gaming device, you don’t really want anything under 8 GB of RAM if you can avoid it as that will definitely hurt the kinds of games you can run – and with the SMACH Z starting at $700, you’re going to want to set aside a fair amont of money for it anyway. 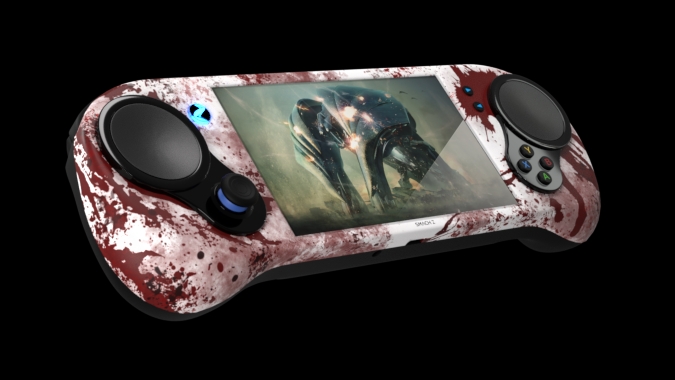 A variety of colorful shells will also be offered up at an additional cost of around $40 – including blue, white, red, neon green, gold, and zombie – which is a white and blood-stained color that will definitelty stand out. The team at SMACH Z is only three people, and it’s impressive to see such a small team create such a useful device. It’s a very user-friendly and if you want to go with a lower-end version, you can still double your storage or increase it even more with a micro SD card. All versions of the SMACH Z are set for a Q4 release – and a final release date will be announced later this year at Gamescom. We’ll definitely be keeping a close eye on it, as there is a lot of potential for this kind of device to succeed in the niche marketplace and perhaps turn people on to PC gaming who otherwise avoid it due to the bulkier hardware that is usually needed to run PC games.