For nearly 20 years, the Ghost Recon series has provided some of the most engaging tactical combat on the market. Now, you and your team are stuck behind enemy lines without a plan of attack and minimal resources compared to prior entries. With Wildlands going for a more open world and alienating some fans, the developers decides to focus on bringing things back to the core combat and increase the strategic elements. Things like running too quickly can result in you getting tired more quickly and slowing down. Then, you will wind up being exposed to attack for a longer period of time.

Until the past two months, a plan was in place to leave out AI-controlled teammates – however, the decision was made to allow people to play with AI allies instead of just relying on online allies. The core game still gives you third-person combat, but you have to be more careful in the world and try to focus on hiding behind things like large barrels and rely less on smaller objects like boxes. Using flowers and tall grass as cover can work – but only in the short-term. Trying to use it as longer-term cover will result in you being wide open in due time. One goal the dev team had was to leave more up to the players than prior entries. You can still get a guided path through an area, but you can also choose to just do what you want in the world. The island is huge and you can take out rivals wherever you find them. There is a level-based structure to character skills – so gear and characters can have their stats increased over time. 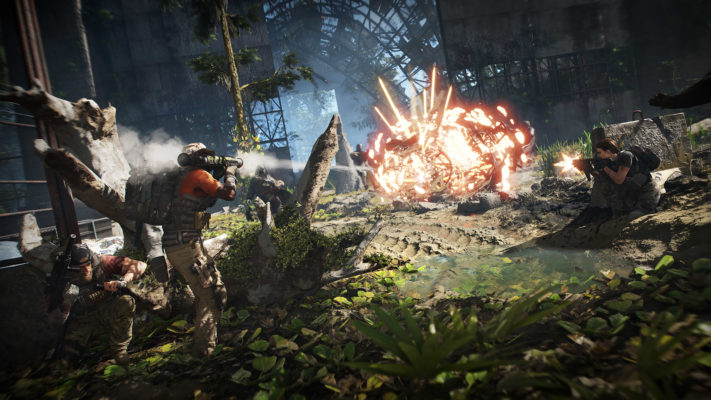 Going against a group of humans as one group is a different kind of challenge than facing something like a giant tank. With the former, you want to take rivals out bit by bit, while when fighting a singular large enemy, your strategy has to change. You can’t be as offensive-minded and need to lean on defenses and only be offense-based when you have a safe opening to do so. The team consulted with real soldiers to ensure that their portrayal of combat is respectful to their sacrifices while also making sure that the game is a blast to play. The usage of breakpoint in the title refers to the breaking point soldiers can have for their fatigue – both mentally and physically.

Ghost Recon Breakpoint is due out for the Xbox One, PlayStation 4, and PC on October 4 and looks like a promising follow-up to the stellar Wildlands.