EVE Online primarily exists as the long-running MMO, but the franchise has taken on a few different forms, such as VR fighter EVE Valkyrie. There were many new announcements for EVE Online for the upcoming year at EVE Vegas and one that stood out was their new first-person shooter Project Nova (working title, final name subject to change). While the build we had access to is a work in progress and still in the pre-alpha stage, it was enough to get a general idea of what can be expected with this. Newer players of EVE Online might be surprised to see EVE release a first-person shooter, but this is not the first time EVE ventured into this territory as a few years ago they released the PlayStation 3 exclusive Dust 514

Project Nova is not a direct sequel to Dust 514, but a spiritual successor with thematic elements linking the two titles along with the larger world of EVE Online. Players will assume the role of a Warclone and take on the totalitarian rogue state of Sansha’s Nation. Project Nova will take place in dystopian New Eden, allowing players to see to see the famed EVE spaceships flying, solar systems and space battles in the background as they engage in the gun battles on foot. Project Nova will develop after its release based in part from player feedback, as is general procedure with CCP Games. 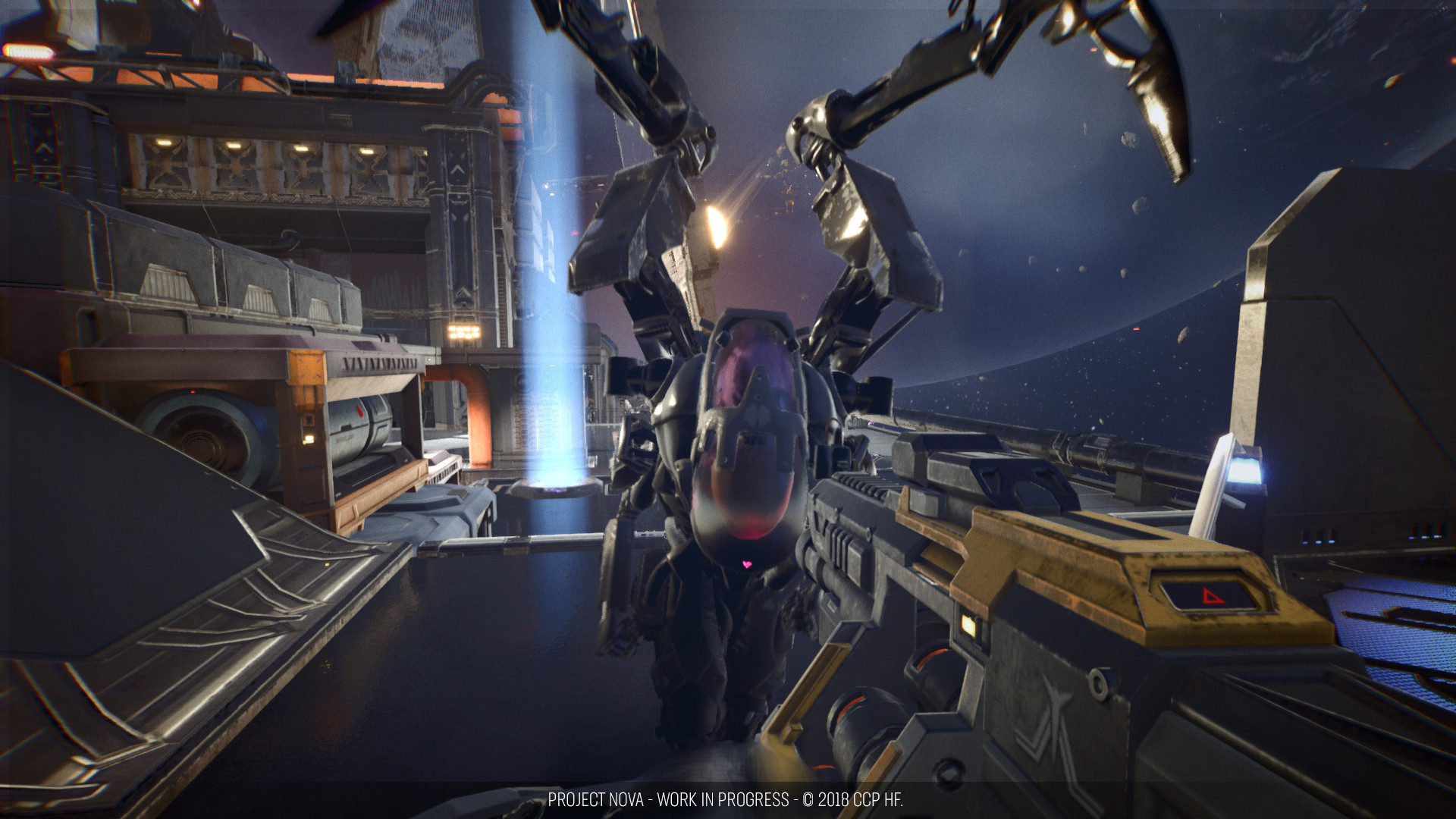 There are three playable class types in Project Nova and each class will be able to have any weapon loadout the player desires. The option to play with this at the build that was present at EVE Vegas was not available but the developers informed us that any bizarre combination of weapons we want to put together can be used in the final release, such as a tank character with a rocket launcher, grenades and sniper rifle. The three classes as Sharpshooter, Assault and Sentinel. The Sharpshooter is the sniper class, who can hover in the battlefield and pull off sniper shots while floating from a more desirable vantage point. The Sentinel is a tank character, designed to be slow moving but carries the heavy artillery. The Assault is a basic well-rounded infantry unit and the assault rifle makes it the most accessible class for people not good at first-person shooters.

Project Nova is a tactical shooter where team work and communication can greatly influence the course of battle. At EVE Vegas the build only had a PvE mode where a team of four players tries to capture three stations on a map. Whichever team controls the majority of these points will accumulate points for their team, and if they can accumulate 1000 points before the enemies, the base is successfully defended. A team needs to have at least one station under their control in order for automatic respawns to occur. It took my friends and I about three games to get this figured out but once we did we had no problems, but to be fair only the easy difficulty was available. The first game we all did our own thing, which resulted in us killing a lot of enemies but ultimately we lost since we were all dead and had no bases under our control. The second game we worked as a unit, took over two bases and occasionally tried to control the third. After we won we failed to make it to the exfiltration point, so even though we won, we couldn’t evacuate to safety and thus got no bonuses. Now that we knew how this worked in game number three we knew to work as a team and assist each other at the exfiltration point as the clock ran down. 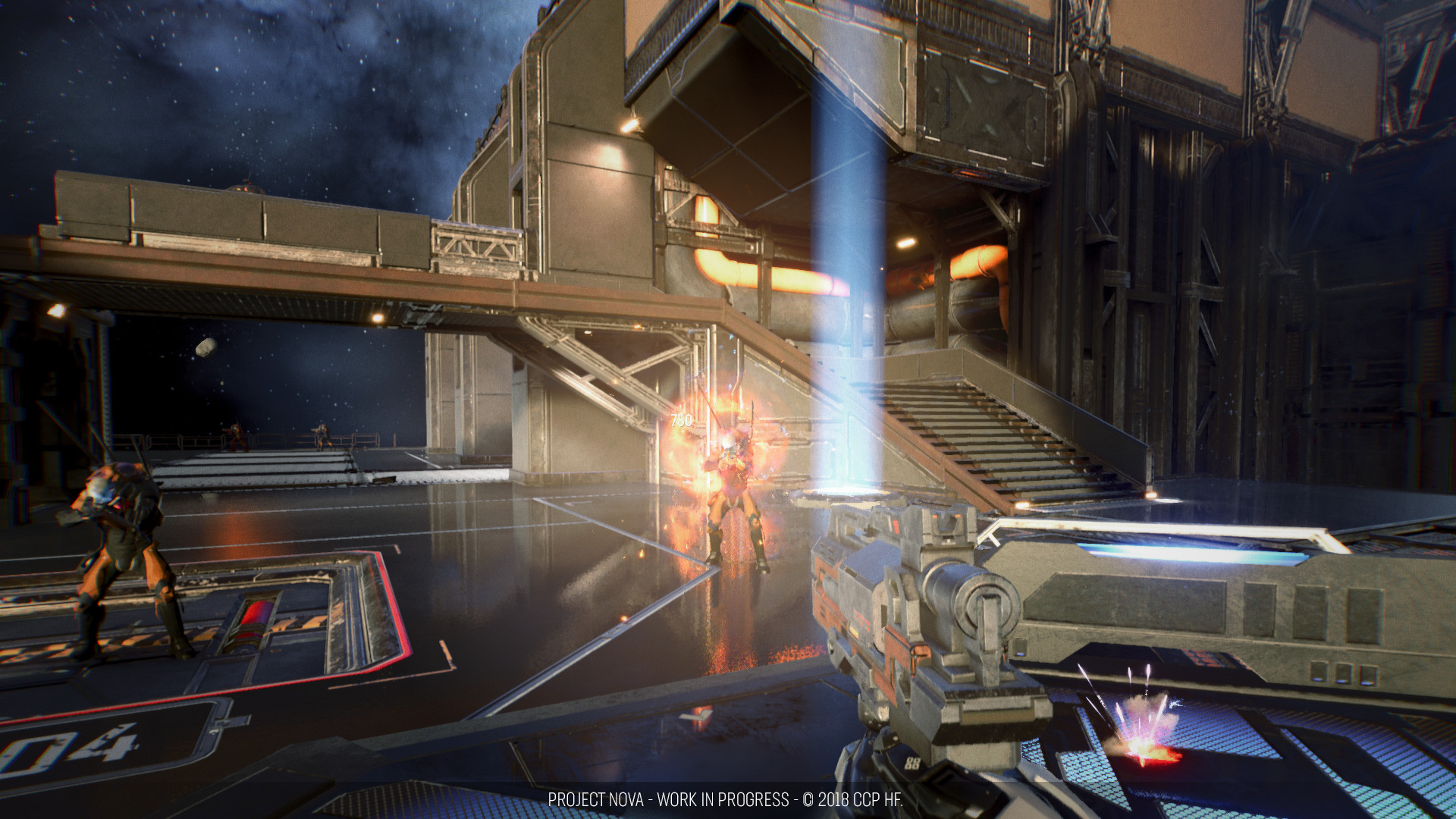 Project Nova will be PC exclusive. In addition to the PvE mode there will also be a PvP mode that supports up to 16v16 matches where each team can be broken down into four squads of four with each team having a payload to deliver, forcing players to use strategy and teamwork beyond what will be a simple death match. The pre-alpha gameplay was a lot of fun despite being a work in progress with a lot of limitations in place, so it’ll be interesting to watch how Project Nova develops and what name it will eventually go by.