Like clockwork, the Call of Duty franchise arrives on schedule every holiday season. Developer Sledgehammer Games was added to the fold alongside Infinity Ward and Treyarch at the start of the last-generation, giving each developer a three-year development cycle. Unfortunately, that cycle hit a rough patch last year with Treyarch moving into the lead development slot last year, only two years after their previous release, Call of Duty: Black Ops 4. While Call of Duty: Black Ops Cold War was a solid entry in the franchise, the rushed nature of its development meant many of the technical achievements of Call of Duty: Modern Warfare (2019) could not be implemented. Now, in 2021, Sledgehammer Games is in the driver’s seat, taking players back to World War II with Call of Duty: Vanguard.

Despite releasing two titles, Sledgehammer remains the relative newcomer in the Call of Duty universe. While Infinity Ward and Treyarch have built hugely successful sub-brands within the primary IP, Sledgehammer has yet to find its footing. However, first with Call of Duty: WWII and now with Call of Duty: Vanguard, the studio appears to be planting its flag down within the World War II era. We got a chance to check out the single player campaign to see what Sledgehammer Games has up its sleeve. 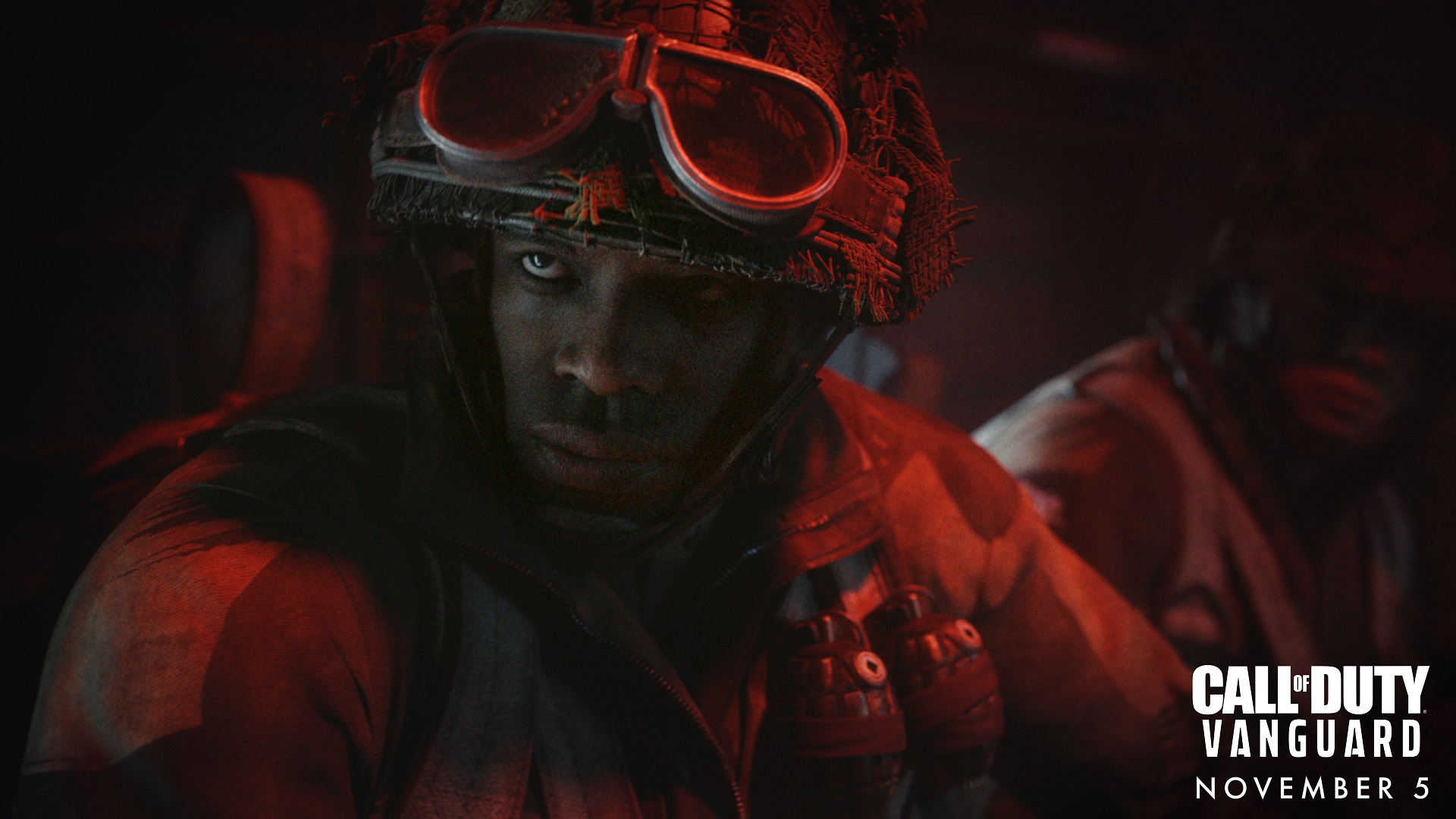 Call of Duty: Vanguard takes players back to World War II. Unlike Call of Duty: WWII, however, Vanguard is far more expansive, taking players across the Western, Eastern, Pacific and North African fronts of the war. Sledgehammer states that the goal was to showcase a world at war, hence the focus on so many fronts. While the game is historically inspired, the studio is taking liberties with storytelling. Specifically, Call of Duty: Vanguard’s campaign lays the groundwork for the birth of the Special Forces near the end of the war. Meanwhile, the story continues in multiplayer where you become the Special Forces.

The single player campaign takes place towards the end of the war. Allied forces have discovered a secret Nazi plan titled Project Phoenix, which they believe is a plot to install a successor to Hitler. At the core of the story is Heinrich Freisinger, the Director of the Gestapo, who serves as the main antagonist. The Allies band together to create a special forces team filled with soldiers who accomplished extraordinary feats during the war to counter this threat. These are Arthur Kingsley of the British 9th Parachute Battalion, Polina Petrova of the Russian 138th Rifle Division, Wade Jackson of the American Scouting Squadron Six, and Lucas Riggs of the Australian 20th Battalion. 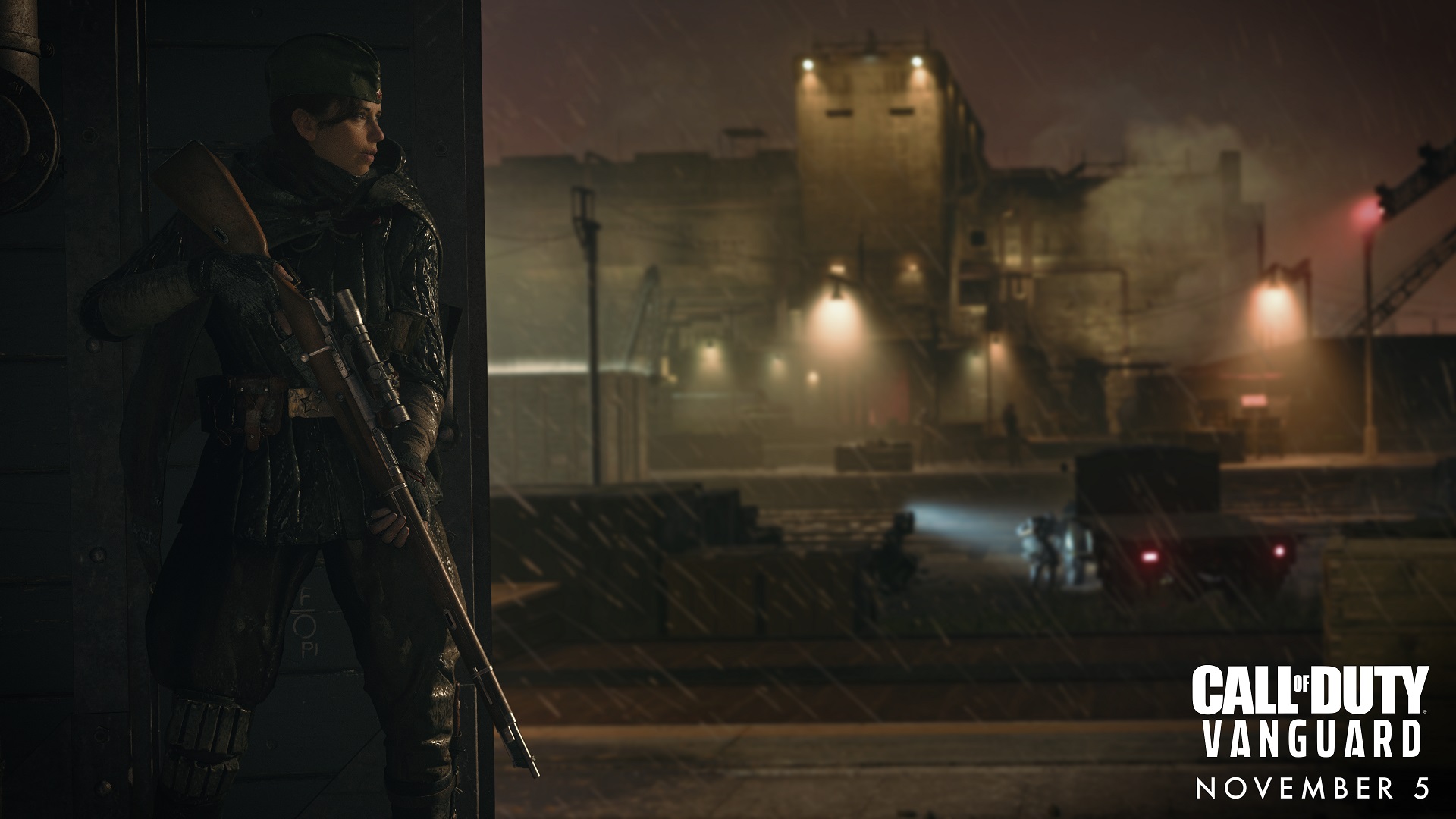 At the start of the campaign, the four are tasked with infiltrating Berlin and putting an end to Project Phoenix. Having no experience working as a cohesive unit, however, they fail and are captured by the enemy for interrogation. Though Sledgehammer didn’t confirm it, it’s likely the interrogations will lead into each character’s missions. Kingsley’s missions focus on the Western Front, Petrova’s on the Eastern, Jackson’s on the Pacific, and Riggs on North Africa.

To provide a taste of what to expect from the campaign, we got to see an early level from Kingsley’s perspective. Taking place during Operation Tonga on the night before D-Day, the mission opens with Kingsley parachuting behind enemy lines and hiding from enemy soldiers. The mission quickly highlights the technical prowess of the new Call of Duty engine. Unlike Black Ops Cold War, Call of Duty: Vanguard uses the new Call of Duty Engine pioneered in Call of Duty: Modern Warfare (2019) and it shows almost immediately. Kingsley is left to hide in the woods upon landing, dodging the bright light from enemy flashlights as they survey the scene. Meanwhile, in the distance, the light from anti-air cannons floods into the forest with only the trees providing shadows. It’s an impressive opening and a welcome return of the new Call of Duty engine. 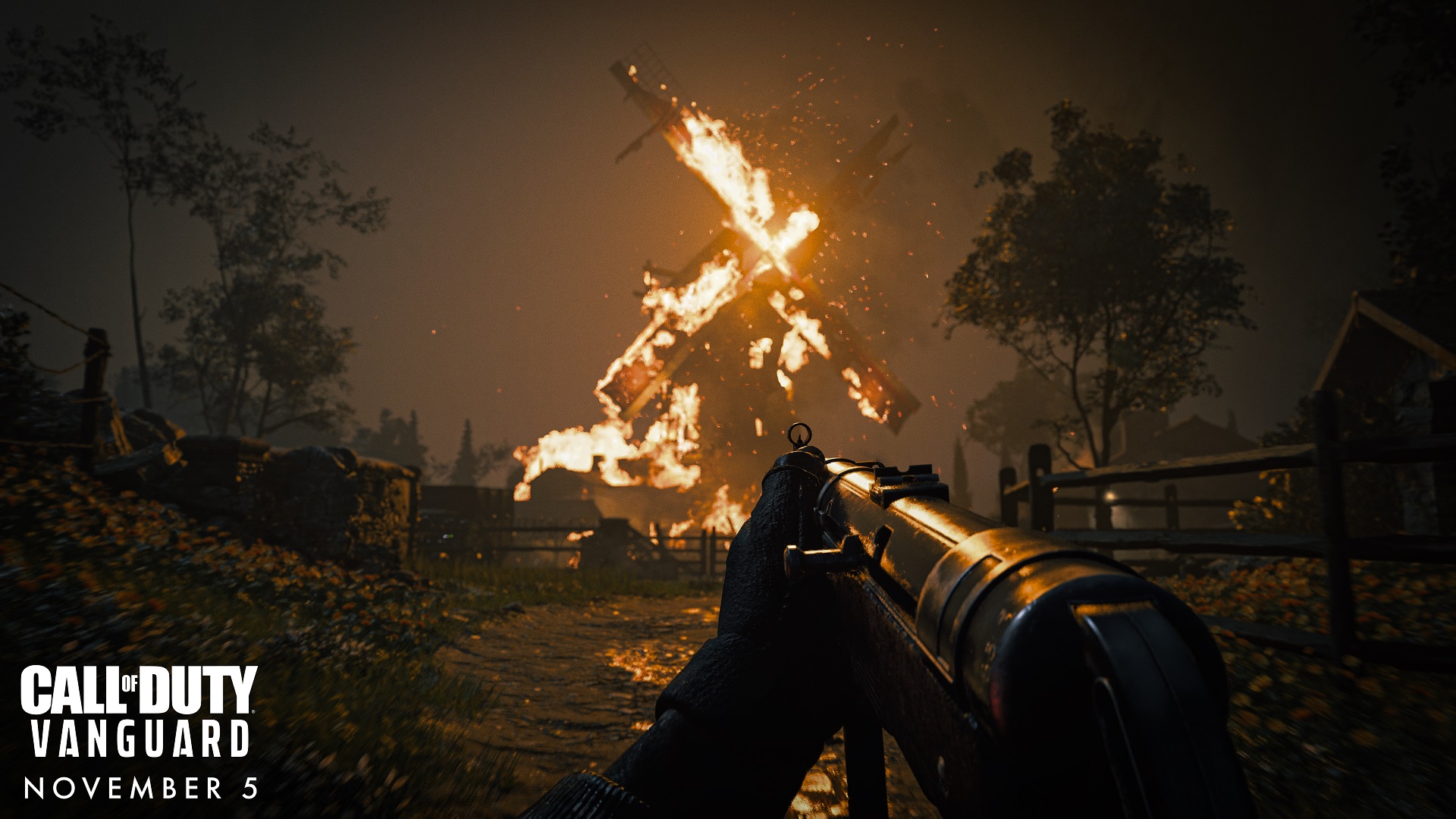 The level took Kingsley to a cottage that enemies were searching. The entire sequence felt like a cat and mouse chase with Kingsley using environmental clues to take out enemies and survive. One enemy walked behind a piece of linen and projected a shadow, another’s footsteps could be heard a floor above, and finally, an enemy reloading queued Kingsley into when it was safe to rush in for the kill. Guns in Call of Duty: Vanguard are powerful and visceral, causing environmental damage as bullets pierce materials in the hunt for their target. The level of destruction never reaches the same caliber as the Battlefield franchise, but what’s here works well in showcasing the ferocity that was World War II.

The level ended with a spectacle, a ballet of particle effects, as Kingsley reached his objective. The windmill that was meant to be a rendezvous point and safe haven is lit in flames with a lone figure encased in shadow. Not knowing if the figure is a friend or foe, Kingsley raised his weapon, all while pleading for a friendly signal. The mission was an excellent showcase for the engine, showing off its graphical capabilities and Sledgehammer’s commitment to the time period. Hopefully that same attention to detail permeates throughout the rest of the campaign.

Of course, the single player campaign is just a fraction of the Call of Duty: Vanguard experience. Much like Modern Warfare (2019) and Black Ops Cold War before it, Vanguard has been built around a unified experience. Progression carries over across all game modes and Warzone, so it’s fitting that we got additional details regarding Vanguard’s other modes and Warzone, though we sadly didn’t get to see much of them. 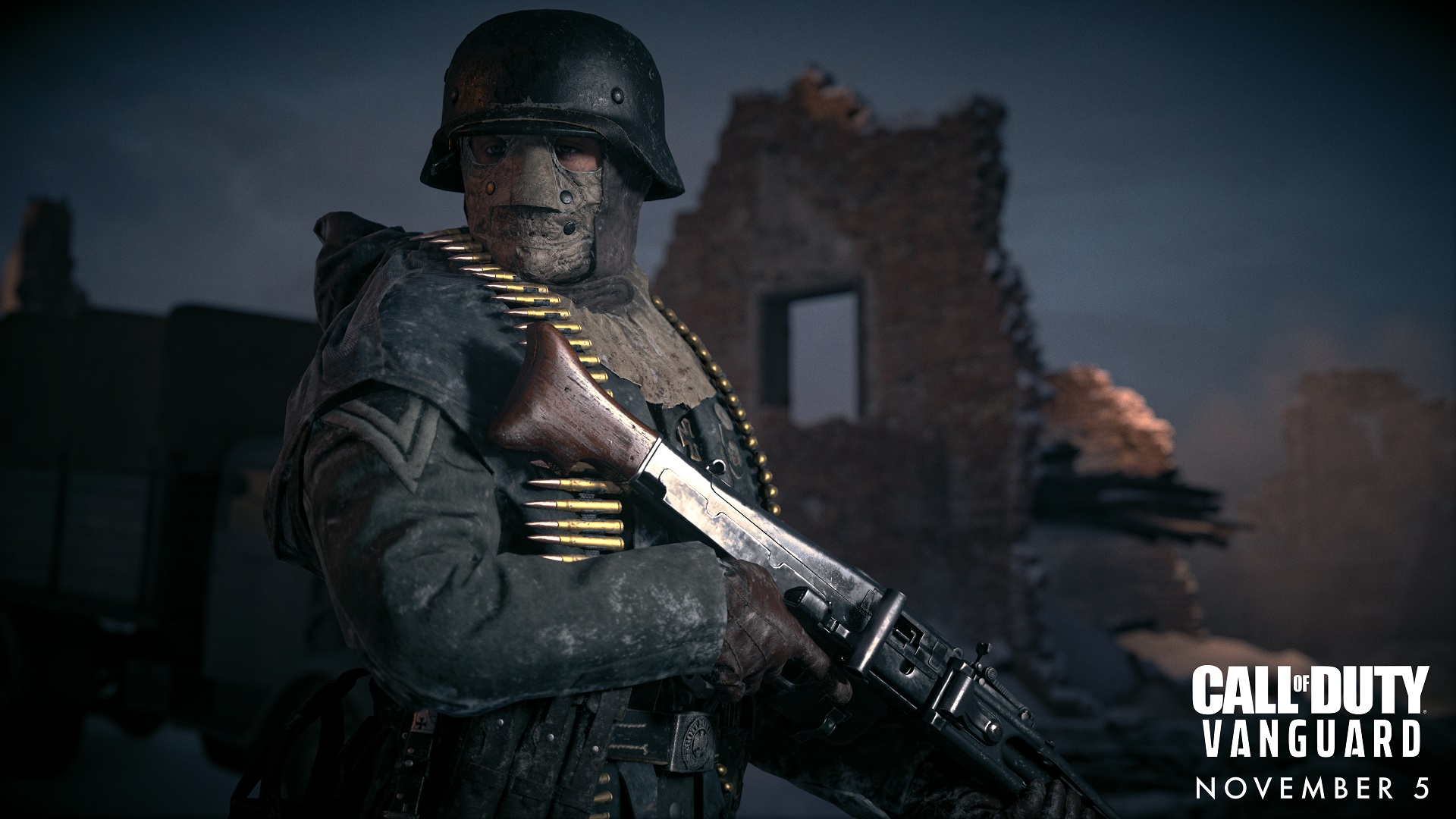 In terms of multiplayer, Sledgehammer Games is giving us lots of variety upfront. After Modern Warfare (2019) and Black Ops Cold War’s paltry selection of launch maps, Vanguard will offer players twenty maps right out of the gate. Sixteen of those will be for 6v6 modes and four for Gunfight. Sledgehammer also confirmed that Gunsmith is returning and that players can outfit their guns with custom ballistics and different ammo types. Modern Warfare (2019)’s mounting mechanic also returns with a new twist. Players can now slide their mounted weapons across surfaces, allowing them to reposition their guns without re-mounting.

The campaign’s destruction mechanics will appear in multiplayer as reactive gameplay environments. While players can’t completely level walls or destroy structures, key objects and structures can be destroyed to create power positions and new avenues for engagement. According to Sledgehammer, the goal is to have maps that evolve over the match. At the start, the map is pristine. By the end, it’s wrecked. 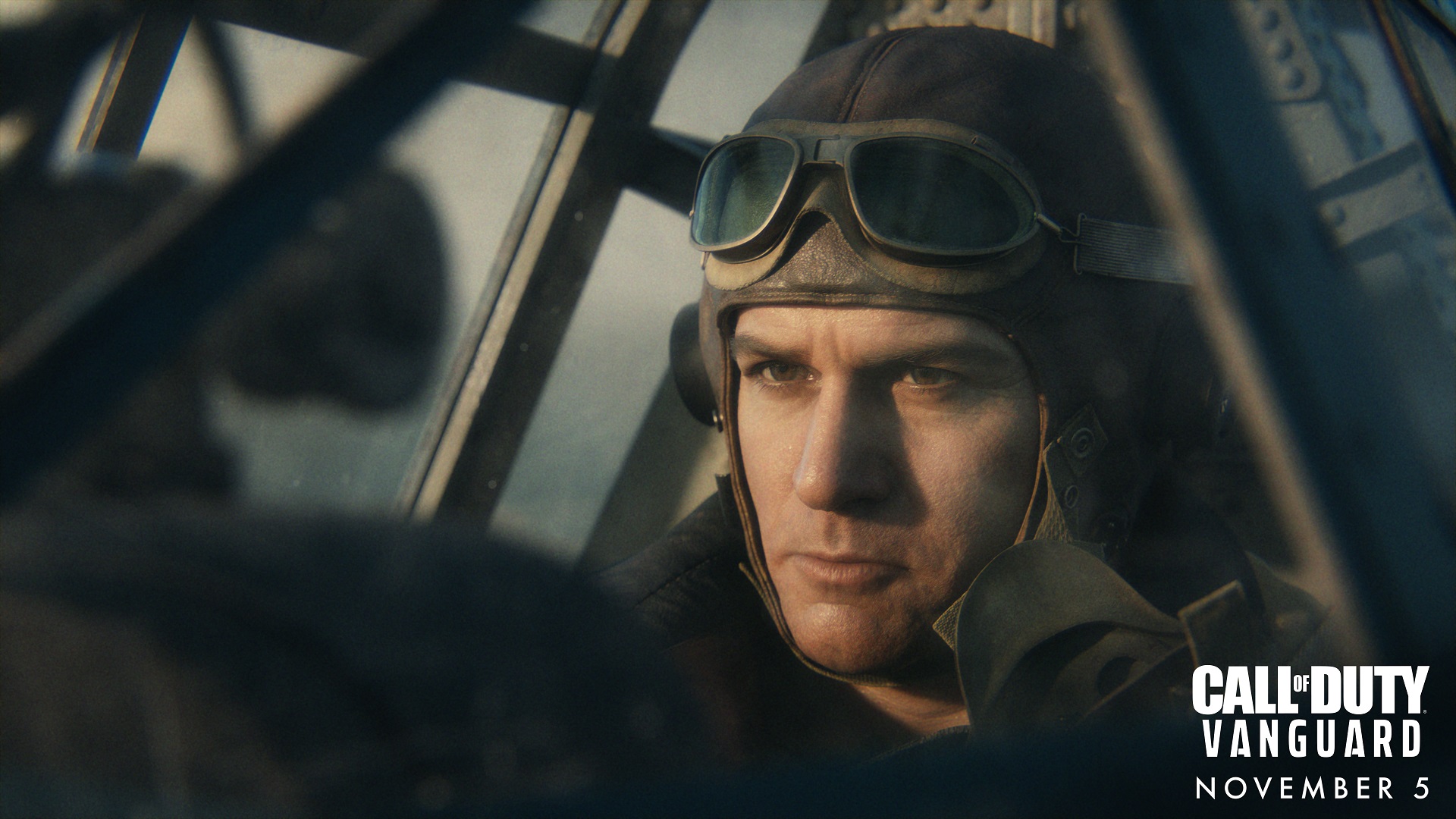 In terms of co-op, Sledgehammer Games is working with Treyarch on Zombies, marking the first crossover for the franchise. Vanguard’s Zombies will serve as a prequel to the Zombies story set up in Black Ops Cold War. Other than that, no additional details were provided regarding Zombies.

Raven Software will continue to lead the development of Warzone, and they’ve been working with all Call of Duty teams to expand and enhance the free-to-play mode. First off, the team is working on a brand new Warzone map that launches this year. Secondly, they’ve developed a new anti-cheat system to address the rampant cheating currently plaguing the game. That system launches alongside the new map. Thirdly, all Vanguard weaponry and Operator play balance will be seamlessly integrated into the experience. Finally, like previous years, Warzone and Vanguard will receive a calendar of free post-launch content, including new weapons and gadgets. It’s an exciting checklist of items players have been asking for, though we’re still waiting to hear if there’ll be proper PS5 and Xbox Series X|S versions of Warzone. 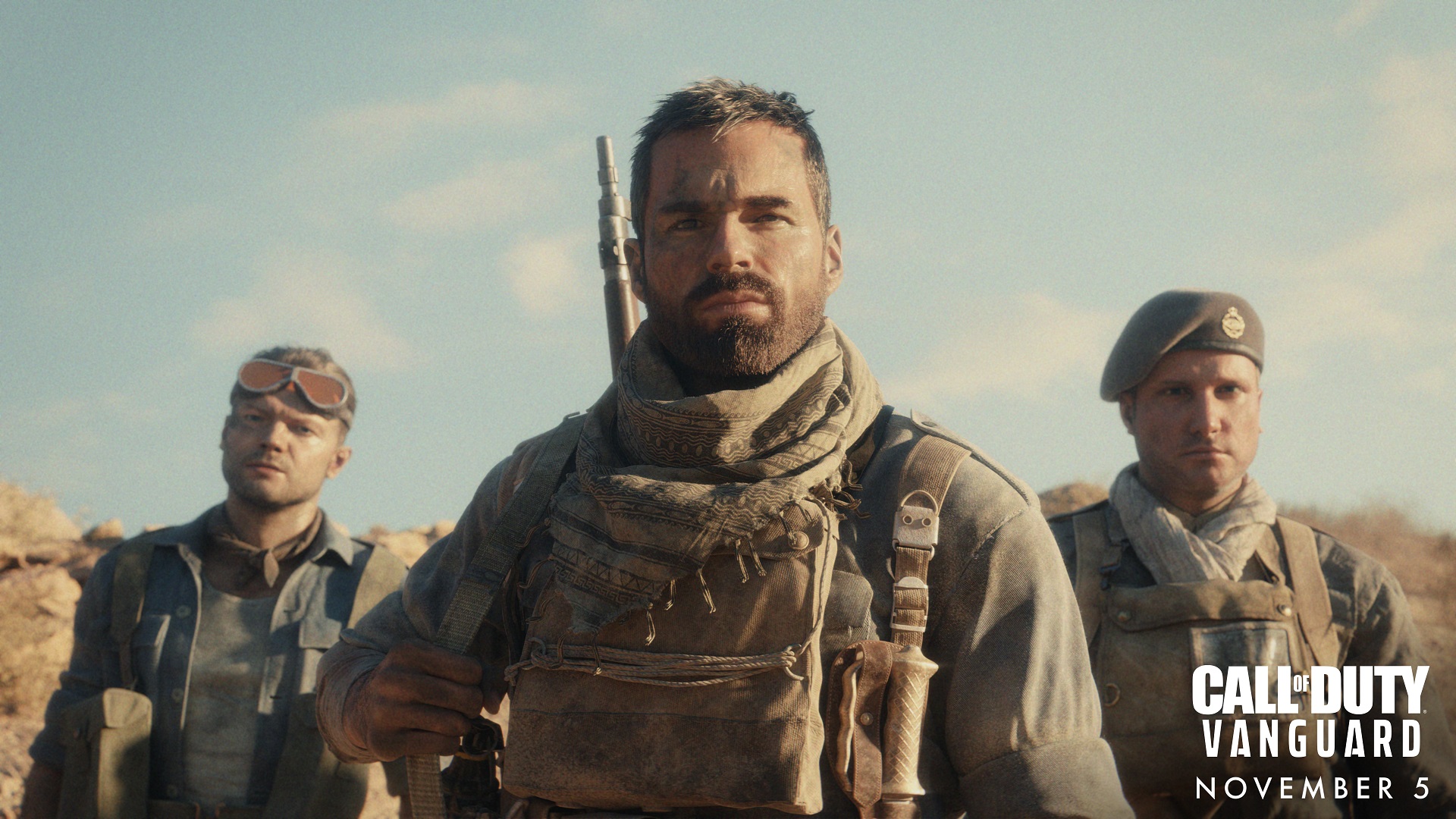