At the risk of having this spill over into an intentionally personal retrospect, I feel it’s important to get one’s own personal history out of the way when it comes to what one has made of FromSoftware’s — shall we say, more coveted — chronology of releases over the past decade. Plus it also aids, one hopes, in my decision to focus for this impressions piece more on the world and explorative aspects more so than the actual combat. Apologies if you were expecting a full-blown dissection of the meta of available weapons here, but this is not that kind of write-up. Anyhow: both Bloodborne and Sekiro were games I thoroughly enjoyed for more than their challenge and variance on character builds alike. Their art direction, aesthetic and use of color to further exemplify their intended tones. But most importantly of all: their level design. These were games whose world-building and From-like manner of storytelling (or direct lack thereof) were emboldened by the interweaving network of passages, buildings and short-cuts alike.

Then you have Demon’s Souls — the progenitor of this specific formula of action RPGs — which while enjoyable, garnered less investment in its mythos. So then what of the Dark Souls trilogy, the central pillar in all this? The one brand many point to as the cornerstone — the key to this long-lasting, though warranted, success? At the risk of repeating myself: it’s the name I have the least amount of attachment to. To the point that Dark Souls is one of those series of games that I respect at a distance and will acknowledge for all the many things it gets right and of the zeitgeist it seems to have sparked, arguably revived to some. But one that I just can not find much enjoyment in actually playing. Dark Souls 2, to this day, a game I am yet to actually finish not out of laziness but out of sheer boredom of what I’d fulfilled up to the point of dropping it and signing out completely. Why is this admittance of disinterest so important? Elden Ring from a glance looks (and feels) much more akin to the “Dark” identity than any of From’s other iterations of this much-beloved formula. Evident in as simple a glance at a mere still, but one that needs to be mentioned regardless. 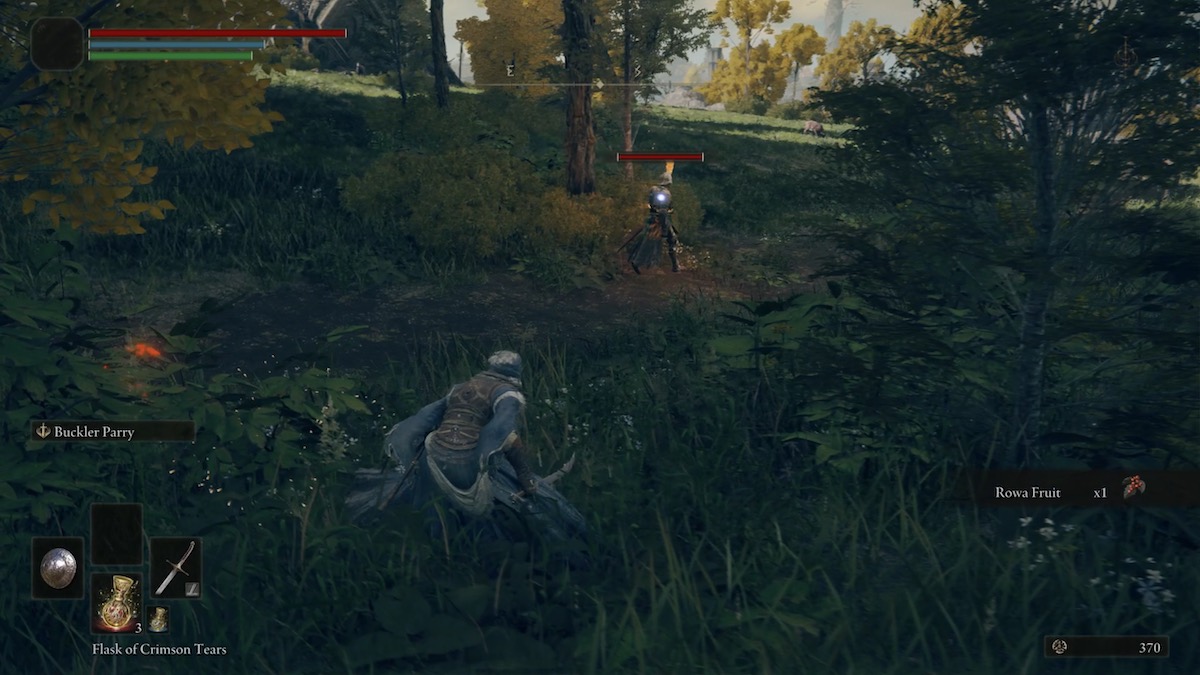 To the point that, unlike Bloodborne and Sekiro — each with their own distinctive setting and crucially of all, combat style and accompanying mechanics to master — the studio’s much-anticipated release feels like a fourth entrant to an already-existing brand. Dark Souls 4, I willingly mutter. Instinctively dismissive that may sound, you can’t help but take but a few seconds to study the UI layout. The three bars governing health/magic/stamina alike, not to mention that bottom-left bundling of icons. Left-hand equipment, right-hand equipment, equipped magic and bottom space most commonly housing your trustee Estus Flask. The dark fantasy setting, the dominant health-bar of bosses, the dodge-rolls and the salvation that Bonfires often garner. Or in Elden Ring‘s case, sites of “Lost Grace.” That’s not to say Elden Ring isn’t at least aiming to deviate from convention. A deviation that understandably wants to be regarded just as highly as the venture into an open-world formula this time round. An entrant too trying new ideas, but doesn’t want to scare its fanbase away too quickly.

Elden Ring‘s color palette is more vibrant in parts, but this is still balanced out by that signatory desolation and slightly washed-out denoting of some cataclysmic, if not apocalyptic, past event you’re ever-so-slowly picking apart and deducing the meaning of. But it’s this balance that strikes at the heart of what Elden Ring is in all likelihood going for. Not just in the artistic sense, but in one of legacy too. Of appeasing those who fell in love with the Dark Souls template — those who may still regard them as highly as they always have — yet still wanting to push for new ground if not in the genre as a whole, than at least with what From themselves are used to, are comfortable with. So when the conversation is more to do with the geographical structure, it’s easy to come away from the recent network test intrigued by what remains untouched and unexplored. Even if the restricting of one’s play-time to the early periods don’t provide much by way of a clinical answer on how well justified going open-world actually is here. But I’d be lying if I said I haven’t enjoyed what I’ve discovered and what I’ve triumphed over thus far, trudging The Lands Between. 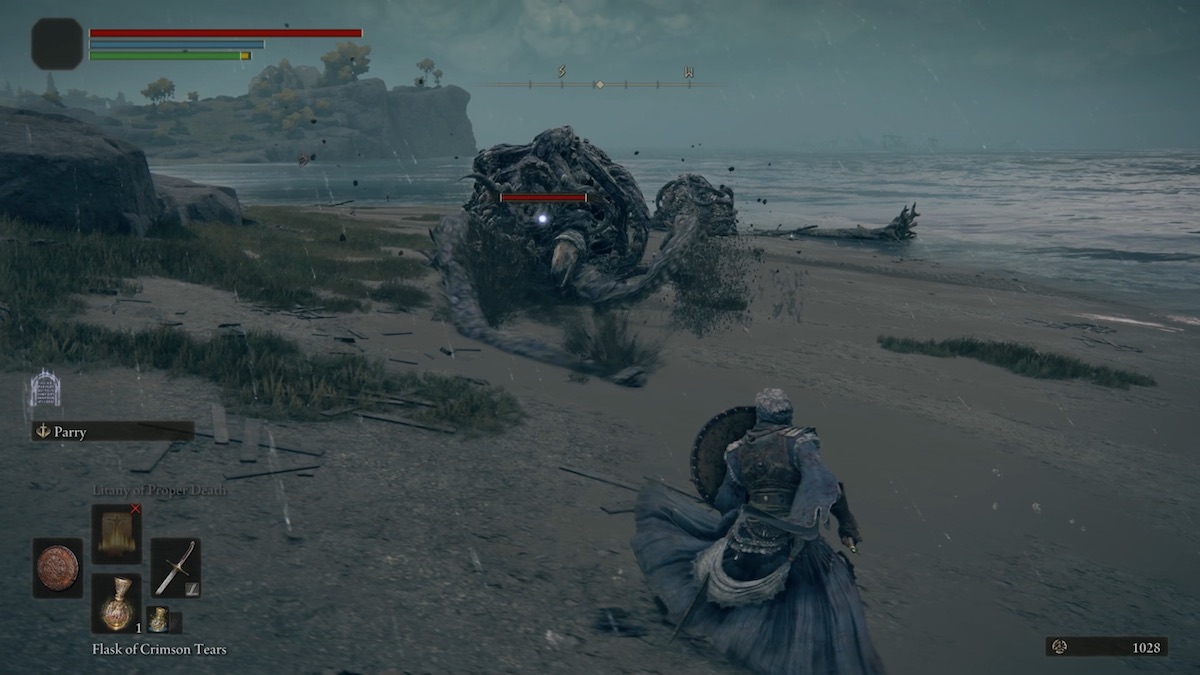 A conclusion made more vital given so much of these impressions are shackled down by the acknowledgement that this is indeed the start of the game, or at least is implied to be. Open fields that aren’t exactly a roaring showcase of how perilous and high-stakes  scenarios previous trailers have more than alluded to will get. But Elden Ring does at least offer promise that From have crucially adapted the Souls formula to that of more spacious reaches. The most successful and continually-engaging example being that of the very notion of discovery in of itself. Where other open-world titles would be more suggestive in the presence of landmarks or [not so] hidden areas to wade through, Elden Ring feels more subtle in keeping its secrets to itself. Best of all: just like those same dungeons and perilous segments of prior titles, players hoping to best any Souls game not only have to work to find these secrets, but must above all else begin with the concession that one’s method of tackling said reaches can at any point go so horribly wrong.

Whether that’s tackling one of the handful of catacombs and falling prey to those usual enemy-laden traps or curiously meandering into a sunken valley — to then be ambushed not just by an invading NPC, but by skeletal foes shortly afterwards. The frustration is never too far away (as it so often is) and the lessons to be learned right on frustration’s heels. And that pain and irritation of death once again plays a key part in the enjoyment. An enjoyment that thanks to Elden Ring‘s more open design is one players are themselves are voluntarily engaging with. The game this time round, encouraging you to think more methodically and carefully about how to get through a given camp or litter of foes in one case — an idea that so obviously has been taken from Sekiro but whose canvas is now much broader in scope. Briefly disheartening it may be to find some instances aren’t as free or as sandbox as they may initially imply, to get through a segment doing nothing but manically dodge-rolling to safety. Maybe not the smartest or low-risk affair of them all, but one I was more than happy to tackle. 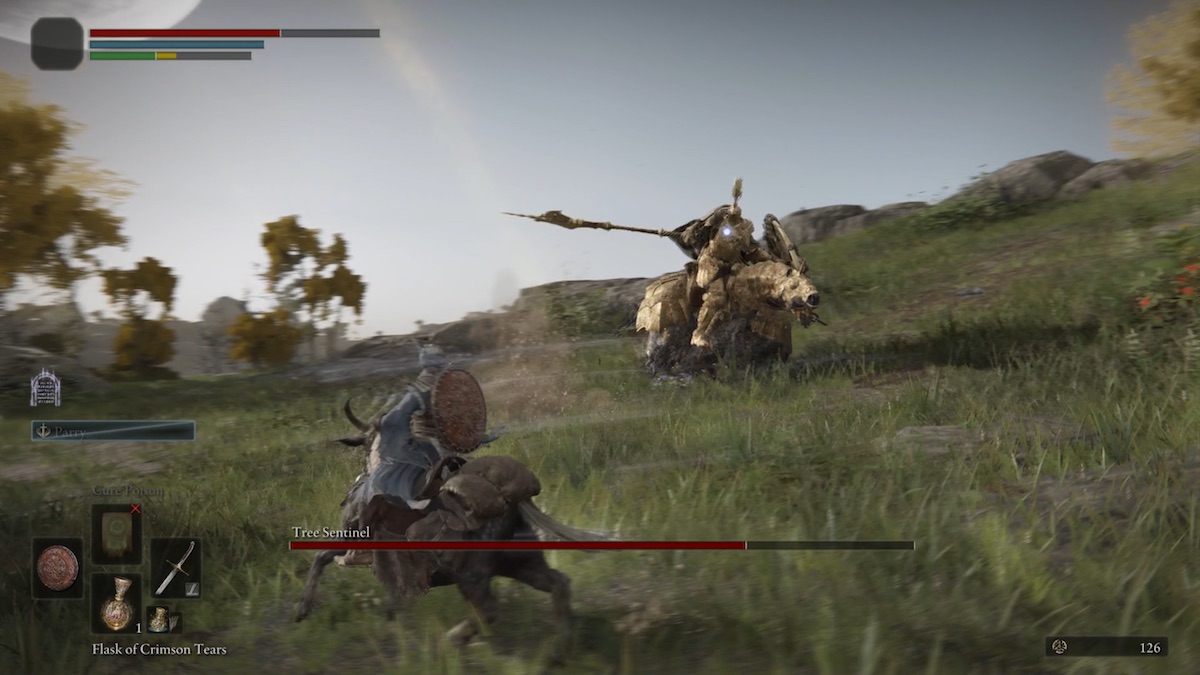 Thus the curiosity of this world, in so far as its design and arrangement, is heightened more so. And that’s without even going into the layout of dungeons themselves. To think Stormveil Castle is but one of Elden Ring‘s early offerings and yet is so quintessentially From-like in its sinister seduction of what may be around that corner. A corner that could very well kill you if you’re not thinking one step ahead at all time. Only to then have the rug pulled from underneath you — Elden Ring has been three steps ahead of you this whole time. But to not get ahead of ourselves, to go back to the more spacious parts of Elden Ring, here is where your player-character’s trustee, phantasmic-like steed Torrent comes into play. Horseback traversing of the world now very much a key part of the Souls formula. Albeit one that admittedly isn’t wholesale in its convincing us its place is resolutely implemented. Promising a spectacle it might be to have boss fights play out on horse-back, knowing you can make infinity-symbol trajectory in chipping away at an enemy’s health, does take away from the challenge.

At the very least, it’s a welcome tool to flee a scenario that can so quickly stack against you if your heart is not in it, just be sure to keep one eye on Torrent’s own health when an enemy attack comes swiping at you. Have Torrent’s health reach zero and you’re without that trustee steed for a brief time. But the inclusion of a mount to use for exploration in no way cancels out the necessity for exploration on foot. Key crafting resources — and too the necessity to engage with particular foes in order to acquire said resources — means that Elden Ring‘s expanded tool-set, while useful, is merely secondary to what is still a game all about overcoming challenge and learning through countless failed attempts. A philosophy that once more emerges to reveal its frustratingly-delightful form via its main boss encounters. 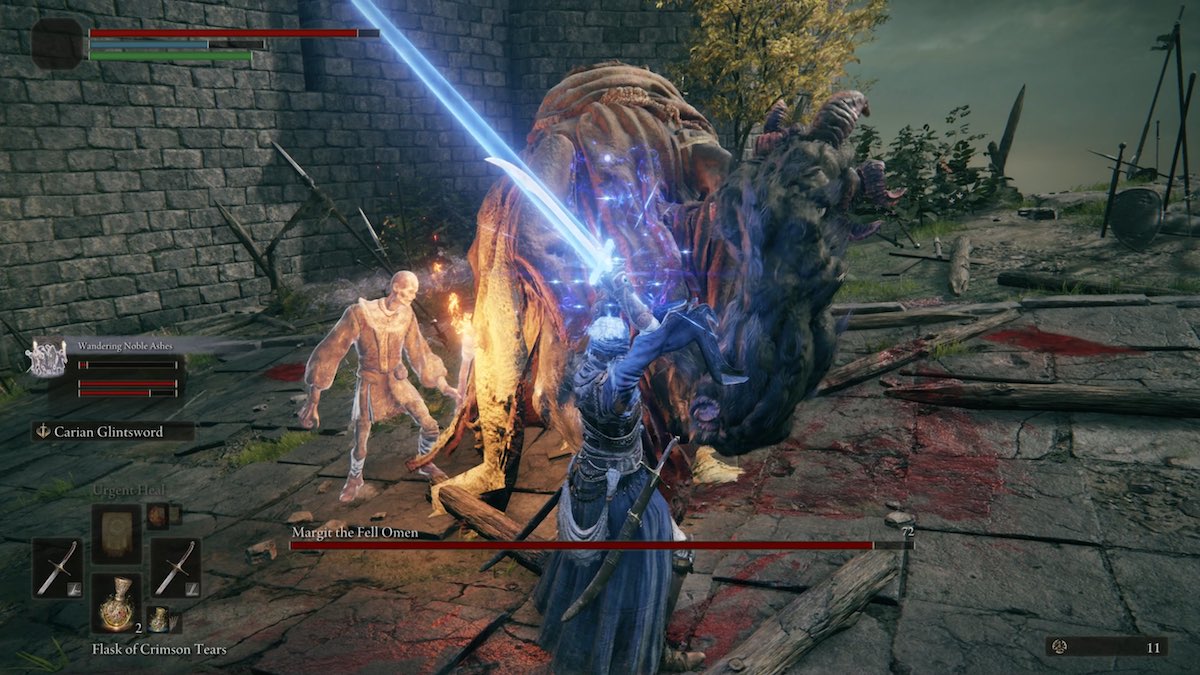 To repeat a previous remark: to think this is one of the game’s “early” set-pieces both fascinates and worries me on what From have in store later down the line. And even if those deaths continue to rack up, it’s welcome to see that gradual adapting to the situation materialize before you. To get the boss’ health down to three-quarters, then half, then trigger its “second phase” of attacks. Then a quarter left, then a slither and finally, at long last, it’s dead. To then trudge up onto the next challenge and find a sub-boss of sorts is giving you more trouble than the boss that took you at least a dozen tries to get right. It’s all so typically Souls-like as you once more find yourself going through the motions all over again, but not for a second — even in those early parts where you have no ides what’s going to happen — does it feel all that disheartening. Even for someone like myself who often prefers the mechanics of Bloodborne or Sekiro over the main Souls titles, Elden Ring continues to keep players on their toes. Or in the game’s case: keep players dodge-rolling in so desperate a circumstance.

But how much of this appreciation and these same lines of positivity can be applied to any one of From’s past works. Evidently the presence of challenge, of fights built on both spectacle as much mechanical complexity, are pretty much a given. In that respect, there isn’t much in Elden Ring that is wholly new or worthy of spotlighting other than a comical “yep, it’s a From game.” Hence why the open world approach — its desire to stretch the Souls template to that of an actual land to discover — is so important and crucial to the argument on whether or not FromSoftware’s direction is warrant of praise. Not least for a game that tonally and aesthetically feels very much like it’s appeasing Dark Souls fans more so than general From fans. Even so, personal preferences aside — as early and brief a time this has been — Elden Ring‘s answers may not be entirely definitive, but they are at least exemplifying what it is about Souls games, from a level design standpoint, that has made them so poignant and fascinating all these years later. Spectacle, challenge and the ample deaths sure to fill one’s eventual playthrough are a given. But it’s that aspect of Elden Ring that here is showing immense promise. A deliberately-shrouded but suggestive approach to open world design that is both subtle yet persuasive all the same. An ideal that speaks volumes to someone like myself who cares little for overpowered-magic builds and PvP indulgence — one I look forward to dissecting come February of next year.