The Far Cry franchise has built its reputation on a handful of key pillars. Each game is a first-person shooter set in a vast and explorable open-world, the villains often take center stage thanks to their charismatic personalities, and the plot twists reshape player’s thoughts about their allies and antagonists. The most recent entries, Far Cry 5 and New Dawn, strayed from that path, focusing more on an open-ended plot with little direction in 5 and incorporating more RPG mechanics into New Dawn. Far Cry 6 aims to bring the franchise back to the Far Cry 3 and 4 era, focusing more on the plot, the shooting and the main villain, but still including some RPG aspects. We had a chance to play five hours of Far Cry 6, giving us a chance to dive into the upcoming title. Can the game deliver the thrills and chills of older Far Cry games while incorporating modern-day Ubisoft mechanics or is the game already buckling under the pressure?

Far Cry 6 transports players to the tropical island of Yara to participate in a modern-day guerrilla revolution. The island is held by Anton Castillo, a dictator utilizing brutal conditions to produce the miracle drug Viviro, a cancer treatment made from biohacked tobacco leaves. Hoping to use the drug as a bargaining chip for international fame, Castillo forces his population to join the military or work at several camps across the country. You play as Dani Rojas, a male or female military dropout who merely wants to flee the island. After escaping and witnessing a life-changing event, however, Dani joins up with the local resistance group, Libertad, with the goal of uniting the victims of Anton to overthrow him and chart a new path for Yara.

Our time with Far Cry 6 was split across three-story beats. The first section was the escape from Esperanza. In this linear section, players selected to play as a male or female Dani and witness first-hand the brutality of Anton Castillo (portrayed by the excellent Giancarlo Esposito). It was here that the game made it clear it was walking back many of Far Cry 5’s controversial changes. For example, unlike Far Cry 5’s silent Deputy, Dani is a fully-voiced protagonist, giving them a more significant stake in the story.

Far Cry 6 truly begins on Santuario Island, a tutorial location to get players into the various systems and set up the narrative. It’s here you’ll meet key players like Clara Garcia, the leader of Libertad, and Juan, the spymaster and knower of all things guerrilla. Like other Far Cry games, your objective is to loosen the enemy’s grip in the country. In Santuario, that grip is a blockade keeping you and Libertad from the main islands. The island is also where you’re let loose to play around with the mechanics. Everything you’d expect from a Far Cry game is here. Gunplay is excellent with guns that feel powerful and are great to control. Stealth is adequate, with Dani able to mark enemies at a distance, hide in bushes and perform brutal takedowns. Vehicles are enjoyable to drive, though the handling can often feel floaty. 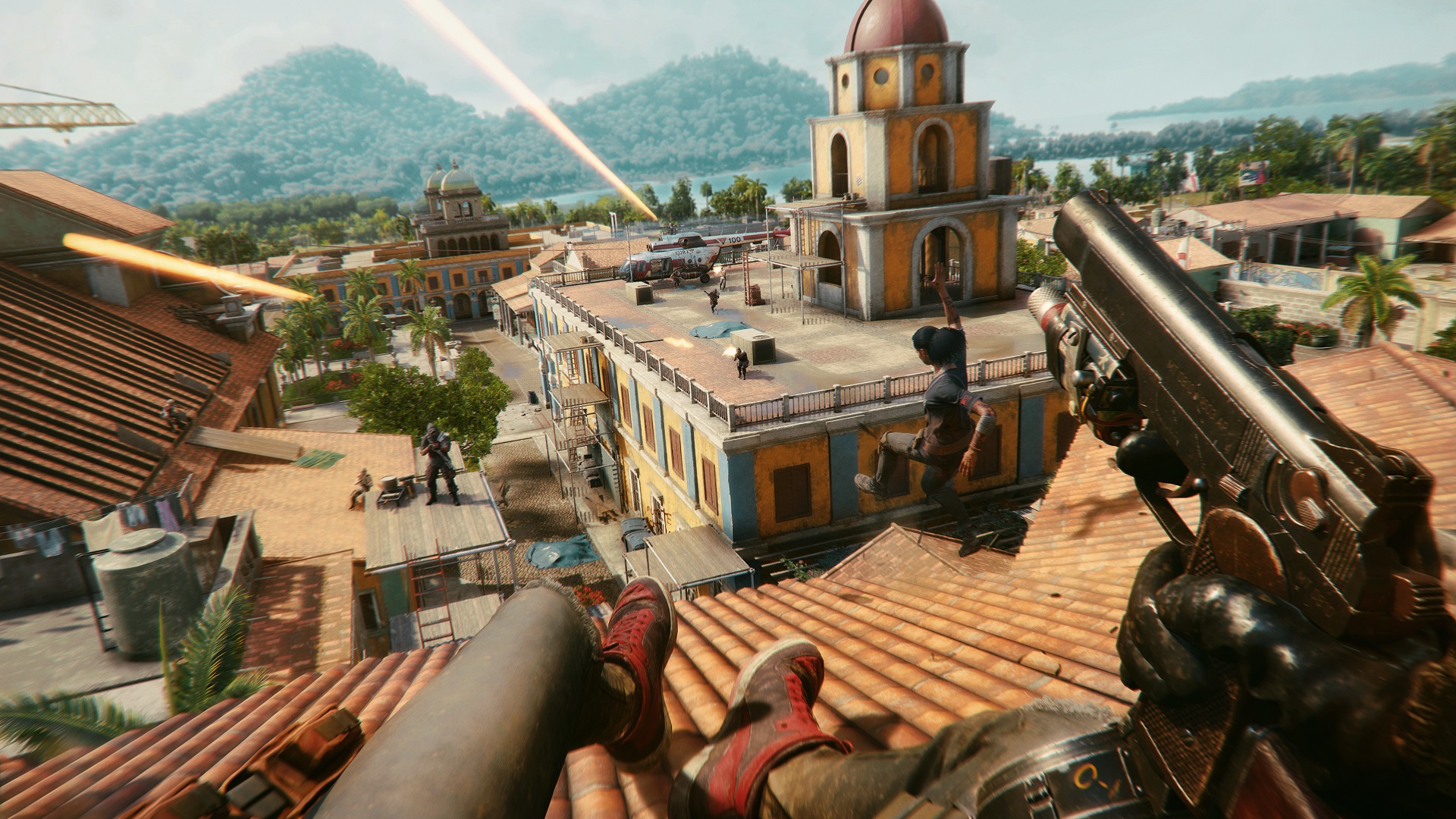 What sets Far Cry 6 apart from previous entries is its focus on turning players into a Resolver Guerrilla Fighter, which is built around your arsenal, gear and the Guerrilla Rank. Far Cry 6 allows players to carry around three primary weapons and a side weapon. These consist of various assault rifles, SMGs, LMGs, bows, and shotguns, among others. New to Far Cry is the Resolver weapons, which are made from scavenged parts. Some examples include a CD launcher and an electricity launcher perfect for taking out helicopters. In addition, littered across the island are workbenches where players can upgrade their weapons with different attachments and modifications.

While Far Cry 6 is primarily a shooter, Ubisoft is incorporating RPG mechanics into the game that tie into the ‘Resolver Guerrilla Fighter’ fantasy. So far, the RPG mechanics aren’t nearly as invasive as Far Cry 5 or New Dawn and not big enough to change the genre like what happened with Assassin’s Creed, but their presence is noticeable. For example, while all weapons are viable against any enemy, you can do more damage against certain enemies if your weapon has a certain mod equipped (i.e. the armor-piercing rounds mod inflicts bonus damage against heavily armored enemies).

RPG aspects carry over into the other two pillars of gameplay; gear and Guerrilla Rank. Like the past two Far Cry entries, players can equip their character with all kinds of shirts, shoes, pants, hats and gloves. Unlike those games, however, the gear in Far Cry 6 offers offensive or defensive capabilities. For example, a gas mask provided early in the game protects against poisonous fumes. From what we’ve played, none of the gear feels overpowered or controversial. 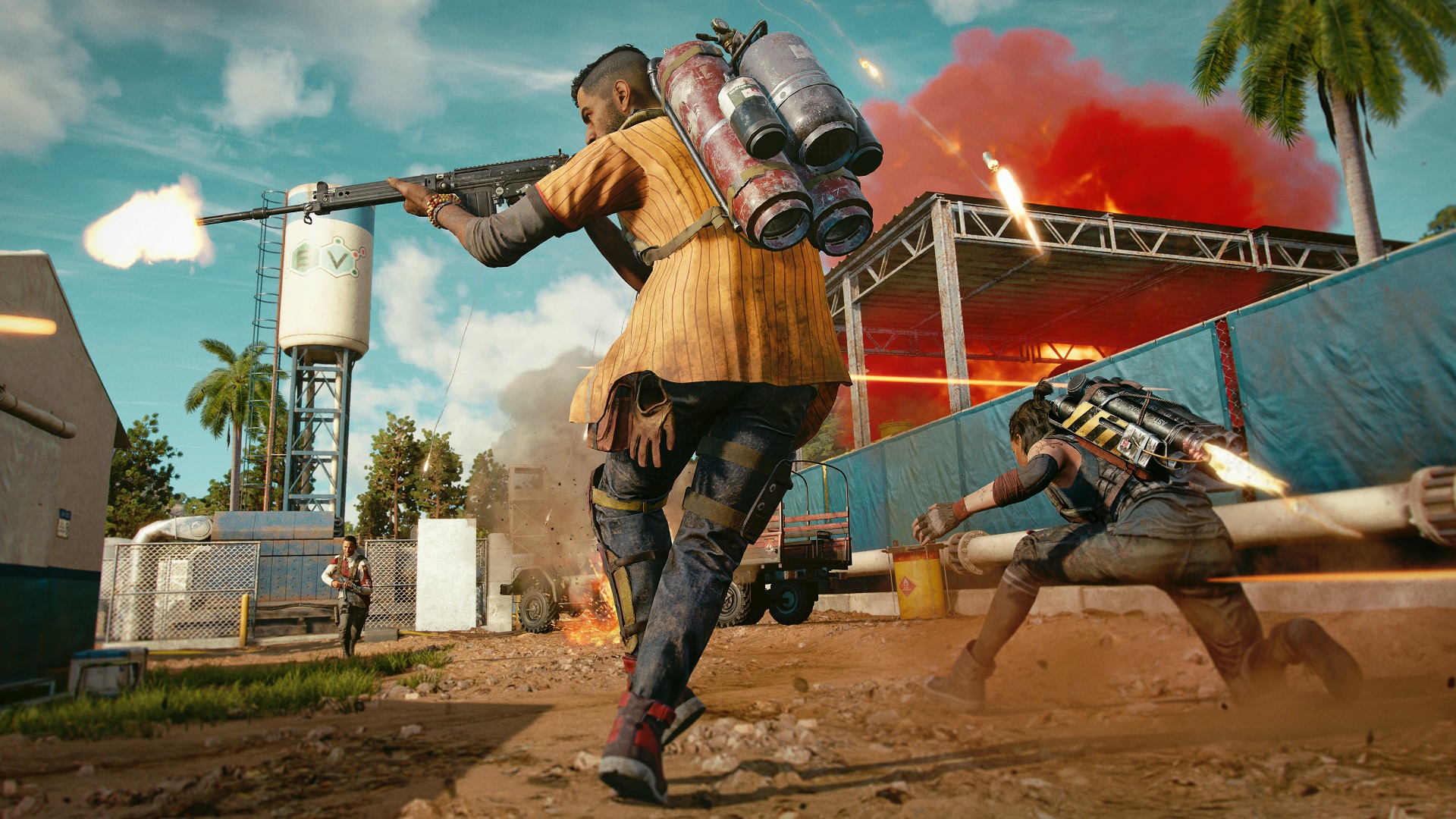 What players might find controversial is the Guerrilla Rank. As you complete missions, Dani’s Guerrilla Rank increases, which in turn grants them access to better weaponry and gear. That makes sense and feels realistic, but what doesn’t make sense is that parts of the island are level-gated, making enemies far more bullet-spongy and capable of shredding Dani quickly. It’s a significant change that feels at odds with the power fantasy Far Cry has always been. Early sections aren’t terrible, but that may change further in the game, potentially forcing players who want to play the campaign off the main path. Hopefully, it doesn’t come to that and those wishing to play the story can stick to it.

Santuario Island ends with the quiet or bombastic destruction of the blockade. From there, we traveled to El Este, one of the three main regions of Yara players will explore. Far more open than Santuario, El Este features dense jungles, coffee plantations and major towns like Concepcion. Once here, much more of the game opens up, allowing players to tackle side activities like capturing enemy outposts, completing Yaran stories and going on treasure hunts, among other things.

In another change from Far Cry 5, Far Cry 6’s story feels far more linear with strong momentum behind it. During our play session, there was no instance where we had to go out of our way to complete side activities to fill up a region bar to unlock story beats. El Este’s story sends Dani to recruit the Legends, a group of ex-guerrillas that fought in Yara’s last revolution and take refuge deep in the jungle. Dani also encounters La Moral, a group of young freedom fighters who idolize the Legends. It’s all one long, uninterrupted string of missions unless you want to tackle other activities. 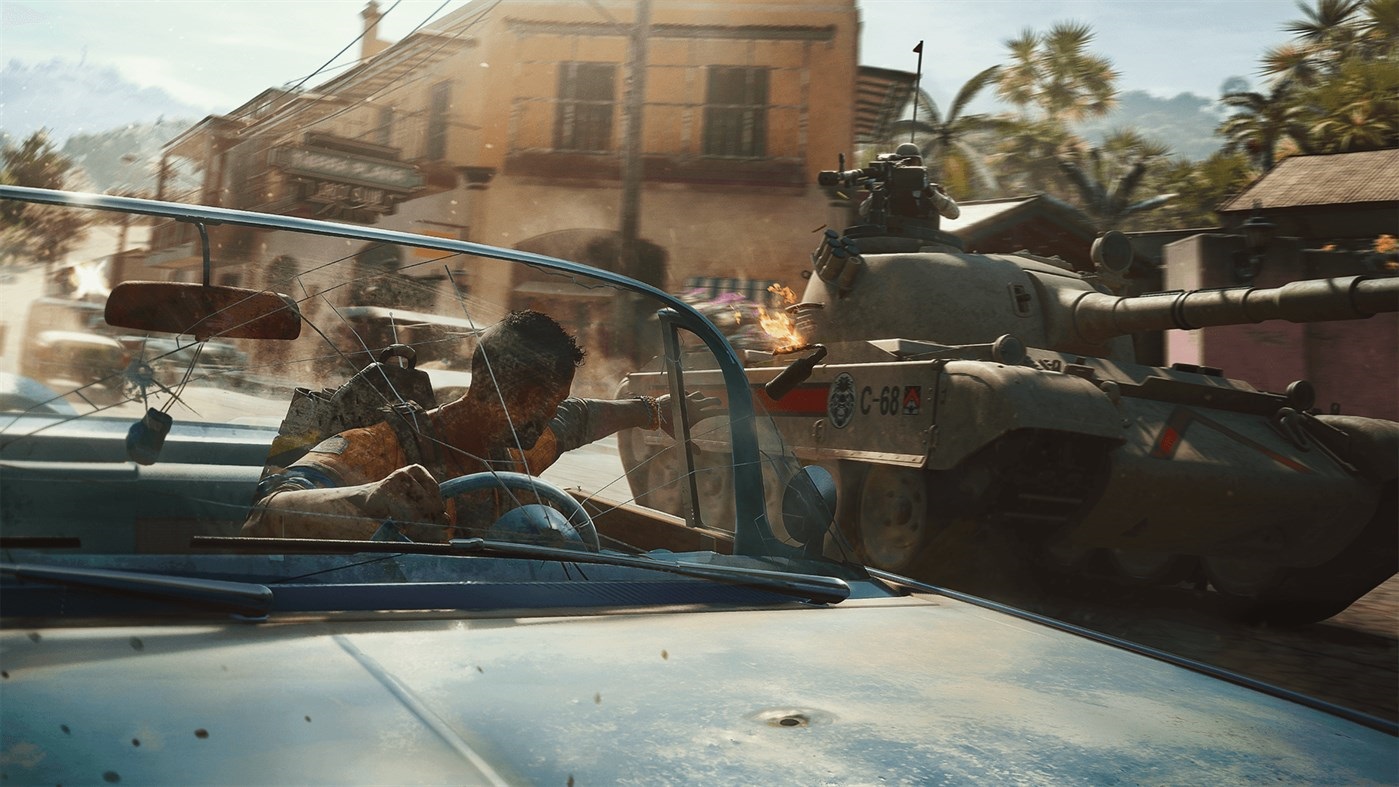 Meeting the Legends unlocks a new feature to Far Cry that will be familiar to those who played Ghost Recon: Breakpoint. The Guerrilla Camp is a third-person area that Dani can explore, upgrade, buy weapons and acquire missions. Unfortunately, there doesn’t seem to be a reason for the third-person perspective other than to check out your gear, or why captured outposts couldn’t provide the same functionality. The transition between perspectives is jarring, and it’s unclear why friendly outposts from previous Far Cry games didn’t return. At least the area doesn’t tank the performance like in Breakpoint. Our demo ended with co-op action. Far Cry 6’s entire campaign can be played solo or with a friend. There’s also matchmaking if you’re so inclined. Both players keep their progress made during the session, making it a viable option if you want to co-op the whole campaign or tackle some activities together.

Far Cry 6 feels like a callback to Far Cry 3 and Far Cry 4 with a sprinkling of some elements of Far Cry 5 and New Dawn. The story is linear, with more stakes thanks to the protagonist having a voice and personality once again. The gameplay takes center stage with a strong helping of gunplay and stealth, and the open world provides an extensive range of optional activities to pursue. RPG elements remain, though they don’t feel as intrusive as we’ve seen in Assassin’s Creed Odyssey or Ghost Recon: Breakpoint. It’s going to be a tight balancing act for the final product, but so far, Far Cry 6 is shaping up to be a fun entry in the Far Cry franchise. Ubisoft has a good story anchored by a strong villain, great gameplay and a beautiful presentation. They just need to stick the landing.