Every expansion, Final Fantasy XIV finds itself with a larger roster of jobs to progress through. Heavensward got Astrologian, Dark Knight and Machinist, Stormblood received Samurai and Red Mage, and Shadowbringers picked up Dancer and Gunbreaker. While it seems like Square Enix could be running out of unique classes, they continue to surprise us. With the upcoming expansion Endwalker, we see the Gundam-esque Sage joining forces with the dark and edgy Reaper. We were able to try out the two new jobs at the Final Fantasy XIV Media Event late last month, and our expectations were flipped on our head.

It should be stated what we got to play was an in-development build of Final Fantasy XIV: Endwalker, and content in the final version is subjected to change. That means we’ll be trying to avoid talking too much about potency numbers. With that said, there are adjustments that are so great that we can’t just help bring them up. 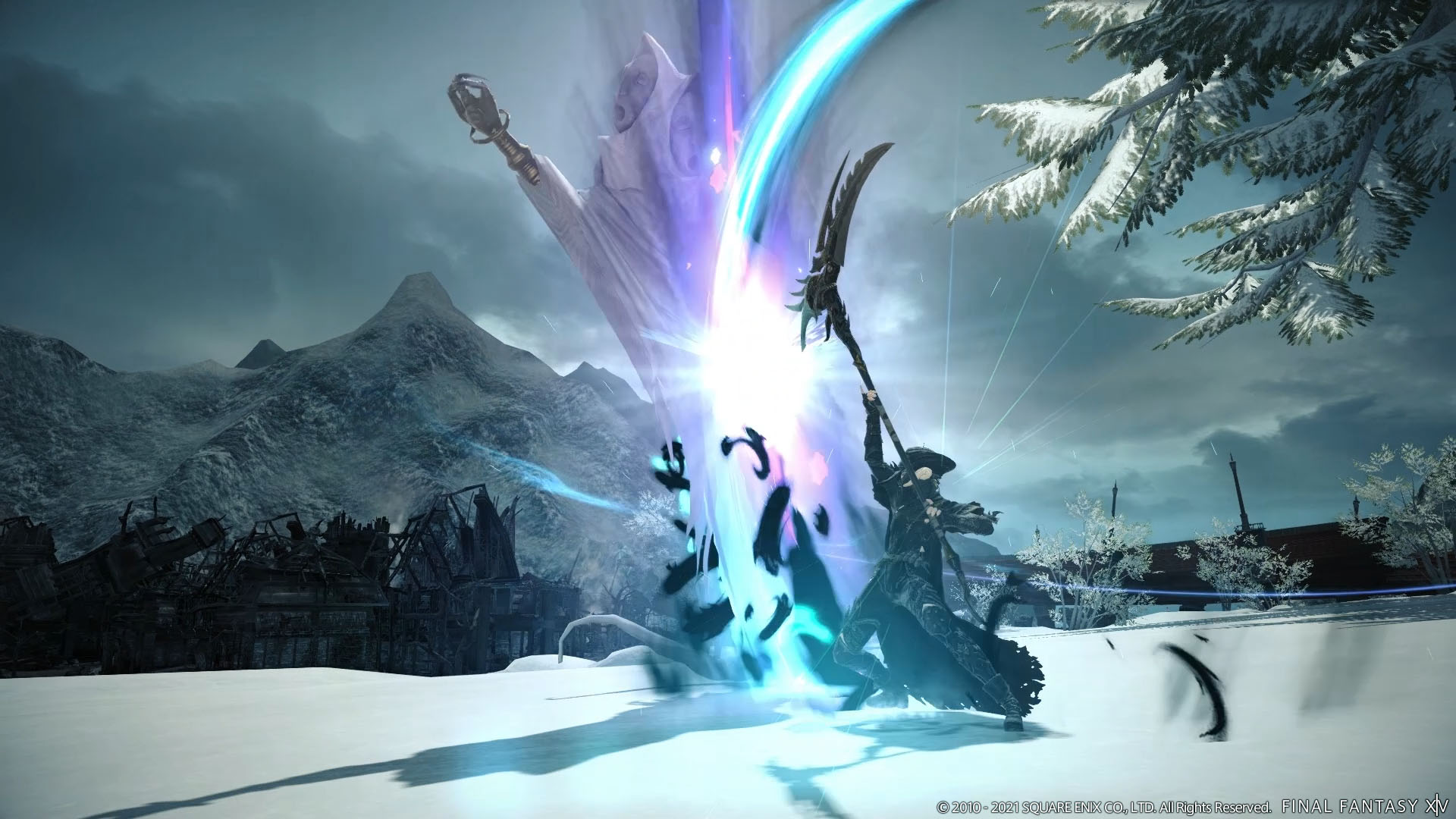 The job that everyone is talking about, and we no doubt will have an endless sea of spread throughout Old Sharlayan, Reaper is the second job coming out in Endwalker. A dark and brooding class that would make Grim Reaper proud, we had a good amount of time with it and were left wanting so much more, although a lot of it had to do with trying to understand and figure out an optimal rotation.

The core gameplay is relatively simple, comparative to something like Warrior. There’s the standard one-two-three combo which will generate a certain amount of Soul Gauge (the red meter), along with its own Trick Attack ability, although it only affects your damage. After generating 50 Soul, a Fell Cleave-esque attack is made available that grants the Soul Reaver buff (Legacy of Kain, anyone?), allowing the use of at least one follow-up attack denoted in blue, and that generates Shroud (the blue meter). This will be continuously done until the Shroud gauge is at least 50, and at that point Enshroud will be readily available, enabling a berserker mode (Inner Release-style) where the Reaper avatar, Lemure, takes over for 30 seconds.

When this happens, the blue Gibbet, Gallows and Guillotine skills will transform into blood red Reaper abilities. Here, yet another gauge will appear, this time with five stacks of blue on top of five stacks of purple. Upon using two of the new reaper skills (which extinguish the blue stacks), a follow up OGCD will appear that eats the two purple. Perform this until only one stack remains and at that point the spell Communio will be used as a finisher, a Midare equivalent, one that even comes equipped with a cast bar but also does splash damage. All of this sounds confusing and it took a while before I grasped the general rotation of it, but it’s some of the flashiest and most fun I had with an Inner Release-esque attack. Because of this, though, it seems like a busy job, maybe more so than any other melee because of the multiple gauge managements.

That’s more or less the crux of the job, though. Build up gauge with the core rotation, be it single target or multi-target attacks, maybe use some of the more unique OGCD such as an Infuriate-esque equivalent, or an attack that gives two Soul Reaver stacks, and then try to get into the Reaper state as fast as possible to do the most amount of damage. My least favorite element of this, though, is that to maintain the Death’s Design debuff on the enemy, players need to hit an individual weaponskill. I wish it was part of the actual rotation similar to, well, every other job. It could be argued that it puts a debuff on the enemy/enemies, similar to Trick Attack, but it still only affects that individual character’s damage, not everyone else’s.

Outside the main attraction, there’s at least a couple other things to look at. For starter, there isn’t traditional gap closer and disengage skills like Samurai, but the ones they have are creative. Reaper essentially jump back a certain distance, placing down a portal, in this which case allows them to instant-cast another ability (essentially a filler like Enpi), and then would use the portal to teleport back. It’s not the best system out there because you have to gauge your distance, but it’s better than something like Dragoon’s Elusive Jump which relies on having a jump attack to get back in.

There’s also Soulsow which seems to be useful at the beginning of a fight and during extensive downtime due to its the cast time. This will allow the cast of Harvest Moon (great game), kicking things off with immense damage. Outside of all that, we have a 3% damage increase buff that lasts 20 seconds and will help generate Immortal Sacrifice stacks for the Reaper based on the successful strikes/casts from party members, allowing for even more powerful attacks to be unleashed. And finally, there’s Arcane Crest which simply adds a 10% protection for five seconds, and when it pops, spreads a fifteen second heal-over-time effect to party members, something that can come in handy.

As someone who loves melee jobs, I’m excited to dig deeper into Reaper, but also relatively hesitant. We only got around an hour of hands-on time with the job, but what we experienced has us more than hopeful. It’s a busy job that will take time getting used to, especially considering that while it has elements of Warrior and Samurai, it’s its own blend of uniqueness. I do wish the damage boost wasn’t tied directly to a physical GCD and something in the rotation, but outside of that, this is shaping up to be an immensely entertaining job to play. 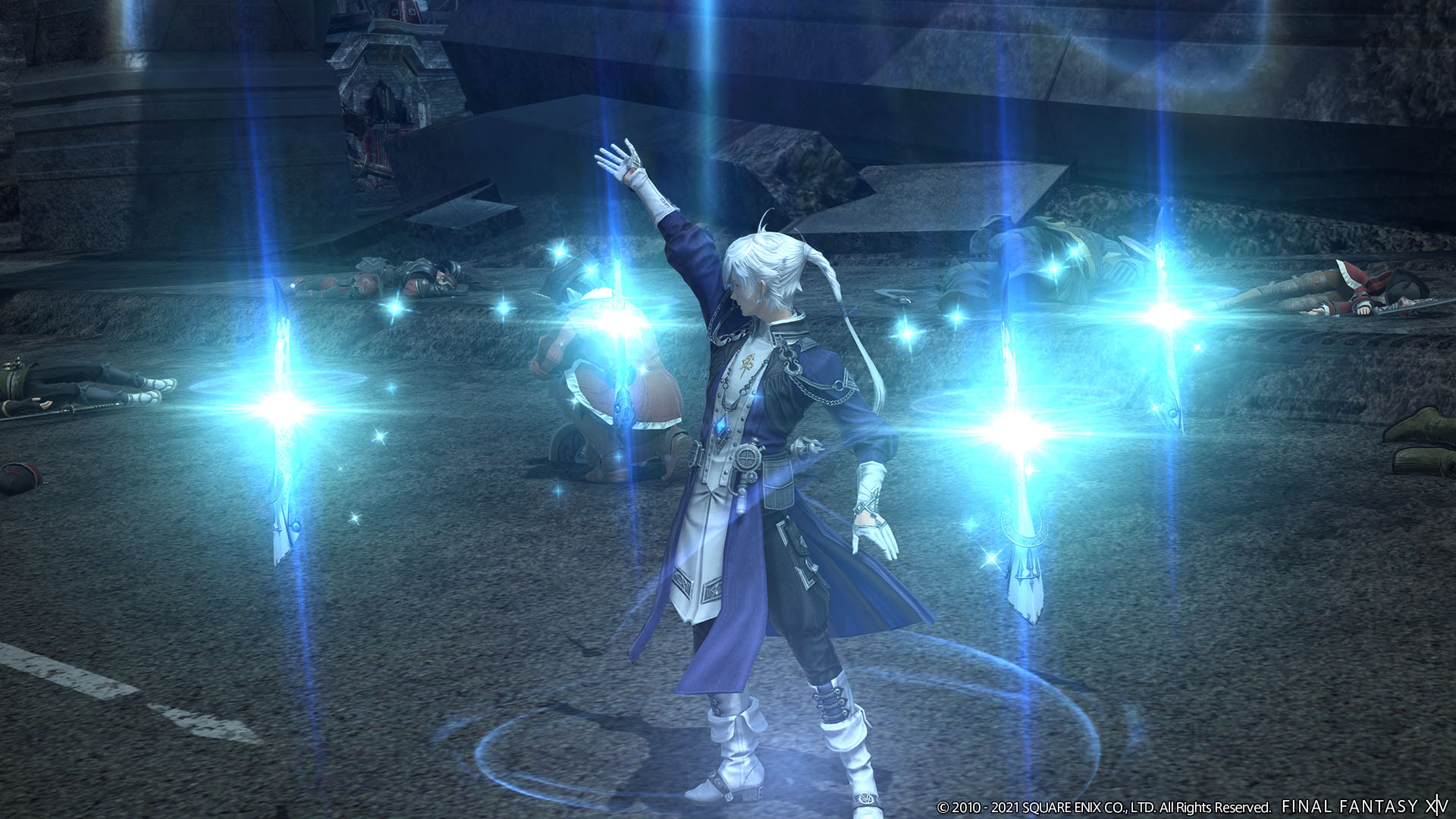 The criminal that took down Astrologian’s Nocturnal Sect, Sage is one of two new jobs coming in Endwalker, and one that took me by surprise. Sage is actually not too different from any of the other healer jobs, and is reminiscent of how Scholar works, just without a pet and a dash of White Mage’s lily system sprinkled in. What I mean by this is that, Sage works off what would be considered an Aetherflow system called “Addersgall”, but instead of generating stacks by pressing a single button, a bar fills up and refreshes one after a certain amount of time in battle – hence the White Mage comparison. There are various skills that can be used to, well you guessed it, heal and protect the party from incoming damage, as a good healer would.

The biggest element Sage has to offer is Kardion, a persistent healing component that’s assignable to another player, not too different from how Dancer’s Close Position works. The difference is of course, is that any magic attacks used will be also converted into heals for the partner – think Synastry but more violent and active. There’s a select number of abilities that will contribute to this, but considering most endgame healers mostly try to limit their GCD healing to begin with, Kardion will aid to this, not to mention Sage has more attacks than one would expect. Even though the healing isn’t massive in potency, it still will stack up.

What makes Sage unique to other healers is its modifiers. There are really only three, but it’s a surprisingly creative way in how Square Enix approached reducing clutter from the job. By pressing Eukrasia, it will be able to modify Dosis, Diagnosis and Prognosis. The standard Diagnosis and Prognosis are the equivalent to Cure and Medica, whereas their modified versions (Eukrasian Diagnosis and Prognosis) will reduce the healing effects but add shields, similar to Adloquium and Succor. Dosis is the odd one out, which is the standard damage dealing attack. By modifying it to Eukrasian Dosis III, it will become a 30 second dot. I love this system even though it does require quick thinking to properly weave and not clip. Best yet, the modified version will become insta-attacks. This is fantastic for movement, but then again Sage follows the new 1.5 second GCD standard that has been put into place, so movement has become so much easier for all involved.

Speaking of which, most of Sage’s skills are insta-casts, with only a select few that operate on the global cooldown. This has something to do with the job’s emphasis on a lot of OGCD heals. Because of this, Sage has quite a few abilities that resemble that of each healers’ skillsets but with slight modifications. For example, there’s the equivalent of Sacred Soil – just without a physical form and more of a buff, Neutral Sect’s HP potency increase, Emergency Tactics, a line-based Assize, Celestial Opposition and so forth. They’re all disguised in fancy terms and slightly modified to add their own flair. With that said, there are unique skills not found anywhere else. For example, Sage has a gap closer called Icarus, being able to dash within 25 yalms to an enemy or comrade. It also has two charges of a powerful splash attack, an AOE that eats an Addersgall, and a two unique single-targeted shielding that can essentially replaces itself upwards of five times. While there are overlapping concepts, taking the best of all worlds, it has its own identity.

I was completely taken back by Sage. Even though I mained White Mage all through Stormblood, I’m not a big healer when it comes to end game content. Sometimes I dabble with White Mage and Astrologian, but my preferred roles are DPS or Tank. That might change with Sage, or at least open my eyes to whole other possibilities. One of the biggest and best parts of Sage is how few buttons there, and for a controller player, this can be a make or break component. It’s surprisingly intuitive and easy to pick it up, with a persistent Synastry-esque ability that goes off of the amount of damage dished out. I thought I would be more invested in Reaper, but here I’m gushing about the possibilities Sage has to offer.