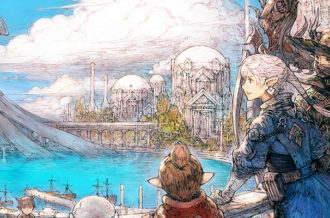 After Seven Hours, We Scratched the Surface of FFXIV: Endwalker

Taking the blows that us squishy DPS and healers cannot, Tanks are at the forefront of any party. They lead the charge into the unknown and ensure that you take as little damage as possible while the boss’ damage is mitigated. In the upcoming fourth expansion, this role isn’t get a significant overhaul in comparison to a lot of DPS and at least one healer, but there are surprising changes to the rotations of Dark Knight and Warrior, along with even more mitigation unification.

It should be stated what we got to play was an in-development build of Final Fantasy XIV: Endwalker and content in the final version is subjected to change. That means we’ll be trying to avoid talking too much about potency numbers. With that said, there are some adjustments that are so great that we can’t just help bring them up. 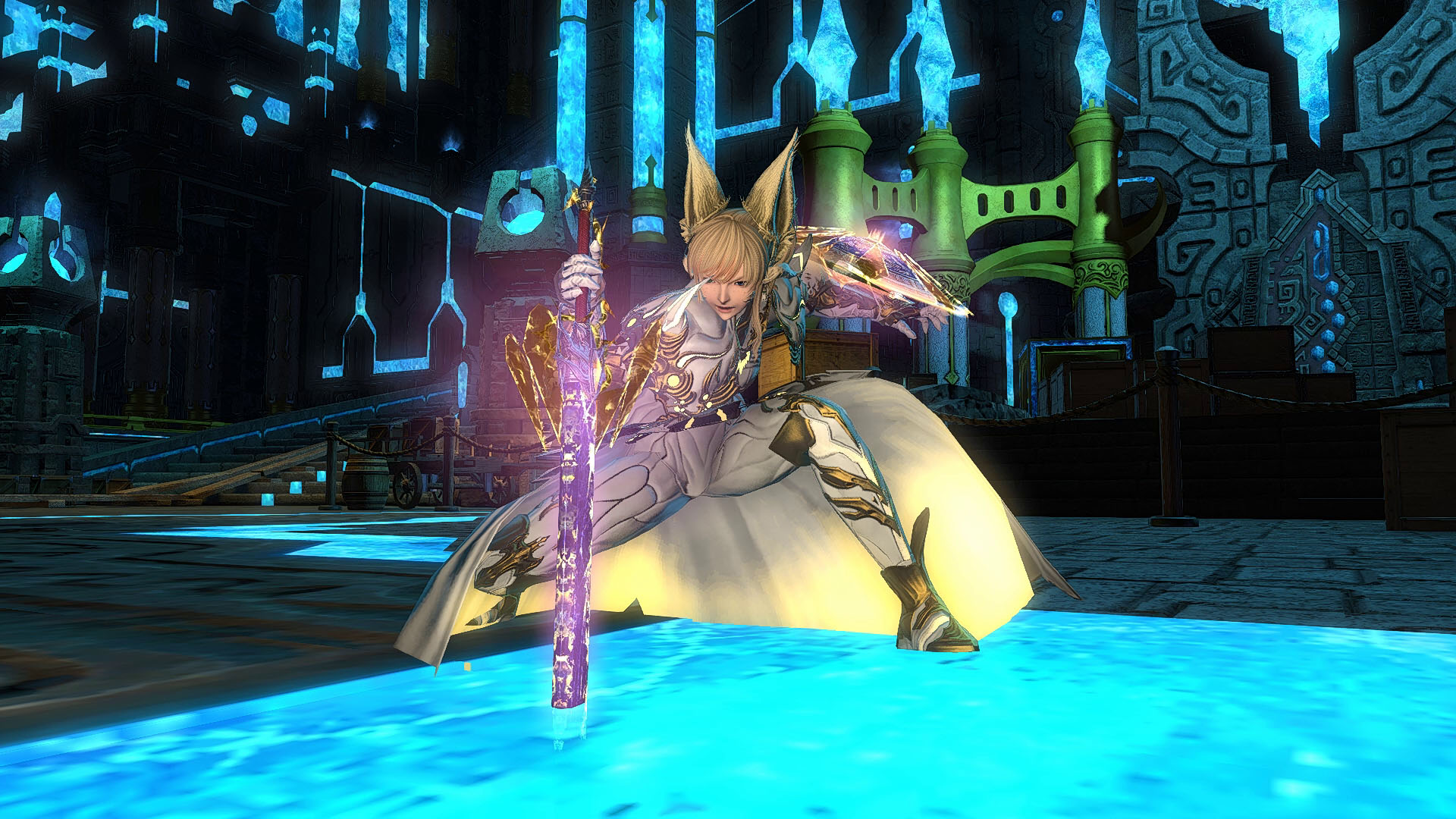 Let’s start with the poster child of Endwalker, and one that I believe Square Enix has done a masterful job adjusting. They have ensured that no new attacks are actually added to the hotbar, but everything is enhanced or altered in meaningful ways.

Firstly, at level 82, Sheltron will be turned into Holy Sheltron, which adds an additional 15% damage reduction for 4 seconds and a 12 second heal-over-time effect. Intervention has been buffed at level 82, now affecting the target for slightly longer, along with adding two additional effects that are noticeably similar to Holy Sheltron. Holy Spirit and Holy Circle will now heal on every hit at 84, ensuring the magic rotation will be less taxing on healers. Spirits Within’s damage is no longer gated by how much health the player has and is a simple OGCD that Restores MP. In addition, it’s changed to Expiacion at 86, hitting for more and surrounding enemies. Divine Veil mostly stays the same, but now restores 400 potency of HP to its targeted player at level 88.

Requiescat has been reworked to now last for 30 seconds along with damage and insta-casts no longer being held behind an MP wall. Instead of trying to stuff everything in a twelve second window, five stacks of Requiescat are granted that deal two times their magic damage. This ties directly into the new Confiteor rotation. After using up 4 stacks on Holy Spirit (or Holy Circle), Confiteor is supposed to be the finisher, but now this is followed up with three additional Confiteor attacks, Blades of Faith, Truth and Valor. These actually deal less damage than the traditional Confiteor individually, but each has bonus effects, such as restoring MP and applying a 21 second dot that can be applied to a mob. It’s one of the most satisfying and visually-stimulating combos found in the game.

After having an extended amount of time with the job at the Media Tour, I might just move from Warrior to Paladin as my preferred tank class. Square Enix has put a lot of attention to their post child that it almost seems overpowered. Even if it isn’t, it’s more fun than the adjustments that have been made to all the other tanks. Speaking of which. 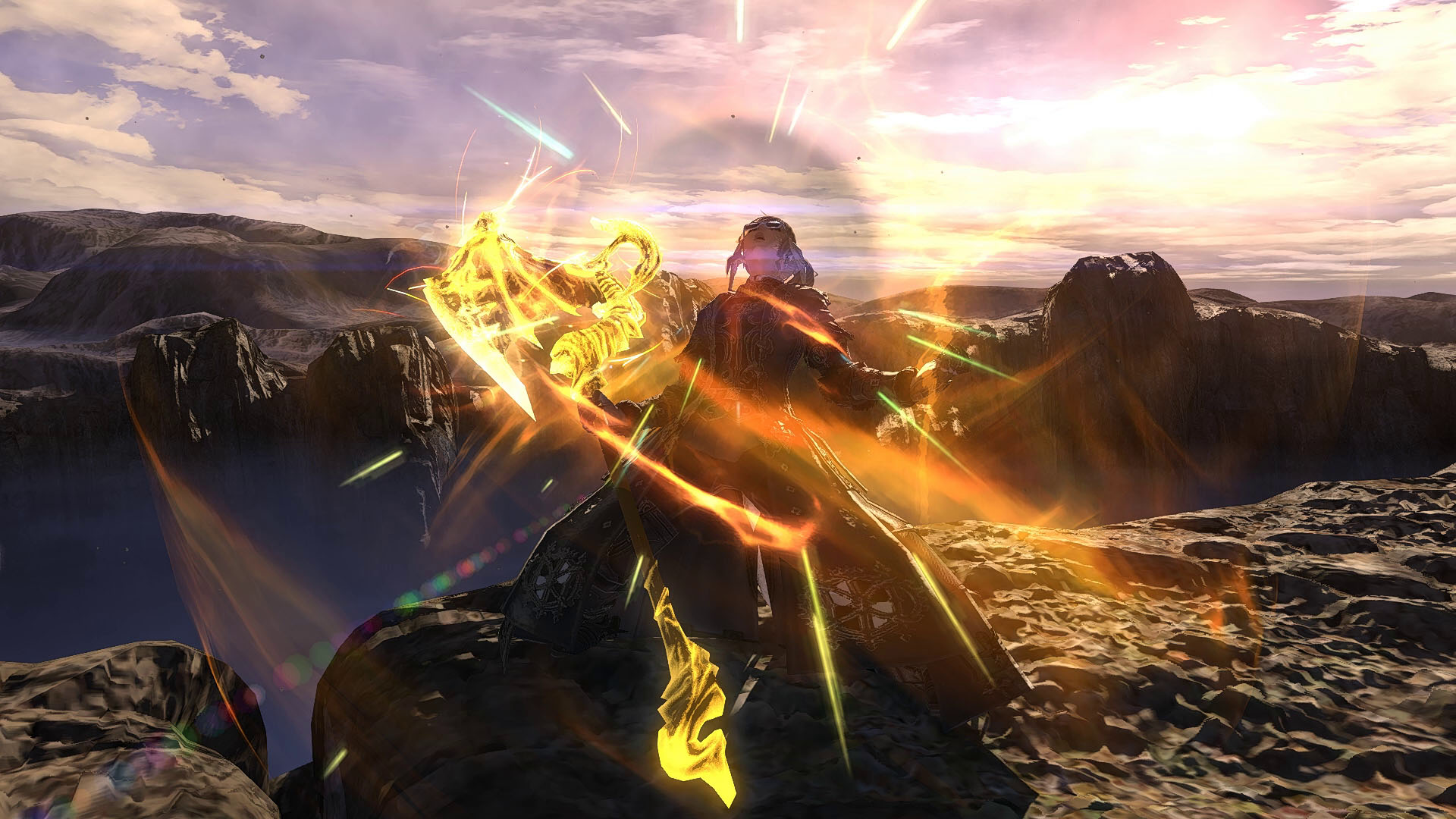 One of my personal favorite jobs purely for it having the least number of buttons on its bar, Warrior isn’t seeing the massive changes Paladin is getting, but enough modifications where there’s more than enough to dig through. The big adjustment is without doubt Inner Release no longer being a ten second window to fit in as many Fell Cleaves as you can. Instead, players will be given three guaranteed critical direct hit Fell Cleaves (or Decimates) that can be used within a 30 second window. This will no longer affect other moves such as Onslaught or Upheaval as these are now OGCDs instead of actions that require gauge. I don’t actually know how to feel about this as there was a certain satisfaction in lining up the two skills within the Inner Release window, but now there’s not much thought to it, especially with the charge attack which can just be spammed as it’s up to 3 charges.

Raw Intuition’s damage reduction has been reduced to 10% from 20% with a 400 potency cure when used. This is upgraded to Bloodwhetting at 82, adding an additional damage reduction of 10% for 4 seconds and a barrier that absorbs upwards of 400 potency for 30 seconds. If you’re feeling generous, its counterpart Nascent Flash will be able to transfer the same effects to its recipient at level 82. Unfortunately, it looks like that Nascent Glint will no longer be as overpowered, as it’s suggested that there’s now a 400 potency ceiling for every hit the targeted player performs instead of being based on the Warrior’s own damage. Outside of those changes, Holmgang is now 10 seconds long, which is important in a fight such as The Epic of Alexander where it’s tight, Shake it off now restores HP to yourself and party members, Equilibrium adds a 15 second heal-over-time effect, and most importantly, the two-hit AOE combo will apply the damage up Storm’s Eye (now renamed Surging Tempest).

There have been two added abilities, though unlike Paladin, add even more actions to your bar. On the positive side, it’s not like Warrior had an excessive amount of actions to begin with. For starters, Orogeny is the new punchy OGCD that shares a cooldown with upheaval, but instead is an AOE attack, something only truly utilized if there’s three or more enemies on screen. Lastly, Primal Rend is what has been advertised as Warrior’s big finisher; while it’s not the Confiteor killer by any means, it deals an incredible amount of damage, more so than Inner Chaos now. The only thing to consider is that it can only be used after going into Inner Release and lasts thirty seconds.

Outside of all that, the only potency value that has us concerned is Inner Chaos, which we saw roughly a 42% decrease in damage output, but we’ll see the final values at launch and how the scaling has affected everything. There has been  solid quality-of-life adjustments made to its mitigation whereas, outside of Primal Rend, it’s not exactly the flashiest of the four tanks when it comes to new abilities. It’s something we’ll need more time with in specific content to get a feel of how these flesh out, because the Inner Release change is going to change the flow of the job. 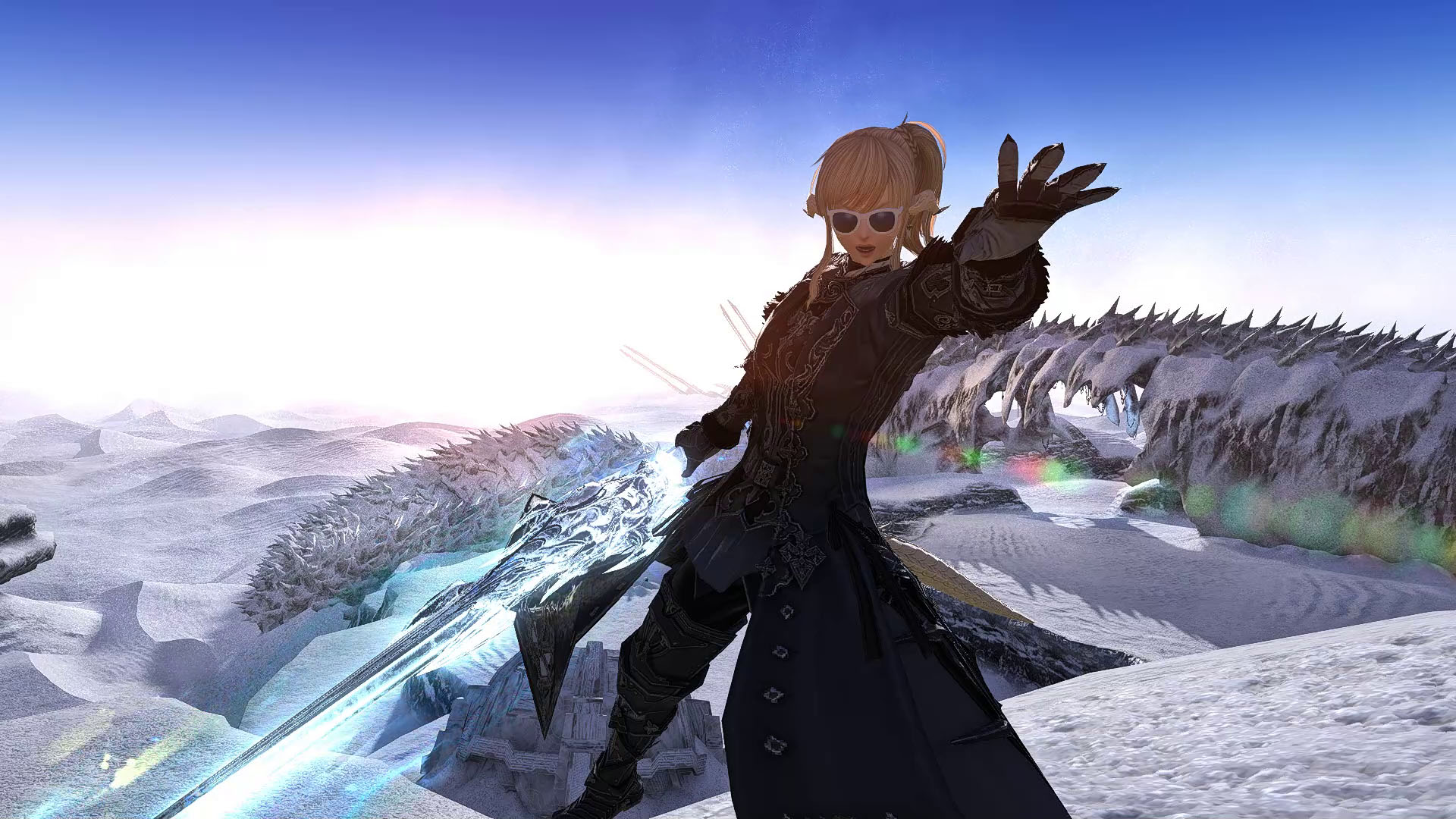 Not a whole lot has changed with Dark Knight, unfortunately. The only major damage reduction seems to come in with Flood of Shadow going from 300 to 160 potency, with others seemingly being unremarkably adjusted. Outside of that, the only major change is Delirium which, similar to Warrior, now simply allows the use of three Bloodspillers or Quietuses within 30 seconds, on top of it being now a 60 second cooldown. Salted Earth will now appear below your feet instead of placed manually, but you’re able to essentially detonate it with the level 86 Salt and Darkness, dealing massive damage to everyone afflicted. Lastly, using Unmend will reduce Plunge’s cast time by 5 seconds, but if you’re greedy enough, you rarely should be using Unmend to begin with. At least they ensured casts like these will no longer interrupt combos.

As for new skills, there’s a new damage mitigation called Oblation which grant you or another party member 10% damage reduction for 10 seconds and has two charges. The most I can say about that is that it’s unremarkable at best; it’s an extra solo mitigation but with no bells or whistles. Shadowbringer, which is an appropriate skill for the job, is an OGCD with two charges that deals a devastating line AOE. This new ability can be done by Living Shadow in place of Flood of Shadow.

And that’s more or less it. I personally think Dark Knight got a raw deal in Endwalker. The Salted Earth adjustments will make fans happy, but there are barely any adjustments to existing skills, and the new abilities are minor at best to a job that needs more attention. 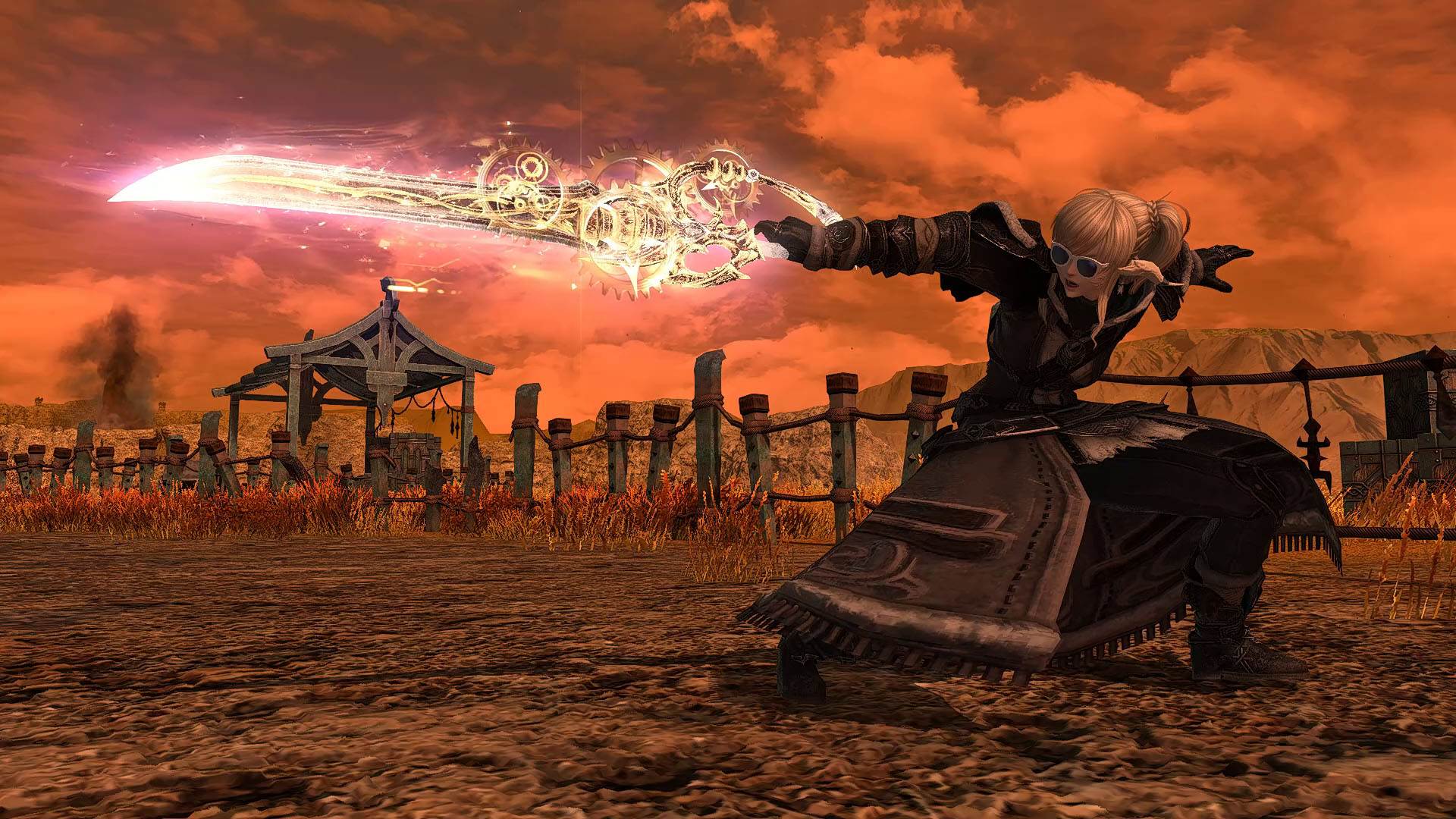 Introduced in Shadowbringers, Gunbreaker has received some of the better quality-of-life improvements while not altering the job too much. The biggest change by a wide margin, especially for us controller players, is the Gnashing Fang combo is now a single button instead of three. As soon as Gnashing Fang is pressed, it will change into Savage Claw, and then that will transform into Wicked Talon upon using that. It’s so much better and reduces the amount of clutter on the hotbar. On top of the Gnashing Fang combo, at level 86, Burst Strike will receive the Continuation follow-up attack Hypervelocity, which is just another weave that flows together well. Granted, Gunbreaker has a frantic opener in comparison to most tanks, but this feels like the natural evolution of the skill we could have hoped for.

Outside of the Continuation and Gnashing Fang combo changes, Superbolide now lasts two seconds longer, Aurora has been given two charges at level 84, and Heart of Stone is transformed into Heart of Corundum, which will add an additional 15% damage reduction for 4 seconds on top of restoring HP to your target if their HP falls below 50% (or the 10 seconds run out). Finally, at level 88, there’s a third cartridge added to the gauge, which comes with Bloodfest also refreshing three instead of two. This ties into the brand new, ultra-powerful attack Double Down. This is a 60 second cooldown that surpasses all the other tank’s new powerful abilities with a staggering 1,200 potency and only a 20% falloff to enemies around. The trade-off is that it requires to cartridges, which to be honest, is not too difficult to get to begin with.

The big takeaway with Gunbreaker is that’s still a powerful tank and its interface just feels a lot cleaner. While we gain one powerful attack in Double Down to add, we take away two in the process, with the rest of the actions replacing or merging with existing skills. I would have liked to have seen maybe a bit more healing potential added to Heart of Light or other attacks, but at least we get a second Aurora charge and Heart of Corundum on top of the existing Brutal Shell.

As you can see, Gunbreaker and Dark Knight both receive few changes to their jobs. In Gunbreaker’s case, it’s in a good place currently so the developers didn’t necessarily need to change much, more so just refine what they have, whereas Dark Knight they need to do a little more.