Welcome to Goat Simulator, the tech-demo turned internet sensation. Don’t bother taking your shoes off, either. Respect in this house is negligible, and the only rules begin with “O’Doyle.” When Coffee Stain Studios first posted their video of Goat Simulator online, there was a shift in the space time video game continuum. Players, previously accustomed to cinematic experiences, action-packed shooters and, you know, games featuring human protagonists, weren’t quite ready for the mind-bending glitch-fest that is Goat Simulator. Neither was the studio responsible.

In the short period of time between the video going viral and Coffee Stain Studios announcing that it would in fact be released to the public, a lot of requests — likely spoken in jest — were posted across the web. Folks demanded that Goat Simulator be made playable, and rather than ignore the pleas of gamer’s and shift back into their daily routines of crafting various farm animal simulators, the developers remembered that curiosity killed the cat, not the goat. Some months and a lot of — what we believe to be — alcohol induced laughter later, we had the first official showing of Goat Simulator at the 2014 Game Developers Conference. 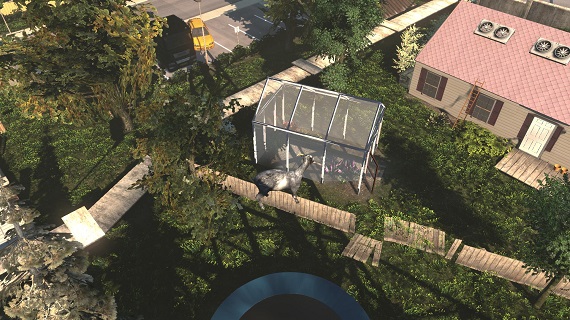 Let me clarify: Goat Simulator isn’t a joke. Well, it is a joke, and there is a punchline, but it’s not your traditional run-of-the-mill comedy. It’s a real game, with real missions to complete, trophies to earn and a $10 price tag on Steam. The joke bit comes in the form of its gameplay. In Goat Simulator, the goal is to wreak as much havoc as humanly — I mean, goatanly — possible. You do so by headbutting things, licking stuff, smashing everything, and jumping on cars, people and buildings. It’s all about momentary amusement, and that sort of instant gratification goes a long way when you’re an unrealistically overpowered goat.

There’s an arcade-style score system that rewards destructive silliness, and combining different acts of chaos will help push the numbers ever-higher. The open-world style map offers plenty of room, objects, humans, obstacles, cars, trampolines and climbable structures for your shenanigans — the developers don’t just suggest that you goat crazy, it’s downright encouraged. As with most modern games, there are single player objectives, and of course, plenty of silly achievements to unlock. But gaining a high score or “completing” missions isn’t really the point. Speaking with Armin Ibrisagic, the co-creator of Goat Simulator made that abundantly clear. “It’s kinda like a skating game except instead of skates you’re a goat, and instead of tricks you do stupid s***.”

However, Goat Simulator is stupid on purpose, and every aspect of the game that is “broken” was kept so for comedy’s sake. While Ibrisagic assured us that many of its nagging glitches will be repaired before launch, things such as the goat’s umbilical-cord neck and shaky sprint animations are unlikely to change. “It’s part of the fun” is something we heard quite a bit while demoing the title, and it’s true: trapping the goat’s head in a fence until it skyrockets across the map is, by all means, fun. And it seems Coffee Stain Studios wouldn’t have it any other way. 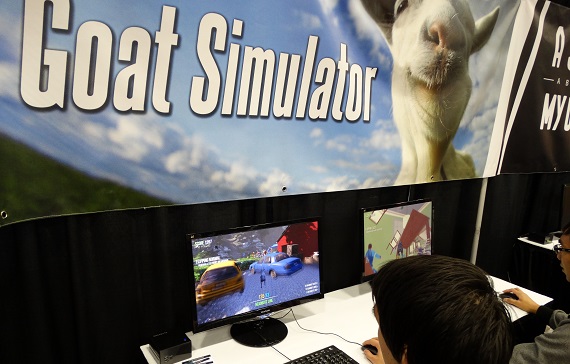 There’s an enthralling cartoon-like characteristic to the game’s mayhem, as well. Flying through glitching objects after exploding a car with a headbutt may seem faulty on the surface, but it’s part of Goat Simulator’s charm — and core mechanics. The only issue it will suffer is that once the trophies have been chuckled at, and the missions have been thoroughly experienced, Goat Simulator will likely serve as a 10-minute giggle fest for company to enjoy while you’re waiting on the Battlefield 4 servers to reset. Coffee Stain Studios knows this, and intends on remedying the issue by providing full Steam Workshop support.

The simulation aspect of Goat Simulator may be a bit Gruff around the edges, but anything remotely realistic would have us grazing on capeweed for 12 hours before crashing in a rickety wooden shed. Coffee Stain Studios managed to balance humor and novelty without sacrificing much in the way of gameplay. There may be no cliffs to traverse, or tasty grass to drool over, but Goat Simulator is the best game about being a powerhouse super-goat living in a city full of panicky humans and random trampolines. And that’s saying something.

During the Game Developers Conference 2014, our Executive Editor Adam Beck enjoyed some hilarious hands-on time with Goat Simulator. Here are a couple highlights. Note: The game was showcased on the expo floor, and thus is subject to loud background noise and bystander commentary.

Above: Explosions clearly mean nothing to a goat. Neither do fences, cars or walls. In Goat Simulator, you’re virtually indestructible. Glitch got you stuck? A quick press of a button teleports you out of a jam and back into the action. Of course, it’s not long before you end up in another jar of preserves.

Below: As in nature, goat’s climb using their neck… and experience no fall damage. There are few environmental restrictions in Goat Simulator; the world is, quite literally, your playground. You can run, jump, headbutt and lick nearly every object or obstacle. Even humans are but mere pawns in your twisted game of glitches.

The release date, April 1st, is anything but a joke. The company wants to retain the state of confusion that catapulted their simulator to the forefront of curiosity. “We want people to think it’s a joke for as long as possible,” said Ibrisagic when asked about the importance of Goat Simulator’s release date. The bugs, too, are part of the experience, and are “so hilarious” that their removal would be damaging to the game’s appeal. There’s a lot to love about Goat Simulator — the freedom, glitches, explosions and wacky physics all come together seamlessly. With Workshop support, and the inevitable barrel-full of mods, levels, tweaks and twists that crafty players will conceive post-launch, there’s a lot to look forward to. As best said by rapper Eminem, “you better believe the hype is real.”