Lengthy development times can be frustrating for both the development team and eager fans alike, but there have been enough bug riddled game launches that it might be better to allow some extra time in the oven to ensure a quality final product. Sometimes this cycle can make the final product be something completely different than what was originally intended, which can often more than make up for the wait. The upcoming Kingdom: Two Crowns is the third entry in the Kingdom series, but originally it was simply meant to be an expansion to Kingdom: New Lands. It has since developed and grown enough where it is no longer a fitting expansion to an existing game but it is now something that is ready to stand on its own.

Like the other Kingdom games that came before it, Kingdom: Two Crowns is a resource management simulation that looks like an old school side scroller. Using very limited resources and coin, the players are to build up their kingdom. This can be done through the construction of walls or hiring archers to keep all threats outside where they belong. A day night cycle gives some semblance of regularity to the managerial duties of the kingdom. Basically daytime is when it is safe to venture out and try to collect resources, and night is when it is best to go back to the safety of the the royal settlement. 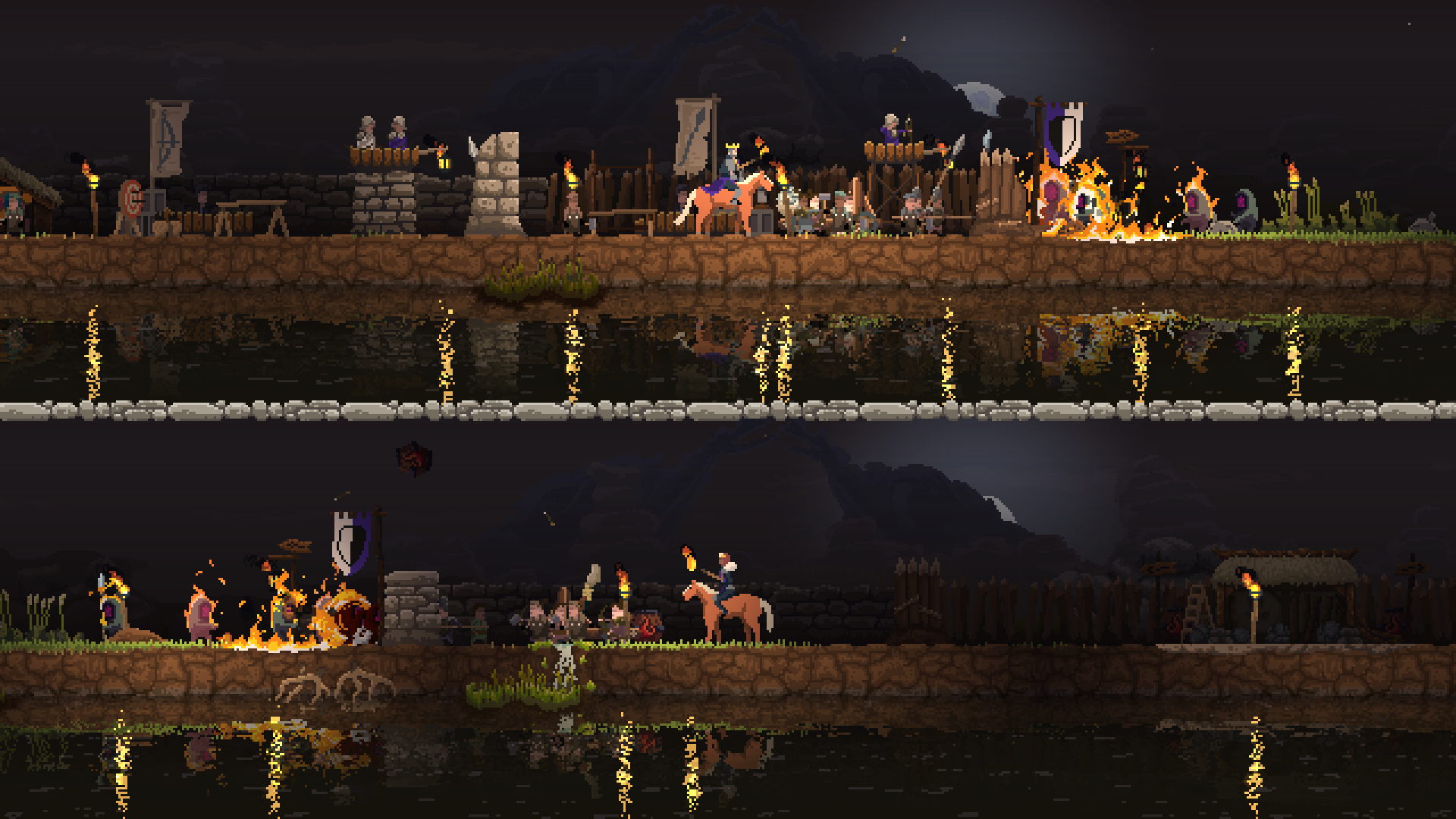 Kingdom: Two Crowns looks like a natural evolution of the series but the screenshots reveal one major update, and that is the addition of local co-op with one screen controlling the king and the other controlling the queen. The short time with the demo at GDC didn’t allow enough time to properly explore everything two player co-op offered, but it definitely made for a more enjoyable experience. Playing with a stranger can always be a bit strange, but the nature of the game forced us to interact with each other. We ended up giving each other coins in order to purchase more units for kingdom development and went exploring. During the excursion one of us freed a dog from under a tree which followed us around like a pet, with naturally the person who freed the dog bragging like a jerk the dog truly belongs to them where the other player ended up swapping out their horse for a bear they could ride which was useful at attacking the impish enemies that started harassing us. Sadly, the bear calvary came too late as the pet dog had already been kidnapped by one of the goblin looking enemies, but that could be karma for that player’s obnoxiousness (Editor’s Note: Chris was the one being a jerk about the dog.)

The graphics are definitely inspired by retro titles but also use some techniques to appear more modern. Even though they are as pixelated as anything you’d find on a cartridge prior to 1992, the animation is extremely fluid, which is greatly appreciated on the split screen, especially when the two players are traveling in opposite directions. Reflections in the water and other visual tricks with lighting effects help make this title look more contemporary while embracing the 8-bit aesthetic. Simply put, this is a prime example of how to do the old school look correctly. 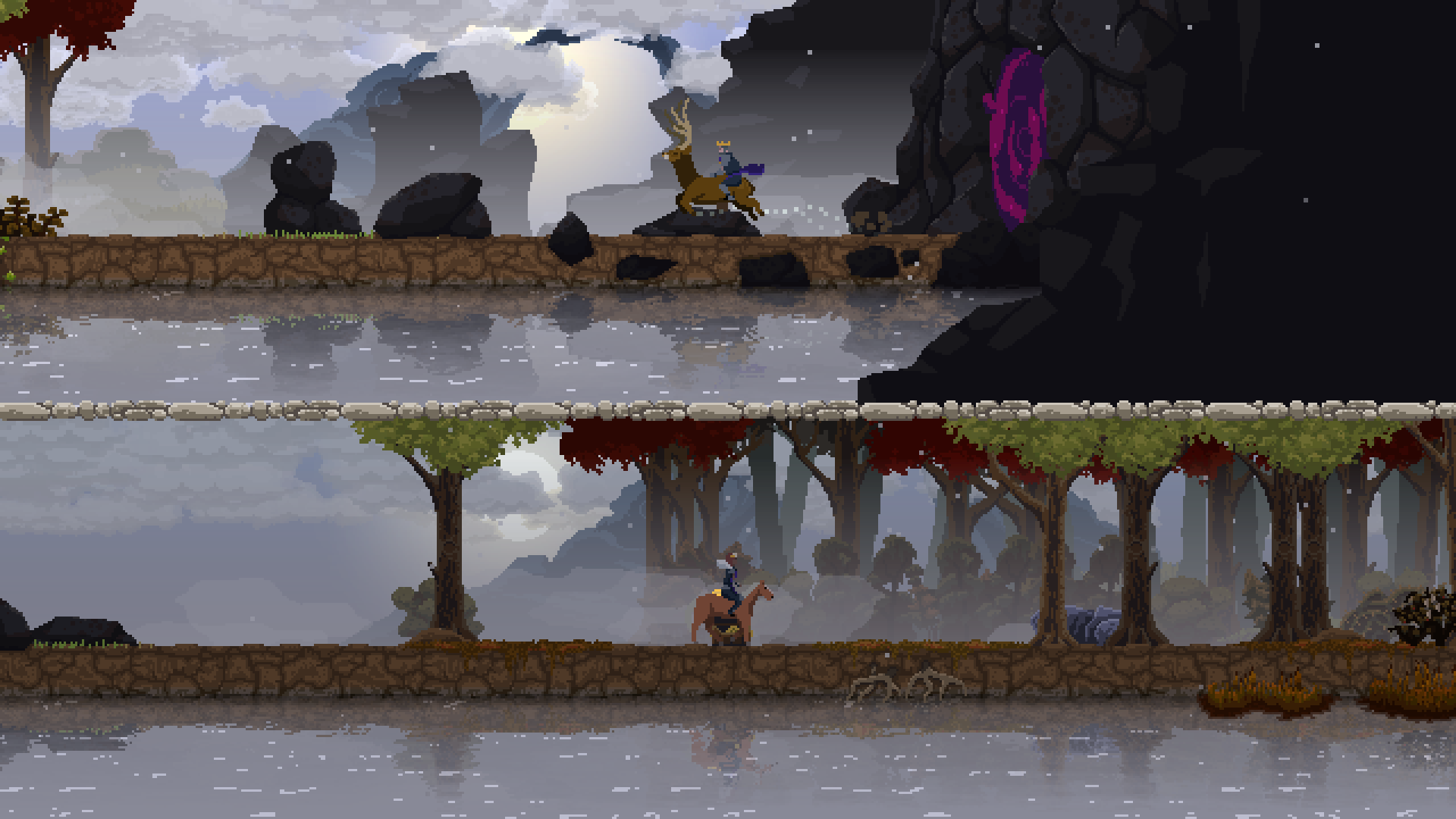 Kingdom: Two Crowns does not have a confirmed release date at this time, but whatever your platform of choice happens to be, this will able available to you as it is coming to Xbox One, PC, Switch, PlayStation 4 and mobile devices. Fans of the existing Kingdom games probably already have this title on their radar, but the short time spent with this title did cause it to pique my interest. What was most noteworthy on a personal level was how well the two player aspect fits into the game and it’s easy to see this being an enjoyable title in regards to local co-op.