Gestalt: Steam and Cinder was shown off with a trailer a few days ago ahead of its demo release and offers up something a bit different. We’ve seen a million Metroidvania-style games on the market. In the 23 years since Symphony of the Night truly changed the platforming genre forever, there have been homages to that or Metroid and few truly unique takes on that kind of game. Most focus on the action and don’t expand on the world or its characters a lot — which can work if you have a lot of gameplay variety, but usually winds up being a lost opportunity in even some of the best games out there.

Gestalt’s trailer showcased a game with fast slicing and dicing alongside some shooting, while the demo adds much-needed context to the goings-on of the adventure. In it, Aletheia is recovering from being taken out of action due to injuries and has to get her sea legs back. You’re sent on a small quest to find a friend to get your mission, but have a surprising amount of free time before and after that point. You can just go to your friend and take on the mission or you can meet him to start the process and then immediately leave and explore the town. This part of the demo is a lot of fun because it shows just how much world-building is being done. 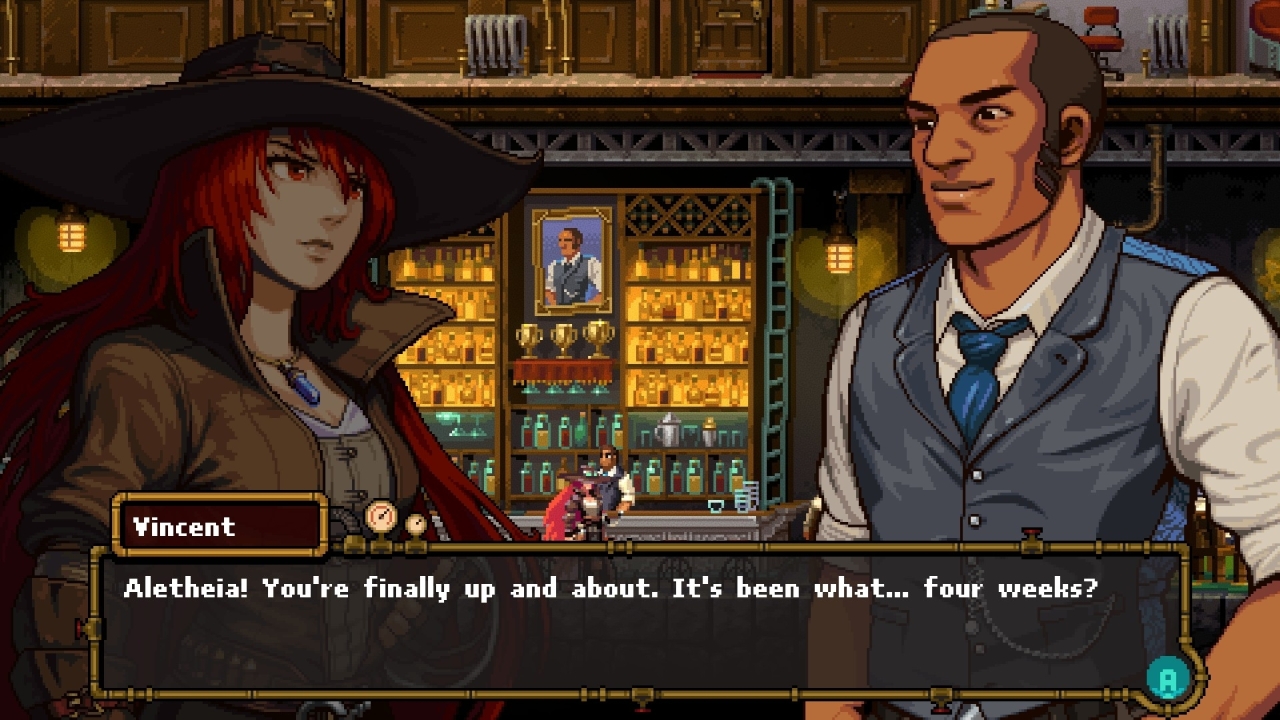 In just this single-stage demo, you have the ability to meet up with a rich dude and tell him off — or hear him out to at least be nice about it. You can even chat up bystanders and find out about their lives. Going into the single stage offers up a fair amount of variety on its own. You’ll start off with punch-based enemies that teach you how important timing and patterns are to survival as each shot of theirs can substantially knock your health down. After toppling them, you’ll face off with bigger goons with both an acid vial and large, sweeping pipe attack. Jumping after them is a recipe for disaster thanks to the former, while going in without a plan leaves you vulnerable to being bashed.

Planning ahead allows you to pick between a weak slash with X and a hard slash with Y or using some of your limited ammo to blast foes. The core combat feels much like Strider with fast slicing and dicing allowing you to kill foes quickly by getting behind them after their move combo starts and if you’re lucky, taking them out in one combo and maybe throwing in a hard slash to get an overkill. The pacing of each kind of attack is smart in that you can mentally time everything out before doing anything. If you jump in front of an acid toss, you’ll take at least damage from that and possibly be thrown into an area to be attacked by another enemy. 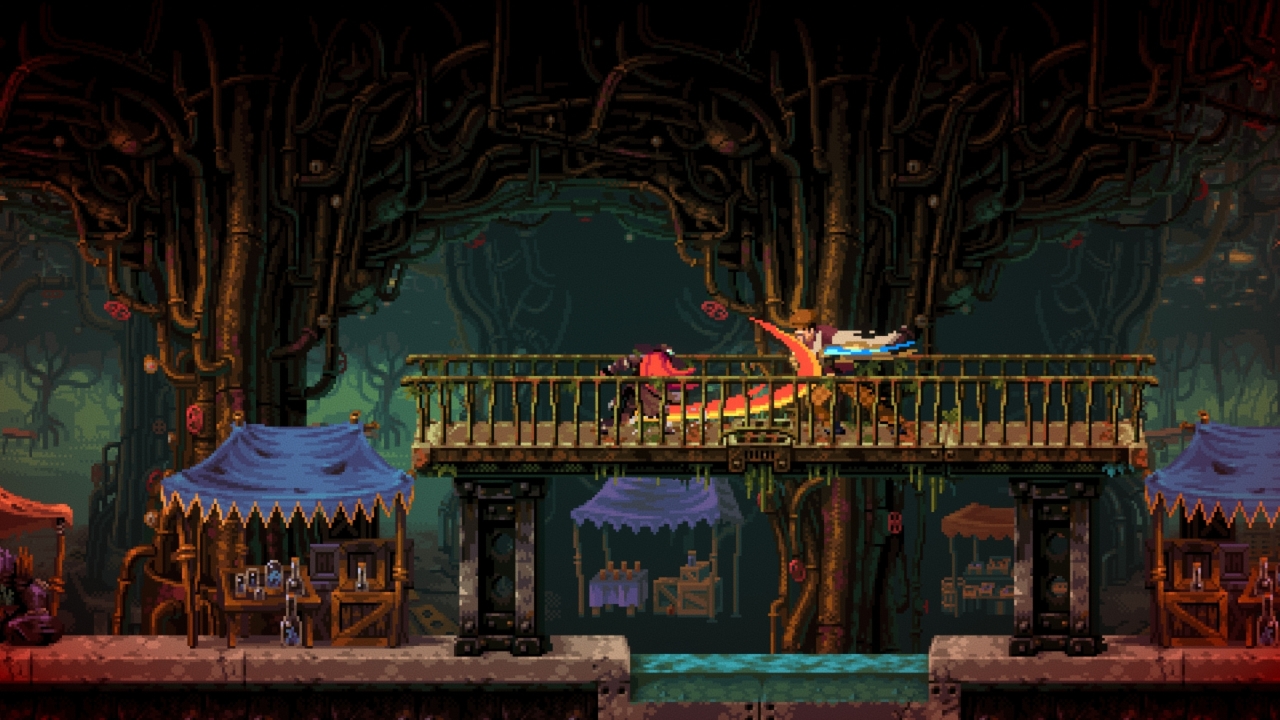 If you do a jump and then go back to the original platform, however, you can get a head start and land a quick blow before scurrying up a ladder to attack from behind. Likewise, switching between quick and heavy attacks enables you to take foes out in rapid sucession and if you want, you can finish them off with a gun blast. You really want to hang onto your ammo, though, since that’s the only truly long-range attack you have. The fast attack doesn’t cover much ground, and while the heavy slash does, it’s not a radical difference in distance — it just does more damage in a single, slower blow. The gun is best saved for the demo’s boss fight as he leaves himself open for rare long-range attacks.

One great thing about the demo’s design is that if you feel underpowered, you can go from a save point to a different part of the hub world and explore that. This enables you to see areas like a blacksmith or interact with new characters before going through the starter dungeon area again to stock up on either health pickups or just level up your character and revamp your stats before tackling the boss. Having a few healing items is always smart since he can dole out damage in large numbers in short periods of time and beating him is rewarding. 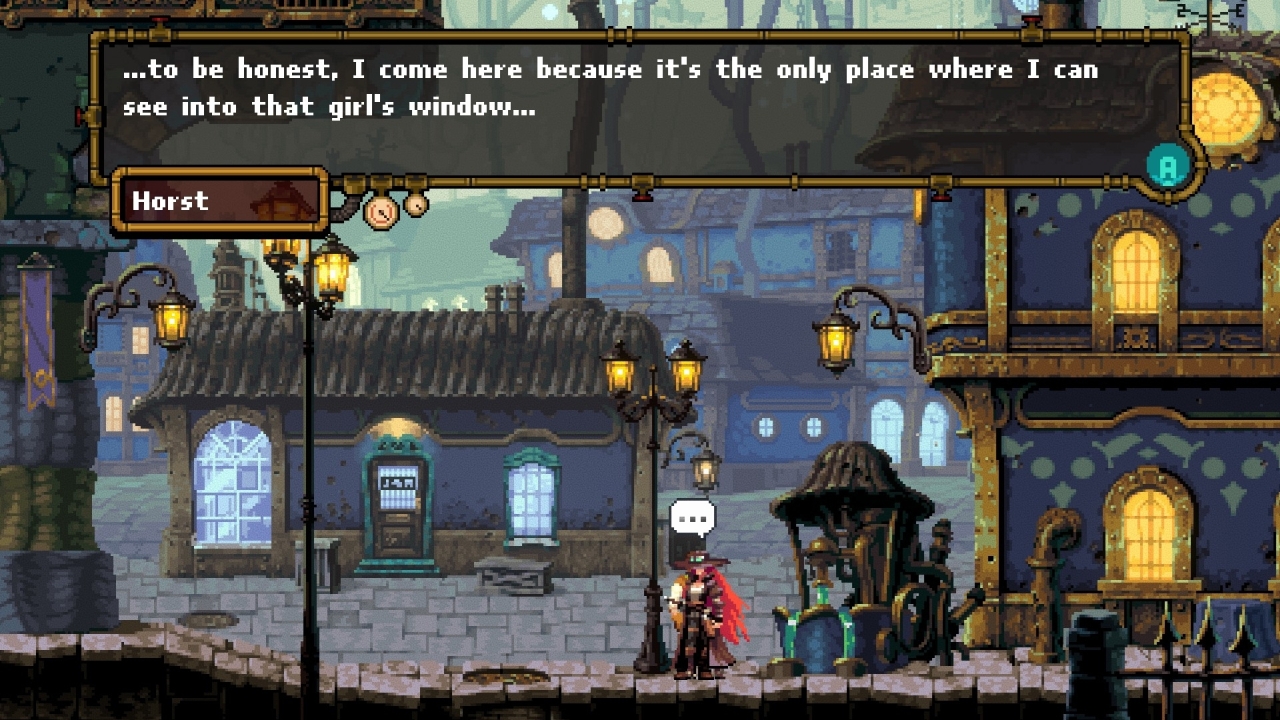 Even in an early stage, Gestalt shows great promise in all areas. Visually, the pixel art world is full of detail and life. The environments have a lot of real-world lighting in them and small touches like photos in the bar of the owner alongside rows of liquor help make it feel like there are stakes going on and your actions help the citizens. Animation is also impressive for your attacks and it will be interesting to see just what gets added in weapon-wise for the full game. As it is, having swords and a gun helps keep things fresh, as does the more strategic platforming.

Gestalt: Steam & Cinder is set for a release later this year and it shows incredible promise. In a crowded genre, it does something different and does it well. The steampunk look is fantastic and the detailed pixel art is some of the best in a Metroidvania, with a realistic-looking world aiding in the stakes of your adventure. We’ll be keeping a close eye on the release and look forward to seeing the game itself progress as time goes on.