It is the 90s and there is time for Klax.  And also Doom, Quake, Star Wars: Dark Forces, Duke Nukem, Heretic, Goldeneye, Descent, Terminator: Future Shock, Turok, Powerslave and endless dozens more.  Klax may have been a bit off about the tone of gaming in the 90s, but Strafe has the power of 20:20 hindsight so has a much easier time of getting it right.  It actually gets it a bit more than “right,” however, thanks to being an FPS that plays like you remember rather than as they actually ran.

Strafe is a game soaking in the memory of the 90s, and that includes all the extras surrounding it.  The Strafe website is straight out of Geocities, its ads are pure cheese and the Strafe airbrushed jeans jacket is a thing of glory and wonder.  Even the demo units were using the 90s IBM Model M keyboard and for that extra touch of authenticity, the developer handed out the Steam key for this preview on an honest-to-god 3.5″ floppy (it took almost a week to find a friend with an old USB 3.5″ drive, but at least now I’ve got the bonus AOL Buddy icons too.  My classmates are going to think I’m so cool when they see them!)  Strafe is all-in on its influences, but not to the point where it neglects the horsepower of modern PCs to make an utter gory mess of the level as you blast through it. 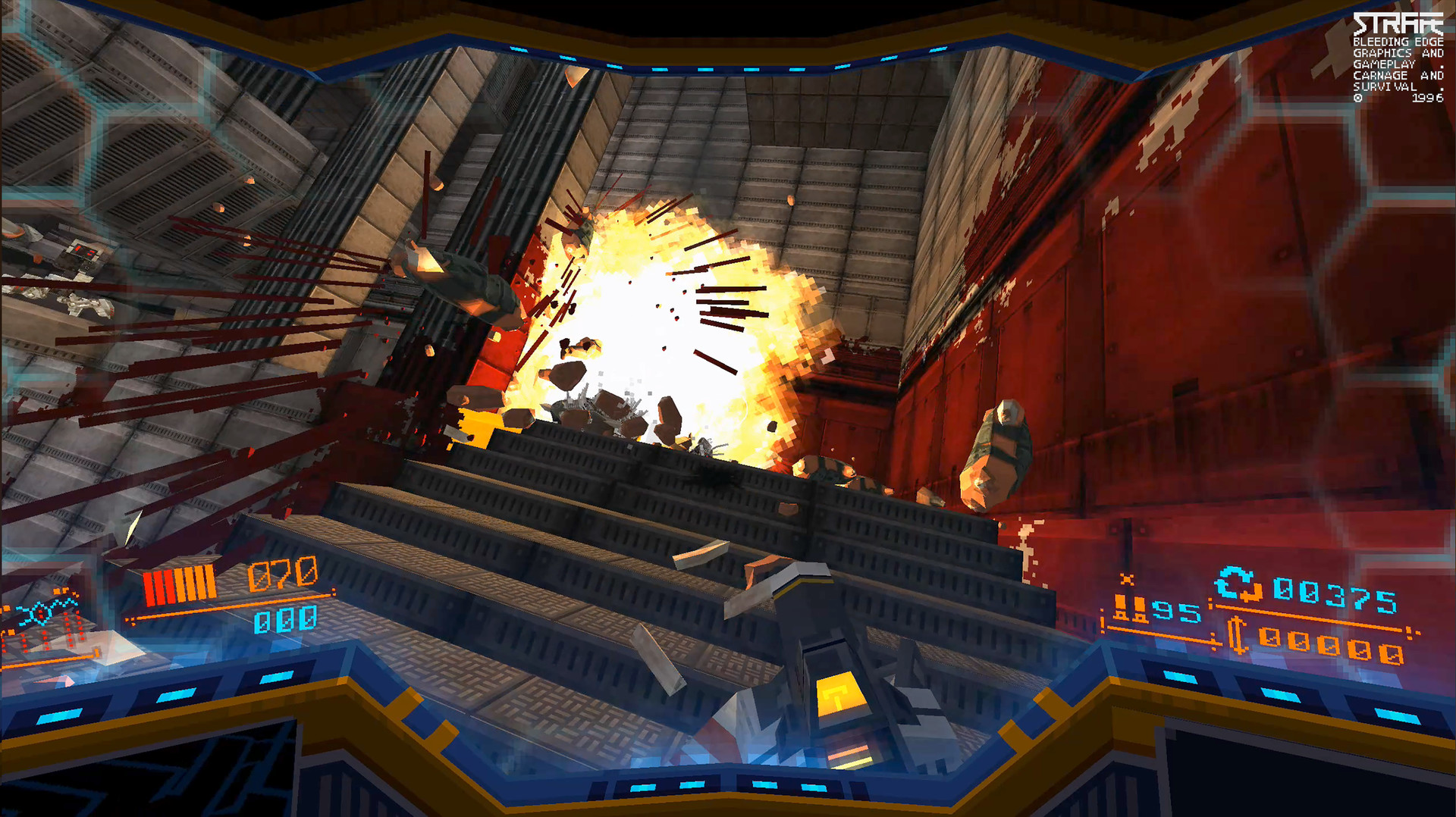 The basic story is you’re a scrapper on the starship Icarus and, after returning from an unsuccessful mission, find it’s been overrun with goons, rogue robots, acid-spewing insects, drop bears, and other deadly space beasts.  It’s a good idea to see the tutorial at least once, if only for the FMV sections, and then it’s off to the Icarus to see how long you can survive the randomly-generated levels before they tear you apart.  The scrapper starts with 100 shield and 100 health, but enemies can whittle that down to nothing in a surprisingly short time.  On the plus side they go down easy, but when they attack in numbers while your back is to an acid pit it’s very easy to lose all the shields and half your health in a single regrettable wave of combat.

The important thing is that even when things go south the alien goons are going to receive more damage than they give, and the level ends up decorated with limbs and torsos and a new blood-red paint job once your guns have had their say.  At game’s start you choose either a shot-, machine- or railgun and get as far as possible while exploiting its strengths.  The alt-fire of each gun shoots a grenade that uses a large percentage of an ammo clip, different for each type of weapon.  The machine gun’s grenade is your standard explosion, the shotgun lets off a burst of bouncing lasers, and the railgun charges up a big blue explosive orb.  Gun upgrade machines are found one per level starting on the second area (and look like arcade machines complete with coin slots) add a random modification to either the shot or the grenade, which can have a major effect on how you approach each encounter.  Bouncing bullets are very handy except friendly fire is always on, and a shotgun that fires grenades is a lot of fun until one explodes in your face.  The marquee above the upgrade machine gives a hint as to what change is coming, and if the gun gets unusable you can always set it back to its starting stats at a handy scrap machine, but half the fun of a good roguelike is learning to use what you find along the way. 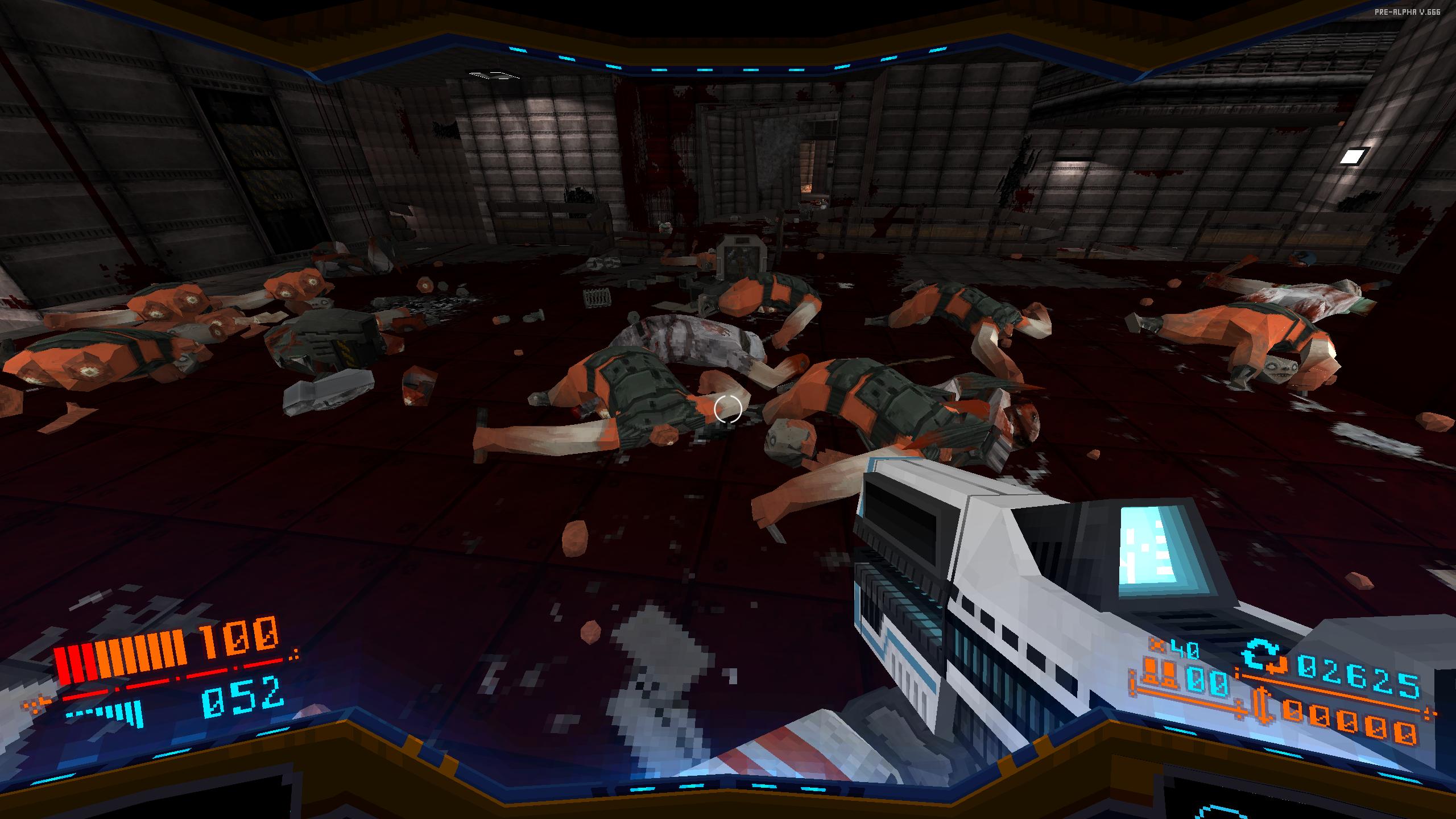 Resting for a moment while proudly surveying over a dozen gibbed corpses turning the floor solid red isn’t normal, but on Strafe it is.

Just to be clear on that point, Strafe is shaping up to be an excellent FPS-roguelike.  The 3D level design does amazing things with its randomization, and while some rooms showing their pre-built origin most areas feel all-new.  The basic room structure only becomes apparent if you search for it, but those rooms can be fairly intricate with walkways, stairs, ladders, and elevator pads all connecting the different vertical sections in each randomly-generated area.  The combat also packs an excellent punch, helped in no small part by the bloody mess each area is left in after you’re done.  Exploding barrels you can pick up and throw are common, albeit capable of backfiring badly if you misjudge the toss, and if you want to play it safe you can always dump a few bullets in a stationary computer as a group of baddies run by, just to watch the resulting explosion send their blood-spewing limbs skittering across the floor.  It sounds horribly violent and technically it is, but the low-poly models and low-res textures take the edge off the brutality, leaving Strafe a gore-soaked fast-action fragfest that’s fun for the whole bloodthirsty family.

To give an idea of how incredibly playable Strafe is, Steam has my game clocked in at 8 hours despite its pre-alpha nature.  Each game starts with clicking past the three instruction menus, hitting “I” to give a brief overview of the HUD just to clear the prompt off the screen, then going into the options to invert the horizontal.  Enemies sometimes get caught running into a wall that they can’t seem to realize isn’t connected to a path, I’ve fallen through the architecture and into the infinite abyss a couple of times, in my last game an enemy jumped off the side of a walkway and kept on falling right through the floor, and one of the shot-changing power-ups for the shotgun can’t get its bullets through a doorway.  It’s a testament to how enjoyable Strafe is that these issues are so easily viewed as either mildly annoying but liveable or funny, depending on whether it impacts my game or just makes the alien goon squad act weird.  Strafe is still many months off with an “early 2017” release date and a lot of development left, but it’s nailed the most important bits already in its journey to become everything you’ve dreamed a 90s FPS could be.