I don’t know how you play The Sims, but my method is largely sociopathic and involves the removal of pool ladders at strategically hilarious moments. Coupled with the stripping of entertainment products, aimless burning of wicker couches, and barricading of bathrooms, kitchens and bedrooms, my game sessions are often a ridiculous romp of babbling incoherent gibberish and living room “accidents.” That changes with The Sims 4, though, and it’s not because I’m a better person. The truth is, I haven’t changed a bit. I still project my insecurities on video game characters because I can, and it’s still a demon I won’t be exorcising without several unaffordable sessions of intense psychotherapy.

You see, The Sims 4 boasts something previous entries in the series failed to produce: emotions. While my band of quirky characters had their share of unique attributes and cutesy mannerisms, they were puddle-deep. The complexity capped at a desire to birth a child or order a pizza; interchangeable “wants” and “needs” that required senseless conquering of humdrum tasks. Ultimately, the results were inches of accomplishment on the happy-o-meter, crawling towards success like a grass-mowing, food-shopping, house-cleaning, friend wooing Galápagos tortoise. The problem is, I never felt very successful. I couldn’t relate to my characters or their stupid desires, and so I didn’t feel bad about abandoning those lifelong dreams chosen meticulously by the engine.

In The Sims 4, emotional responses exist outside of the series’ set of fluffy systems. Characters can become angry at a moments-beat, pee themselves to death during particularly lengthy bouts of laughter and exhibit signs of stress that will quickly become noticeable to surrounding friends and enemies. Sadness, happiness, inspiration and embarrassment all make the list as well, with Sims better expressing themselves, featuring a range of emotions unlike that of Kristen Stewart, i.e., good. There’s real emotional depth, simulated intelligence and probably some better acting, too. 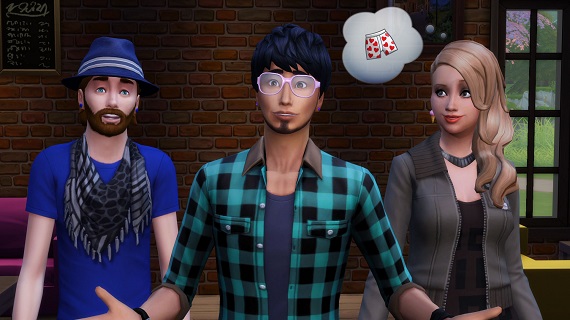 It’s not some beautified concept stripped from a previous title, either. It’s a new system, and one which is only seemingly as simple as playing some form of emotional wheel-of-fortune. The Sims 4 doesn’t strip those pesky challenges and goals from the experience. Instead, it does the unexpected: it actively makes you give a s*** about them. When arguments break out over whose dance moves rocked the party most effectively, or a singled-out Sim teaches herself to play sob-songs on the acoustic guitar following a rough breakup, it’s easier to appreciate, and thus work towards, those ridiculous aspirations. You grow to care about the outcome of your Sims’ personal scenarios, because their little virtual lives are more than a series of repetitive tasks.

In the Sims 2, the last entry in the series I bothered experimenting with, my choices were based chiefly on the reward at the end of the struggle. I didn’t respond to blabbering cries for attention or crippling hunger. The game, both on a surface level and layers deep into its most intricate mechanics, was a point and click adventure in which my only goal was obtaining more money. I narrowly dodged cheating my way to a bigger pool, rose garden and flat screen TV because the climb, or “meat” of the experience, was as empty as my starter home, devoid of fancy furniture, lavish color schemes and, most importantly, meaning.

My Sims didn’t love each other – they were drones, programmed to follow a strict set of guidelines influenced too heavily by my initial personality choices. The substance of the experience was no more than a predetermined task-list cleverly disguised as a series of random occurrences. I wasn’t controlling the lives of these virtual folk, I was a mouse-clicking maid, chef, construction worker, chauffeur and sex-ed teacher. The Sims 4 is breaking that mold, though; crushing the age-old convention of god-simulation games which rank freedom well above fun. I enjoy commanding armies, coordinating social functions and managing businesses, but The Sims isn’t a variation of Sim City or Age of Empires or Lemonade Stand Tycoon – at least, it shouldn’t be. There’s enough freedom at its core, but decisions – big or small – should have consequences. After all, it’s a life simulator, and a life without risk is hardly one worth living.

There are plenty of new and improved features in The Sims 4. Better building mechanics, revamped character customization options, a larger world to explore and more stories to encounter, participate in and craft to your hearts content. There’s a plethora of possibilities, and its world will no doubt play host to an abundance of player creativity. But the best addition isn’t one you’ll necessarily play with, though. It’s not a tangible feature you can tweak or expand with funds. The emotions system, not the aspirations of my Sims or the bank of purchasable decorations, is what will keep me from deserting my housemates long after I’ve exhausted every tool in the arsenal.

Caring about my characters, even a weensy bit, makes the game worth playing long after the goals are checked, the babies are grown and the wedding, divorce, job or zombie infestation has been tackled appropriately. For the first time in years I’m excited about The Sims. I want to create my ideal family, and I want to see them grow, sing, dance, cry, and live life – all while my guiding hands manipulate the world they inhabit. For the first time in years I’m excited to play The Sims, not simply tinker with its mechanics ad boredom. The Sims 4 may be missing toddlers and pools at launch, but it’s equipped with something few titles in the genre can match: characters you can care about; characters that are both yours and the games to enjoy, experiencing every new scenario along with their almighty mouse-clicker above.