There are many good ways to wake up.  The sunlight pouring in the window after a restful night’s sleep, getting boomped by an affectionate pet that would like you to know it loves you and is also hungry or slowly gaining consciousness and energy curled up with a loved one are all great starts to the day.  Waking up on a meathook as three hooded chainsaw-weilding cultists advance, on the other hand, is the exact opposite of that.  It’s not a great place to start and things only go downhill from there.

Dusk: Episode 1 is an old-school FPS that wears its Doom/Quake/Redneck Rampage influences proudly, including the Quake-style art.  Enemies focus specifically on the player, you’ve got a run-speed that’s fast beyond all reasonable measure, ammo is plentiful, and there’s a Duke Nukem 3D-level of interactivity with the background objects.  Why would you flush a skull down the toilet?  No reason other than because you can.  Most of the time, though, you’ll be tearing through non-linear levels searching for secrets while blasting cultists, ambulatory scarecrows, demon-cows, and other American Gothic oddities. 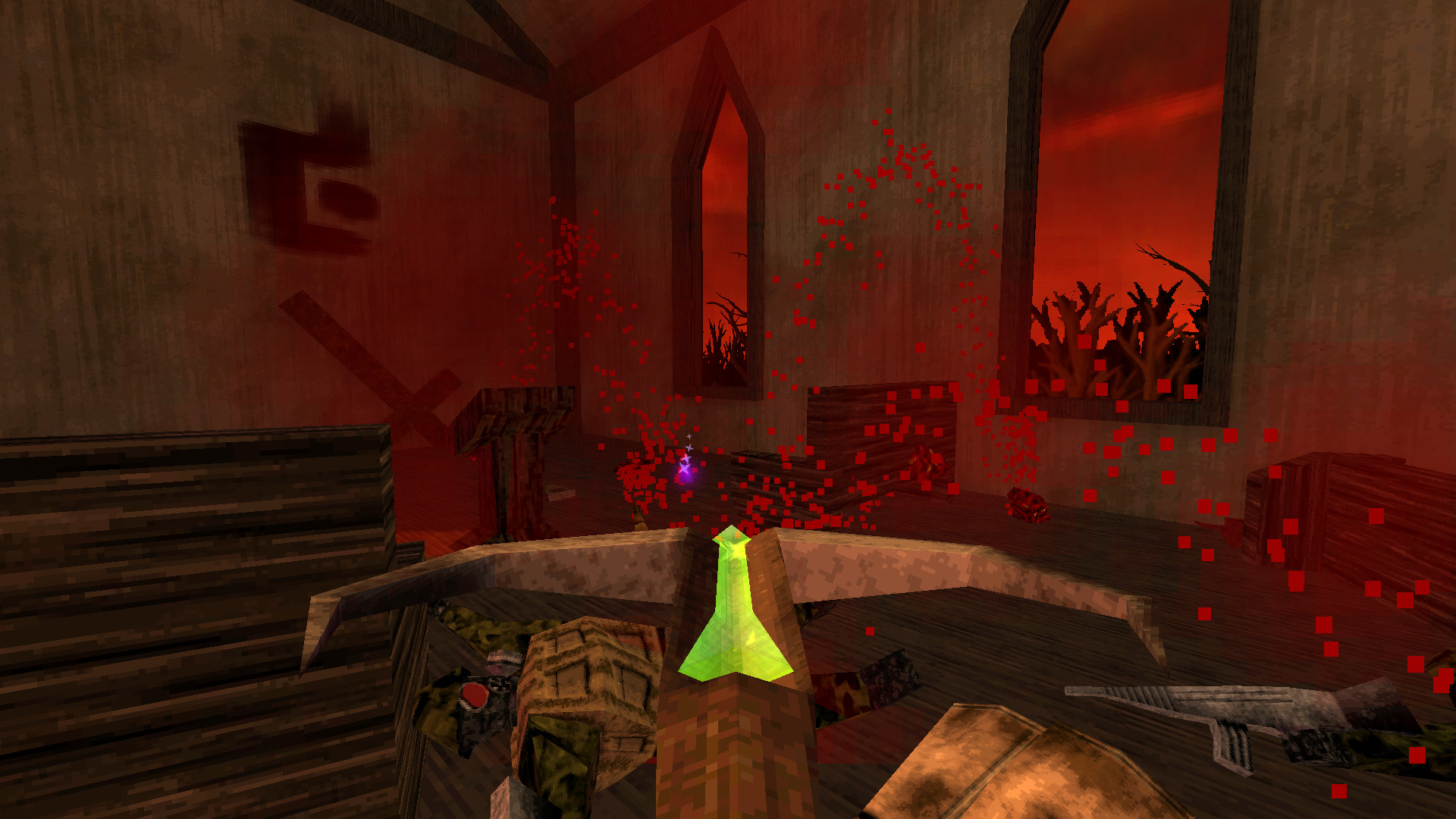 The main character is a faceless, genderless, identity-less individual, with the game’s personality coming from its setting and 90s-throwback design.  Creepy heartland America has plenty of options for unique levels, from swamps and factories to churches, farms, corn mazes, and strange networks of underground passages.  Progression is non-linear, meaning there are lots of interconnecting areas and backtracking, but the player moves so quickly that re-exploring the entire level only takes a minute.  Finding a switch hidden in an alcove in a dark corner that you need to crouch to access may get you an obvious doorway or you might have to hunt for it, because secrets can be anywhere.  There are also destructible walls, no-clip walls you can walk right through, and nearly-invisible doors, but unlike Doom these are usually telegraphed with a slightly misaligned texture, so it’s more a matter of paying attention than sliding along a wall hitting the Action button in the hope of finding something.  Every level has plenty to search for, plus odd places to get to that reward you with goodies but don’t actually count as secrets.  With a little attentiveness and persistence you can be a walking arsenal within the first couple of levels, plus feel extra-smart for finding all the hidden areas.

While the highlight of Dusk is its level design, the action holds a solid second place.  It doesn’t take long to be wielding twin pistols, or twin shotguns for that matter, and these are quickly joined by the standard FPS arsenal of double-barreled shotgun, machine gun, grenade and rocket launchers, etc.  The crossbow shoots a piercing bolt, tearing through multiple enemies if you can both line them up and remember to use it, and the zoom on the hunting rifle makes for nice sniping, but for the most part you’ll shuffle between the two types of shotguns and the machine gun.  Dusk gets a lot of the classic feel right but lightly misses the mark in terms of giving you a reason to mix up your shooting tactics.  The enemies just don’t demand much variation in combat. 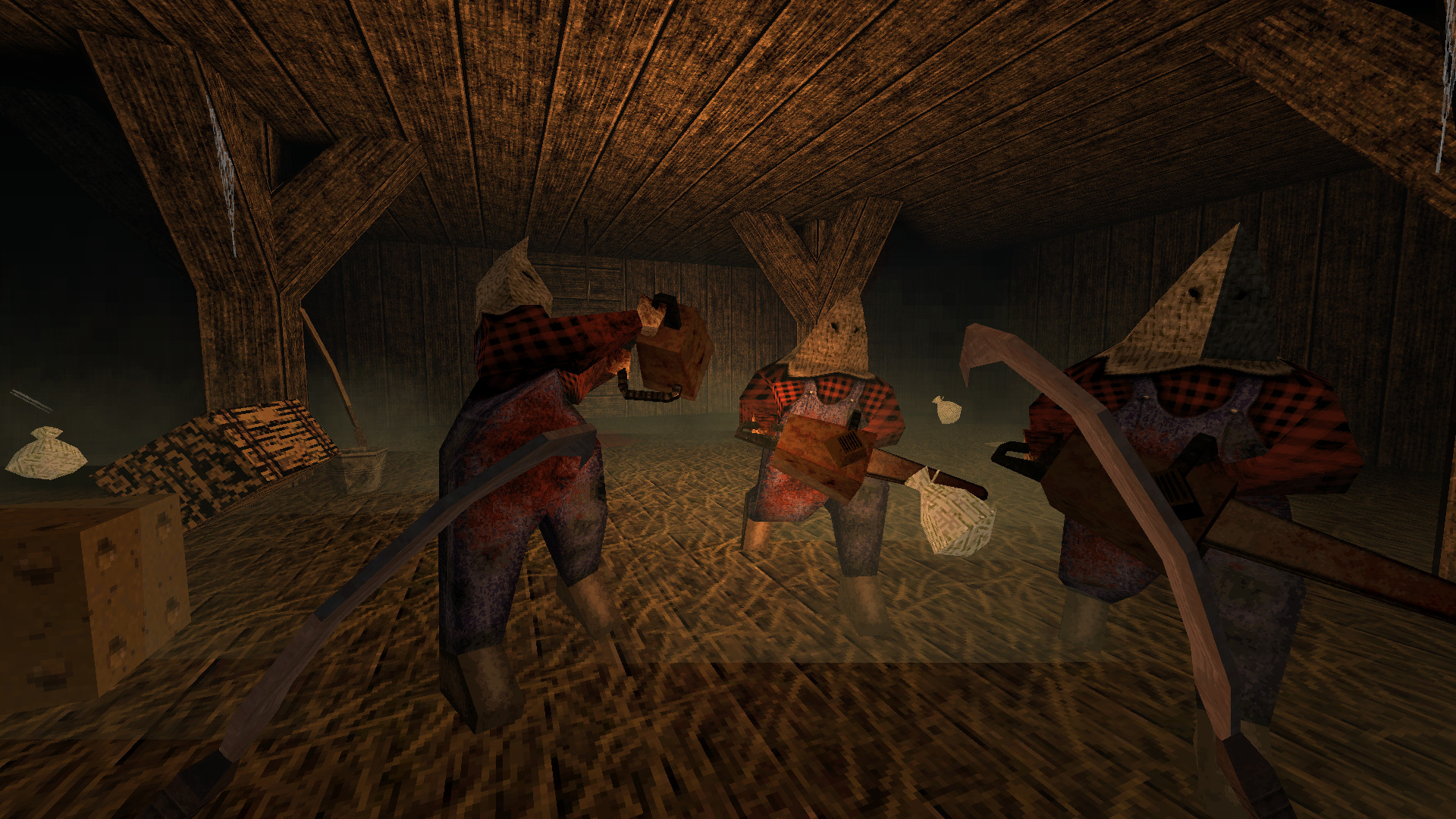 While the designs are unique and memorable, Dusk‘s enemies aren’t heavy on the work ethic.  The chainsaw-cultists will chase you around, and rats stream right at you to nibble on your toes, but the ranged enemies are a little too patient with their attacks.  The hooded cultists, which are basically Doom‘s imps, shoot a familiar-looking fireball every now and then.  The two types of scarecrow, wielding shotguns or a magic bolt, are no more aggressive, but at least their shots travel fast enough to make them likely to hit when they fire.  My initial play-through was on the middle difficulty and I died a total of once, on the last boss of the episode.  Hard difficulty is a bit more of a challenge, of course, but that’s due to receiving more damage than an increase in enemy aggression.

While a better challenge would be nice, the current freakshow is still good fun to shoot through.  The main campaign is fairly short, seeing as it’s only the first third of the game, and the other two episodes will be released one at a time as they get completed.  There’s plenty of replayability in the current setup, though, with four goals to aim for in each level plus an Endless mode that spawns enemies in an arena-style level until you die.  It’s also worth noting that the initial purchase of Episode 1 will be expanded on until it’s the whole game, rather than Dusk being sold a chapter at a time.  Dusk is a pure action shooter with excellent level design set in a twisted rural American heartland, and however the cultists got the player suspended on hooks at the start of the game, they’re going to have to eat a whole lot of ammo if they want to do it again.