It’s been a long time since a — let’s call it a “plastic instrument guitar game” — has graced our presence. Moving from a niche product to taking over the video game world by storm, the genre seemed unstoppable, piling up millions of sales and fans along the way. Unfortunately, however, it turned out to be less of a revolution and more of a fad and the genre faded into the ether as quick as it arouse from it. Five years have gone by since the release of the last Guitar Hero title — Warriors of Rock — and many thought the brand was gone for good. Activision isn’t giving up so easily, however, and is attempting to resurrect the brand with Guitar Hero Live. Instead of a quick cash-in, though, the company has redesigned the game from the ground-up, morphing it into what’s shaping up to be a persistently exciting live experience.

The most notable aspect of Guitar Hero Live is how refreshingly serious it takes itself. Gone are the days of flames bursting out of every conceivable aspect of the Guitar Hero, the cartoony bands in the background and the undeniable “game-y” feel of it all. Instead, Guitar Hero Live is a fresh and modern experience that wants to be something that those in a real band won’t scoff at. This direction is clear right down from its streamlined logo all the way to its plastic guitar. Although its diminutive stature won’t fool anybody, the simplicity of the new controller makes it the best-looking peripheral the series has seen yet. This is accomplished not only through its streamlined design, but through the ejection of the color-coded buttons. These were always the factor that made the game seem more like a toy than a virtual band and developer FreeStyle Games has done a fantastic job designing their way around them. 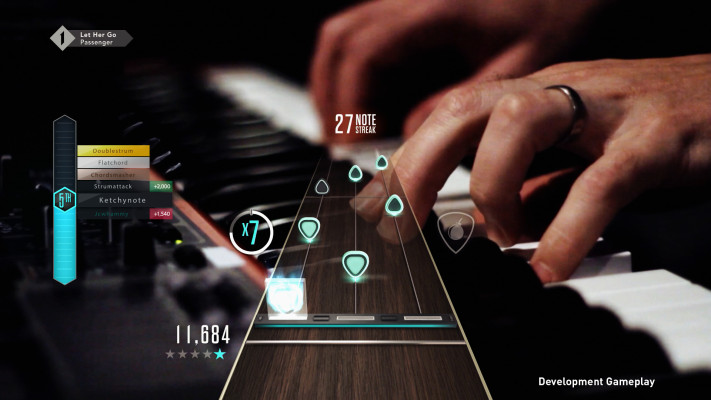 Instead of a a row of five brightly colored buttons that correspond with on-screen prompts, Guitar Hero Live features two rows of three buttons on its controller and just three columns of prompts on screen. This is accomplished by making the top row correspond to the black prompts on screen and the bottom row correspond with the white. While at first glance this makes it look like the game is simplified, the ingenious thing is that’s true only for beginners. Those totally inept at eye-hand coordination can simply keep their fingers on one row and strum away. When it gets into fast songs at high difficulties, however, it’s a total beast to master. By having two rows, it ups the learning curve substantially and forces your brain to memorize what patterns correspond with what finger movements. Once you’re jamming along to a Lamb of God song, you’ll be bending and moving your fingers all over the controller, which feels much closer to the actual experience of playing a guitar.

It’s not just the realism of the base mechanics themselves that have been noticeably improved, though. The ridiculously cheesy backgrounds (seriously, how did we ever cope with those things?) are no more, instead replaced by various live video. The centerpiece of the experience puts players in the shoes of a guitarist by recording first-person FMV video from concerts. Instead of making players feel like they’re in a unpleasant drug-induced psycho clown nightmare as in previous franchise titles, Live makes the player feel like they’re truly up on stage living the life of a rock god. As cool as this is, however, the main attraction is GHTV. 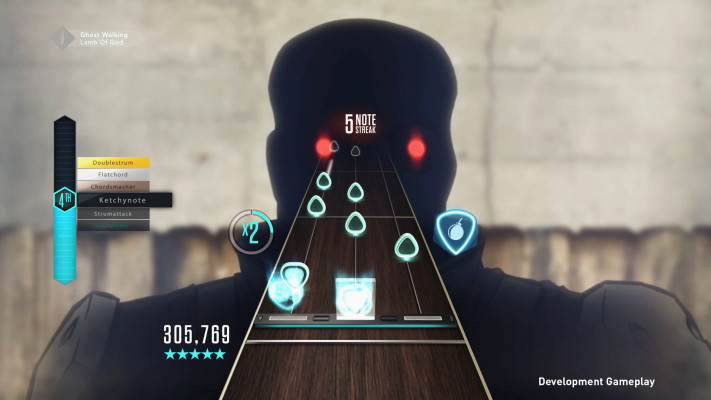 GHTV is a 24-hour playable music video network that allows players to jump in at any time. Players can either choose from every music video available to them or simply let them all roll (as the service expands, likely by genre) and play through each one. What’s cool about this is that it ideally will act as a playable version of MTV that people can simply let roll in the background. Only when a guitar is picked up do the prompts appear, so all other times it will simply look like you’re watching music videos. This is a great for a party atmosphere where the game can simply be on with guitars available to guests, letting them decide if or when they want to play.

Not only will the music videos constantly (as we’re told) be updated, but players can automatically play against their buddies in the same room or around the globe. More still, this system makes it easy to continually expand the tracklist of the game and most importantly, it’s just plain cool to play along to these (mostly) great music videos that feature the song in full. Playing along to the full, nine-minute version of The War On Drugs’ slow-burning Under the Pressure is simply not an experience that was possible in any past rhythm title.

In fact, there’s plenty of atypical bands like The War on Drugs in Live with groups such as The Avett Brothers, Sleigh Bells, TV on the Radio, Haim and many more making appearances. “We really wanted to access and explore a whole new realm of genres,” said FreeStyle’s Pete Bucknall speaking with Hardcore Gamer. “We wanted to have something for everyone and allow people to discover more music. Having the music discovery side of things was a really big focus and to do that we wanted to have a wide range of genres. So a lot of things in there might be songs that looking at previous Guitar Hero games might not have worked so well, but actually connect really well and are fun to play regardless of the genre.” 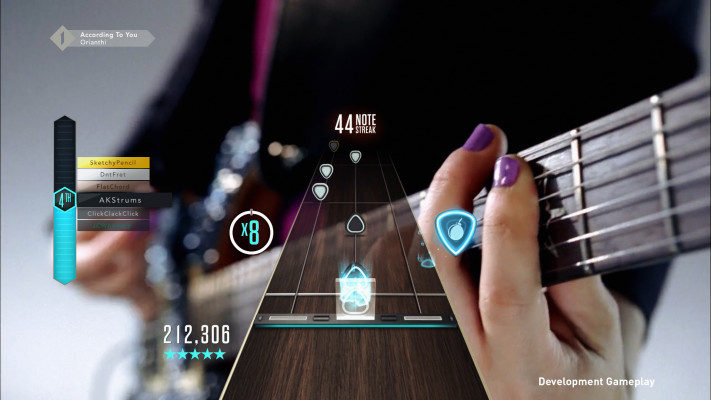 Guitar Hero Live is revolutionizing music video games. Anybody skeptical about that claim is totally right to be, but once you pick up that guitar controller and start digging through everything the game has to offer, it’s difficult to pull away. This is a rhythm gamer and music lovers dream, offering not only a fanatically redesigned gameplay experience, but also a persistent online community. The one thing holding it back right now is the confusion around the addition of online tracks and monetization. If everything goes as planned and songs are constantly added that can be unlocked simply by playing the game (with monetization only for live concert “Premium Shows” and the laziest among us), Guitar Hero Live will be a clear-cut winner. Even still, the sheer fun of the whole thing and the impressive tracklist out of the box makes it easy to buy first and figure out the specifics later.