Kalypso Media and Kite Games unite to bring back the Sudden Strike real-time strategy series. With better visuals, content, new scenarios and legendary commanders, the latest Sudden Strike is meant to be the most authentic and tactical entry in the series yet. Developed as a full-fledged entry in the series, Sudden Strike 4 features three extensive campaigns set in World War II. Of course, this involves playing alongside both the Allies and the Axis, placing the player among arms with the British, Americans, Germans and Soviets. With over a hundred different units in battle, Sudden Strike 4 includes the likes of the German bomber Heinkel He111, the Russian T-34 tank, the British Hawker Typhoon fighter plane and the German Panzerkampfwagen VI Tiger. A major addition to this title is the ability to choose which of nine historical generals to battle alongside. Modern elements like skill points and overall upgrades between missions have also been added to enhance the original game’s concept.

Each general – three per faction – allows for unique approaches and abilities in any given mission. This is characterized in each general’s passive abilities and stat buffs. Likewise, character-based progress is attributed to the given general used in a given mission. These generals can include the likes of George Patton or Bernard Montgomery. For example, Heinz Guderian can provide improvements to tank repairs, fuel, and defense, making him a good choice for a tight tank-on-tank mission like the Battle of Stalingrad (despite his historical defeat there). Different factions will have different history-friendly objectives in the different missions based on their times and places. Some subtle touches have also been added like allowing a tank pilot to peek out and get a clearer view past the fog of war. Special care was given to match historical accuracy as well as to allow for certain playable generals and characters… meaning some delicacy went into selecting some of the lesser war criminals from Nazi history to get a game like this made under modern German law. That said, despite working with different generals in the campaign, players actually play as a sort of unnamed tactician whose exploits are chronicled automatically in his diary – based on some specific maneuvers the player makes in a mission. Due to a commitment to historical accuracy, the missions based on real battles don’t end any other way from how they actually did. As such, mission success is scored with points. Players will want to get the most points they can, based on objective completion, to gain the most skill points for use in upgrades after a mission. 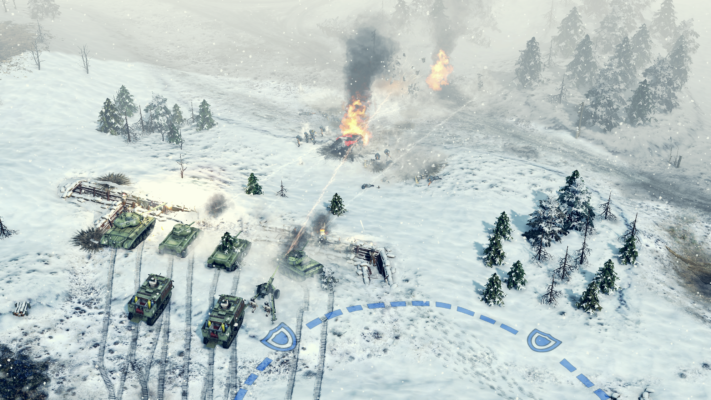 The single player campaigns contain over twenty single player scenarios. The mission variety features major battles in Europe during WWII from Poland in 1939 to Berlin in 1945. The missions can get chaotic, which only worsens the playing field when units and vehicles get maimed but not destroyed. For example, after a skirmish, the repair vehicle could be disabled but not entirely out of the fight. Another person can go into the vehicle and man it as long as it’s in one piece and repairable. The same applies to enemy vehicles. Kill the troops manning an enemy tank and that tank can actually be commandeered at the risk of it blowing up later, under use. Then there are the environmental hazards like weather, such as rain and differing terrain, which can debuff or even immobilize tanks and vehicles. Meanwhile, structures like buildings can be taken as well for some leverage and verticality. It all comes with risk, as infantry placed in a structure that gets demolished are also, in turn, demolished. Every maneuver, and its consequence, revolves around playing smart every step of the way.

Since the campaign scenarios have some historical influence, and the game wants the player to use their brain as much as possible, there isn’t a base-building mechanic at all. While there are limited resupply trucks and reinforcements, the main challenge of the game is to think as tactically as possible. The reason is the game looks for this in its tactical reward system. The way this works is if the player performs, for example, an encirclement tactic, an ambush, or targets an enemy tank’s weak spots, the game will know. Players can maneuver their infantry around the action to overtake an enemy gun encampment. The game then recognizes this and awards the play. A well-used tactic earns rewards like badges and bonus points to add onto the mission’s final score. So instead of laying down the hurt for bad play, good play is amply and immediately rewarded. The idea is to have a real-time reward system that leads the player to think better and subsequently play better. To top it off, max scores on a mission will unlock up to two challenges for the same mission. Each of the three different campaigns, as well as their accompanying generals, are unlocked from the get-go. 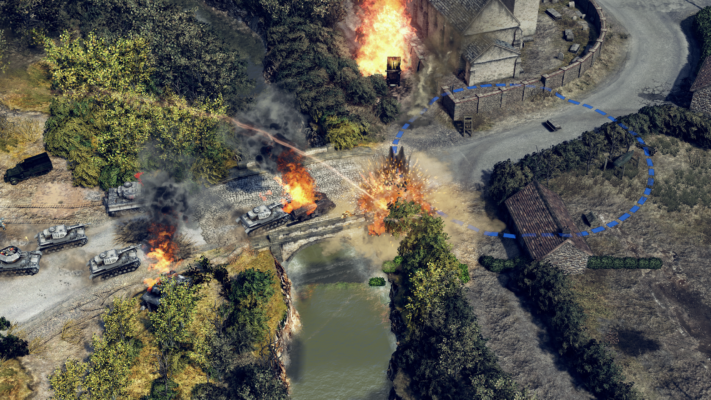 Sudden Strike 4 also includes a multiplayer mode primarily of 4v4 matches of full competitive or cooperative matches and a Skirmish challenge mode. A feature exclusive to multiplayer modes is the ability to “hold” a building, station, or airfield, allowing for reinforcements. The game is planned to feature English, Spanish, French, Italian, German, Russian and Polish localization. This allows the player to choose which language they would like the in-game characters to speak in — be it their native tongues or the player’s preferred language. The game is built on Unity 3D, with a targeted stable 30 FPS performance on PlayStation 4 and no framerate cap on PC. Steam Workshop integration is already a planned feature to support modding. Despite being on both PC and PlayStation 4, no cross platform play is planned.

Kalypso intend to push forward with reviving old PC franchises and Sudden Strike 4 is looking like a quality product of this ongoing endeavor. Sudden Strike 4 is headed to PC, Mac, Linux and PlayStation 4 sometime in the second quarter, next year.