The Hot Wheels license has been one that was tailor-made for gaming and yet has had few full-on games over its lifetime. It has, however, been widely-revered for side content over the years with things like the Hot Wheels content in Forza Horizon 3 and most recently, Beach Buggy Racing 2 enabling players to enjoy Hot Wheels-infused thrills in game form. Now, Milestone is giving the Hot Wheels franchise its own game and aims to deliver an arcade-infused thrill ride that can please both gamers and fans of the long-running die-cast cars. Milehouse’s history is racing-centric, but none of their library is really arcade-esque, making this a departure for them and something that initially concerned me.

With the license behind it, it would be easy to just crank out a game with an existing engine and kind of make it feel somewhat arcade-like on the surface and be done with it. The usage of Hot Wheels designs takes care of normal vehicle licensing, which another blessing for the game and in theory, one could just use this as a base and release endless DLC cars as well to keep the in-game roster current or just feature more historic vehicles. Milestone’s done a remarkable job even in the early build we were able to play at making the game feel like something that would fit right at home in arcades alongside classics of the ’90s, but with a slick, modern coat of paint. 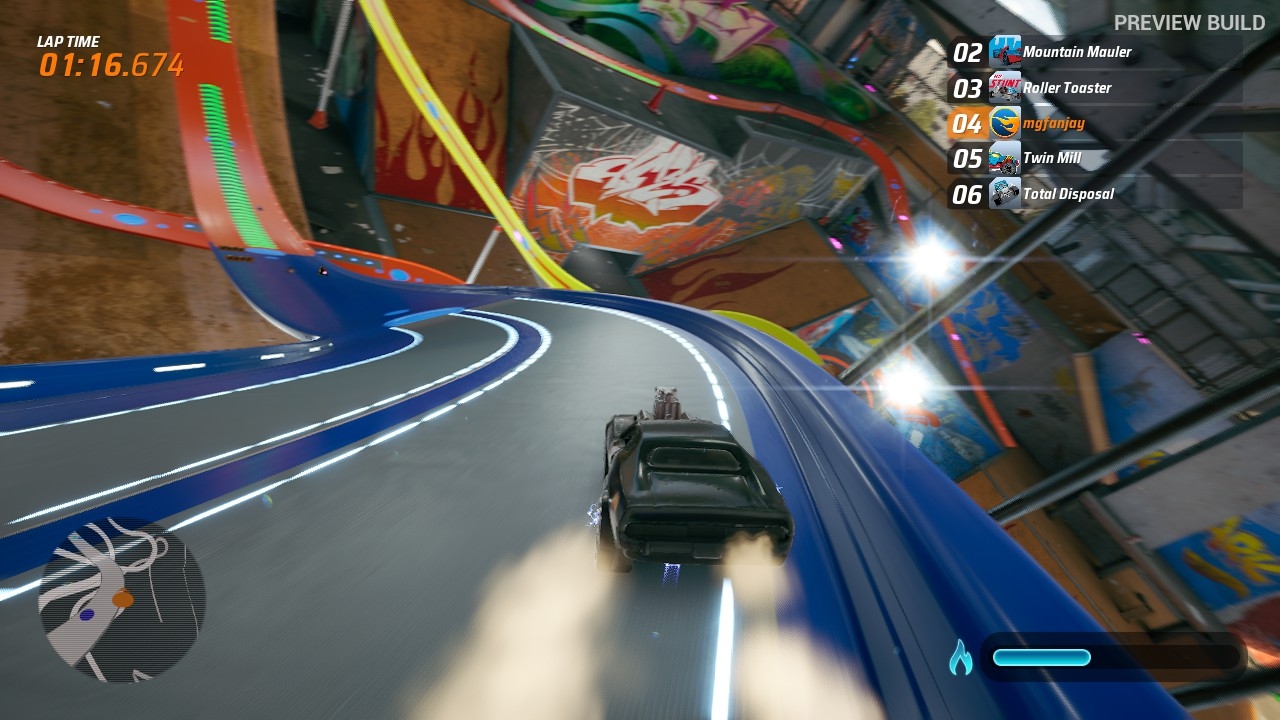 The preview build we had access to enabled us to enjoy over two dozen cars across a healthy selection of nine tracks and while the final game will have more content there and in-depth options, including a track editor, what’s offered up here is already impressive thanks to the core racing action being so enjoyable. There seems to be a tier system of sorts with the car selection, while the tracks offer up a mix of danger with jumps and obstacles. The variety of cars varies from the somewhat normal, like a sports car, to the completely insane, like a burger-adorned vehicle or a generic hot dog racer. The stat selection on them is varied as well and when you get into the rare and legendary cars, you start getting into vehicles that can dart around the screen but do require finesse to control, but not an annoying amount. This was a pleasant surprise since a lot of higher-end cars in games can be tough to control.

With Hot Wheels Unleashed, all the player has to do is be careful with what they’re doing – especially on more turn and jump-filled tracks. If you play sloppily on those kinds of tracks, you’ll be sent off-course and while a long press of the Y button can reset you, it might reset you back to the problem area and thus result in a loss where it’s just faster to restart than try again from that point. The jumps in particular are tough since it’s not always easy to move in mid-air. It can be easier if your car has a feathered boost, but if it’s a one and done boost that’s continuous, you’re probably out of luck. 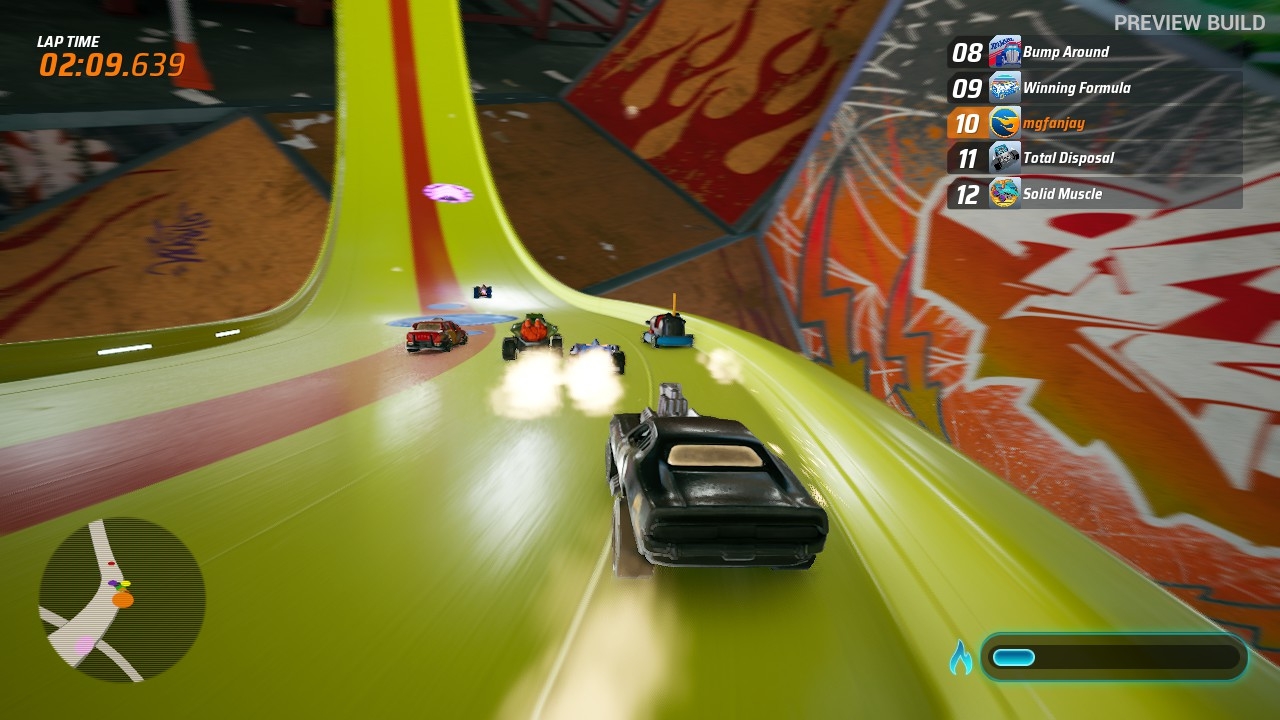 The variety of turbo boosting systems was a pleasant surprise since most arcade racers will limit you in either number or in the case of F-Zero, tie it to a system where you can boost at the cost of HP. It’s nice to have some versatility and use trial and error to figure out which kind works best on which tracks. Courses with long straightaways are fine for both, but areas with a lot of corners should only have boosts used with a feathered touch to help ensure that you don’t go flying off-track on jumps and tough turns. Turning is largely a breeze, but it’s still something you have to be careful with. Milestone has worked some magic with the drift mechanic here because it honestly feels better than even the drifting used in Hotshot Racing and with that being a Sumo Digital production and their Outrun 2 work resulting in the best drifting I’ve ever experienced, it’s high praise to have this come close to that game in this regard.

What’s been shown off in the preview build in terms of courses is nice, but there aren’t many pieces of track types used, resulting in a feeling of sameness even though the environments themselves can be varied. The neon-lit attic, for example, looks a lot different than the college dorm, but that doesn’t feel all that different from the everyday bedroom area. The actual makeup of the courses does feel different with more hazards littering some courses, and the so-called obstacle courses actually do have things that can impede you — adding to the arcade vibe of things as that’s something right out of Hydro Thunder. 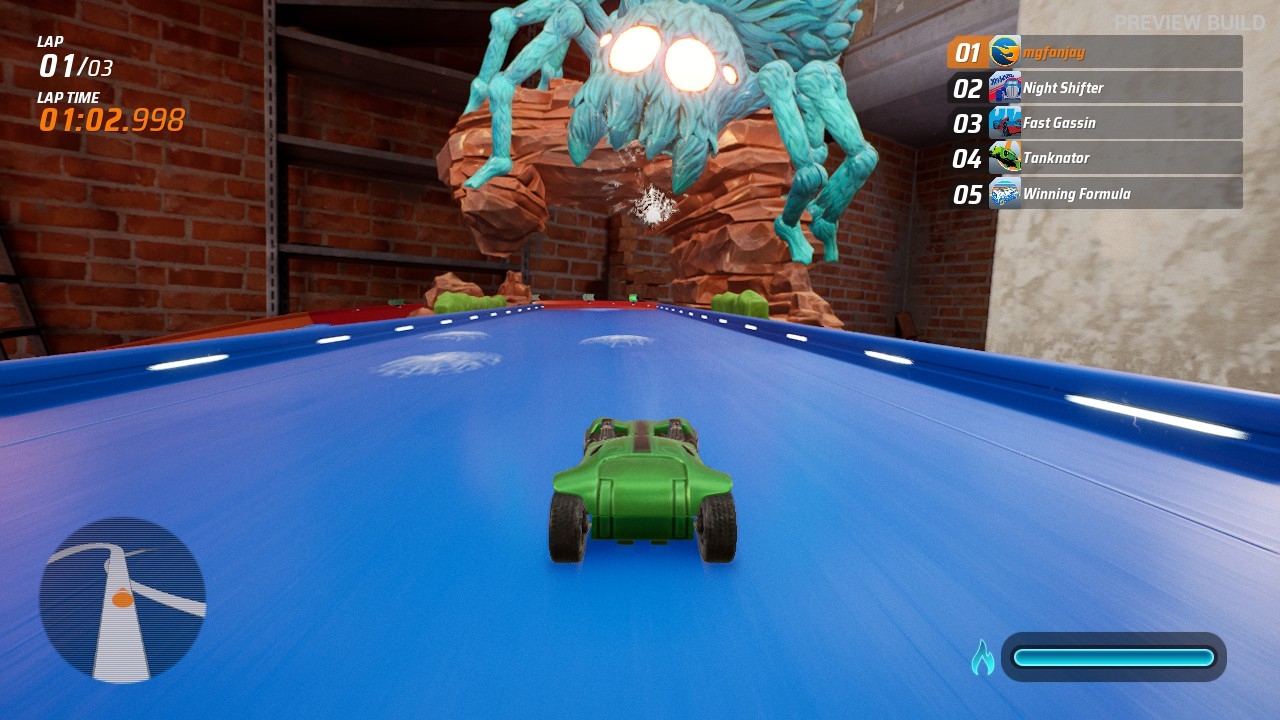 Hot Wheels Unleashed shows a lot of promise visually, even if the preview build was capped in terms of resolution and framerate. The vehicles themselves look fantastic with gorgeous flake paint designs that pop off the screen and a lot of depth showcasing the details as well. This could be its own virtual Hot Wheels showroom, and hopefully that kind of feature is put into the game at some point to just stare in amazement at the models themselves. The reflection of the tracks themselves is realistic and the game truly does work as a fantasy come true for anyone who ever wanted completely insane Hot Wheels tracks in their own home growing up.

Hot Wheels Unleashed is set for a fall release on the Switch, PS4, Xbox One and PC and looks promising even in the early going. The racing action is on-point, and even without a full suite of content to enjoy right now, it’s a top-shelf racing game and one that has a lot of replay value to it in pure race form due to its best-in-class drifting and exciting racing. The track environments are varied even if the track elements themselves aren’t, and a victory feels like a genuine accomplishment since the AI does put up a solid fight at all times. We’ll be keeping a close eye on the game over the coming months, but arcade racing fans shouldn’t sleep on Hot Wheels Unleashed — it’s primed to be one of the year’s best racers.