All things considered, the adventurous life is a terrible idea.  It’s exhausting both physically and mentally and the body count is a bit much.  Great heroism and sacrifice is great entertainment for the gods, but it’s much better to sit at home and enjoy life rather than be the ancient-civilization version of Deity TV.  Sometimes, though, there’s not a lot of choice in the matter, because even the gods can be taken down when their past breaks free.  The titan Typhon has escaped from his prison and torn through the Greek pantheon, binding most of the gods except a handful who are either too small to be of much concern or too powerful to be immediately overwhelmed.  Even Zeus has been forced into desperate action, visiting the chained titan Prometheus for help.  Rather than lend a direct hand Prometheus instead bargains for his freedom, telling the story of a lone human who can rise from an inexperienced soldier into the hero the gods require.  Fenyx is about to embark on a massive adventure and the best she can hope for is that it won’t turn into a Greek tragedy.  Which seems highly unlikely thanks to snappy writing and an upbeat tone.

Immortals: Fenyx Rising is a new open-world action/adventure romp from Ubisoft, which places its teen-rated story in the decidedly non-teen-rated world of Greek mythology.  A relatively brief story intro segues straight into character creation and after that you’re set free to tackle the growing menace of Typhon any way you see fit.  Which for the small starting area is actually focused, as the game gets you up to speed from being an unarmed human to having a nice selection of weapons and abilities to call on.  Sword, axe and armor are soon joined by a set of pop-out wings, broken at first but soon repaired so you can glide through the air for as long as the stamina bar lasts.  Fenyx’s adventure quickly goes from human-scale to near-mythic, with a large world covered in secrets waiting for a hero to discover. 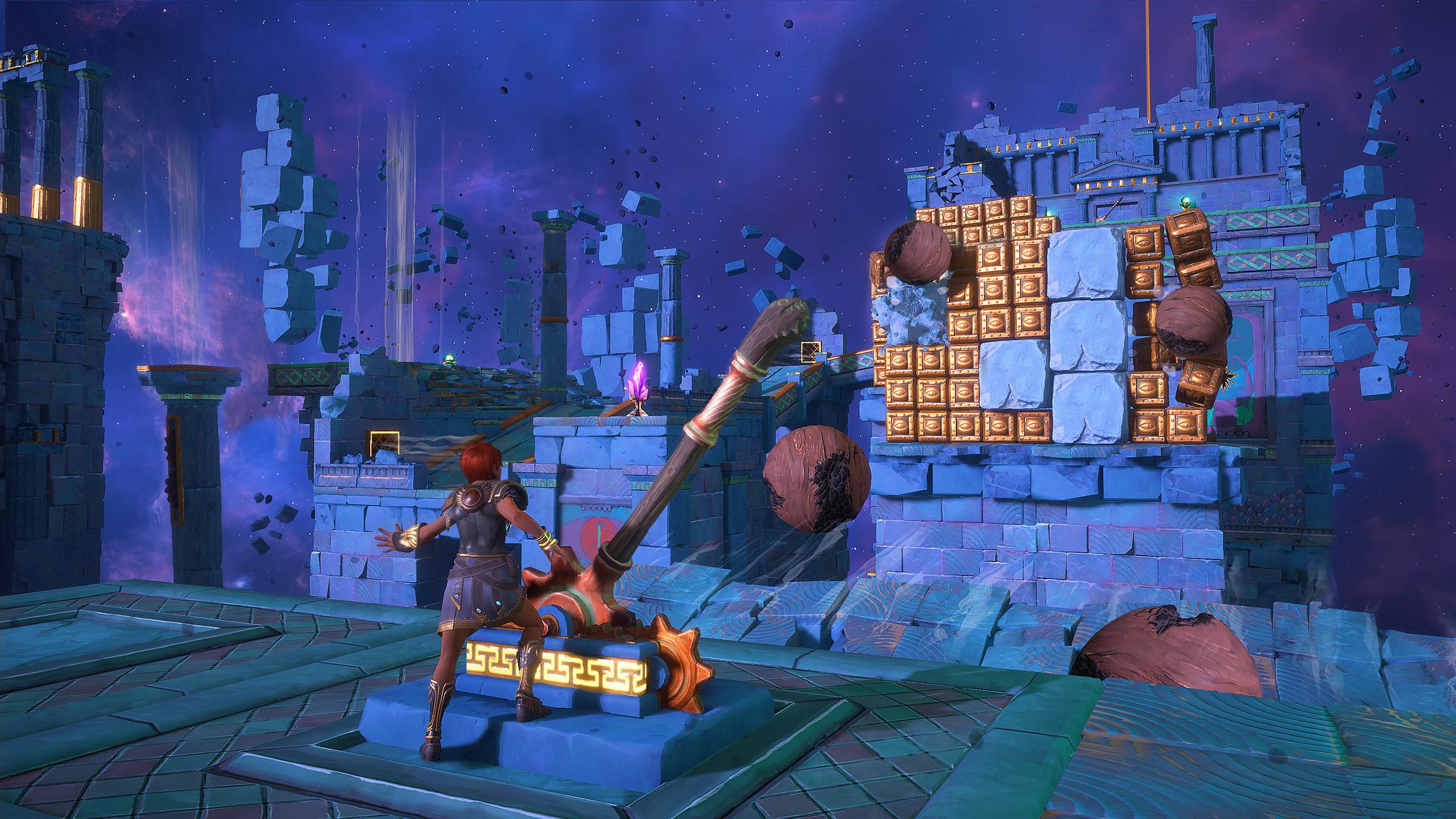 The original reveal for Immortals: Fenyx Rising was back in the first half of September and I got a good four hours of play-time with a build that gave a preset selection of skills and then was plopped in the middle of the world.  This second reveal was structured differently, showcasing the start of the game and giving a sense of story and progression, and it was also a nice four-hour chunk of time.  What got me with both demos was how quickly the appointment went by, with the hours melting away practically before I noticed they were gone.  A good open-world adventure is effective at making one task lead to the other in such a way that it’s far too easy to accidentally see the sun rise, and Fenyx Rising‘s combination of exploration, combat, sightseeing and puzzles promises to easily destroy far too many hours.

Wandering to a point of interest may reveal a small shrine guarded by a variety of soldiers backed up by a gorgon, and after dispatching them the shrine’s puzzle is sitting there waiting to give up its rewards.  Meanwhile the world is littered with resources both common and rare, all of which can be spent back at the Hall of the Gods.  It can feel like rather a lot if listed out, but if you like beating on monsters and solving puzzles it won’t take too long to be able to upgrade weapons and pick up a nice selection of skills and godly powers.

Between the two appointments I’ve put in eight hours on Immortals: Fenyx Rising and both times I’ve come away wanting to play more.  It’s not that the game is a revolutionary take on the open-world adventure but rather that it’s just enjoyable to play.  The dodge, parry, and variety of ground and air strikes keeps combat flowing nicely, and the reward for a good fight is usually a new puzzle.  The world itself is colorful and pretty, with a videogame-y design to its landscapes to provide plenty of nooks and crannies to peek into.  And behind it all is Typhon, immensely powerful and with a number of lesser bosses at his command who aren’t shy at all about tearing through the unprepared.  Immortals: Fenyx Rising is an immensely playable game in a lovely, detailed world, and while it may not be necessary to fight through every square inch it’s shaping up to be an irresistible challenge.