No one really knows what awaits us in death. There are theories on reincarnation and final destination for one’s spirit to spend eternity, along with many artistic depictions of such locations. In Death‘s depiction of the after life is a thing of beauty, resembling Medieval cathedrals floating high above the clouds, defying all laws of physics. In Death takes place in the after life after the kingdom of Heaven is abandoned and the player has to fight their way through hooded monks, knights and zombies to restore some balance to things in the hereafter, armed only with a bow and arrow and shield.

While this may be the laziest cliche to use as a reference point in video game journalism, the influence that Dark Souls had on In Death is undeniable. This comparison is made based on the visual and sound design. The vast cathedral the player explores would not look out of place in the world of Dark Souls, nor would the church music. Plus you will die. A lot. While there are many mysteries about the after life, according to In Death life is like a video game because you can die many times, over and over again. Looking past the surface level similarities and high difficulty, In Death has a very unique identity as a game.

In Death is a roguelite virtual reality first person archery shooter. There are some customizable options for comfort that can be tweaked, such as changing gameplay settings for firing the bow right handed or left handed, along with letting the sensors know if the player is going to be sitting or standing. In Death is designed to have the player move through teleportation, but there is an experimental setting that allows movement through the use of gamepad thumbsticks. There is a warning about motion sickness with this setting, so that is something to take into consideration if you are motion sickness prone. Otherwise this setting is recommended, just because having the ability to freely move in addition to teleporting just makes for a better gaming experience. 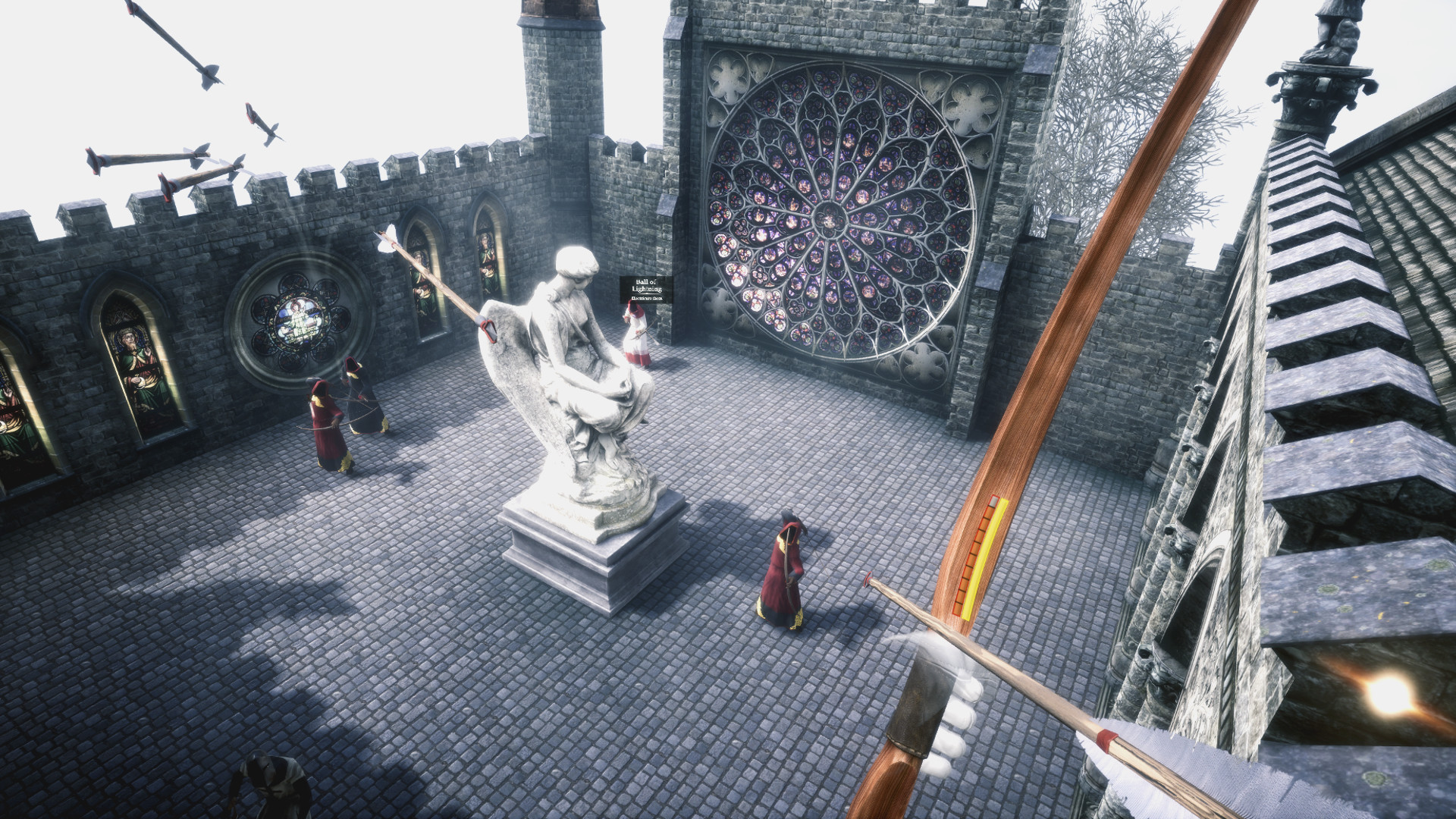 There’s is a brief tutorial at the beginning which is highly recommended to go through. The controls are actually among In Death’s strong points, and for the most part feel intuitive but just to get the basics down spending a few minutes in here is a good idea. The player moves and fights by using the bow. The mechanics are pretty similar for both except what button the player presses with the hand drawing the bowstring determines if they will be firing an attack or teleport arrow. Using the A or B button will use a teleport arrow, which works exactly as it sounds, fire the teleport arrow and the player instantly goes where it lands. Drawing the bow with the trigger will ready an attack arrow. The tutorial also teaches the player some other nifty things, like that their health bar is located on the bow and how to raise their palm for the familiar to tell them how much gold they have.

Combat in In Death is simply a joy. Using the Oculus Touch controllers, one hand holds and moves the bow to adjust trajectory while the other pulls the bowstring to fire an arrow. Basically just move your glowing white disembodied hand over the string, grab it by pressing the appropriate button and pull back. How the bow is held and how far back the string is pulled effect the arrow’s flight path and distance, making it actually feel like you’re battling against these enemies without the actual threat of dying for real. 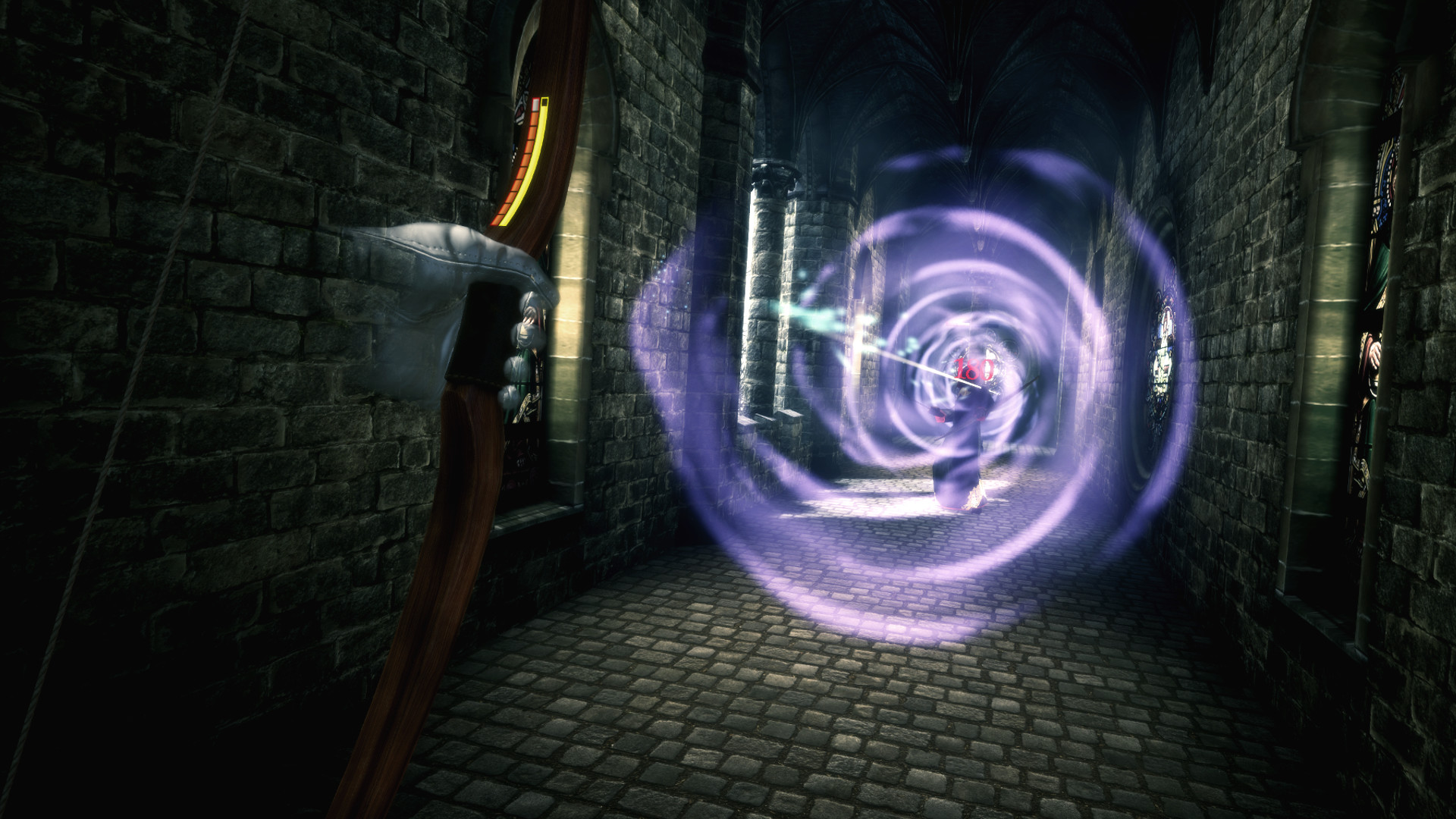 Combat can get more interesting with special arrows, such as Wildfire arrows that burn enemies or Winter’s Bite that freezes them solid in place. Being the dork I am, I tried shooting a frozen enemy with a regular and a flaming arrow saying hasta la vista baby. Much to my dismay the frozen enemies didn’t explode into a million little pieces. Seeing archers in games with shields isn’t the most common sight, but the shield is a very useful piece of equipment. Not only does it block the archer monks’ arrows but it also puts a quick end to when a knight or zombie tries giving you a flying tackle. It can also be used as a melee weapon to stun enemies that start to crowd you, giving an opportunity to put an arrow through their head.

The world of In Death is one of the best looking VR worlds I have had the pleasure to explore. The cathedral’s stone walls and stained glass over the desolate space of the purgatory would fit into the gothic atmosphere of any Castlevania or Dark Souls game, and the heavenly music that accompanies it help create the perfect atmosphere for the game. The controls for raising one’s shield or targeting the bow make for extremely satisfying combat. It’s one to feel good about pulling off a tricky head shot by using a thumbstick and hitting right trigger, it’s something else completely when you’re actually making the motions that one does when firing a real bow. Having the thumbstick enabled controls does help a lot with the immersion of exploring the environments, but as In Death was designed for the teleport system there will be places the gamepad won’t take you. 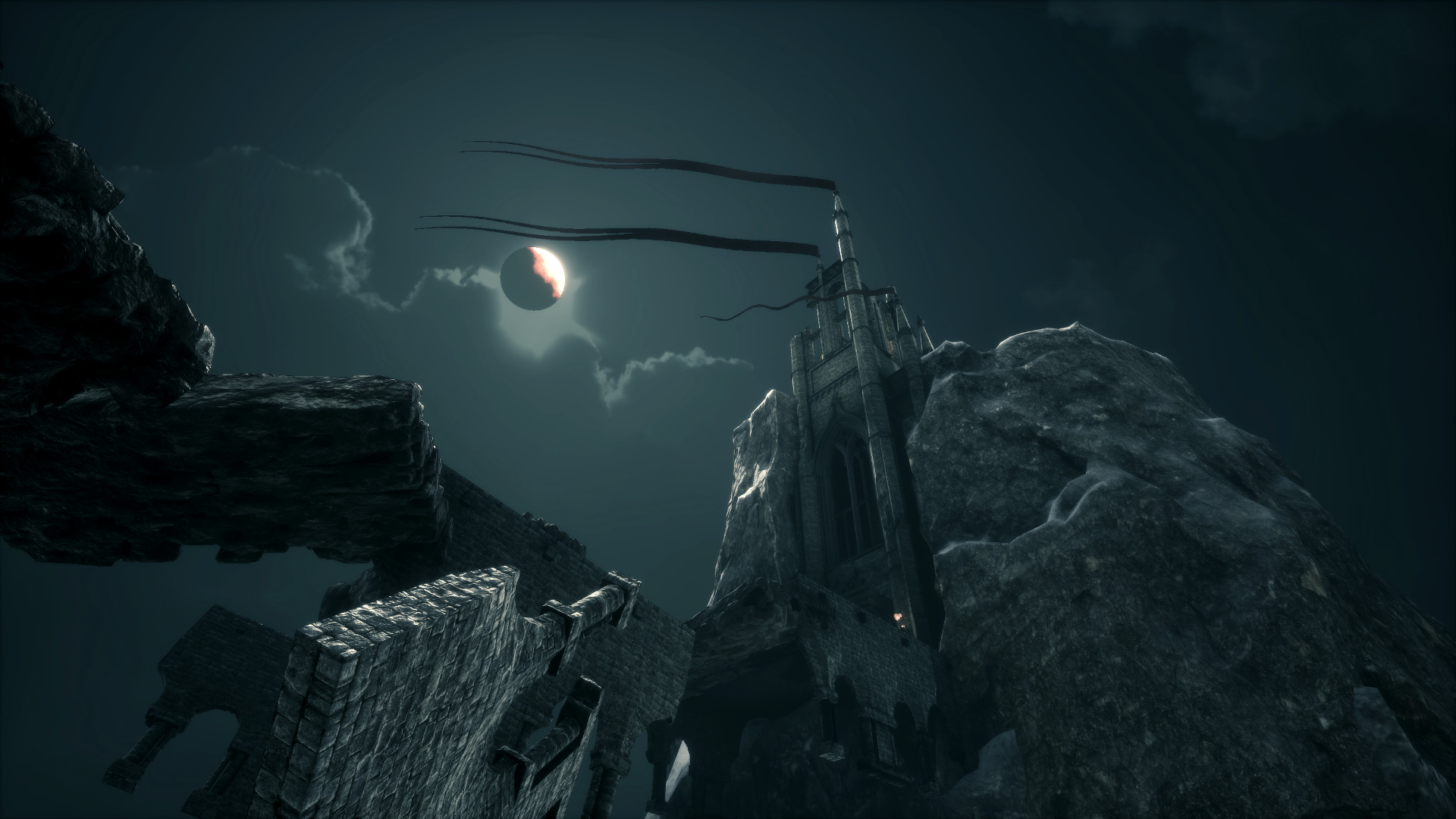 In Death is procedurally generated, which does help keep things from getting too repetitive after numerous deaths and starting over. That being said, it’s quite repetitive in its very nature of wandering about shooting various hostile individuals while wandering similar looking corridors in the afterlife. Something that could help this which may be included when it leaves Early Access would be greater emphasis on the story and narration, along with more enemy and environmental variation. As it stands now, it’s an impressive VR experience. There is no target date at this time for when it leaves Early Access outside of hopefully in 2018. Anyone who purchases the game now to check it out will naturally receive all future updates for free. This is one of the more enjoyable VR titles even in its early stages and worth keeping an eye on for the final version.