When you write a lot of reviews and previews, you become familiar with certain instructions or tips given alongside them. Typically, it’s just general advice recommending a few things to try, places to go or ways to get the most enjoyment out of things. Rarely, however, do you come across a preview copy or a demo of a game where the folks behind it tell you that you should actually try losing when it comes to the first boss battle. Counterintuitive at first, to say the least. But then again, what we’re talking about here is Inscryption, the latest game from Daniel Mullins, the creator of such games as Pony Island and The Hex. And given how bizarre and even meta those games could get, suddenly losing on purpose makes more sense.

Let’s back up a bit, though. Inscryption is mainly a card game built around deckbuilding, played in a creepy old cabin and hosted by a mysterious figure shrouded in darkness, save for their searing, glowing eyes. The game seems simple at first: you have a two by four set of spaces for cards (with one extra row on your opponent’s side in order to see their upcoming moves), each of which depicts a different kind of forest creature with varying levels of power, health and sigils that grant certain skills if possible. If they’re in front of an empty space, they can attack your opponent directly. Otherwise, they attack whatever card is in front of them. Seems simple enough at first. 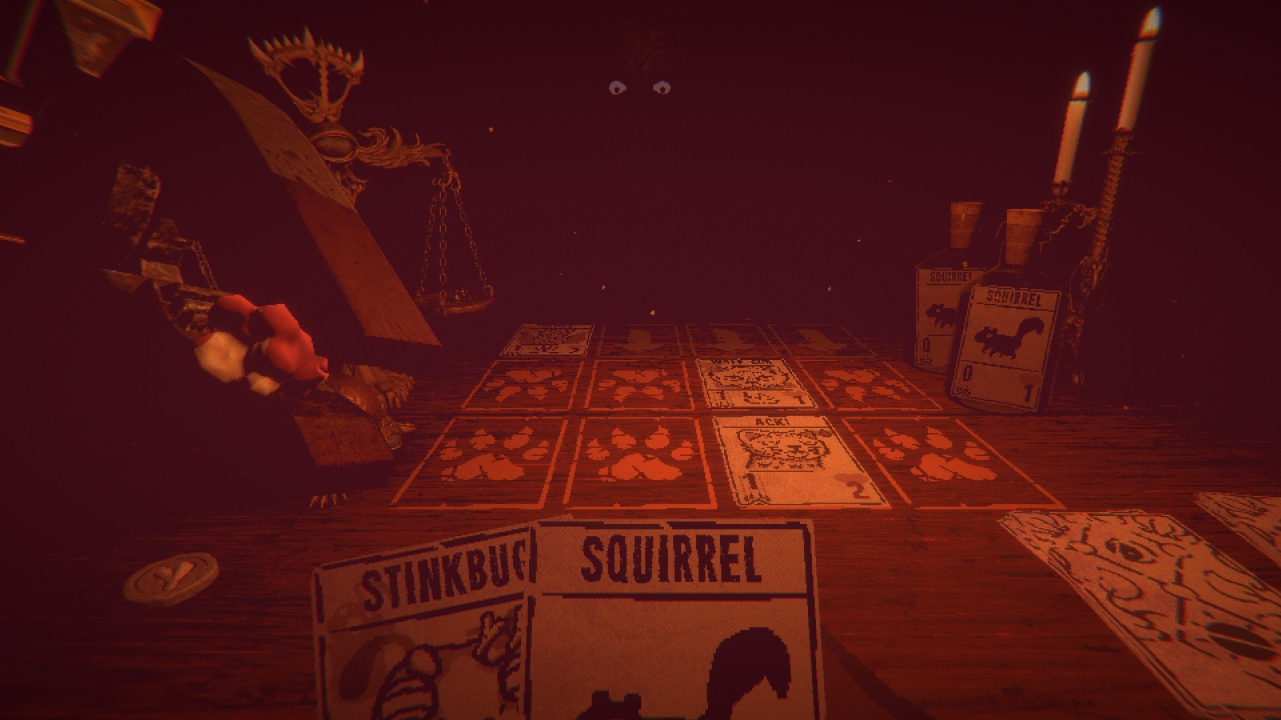 Of course, things change once the stoat card you have your deck begins talking to you and offering advice. And at the part where you realize that you win by knocking out your opponent’s gold teeth in order to literally tip the scales in your favor. And the numerous blood sacrifices, not to mention your host donning a creepy wooden prospector mask in order to play the role of the boss. Yes, it’s that kind of game. The type of game where one of the unlockable items that you can find in the map between battles is a pair of pliers that lets you rip out a tooth in order to give you an advantage.

Thankfully, pliers weren’t needed to take out the prospector boss that was present, because as the stoat told us, they were easy. But what exactly happens when you lose? Well, for one, our gracious host now asks for a memento, and thus offers to create a death card featuring a photograph of you, one utilizing stats chosen from other random creatures in your deck, allowing you to put yourself into the game during your next run. And then a new mechanic is introduced: Bones. Up until this point, the only other way to bring a creature into play was a blood sacrifice, losing one or two of your current creatures in order to bring in something powerful, drawing either a new card or a sacrificial squirrel each turn and making up a good amount of the strategy. 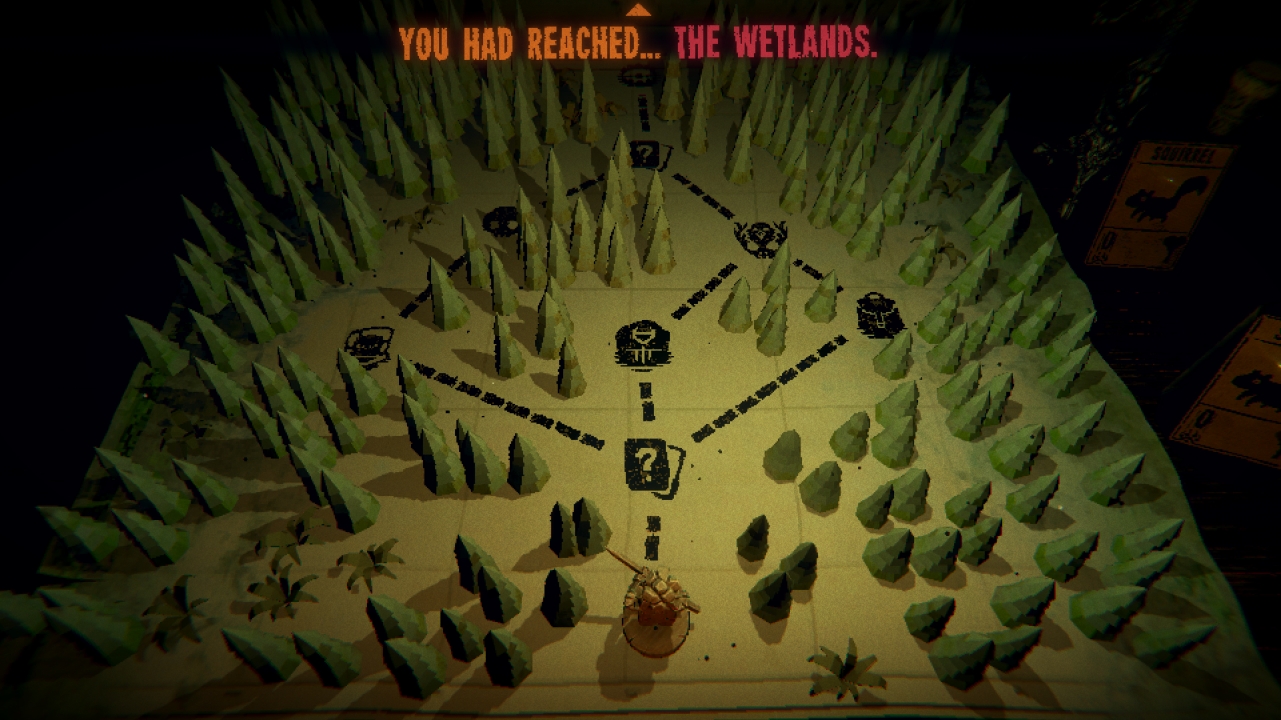 Creatures that require bones, though, are different. They’re cast using bone tokens, earned whenever any one of your creatures dies, be it from sacrifice or combat. They tend to be weaker and can cost more tokens, but with enough sacrifices or losses, they can become your ace in the hole, adding further twists and even more layers of strategy. One of these bone-munching fellows is the stinkbug, whom you find tucked away in a safe and who seems to have an odd relationship with the stoat. They also mention another possible friend, suggesting some more quirky partnerships to come later on.

Ah, and the part about the safe. Earlier we said Inscryption was “mainly” a card game, and that’s because while the card games are the meat and potatoes of things, there’s also a hefty dose of escape room influences added as well. It might not be evident on a path where you win, but after a loss, the stoat told me that a possible safe combination could be found inside of one of the guides which explains various sigils. Inside that safe, you find the stinkbug and a key. After snuffing out a candle, the key opens a chest with other puzzles, leading to more cards. It’s a unique genre hybrid that spices things up, and if the trailer is any indication, it won’t be the only gameplay detour. 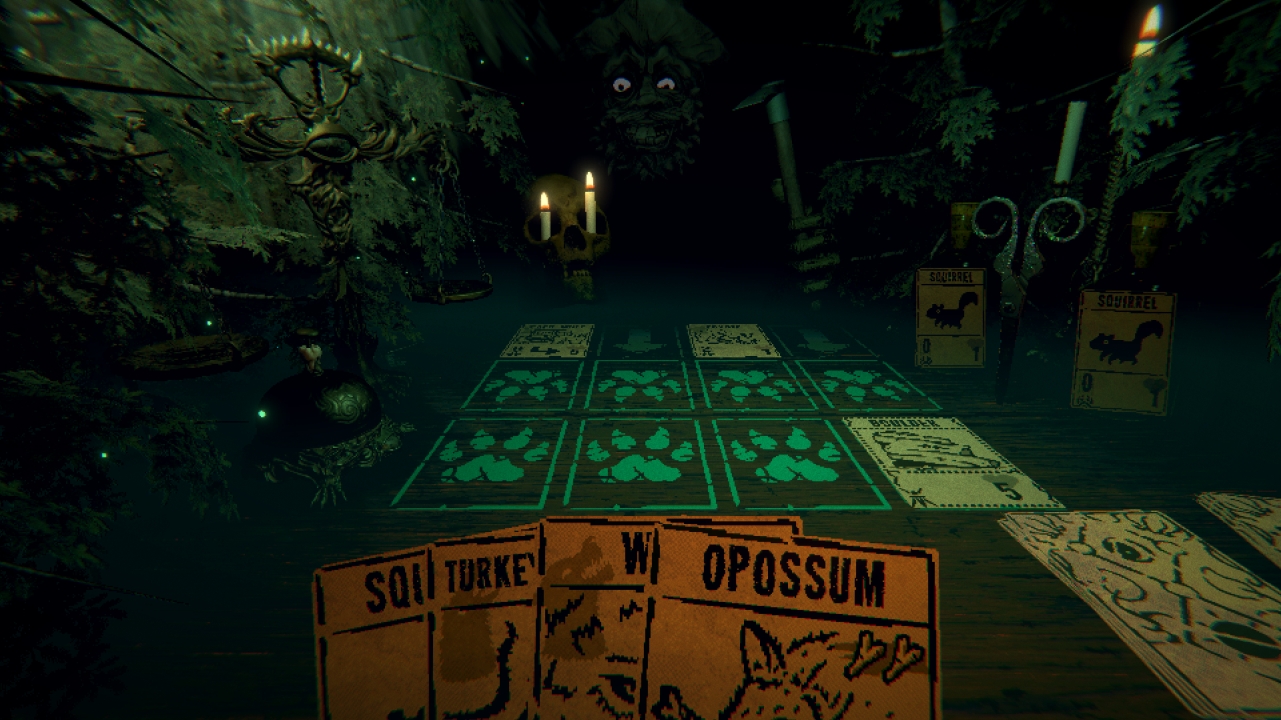 With a simple yet clever take on card games and deck-building, as well as a superbly creepy and cool atmosphere, plus Daniel’s signature gameplay twists and what’s sure to be a mind-blowing mystery tale, Inscryption looks like it could easily be a huge success when it hits PC on October 19, courtesy of Devolver Digital. If you can’t wait, though, there’s a demo of it available now. And yes, it might be best to lose at it the first time around.