I’ve spent all of the last few days trying to grapple with how I feel and what to say about Balan Wonderworld, the new platformer coming from Square Enix and the legendary Yuji Naka and Naoto Ohshima, creators of Sonic the Hedgehog and Nights. This is the first game from their new studio, Balan Company, and the name alone makes it clear that they’re hoping for big things from Balan Wonderworld. And from what I’ve played in their recent demo, I would say that despite being rough around the edges at times, the game does have a lot of potential…but considering the talent behind this game, the general public’s reactions to the demo, and the fact that it’s due out in less than two months, I’m not sure if it can afford to still feel rough.

Right off the bat, Balan Wonderworld doesn’t waste time evoking the imagery of Nights: Into Dreams, as we have our young protagonist — Leo or Emma, your choice — that struggles with insecurities in the real world getting sucked into a dream world by an enigmatic jester-like figure. That would be the titular Balan, the maestro that appears and takes them to Wonderworld in order to help them restore the lost balance of their hearts. To do so involves sending then though a series of levels based around the stories of people in similar predicaments, structured like plays with two “acts” followed by a boss battle. 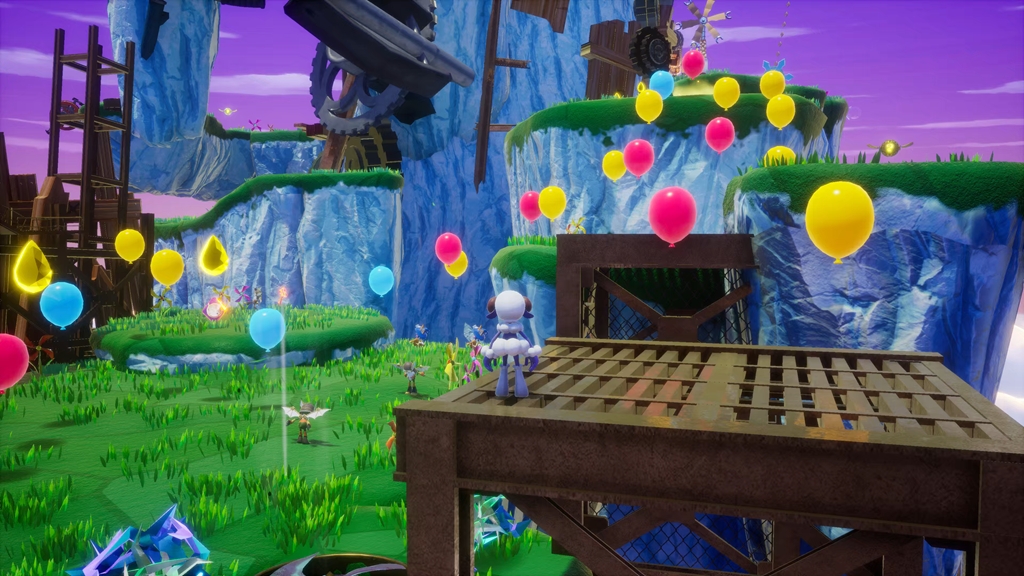 So the first level involves a story about a farmer, and as you first wander through it, things seem off. And not necessarily in a good way. It’s your standard “garden” set of levels, but there are versions of the framer just lounging around all throughout it and not reacting, sometimes at different sizes. Various characters are dancing all throughout it, but any time you approach them, they just sort of fade away. Scenery pops up as you go along and seems to curve into place when doing so sometimes, and there are weird “ripples” all throughout the air. It feels like it’s trying to replicate the surreal feeling of the mental realms in Psychonauts or the dreamlike imagery of Nights again, but it doesn’t get as weird and creative enough in the good ways, just the bad and puzzling ways.

I suppose this is to be handwaved with the idea that all of this is meant to be something like an elaborate play that we’re going through, but unlike, say, Dynamite Headdy or Puppeteer, Balan Wonderworld doesn’t commit to such a framing device. The best we get is a musical number that plays after defeating a boss, as well as the various eighty or so costumes you can don along the way. And here it shows that Yuji and Naoto clearly at least haven’t lost their knack for great character designs. Aside from Balan themselves being a charming, enjoyable personality, the various costumes are cute and colorful and express themselves through their powers, like Pounding Pig’s ground pound, Soaring Sheep’s ability to turn into a ball of fluff that can float through the air, or the ability to lock onto enemies and dive at them with the costume of…um…Aero Acrobat, which had me raise an eyebrow and caused me to ponder if that was a deliberate shout-out to one of Sonic’s rivals…

The costumes make up the meat of Balan Wonderworld’s gameplay, in that each one has a unique power. You press a button to activate that power, use the shoulder buttons to switch between costumes…and that’s really it. Seriously, this game relies on all of three or so buttons. Need proof?

These newfangled controllers are so confusing, I'm glad they laid everything out for us. pic.twitter.com/rpx3zp9Oxp

So it’s not exactly complex in terms of mechanics, but that’s perfectly fine. A simple platformer where you alternate between various powers in order to solve a variety of puzzles in order to find enough Balan statues to let you advance to the next story is good enough for me, just as long as it’s executed well. But unfortunately, even that suffers in a few key areas. The first is that for a game coming from the people behind Sonic and Nights, Balan Wonderworld ironically feels slow. Movement can feel stiff and jerky sometimes, the awkward way you have to stand still and pause when switching costumes builds up and becomes grating after a while, plus the iffy running animations make it seem like these characters should be moving faster than expected.

There’s also the fact that while the levels are well-built for puzzles and platforming, like with an area where have to use the Gear Prince costume to move platforms around or with any that require you to use costumes from past and future levels later on, they are not the best when it comes to combat. Combat in Balan Wonderworld just feels so token. Almost like nobody actually wanted combat in the game because it gets in the way of everything else, but was pressured into including it. You enter a designated open area, a group of enemies spawn, jump on them or use costume abilities for offense if needed, done. The only challenge comes from having enemies respawn at times if you enter the areas and that just gets annoying. The only exceptions seem to be the bosses, corrupted version of the story’s stars which aren’t the most taxing, but the game nicely encourages you to find multiple ways to defeat them, even rewarding you with a Balan statue if you find three different ways to land a hit. 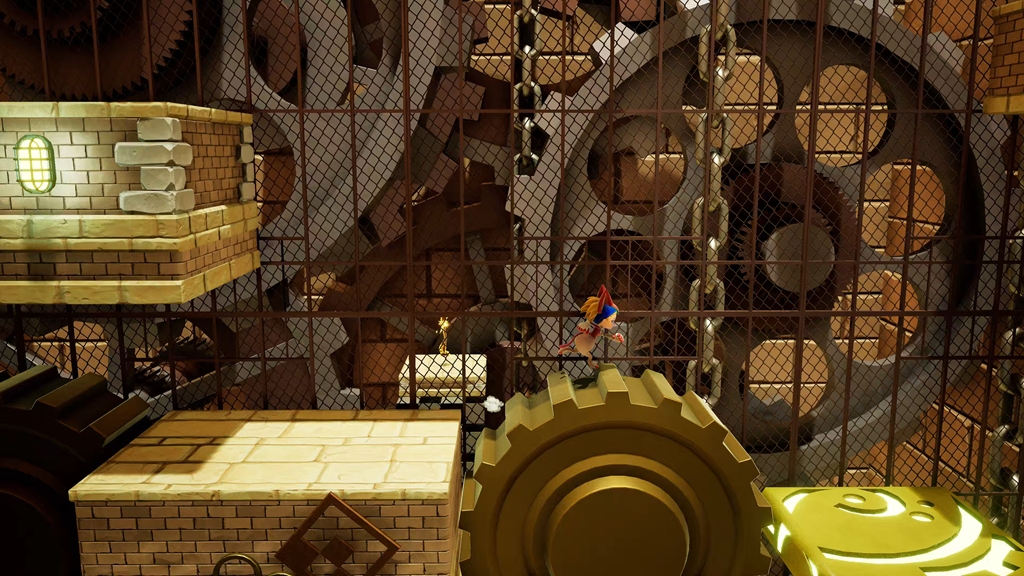 Earning that statue, however, is one of the few areas where Balan Wonderworld’s demo actually bothered to explain one of the ways to progress. It didn’t exactly inspire hope when Square Enix had to release a “tips and tricks” feature just to explain exactly what’s going on in some cases. For example, you can find a golden hat in each level to trigger a “Balan’s Bout” mini-game where you carefully have to time button presses with Balan’s shadow when it overlaps him, When it wrapped up, I had received an increase in the amount of crystal drops I had collected (and I had also hoped that the same cutscene and scenario wasn’t used for every instance of this mini-game), but as it turns out, I also needed to get a perfect ranking in every section in order to succeed and get another Balan statue, which the game never mentions.

Then there are the Tims. These are a batch of chubby little bird-like creatures that you can find in regular or egg form and that follow you around and wander about the hub level, the Isle of Tims. There you can feed them all of the various crystal drops you collect. Why? The demo doesn’t say. There’s also a weird “Tower O’ Tims” that you can build in the center by making the Tims work at building a counter up to a certain level. Build it up and the tower gains new sections that…process even more Tims and make the counter go up faster. Why? What is this for, game?

The crystal drops are there because if you feed the Tims enough of a certain color drop, they switch to more powerful forms various colors. Red Tims can attack enemies, pink Tims can find hidden items, etc. Not only did the demo not explain this, it didn’t even make sense to include this mechanic in a demo like this, as the experience doesn’t last long enough to significantly build up any Tims to the point where I can see these powers in action. Similarly, the tower still isn’t explained. No gameplay boosts or anything, it’s just there to build mystery and maybe evoke old clicker games or something. 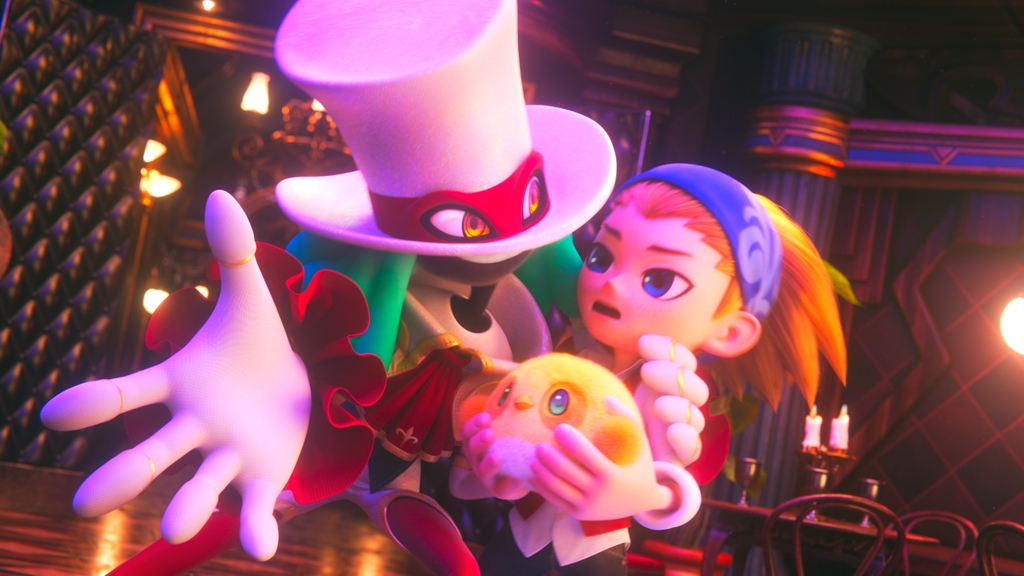 The reactions to Balan Wonderworld’s demo from the general public have been mostly negative but hyperbolic, to say the least (one person I saw said it looks like shovelware, another claimed it was Superman 64 levels of bad), and honestly I don’t think I can say that it gives off the impression of a truly bad game…yet at the same time, it felt like outside of the character designs, there wasn’t a single thing here that got me anticipated for the final product, largely because virtually every element that was on display felt off by at least a small amount in some form or another. The end result feels like this was something that was supposed to be an early demo for an event like E3, with someone from the dev team being there to explain certain features and how this is a work in progress, etc.

And maybe that’s what the demo actually is, just devoid of anything reassuring and with a ton of context in the game absent, but it makes you wonder why anyone thought this would be a proper showcase so close to the release. I can only hope that what I saw was from an earlier build that the finished product has greatly distanced itself from, because even if the finished game ends up being okay, Balan Wonderworld deserves a lot more than just being “okay.”