With titles such as Awesomenauts, Ronimo Games have proven that they know how to make entertaining action and worlds filled with several memorable characters. So when they announced their latest game, an action-filled dungeon crawler by the name of Blightbound that would feature over twenty different heroes to play as, it got me interested (the fact that they were teaming with Devolver Digital to help publish the game helped as well). It looked impressive, but the mention that it would be an online multiplayer game raised an eyebrow. Could a game like this succeed as a multiplayer-only title? After spending time with the beta let’s just say it has issues to overcome.

Admittedly, Blightbound didn’t exactly make the greatest of first impressions upon starting it up, as I was quickly greeted by notable amounts of lag and brief freezes, which seemingly came as a result of being online-only, as well as the inability to move left and right when using my controller for some reason. The lag actually wasn’t too horrible to deal with, but having to get used to WASD controls for a side-scrolling adventure like this was trickier. But with some practice, they became more easy to work with. It basically follows your standard multiplayer game setup with one basic attack and a series of special attacks, skills and ultimate moves mapped to various keys, all with cooldown timers. Simple enough to work with, although having to aim certain attacks via the use of a mouse felt confusing at times, if only because it felt unexpected in a game such as this. 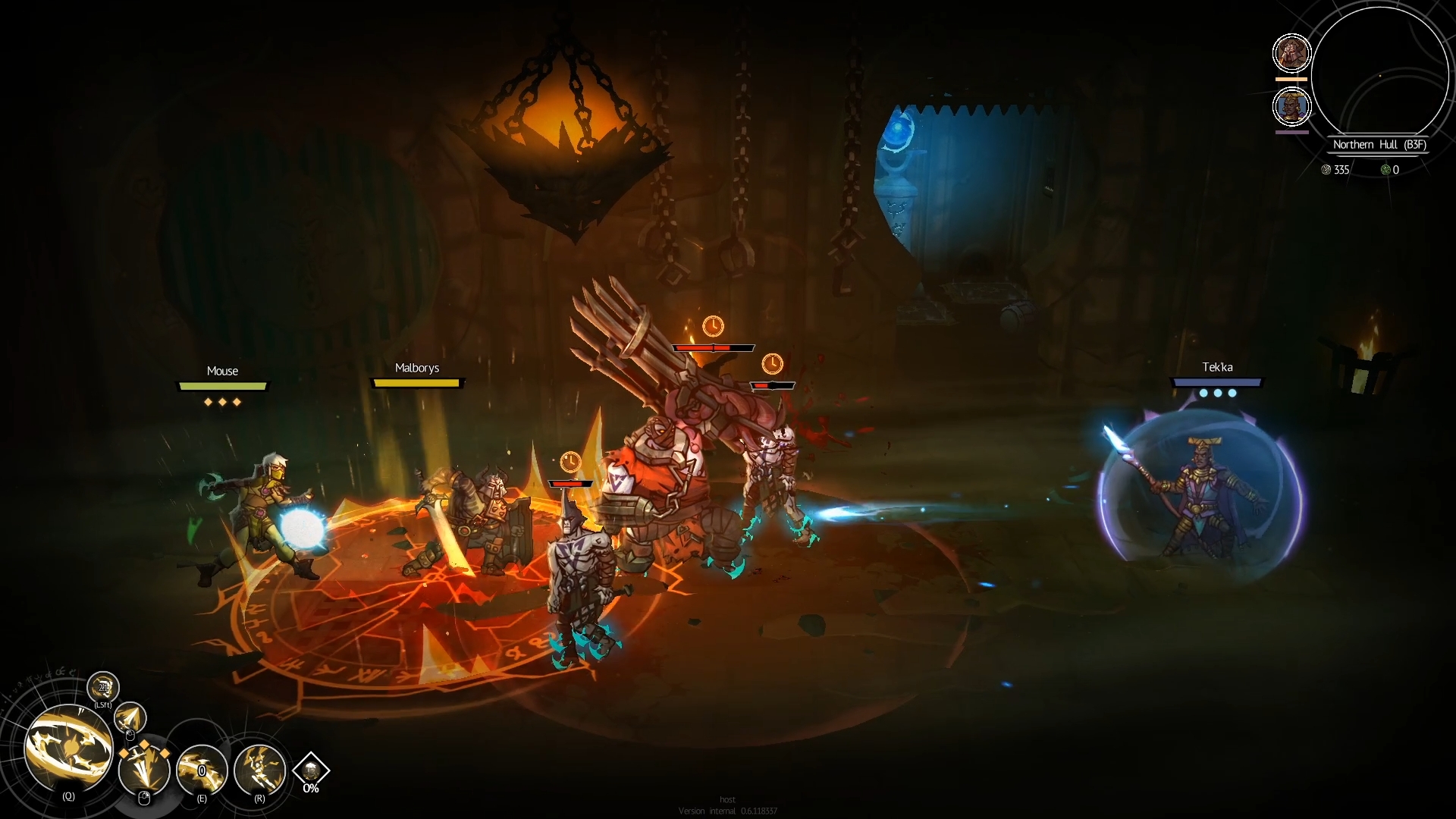 After getting through the tutorial, the world of Blightbound quickly revealed itself. In a fantasy land ravaged by the supernatural Blight, a group of heroes heads down into the Blight-stricken lands in order to combat the monstrous foes within, gather goods and rescue any survivors. This includes additional heroes that you can rescue and add to your team, each of which belongs to either a warrior, mage or assassin class. Each one has different skillsets and stats and are genuinely fun to experiment with. And the more you venture into the various dungeons, the more perks you also gain for your heroes. But this also increases their notoriety, which means deadlier monsters in certain areas, and exposes them to more Blight, which can incapacitate them after a while, meaning you have to properly manage which heroes are in rotation and find means to help them if needed.

The dungeons properly set the stage for some impressive action as well. Each one has different layouts and goals, such as a maze-like crypt where the goal is to raid as much loot from it as possible, ruined villages where the goal is to rescue as many survivors if you can or even an actual elevator stage where you have to hold out against waves of various enemies and hazards like full-on laser beams. It’s a nice and varied bit of areas to massacre unholy forces in (complete with creative enemy designs) and the combat is basically classic beat-’em-up action with a bit of an MMO twist in its mechanics. It’s a mixture that works surprisingly well, creating a blend of the simple and complex that results in rather solid gameplay and some classic, fast-paced brawls. Maybe a little too fast-paced, though. 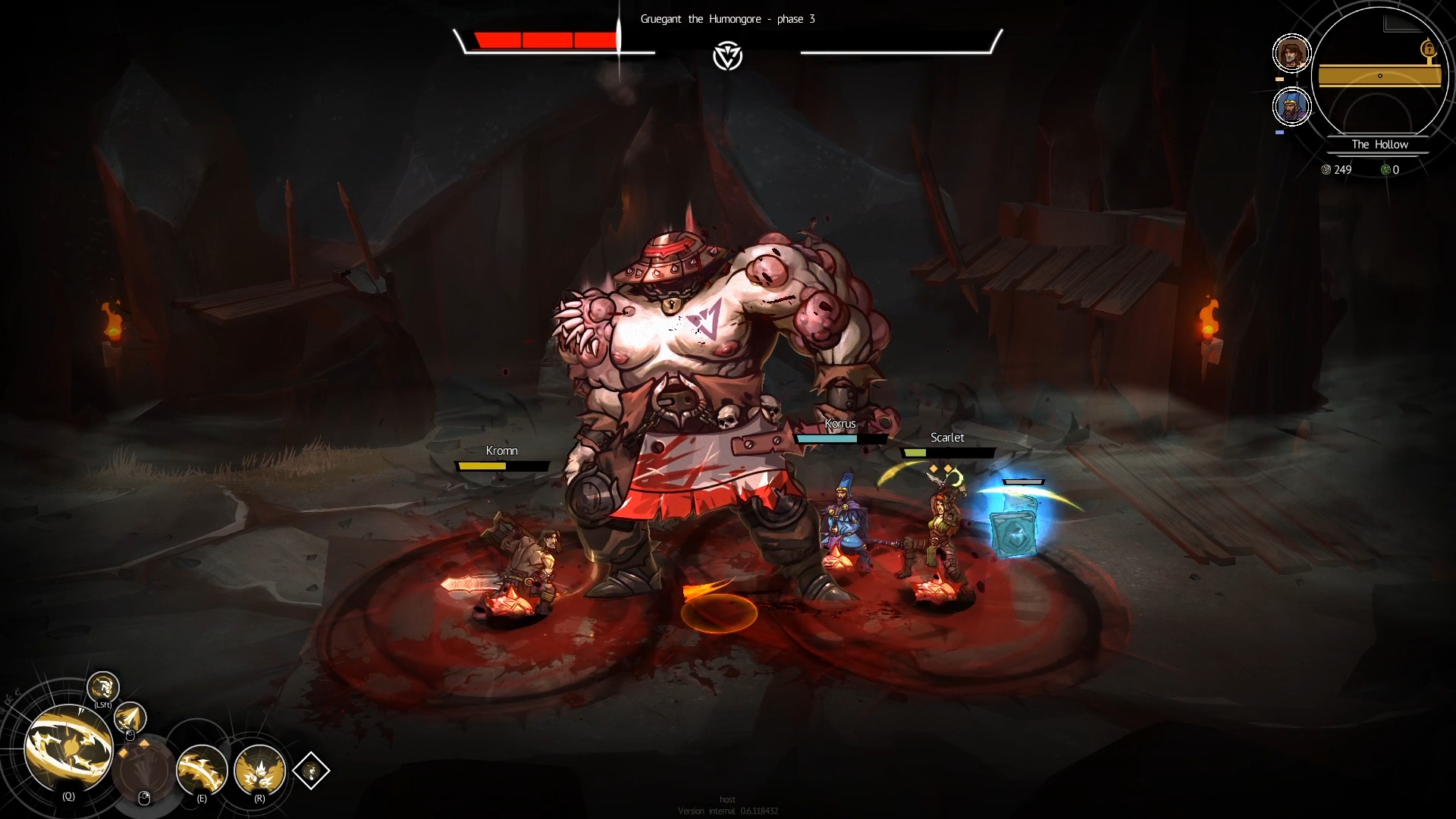 It could have just been a mixture of lag and the people I was playing with, but combat in Blightbound feels too fast at times. Other beat-’em-ups or dungeon crawlers aren’t afraid to take their time with various battles, but here each skirmish instigated by enemies popping up ended up taking less then half a minute. Heck, in one instance we had made it to the final boss, which the game introduced via a special intro and was massive and imposing, being a good twenty feet or so…and less then three seconds later, they were dead, thanks to everyone whipping out their ultimate moves. It just feels like it’s too easy at times to zip through each dungeon, with the right combinations of attacks taking down enemies so fast that there’s never much time to enjoy the atmosphere as a whole. A lot of it just felt like a blur, with most of my companions defeating whole enemies before I could even glance at them.

And as such the game does have a slight problem making an impact. Even during moments where interacting with objects in the world reveal little bits of lore, like a vase filled with notable goods or the presence of a shopkeeper in a crypt, there was never any time to absorb any of it because my partners decided to move on instead, defeating even more enemies while I was trying to pay attention to any story. This is what makes me question if Blightbound can truly be as effective as an online multiplayer game, as opposed to a single-player game with co-op. I would still say that the combat is fun and the levels are varied, but unless you can gather a group of friends, it can feel like just another hunt for loot, which makes it hard to get invested.

Blightbound also just feels like it has notable balance issues in general in its early form, with certain special attacks or combinations of attacks being overpowered. As a way to possibly counter this, there are no actual health pickups to be found along the way. Instead, players have to rely on the mage, who has a heal spell included among their skills, creating a simple, glowing ring that heals anyone in it before it disappears. But now this meant that should the mage lose all their health and get knocked down, it feels almost impossible to pull off a comeback. You can crawl around when knocked down, hoping for someone to revive you, but with enemies designed to be aggressive and coming in large groups it can be too easy to become overwhelmed. 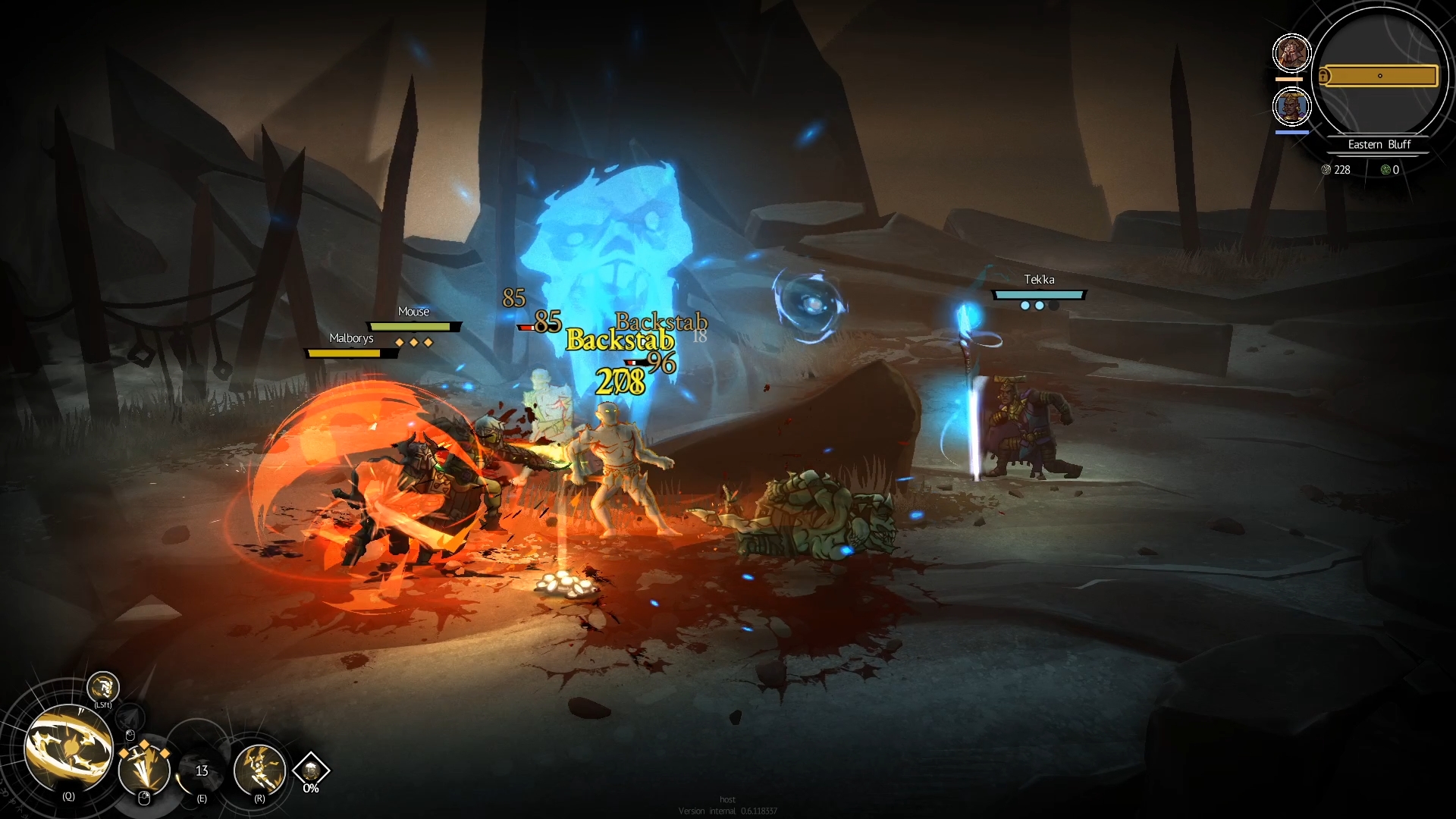 I couldn’t think of a single moment where two players got knocked down where there was a way to recover. There was seemingly no coming back, not helped even further by the ones who do get received coming back with a pitiful amount of health, as well as no mana for the mage to help anyone recover with the only healing move they have. It is just way to easy in Blightbound right now to see a one-eighty happen and go from nearly zero-effort battles to being thoroughly screwed.

I would still argue that there’s an excellent and unique dungeon crawler inside of Blightbound, but after playing it for a while, it kind of feels like its online multiplayer hook may actually be holding it back a bit. Like with a lot of titles that try to put the focus on multiplayer, the attempts at story, lore and atmosphere feel undermined by the potential behavior of your party members, the difficulty feels imbalanced in an attempts to compensate for three players, and there’s technical issues that can result from online play. Again, maybe as a single-player game with optional co-op, it would work better, and there is still fun to be had, but Ronimo are going to have to work hard to make this work as is. But as Blightbound comes out on June 29 for the PC in Early Access, feel free to check it out for yourself.