Okay, yes, I admit the headline is a bit forced, but I seriously could not get the Radiohead music out of my mind even after just hearing the title to Other Kind Games and developers AuraLab’s upcoming graphic adventure game, Karma: Incarnation 1. Then again, considering how surreal and odd the game is, it actually might go well with some of Radiohead’s stranger stuff as well. You may have seen dialogue-free games before and odds are you’ve seen games centered around moral choices before, but rarely do you see the two together, and rarely in such a package as eye-popping as the one in Karma.

Karma is the story of a little creature destined to be reincarnated as mighty dragon in order to stop the evil forces invading their worlds and save his beloved…but winds up coming back as a worm named Pip instead. Not to be brought down, though, he still sets out his journey through this bizarre set of lands, which immediately stand out due to their prominent use of jet-black colors for the characters and most of the ground you walk on, allowing for the highly detailed and even psychedelic backgrounds to stand out, along with the cartoonish expressions on each character’s face. It truly is a sight to behold, though, as you eagerly anticipate which insane sight, from eyeball trees to weird deity-like mother figures, you come across next. 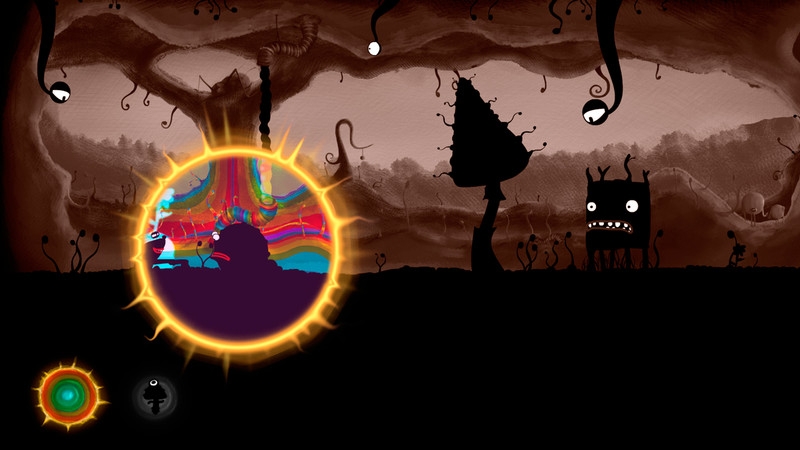 The tricky part when writing about Karma, though, is that it’s hard to tell from the demo (which covers the very beginning of the game), just how much and in what ways the game’s central karma mechanic will actually come into play later. In fact, from the way the game is structured, it can be near-impossible to tell when you have made a moral choice. The only moment that comes to mind for me here is when I needed to move a massive beast in a cave blocking the path. I had interacted with a little flower-like creature outside, devoured it, and Pip then grew a thorn (each choice affecting your appearance), which was used to stab the behemoth in the behind. But was it possible to solve this without killing the smaller creature?

Not that I’m complaining, mind you. Considering how moral choices in recent games tend to be highlighted and telegraphed in advance, it’s a breath of fresh air to see one where it really does just feel like any action in particular could play an important role in the tale without having to be informed of it. Outside of the karma mechanic, though, the game still plays like a standard point-and-click adventure game, and while there were a couple of bits that were frustrating due to a lack of direction (a dialogue-free style being a double-edged sword at these times), there was still some very solid puzzle design on display, and mechanics such as the ability to emit an aura that reveals hidden interactions definitely help to add variety.

So indeed, it looks like everything Karma: Incarnation 1 has given just may be enough to please both fans of adventure games and those looking for something highly unique in the departments of gameplay and visuals when it comes out for PC next month. It might be worth it alone just to see what type of bizarre creature Pip can eventually wind up turning into due to your choices (some sort of modified bear, I assume?).