I honestly never expect to preview a game twice. At least, not within a relatively short time period. If it’s been, say, over a year or so and there have been heavy, notable changes to what’s been shown off so far, sure, I’ll take a look at it again. But not when it’s only been about six months later. So why, then, am I here talking about Katana Zero again after having already taken a look at it back in September?

The answer is simple: It’s just that friggin’ good of a game. 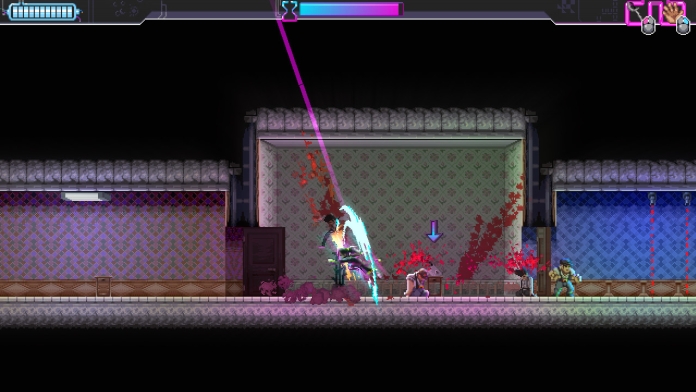 Yes, the adventures of our drug-addicted samurai friend just deserve as much attention as they can. Now, you can check out all of the details concerning how fast-paced, hardcore, and entertaining Katana Zero’s 2D Hotline Miami-esque gameplay is via the link above, so I won’t bore you with any additional details concerning that. What is noteworthy is that where still some more levels to check out that we were allowed to give a spin, including a brand-new stage for our slashing pleasure. So where exactly would we be carrying our hits out this time around?

Well, the hotel provided a notable place to start, if only for a memorable intro sequence. When coming across the receptionist while clad in a traditional Japanese robe and carrying our titular weapon, dialogue options appeared, along with an option to just end things and move on. We could do that, or we could just reply with other picks, claiming that we’re wearing a bathrobe given as a gift and our sword is a family heirloom, all delivered in what felt like a gleefully snarky exchange from an action film. In fact, Drive was stated as a direct influence on Katana Zero, at least in terms of style, so action films are indeed in its blood. After a few skirmishes, it was time to head upstairs, where we had to slip out onto a balcony to past some security alarms, leading to entire battles taking place behind a wall in silhouette, in an attractive scene. 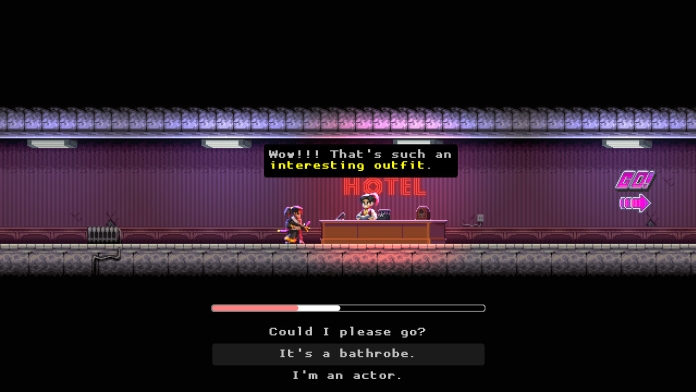 But the real highlight here was the aforementioned new level added, which was a movie studio, somewhat appropriately. After a discussion with an old acquaintance in a nice bit that fleshes out the plot, they ran into the studio after their murder attempt was foiled by a deflected bullet. We only got to see two of the three film sets here, one being a sci-fi film where we got to chop up working robots and fling chemicals into large crowds of armed gunmen. It was a blast indeed, but then we got to the Temple of Doom-esque area, and that’s where it was shown off in all its glory…the mine cart stage. Yes, you get to ride a mine cart which automatically runs over enemies through a large tunnel while using your Cronos-fueled slow motion powers to hit switches at high speeds in order to open gates before you slam into them, having to jump out and dice up a few more baddies in time to jump back into the still-speeding cart. It is glorious.

That one section actually sums up Katana Zero’s appeal almost perfectly, where old-school video game elements mesh with more modern elements to create a challenging, bloody, stylish piece of retro-styled action with a deep plot. Intense combat, an intriguing story with some wit, and neon-spiked hi-bit graphics…yep, this game is still packing what it needs to be an absolute delight when it comes out later this year for PC, so make sure to keep an eye on it.