What if Minecraft was a deeper game? How would a game-world look if the players built it more creatively than the development team ever imagined? What would happen if players had in-game tools that gave them opportunity to earn real-world dollars for their creativity? These questions and more come up once one begins to unwrap the mystery of Landmark, the upcoming MMO being developed by Sony Online Entertainment alongside the highly anticipated EverQuest Next. It’s hard not to get a headache when thinking of the downright insane potential of Landmark, as this is a title that has the potential to usurp Minecraft as the go-to fountain of creativity game (whether or not that happens remains to be seen). It could wind up giving future developers their first chance at creation inside of a game-world. Hell, Landmark could even turn into a part-time job for the incredibly determined and creative souls.

Attempting to wrap one’s head around Landmark is a dangerous proposition. At its core, Landmark is a creation tool inside of an EverQuest-like setting with limited player vs. player interactions. Players are able to make anything and everything they desire, so long as they conform to the minimal rules put in place (namely not building thousands of things right on top of one another). With a more robust creation system than Minecraft and far less obtuse mechanics than Microsoft’s Project Spark, Landmark strikes a happy medium between casual design and hardcore creation. I was able to see staggering player creations in real-time, from intricate manors to a full-scale virtual recreation of the ThunderDome. Imagination oozes out of every inch of Landmark‘s player-created world; walking around the environment feels like wandering through someone’s dream amusement park.

On the surface, a player-designed MMO is certainly interesting, but not necessarily mind-blowing. Landmark is still in a closed beta state, so there isn’t a whole ton of things to do at this point other than create. Player vs. player combat was just added in August; this is very much a game still in development (or is it a game always in development?). Dig a bit deeper, and it’s simple to see how terrifyingly ambitious this project is.

Imagine if World of Warcraft had a fully customizable world as opposed to a standard, theme-park style environment. Players would be able to go on raids, complete quests, and earn loot in an environment bearing zero rules. Who’s to say that a massive ferris wheel inside of a volcano shouldn’t be the setting for an intense crusade? Why can’t hundreds of creatures made out of sneakers attack players in Candyland? If done correctly, Landmark‘s still-in-development quest system could bring endless fun to an endless world. Players could witness some of the most unpredictable gameplay available on the market in areas only limited by one’s imagination. In fact, we’re already beginning to see some of Landmark‘s epic potential on display in the countless player vs. player arenas popping up constantly. 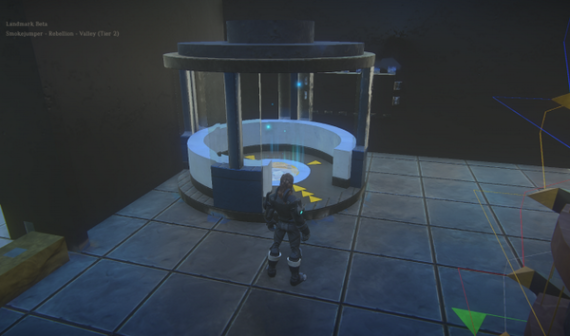 Typical multiplayer games tend to launch with ten to fifteen maps, a seemingly large number considering most players will probably only enjoy a handful of them. How much longer would the public play Titanfall if its number of maps was infinite? What if each of the Super Smash Bros. had a better creation tool than the frustrating, low-asset version we’ve struggled through? Landmark gives players the ability to have unlimited map packs at their disposal, giving it the potential to be an endless multiplayer experience. Why should gamers be limited to a handful of maps when they could have more than they’d ever be able to play? Sure, some of Landmark‘s arenas will end up being atrocious, but that’s beside the point. The simple, yet robust creation tools at the player’s disposal give him or her the opportunity to create the next Blood Gulch from scratch. How is that not brilliant?

Unlimited player vs. player maps and the potential for an endlessly creative MMO experience aside, what absolutely rocked my brain was the opportunity Landmark is giving to hopeful developers. Sure, sitting down and creating a castle in Landmark is quite different from coding for hours on end, but the chance to flex one’s creative muscles inside of a game-world will assuredly give someone his or her development start. Think about it: if you become the king or queen of asset-creation in Landmark, who’s to say you’re not determined enough to become a star developer given some time and experimentation? 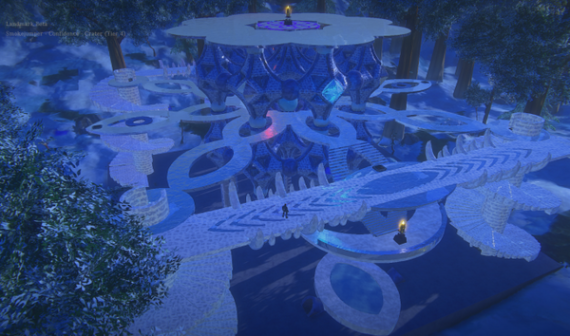 However, if you’re not the type to create everything from scratch, fear not, as a brilliant solution has been put in place. In what is, without a doubt, the most ingenious microtransaction system I’ve ever seen, players can sell assets that they’ve created on an open marketplace to aid other players. When a given item is sold, Sony Online Entertainment receives half of the money, while the player who created the asset gets the other half. This allows the Landmark team to directly benefit from the creativity their tool inspires, new players to forgo feeling overwhelmed, and dedicated creators to profit from their efforts. What’s more, every asset on the store, in theory, could be replicated given time and effort, so players are never forced to partake in this marketplace experience. It’s not a huge leap in logic to understand what this system means: any player can get good enough at Landmark to turn it into a part-time job.

No single game I’ve seen in 2014 rocked my mind quite like Landmark. Granted, Sony Online Entertainment certainly has some work to do if it wants to fulfill every bit of Landmark‘s staggering promise. However, every great product starts with a phenomenal idea, and there’s absolutely no doubt that the framework has been set for something special. Whether you want to spend thousands of hours becoming the next great creator, or simply pop in for a few hours a week to work on your pet project, Landmark has you covered and then some.