There are some skills you learn in school that you just sort of forget about. The stuff you were required to learn but found to be useless later on in life, like cursive writing (outside of your signature, of course). Amongst all of that, at least in my case, is typing class. After all, who cares about proper hand placement or whatnot, as long as what you’re writing still turns out fine? Well, needless to say, New Blood Interactive and developers Labcoat Studios knocked me down a peg thanks to their upcoming VR game Lazer Type, which proved how proper typing skills can be valuable when you’re actually being attacked by words.

There isn’t really any plot or setup for Lazer Type (none seen so far, anyway), nor does there really need to be one. Words are flying at you, you type the words before they reach you, they get blown away. Simple stuff and the ’80s cyberspace-style aesthetics are a perfect match for what is essentially a full-on arcade game. But Lazer Type obviously has an edutainment side to it as well and comparisons to the likes of the Typing of the Dead can’t be brushed aside. It’s similar in concept, but has its own unique charm. 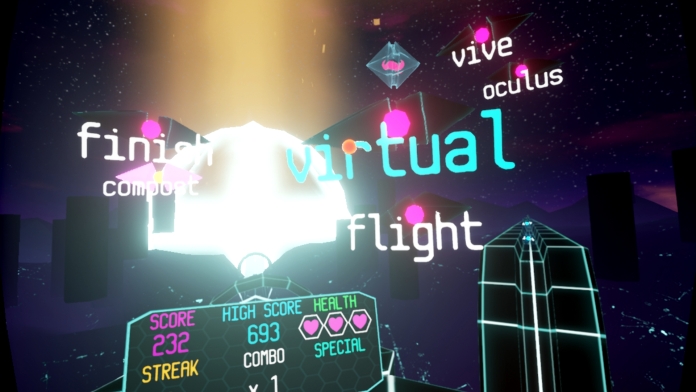 So we get to the actual typing controls, and this is where the VR setup begins to act like a double-edged sword. On one hand, actually having to tilt your head around to each flying word and aim at them is easy and fun. On the other hand, though, the setup is designed so that you can’t actually see the keyboard. There is a virtual keyboard in the area you can look down at, which reacts to what keys you press. The problem with this is that once you slip up, it can be extremely tricky to try and re-orient yourself on the keyboard, since you can’t your hands in relation to it. It just feels at times like you already have to be good at typing before you can become skilled enough to tackle the game which can help teach you typing, which just feels iffy.

Then again, I could be wrong. After all, the demo I played only contained the game’s Arcade Mode and not the Learning Mode designed to lean more towards edutainment. Or it could just be that my horrible typing skills hindered me a ton (which in retrospect, is probably not something that I should admit as a journalist). At the very least, I can  say that Lazer Type is still an absolutely creative VR experience and game in general that probably can teach you a lot about how to type like a pro and blast the hell out of the English language in the process, so keep an eye out for it when it comes out later this year for the Oculus Rift, HTC Vive and GearVR.