There’s something wonderful about getting away from everyone for a while.  The entire world can stay over there somewhere as the wind rustles the trees and birds chirp away on the side of a peaceful mountain.  Barreling down it at top speed is a nice bonus, preferably while keeping both tires of the mountain bike attached to the ground for a reasonable period of time, but a nice amble exploring the trails is good too.  It’s a mountain, after all, and doesn’t care how you wander its slopes.  The paths twist along the sides, through wide open areas and past steep cliffs, and a careless moment is enough to send you over the edge to drop hundreds of feet straight down, but the right path and a little control means you can reach the base with at least a few bones still attached to each other.

Lonely Mountains: Downhill is a mountain biking game with most of the usual arcadey bits sanded off.  Titles like the PS2’s Downhill Domination or more current Descenders are all about speed and tricks, with the mountain being the place the action just happens to occur, but Lonely Mountains: Downhill is much closer to a recreation of the actual experience.  A low-poly idealized version of it that’s generous with the physics, taking place on a mountain that exists purely to give a biker an interesting place to ride, but still focused on recreating a recognizable version of the sport. 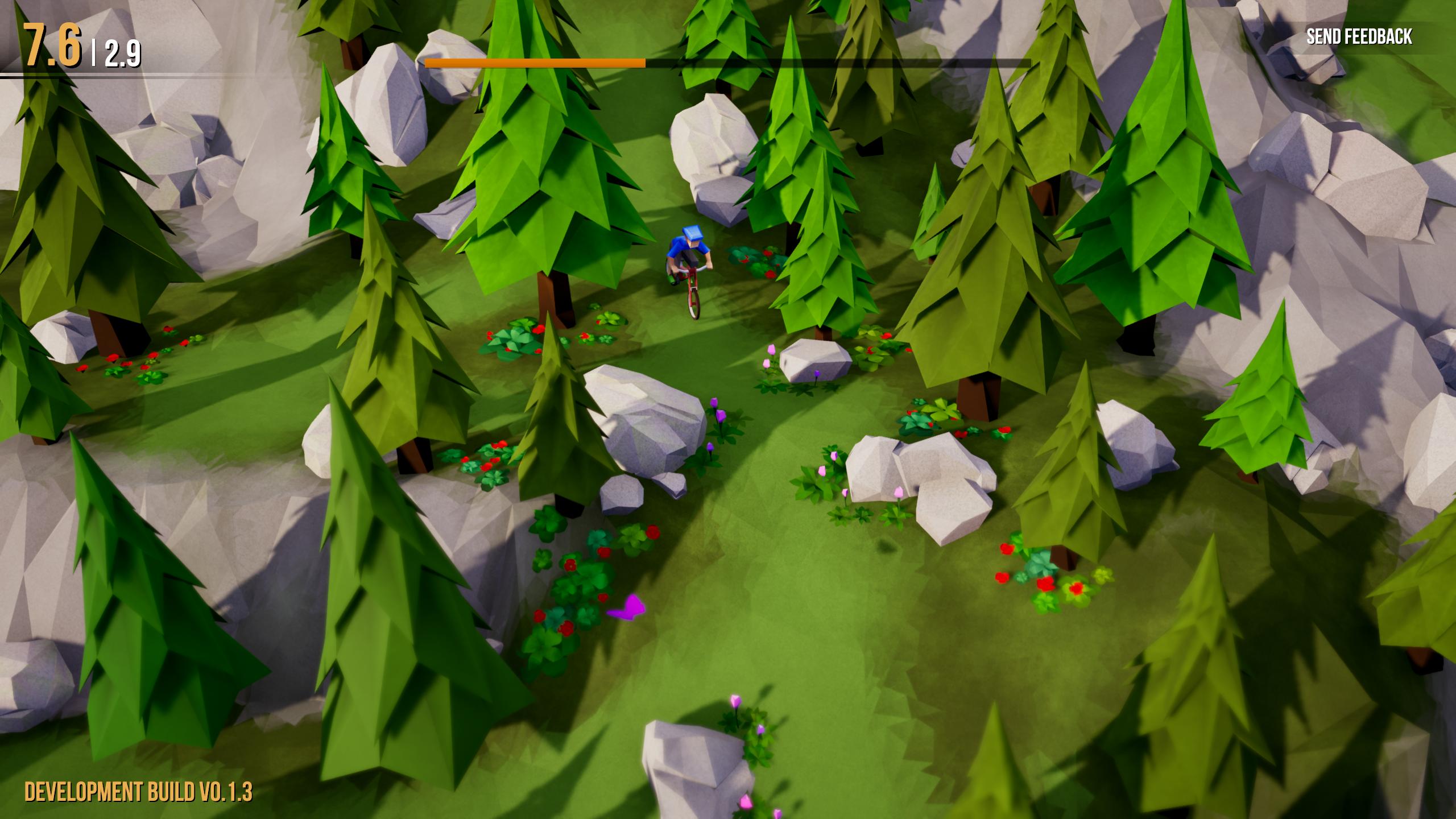 The current build has a total of one level available, but it’s a mountainside criss-crossed with paths that interconnect to create a huge number of possible routes down to the base camp.  While the leaderboards are all about getting from pinnacle to the final checkpoint in the fastest time possible, focusing on that one specific goal would involve ignoring a huge amount of the content waiting to be discovered.  A path that involves a series of drops is much faster than one ambling past a gentle field with butterflies flitting about the flowers growing beside a pond, but it’s also nice to take a second and enjoy the atmosphere, or maybe see if there’s a shortcut hiding in there somewhere.  The mountain has no barriers, after all, and you can create your own route so long as you can survive any drops it may contain.

Progress down the mountain is gated by checkpoints, generously spaced out once you’ve got a little familiarity with the course.  Once you’ve cleared a checkpoint it logs your time from the previous one, and any fall will set you back to it nearly instantly with the clock reset.  This means you can experiment with the route to your heart’s content, playing with speed and angle to perfectly land a tricky jump or test a path to see if it leads off a cliff.  Once you make the bottom of the trail the game tallies up your checkpoint times and gives you a spot on the online leaderboards, where competition is already pretty insane even with the small number of testers. 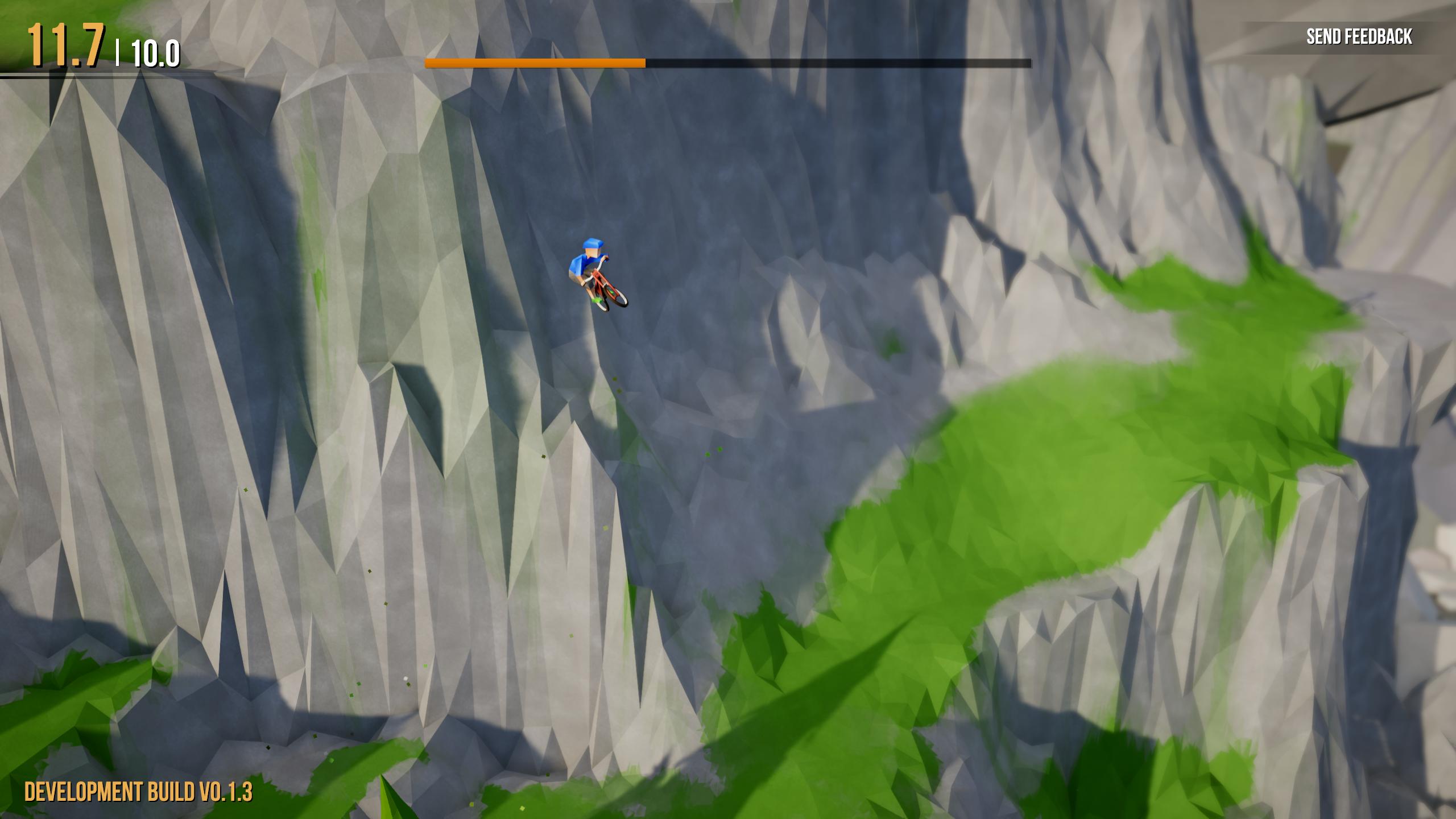 This is not going to end well.

While Lonely Mountains: Downhill is currently available it’s on sale in a somewhat unusual fashion.  It’s not ready for the public yet but, having had a Kickstarter, the early builds are available to backers at a certain tier.  If you want to join in the testing the development build is open to anyone at a little less than the similar Kickstarter tier, $50, except without the exclusive gear for backers.  On release it’s going to be a much more reasonable $20, and the recommendation is to wait unless you really want to support the developer while the game comes together.

What’s available right now, however, is working nicely.  The bike handling feels good, with subtlety to its controls once you start figuring out how the dash and brake can work together for enhanced cornering.  The mountain itself is completely unforgiving of errors, and a little too much speed is the difference between landing a jump or flying hundreds of feet off a cliff.  Whether you aim for a top time on the leaderboards or a nice bike down the mountain, though, Lonely Mountains: Downhill is a lovely trek to peaceful low-poly nature away from the noise and distractions of the world.