There’s no shortage of roguelikes, dungeon crawlers and deck-builders on the indie circuit, so it takes a lot to stand out among them. But Loop Hero, the latest game from Devolver Digital and developers Four Quarters, could potentially end up being the next big hit among the genre. It has already achieved a level of addictiveness met only by the true greats, having basically almost delayed this preview because I was too busy playing it, wanting to dive in for one more run. That’s right, it’s the productivity killer of your dreams.

Ironically for such a dream game, though, Loop Hero revolves around a rather nightmarish concept. Basically, the evil Lich has destroyed the world, creating an endless cycle of chaos where time is meaningless, voids surround nearly everything and nightmarish creatures roam the land. It’s up to one lone hero now to try and defeat the Lich, ending the time loop created in the process. There’s just one problem: when time is meaningless and near-endless oblivion causes virtually anything to be erased, including memories, trying to make any progress is trickier than expected. 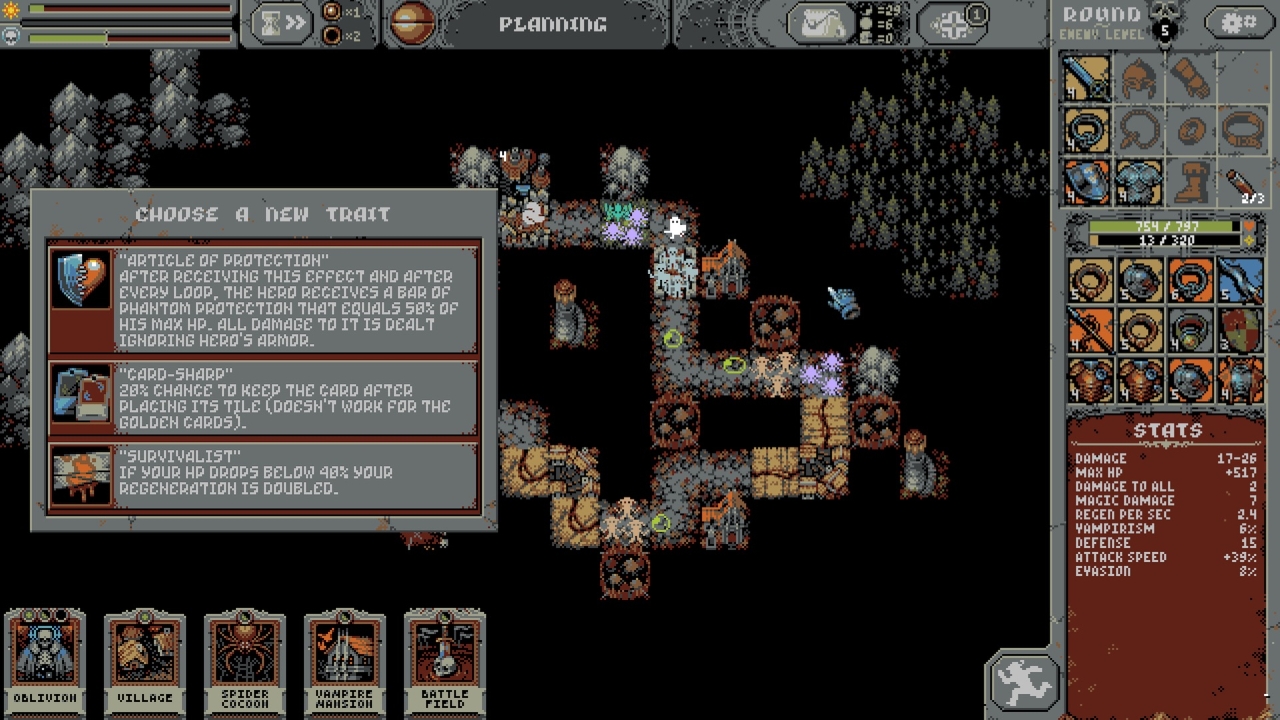 At the start of each expedition, a looping path of tiles is generated, which our hero automatically wanders along. At the start, it’s populated by little more than a few slimes. One you come into contact with one, combat begins, kicking off an automated semi-turn-based battle. Once the slime is vanquished, you earn either a card, an equippable item, or both, depending on the circumstances. Equipping weapons, armor and the like is something that can be done at any time, but tying into the theme of everything being erased, any new item you equip means completely throwing away the previous one. Inventory space is also limited, so once it fills up, any new item gained immediately knocks one off, lost to the void. So you have to be careful in managing your equipment.

It’s playing cards and laying down parts of the world where things truly get interesting, though. Loop Hero is basically the sort of RPG where you have to be both the dungeon master and the adventurer, which means expertly planning things out. Areas like groves and cemeteries you can walk through will generate resources, but also spawn wolves and skeletons to fight. Lighthouses can speed up your hero’s movement, but make any enemies in the range of it speedier as well. Villages can heal you and provide quests by creating stronger enemies that drop valuable loot, but the quests become mandatory, so having many of them making for more powerful enemies can be a hindrance. 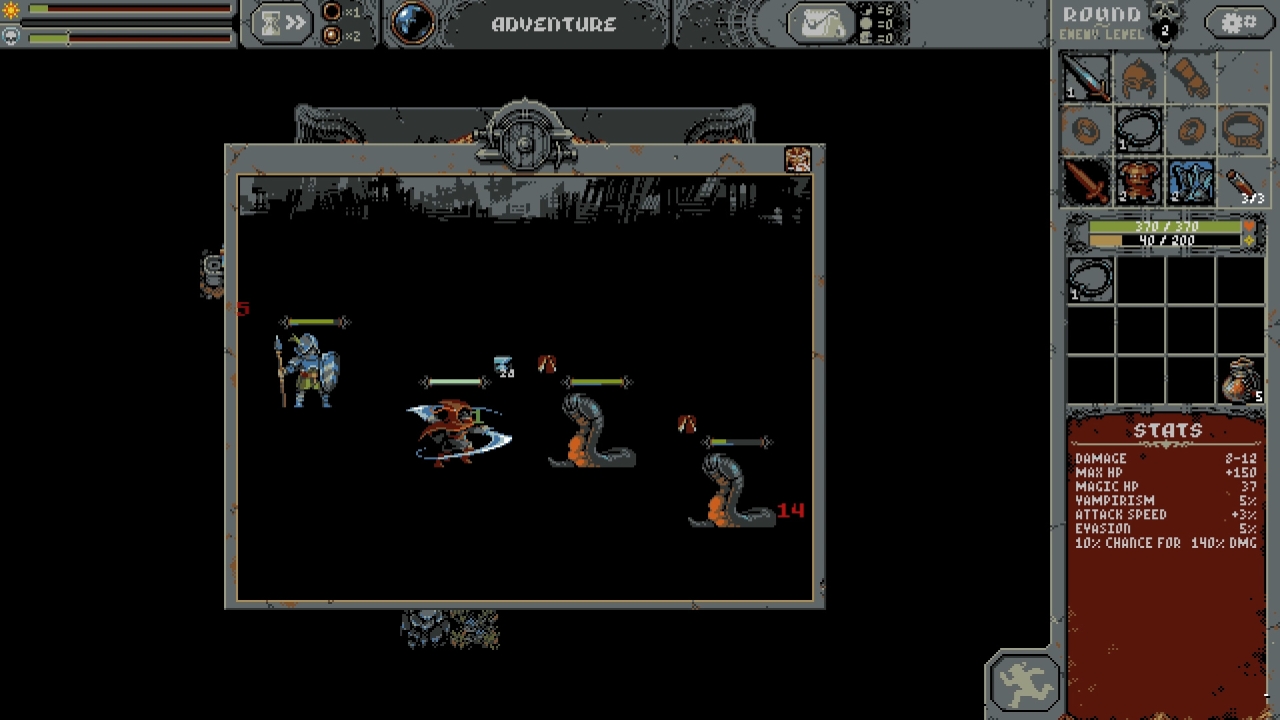 Basically, practically everything you place on the field will make your current expedition in Loop Hero more challenging in one way or another, playing off of the classic risk/reward factor found in roguelikes. More enemies means more loot, and more areas that spawn enemies can get you more resources. And you have to manage the passing time as well, since certain areas trigger certain events on certain days. So with slow speed and poor planning, you could find certain tiles completely overrun with monsters waiting for you, which could easily make for a quick death. Plus, you have to consider where certain areas are placed, and how you can potentially modify it to your advantage if possible. Sure, placing a spider nest alongside a battlefield and a grove at first seems like it can create a good crop of monsters to farm at first, but they get stronger with each successful loop, and can pile up quicker than expected if you get caught up spending time on other battles.

It sounds intimidating, but like a lot of the best roguelikes, the genius lies within the simplicity, as Loop Hero basically has you just drag and drop everything in order to manage your hero’s adventure. It’s both laid back and intense at the same time, especially as the loop gets more and more crowded, and filled with even more heavy hitters like gargoyles and flesh golems as a result of your building…and especially when the Lich appears. Essentially the boss for the expedition, it lost to them the first couple of times, yet thanks to an upgrade and armor that provided vampirism and regenerating health, among other things, I defeated them…or one version of them, anyway.

After each expedition (although you can keep going after the Lich’s defeat in order to gain more resources, fleeing when you choose), you return to the settlement with the survivors, except due to the state of the world, they have no recollection of any victories you’ve achieved or memories of much of the world in general. So throughout you expedition, you essentially have to bring back fragments like sticks, rations, and metal that have somehow remained and basically create vague memories, and with enough expeditions, you can recall various structures to build back at the camp, like gyms, kitchens, cemeteries and more. These serve as your permanent upgrades in Loop Hero, earning you potions, new cards to help alter your deck, new skills to learn and even new classes like the Rogue, who has a wildly different play style, earning trophies from enemies instead of loot and basically exchanging them after each loop. 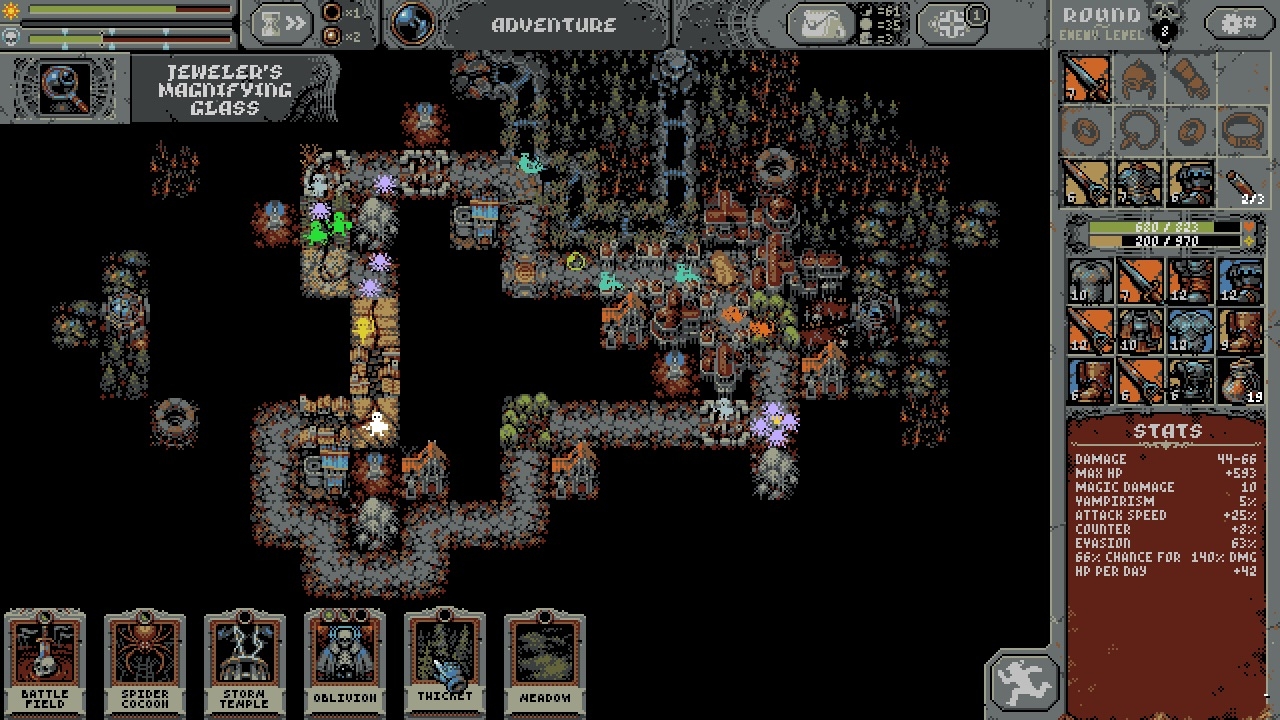 More importantly, though, the bits in between expeditions are where you get little bits of world-building and story. So far the tone seems to be almost perfect, nailing the absolute darkness one might expect in a cosmic horror story, while also having the occasional bit of light-heartedness for contrast, as to be expected with a game utilizing graphics and an interface straight out of an ’80s RPG on the PC. The sprites are impressive, especially in battle, where they turn into Final Fantasy-esque monsters as opposed to the more primitive characters on the map. The end result is a tale that has me hooked, and several upgrades to aim for.

Loop Hero isn’t just an extremely addictive dungeon crawler that scratches a special itch. It’s also one of the most unique roguelikes I’ve seen in a while, taking full advantage of its endless loops. It has a certain old-school RPG feel while still feeling modern, and requires a hefty amount of strategy while still remaining easy to get into. Basically, it seems to have everything perfectly balanced so far (save for the occasional run where the random number god isn’t on your side) and there’s still a lot more to discover. Loop Hero easily has what it takes to be one of 2021’s gems, so pay attention for when it arrives on the PC later on.