How much should one spend talking about the minor details circumnavigating a game’s core? Does it come across as having been distracted away from or flat-out refusing to tackle the bulk of what’s on show? Not to say finer details are never a worthwhile area to indulge on, but how best to talk about a game in general totality when it’s these very quirks that are the stand-out? Right you are in your assumption that this piece is to divulge on gameplay mechanics, weapon variety, controls and such, I’m confident in my experience thus far that what has stood out to me about Loot River is in everything else. The areas people may not expect to notice when it comes to a run-based roguelite with challenge, learning via one’s mistakes and dogged determination, at the epicenter. It helps that the game’s means of traversal, shall we say, is unconventional here but that of its chosen aesthetic — specifically the technical side of things — requires, desires maybe, a second look-in.

But admittedly yes, there’s some need to divulge on the gameplay on show in this discussion. Though I’m sure by the time I’m done on this brief segment, I won’t be out of the woods when it comes to justifying focus away from combat and on everything else around it. Everything else that has cemented Loot River as one I’m even more eager to play through in its final form, hopefully at some point in 2022. As you may or may not know, Loot River’s pitch has been an interesting one; if nothing else, its latching onto one of current gaming’s most eye-rolling comparisons — to that of Dark Souls — has been bold. Even if bold and foolish may mean the same thing here. Dark Souls meets Tetris, to spell out the full slogan, if you will. The jury is still out on the former name-drop in developer Straka Studio’s efforts, but the latter icon does have its merits. It’s a risky endeavor to obstruct any ordinary tradition of simply moving via analog sticks and mouse keys. Risky and a little odd on top, but Loot River‘s gamble, least on early reading, seems to have paid off. 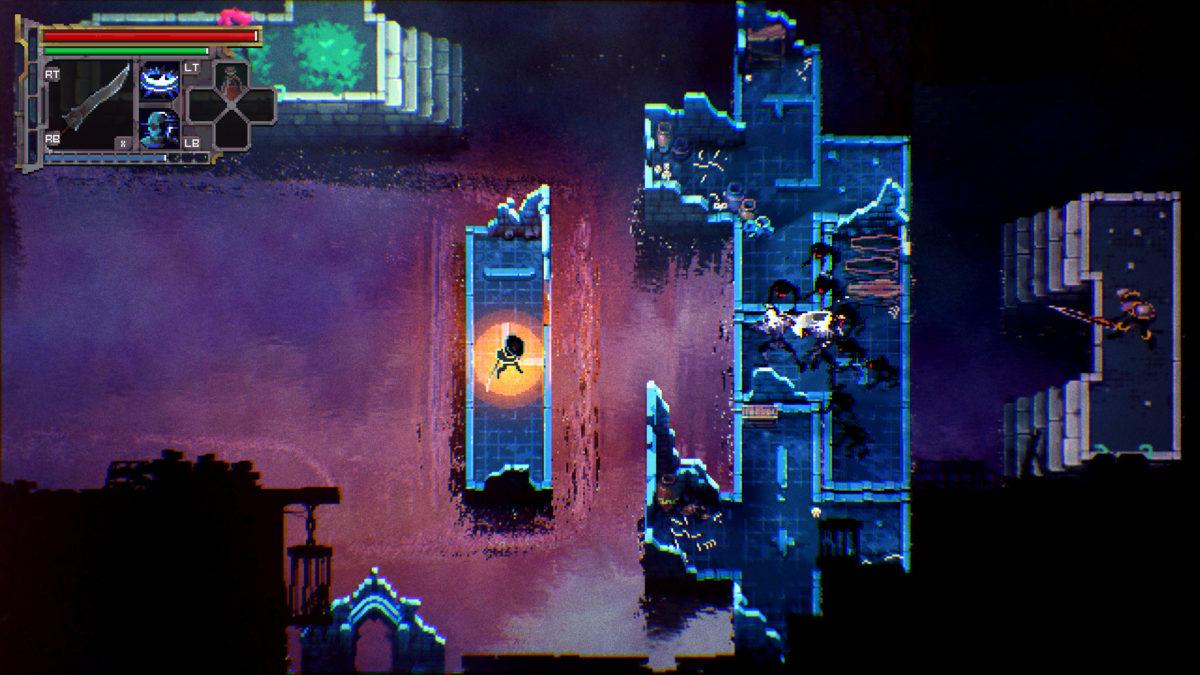 Let’s rewind a bit: Loot River‘s procedural nature comes straight out of the books of most roguelite releases. Enter a dungeon, see if you can make it all the way to the end, acquire random assortments of weapons/charms/abilities along the way and who knows: you may survive, you may not. There’s a hub to return to and improve one’s stats that may well be the vital part in achieving long-overdue success.. Looking at it from as basic a glance at this, Loot River is doing much that is serviceable, but not exactly stand-out. Enter, as mentioned, the minor details and bits of servitude that give this game some injection of novelty and surprisingly-effective synergy. A synergy its promotional slogan has been referring to this whole time. On your travels tackling dungeons, you’ll come across differently-shaped platforms that for all intents and purposes are essentially Tetromino blocks you can move in one of four compass directions. No diagonal movement, sadly. You have the straight I-types, the J/L variants, as well as ones completely square or rectangular. Some are elevated slightly, some remain fixed at ground level; some have staircases that lead to a higher/lower level, some merely make said staircases accessible.

The key is to manipulate the positioning of these platforms to proceed yes, but also in tackling the ample foes lying in wait. Combat utilization, in Loot River‘s case, is in how you position and reposition these platforms on the fly. Stranding a crowd of nuisance low-level grunts — preventing them from following you — by cutting off one platform from another. Or more comically, shifting a platform back and forth so that you can have opportune pop-shots at an enemy with a worryingly-mighty sword or lance at their disposal. Some may deem it exploitative — manipulating the purposeful limitations. And sure, those same people may call it cowardly or overly-safe, but Loot River seems to encourage this opportunistic behavior. It’s not like one still can’t trip over presumably-clever deception or trap the game has lying in wait. Mages that can cast fireballs at platforms so conveniently made of wood. Platforms that could also be connected to similarly-wooden areas you’ve inadvertently stranded yourself on, given you can’t swim in the pixelated water. Then comes the damage inflicted by said flames, until you so haplessly find a way to safety. 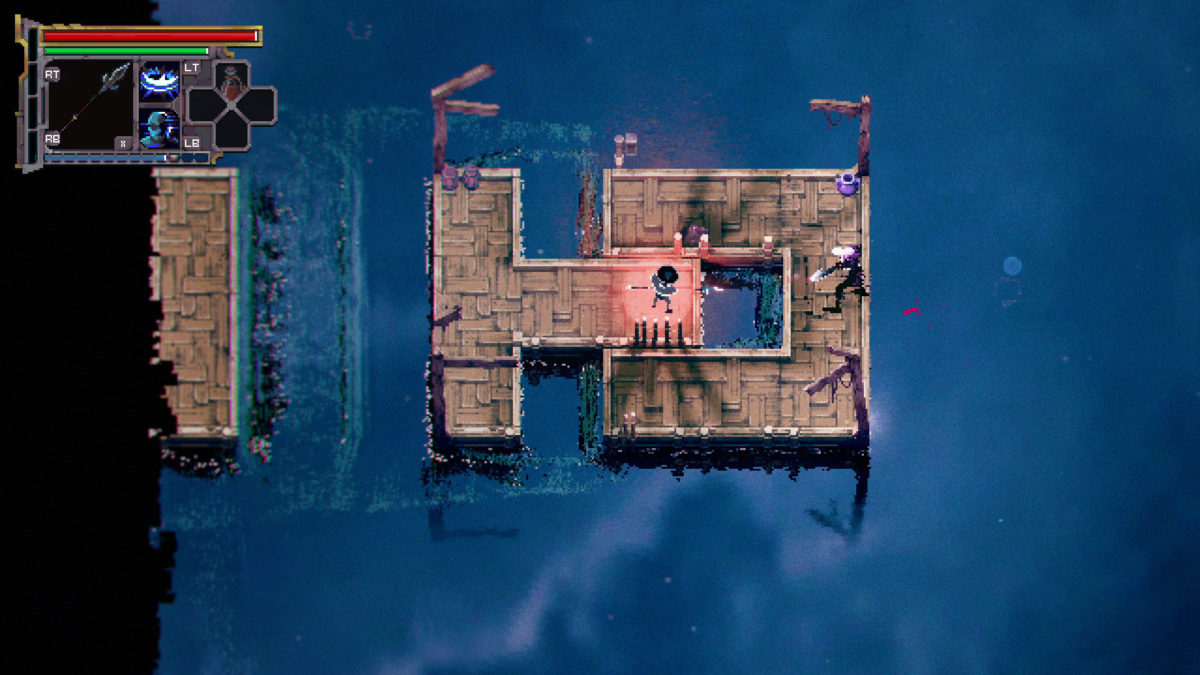 Loot River has its own [un]comfortable supply of “oh God, oh God, oh God…no no NO NO!!” emergent moments. It doesn’t quite have the physics marvel of something like Noita — a fellow rogue with a more gleeful emphasis on technical experimentation — but these are still moments unknowingly co-opted by player competence, or lack thereof. Meaning that the action of manipulating platforms isn’t some breezy, quirky alternative to your basic, run-of-the-mill movement. But good luck keeping unwavering focus on what you’re doing and not on what the game’s visual wizardry is bestowing on you. Some may still claim that Rare’s 2018 title Sea of Thieves still has some of the best in-game rendition of open water — waves and all — and while they may not be entirely wrong with such a declaration, Loot River’s water physics are no less a canny sight to behold. Each solitary shift of a platform causing the grainy, pixelated fluid to ripple and shimmer.

Call it a simple allusion with filters or post-processing alike, but Loot River‘s hazy, slightly out-of-focus vibe gives its dungeons that added level of depth. Even if said depth is exemplified merely in the details of its water — watercolor-like swathes of paler and darker hues of blue. Faded reflections of wooden posts coming and going as you make your way further on. Stare long and hard enough and naturally you’ll begin to see the pixel count on display, but Loot River is more than a pretty assembly of squares. It’s a game that accepts its time and place, embraces it. Rather than hiding from it, wishing to be part of an era long gone. Not unlike another personal anticipation in Sea of Stars; that game’s use of lighting and visual manipulation, coincidentally with its own render of water, to create some splendid meshing of nostalgic and contemporary visuals. And Loot River is no less confident in being able to fuse old with new. The result is a game that is both strangely out of time and in sync in bizarre unison. A game that desires your full attention, but hopes it can distract you enough to take in its small, aesthetic touches. But it’s these rich little details that I take away with me, perhaps more so than the combat. A fitting vibe for in so far as traversal has somehow welded together commonplace roguelite formulae and Tetris into a core loop that should never work, but could well do so if this strong start carries through to the end. Loot River is planned to release across Xbox Series X/S, Xbox One and PC sometime this year.