Monster Energy Supercross will be getting its second video game after its debut last year with Monster Energy Supercross – The Official Videogame 2. The game was announced last Friday at the annual Monster Energy Supercross All-Star Event in Las Vegas and we were in attendance to play an early build of the new game. The first release brought back an officially licensed AMA Supercross game that the world hadn’t seen in some time. On top of that, developer Milestone included a Track Editor that allowed players to customize and share their own course ideas. These things will carry over to the second game that will include a slew of improvements with a focus on realism.

Monster Energy Supercross – The Official Videogame 2 will include the top athletes and tracks from the 2018 season. One rider that was noticeably missing last year was Eli Tomac, the winner of this year’s Monster Energy Supercross All-Star Event. Tomac, along with 80 official racers from the 2018 season, will be in the game. This will also include 17 tracks available at launch along with the new NRG and Raymond James stadiums. Using a new face scan technology, the rider faces will look much improved this year.

Milestone is introducing a revamped and intuitive career mode this year. While this wasn’t playable in the demo, we were given an idea of what to expect. Players will focus on not only winning and being competitive, but on increasing fame to attract sponsors while managing media relations and rivalries with other riders. The career mode will feature an agenda full of events and activities to improve racing skills on four new tracks. This will include a training compound that was playable in the demo. The training compound is an open area that will be used to hone skills and work certain aspects of riding. Various terrain changes coupled with dynamic weather and a day-to-night transition will look to make the Compound stand out. The idea of having an open area to ride dirt bikes where all riders start out as this should be a cool addition to the game. 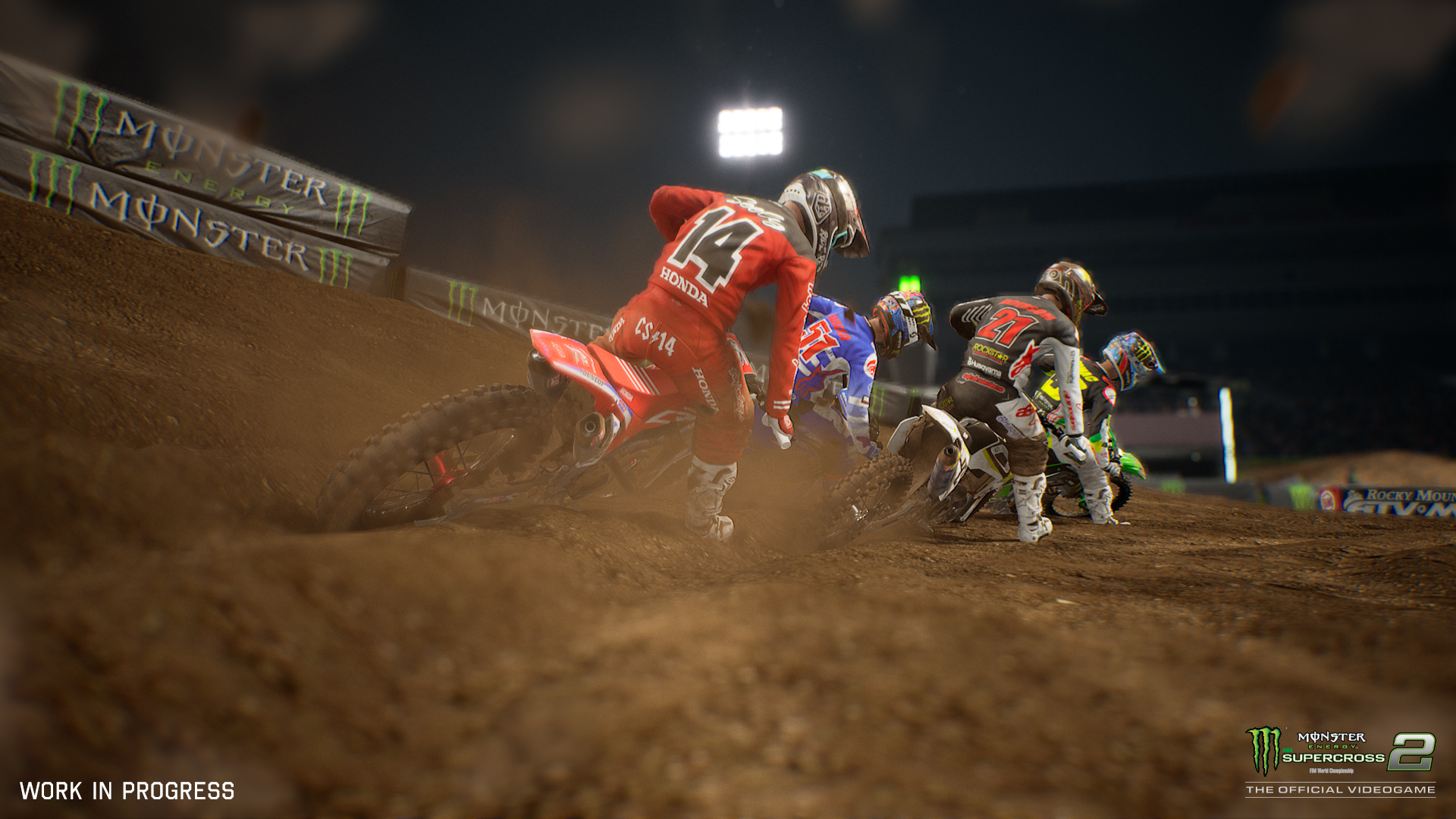 Customizing was a huge aspect of last year’s title and Monster Energy Supercross 2 will add to that. This game will contain more than 3,000 customization items ranging from physical appearance to accessories for race day. There will also be more than 300 customization mechanical parts for the bike. The focus is on creating unique and dynamic riders to truly make your player stand out to the competition.

New technology is being introduced to make this year’s game more realistic. Milestone has introduced Advanced Intertial Response and Real Terrain Collision technologies. The focus on this was to make bike control more accurate and realistic and this is truly felt on the track. While it was noted that the physics engine is a ways off from being complete, the feel of the bikes this year requires your attention. Knowing the track and the racing line is important as no longer will you be able to peg through corners. Players will use the right stick to help lean more into turns as feathering the throttle will be needed to get through long sweeping corners. Players will need to focus on keeping traction. The game will include a new riding line for specific jumps on the course. This is known as Dynamic Flow Aid. The team also addressed an issue with last year’s game of barriers remaining on the track for the entire race. 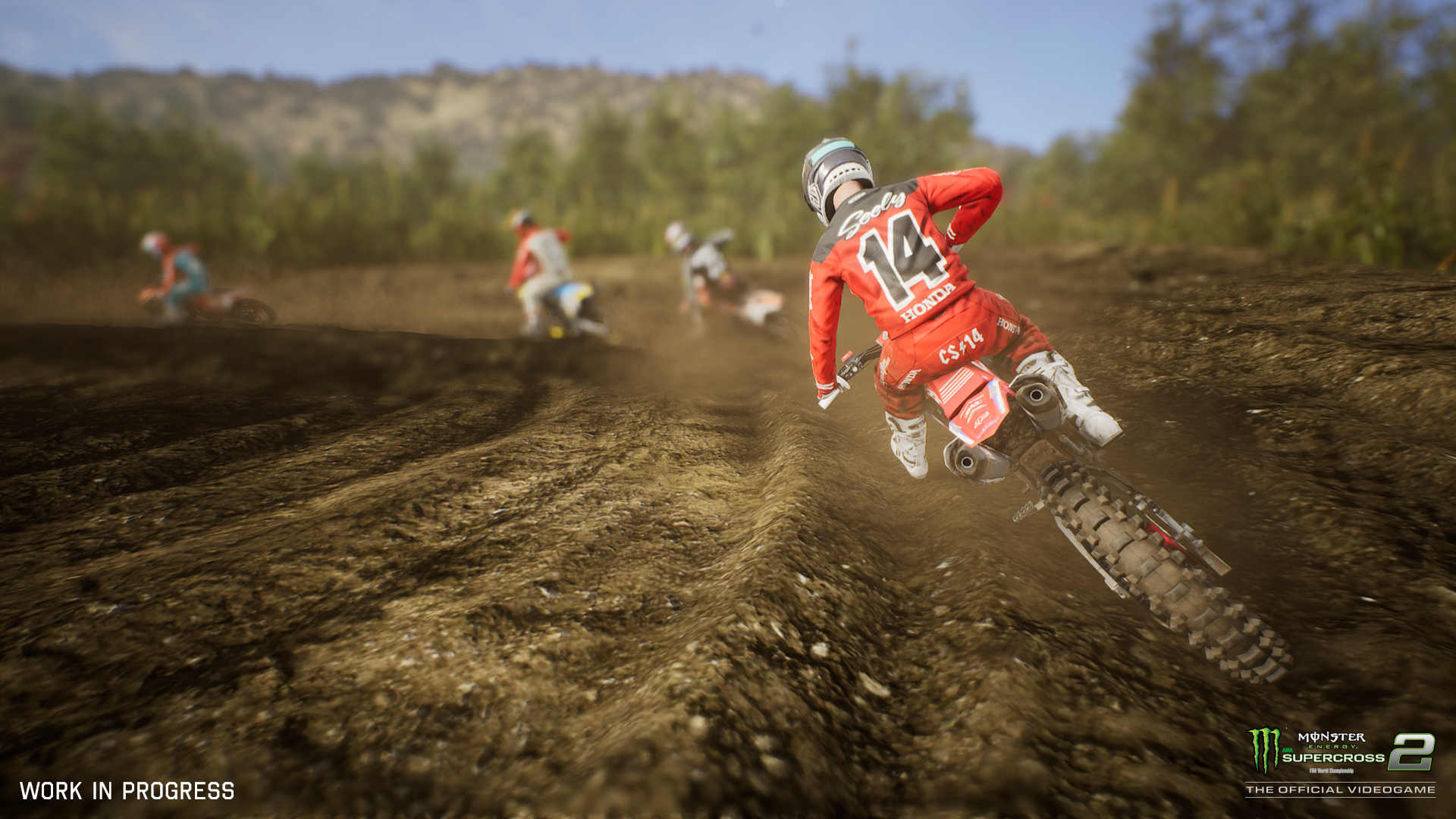 The gameplay also feels smoother in the demo in comparison to last year. The sense of speed has increased as that helps represent where the sport is going. Changes in speed from varying terrain such as sand can also be felt. Monster Energy Supercross 2 will also get a visual boost from its lighting engine. Colorful neons will pop more and the atmosphere of a Monster Energy Supercross event will again be captured complete with introduction, pyros and even dynamic user celebrations if you get a podium finish. The overall gameplay, at this stage, feels more intuitive and challenging.

Sometimes companies will get a license for a sport to try and make a quick cash-in on a franchise and that is not the case with Milestone. The team is dedicated and focused to bringing a much more realistic supercross experience to fans with Monster Energy Supercross – The Official Videogame 2. The addition of the open-field training compound and a deeper career mode will give fans plenty to dive into when the game releases on February 8, 2019. Monster Energy Supercross – The Official Videogame 2 will be available on PlayStation 4, Xbox One, PC and Nintendo Switch.