To answer your first question, yes, this is what happens when you’re trying to think of a unique headline for your preview and you’re slightly drunk. But allow me to explain. As you may know, chicken and waffles are two ingredients that upon first mention, you may not consider to go together well, but actually make for something unbelievably delicious in actuality (in fact, if you haven’t had chicken and waffles yet, you life is sadder for it). And the world of indie games is indeed full of several examples where two different genres are blended together into something delicious as well. And while Recettear also mixed together dungeon crawlers and management simulation to great effect, developers Digital Sun have their own unique recipe with Moonlighter that creates just as tasty of a treat as well. 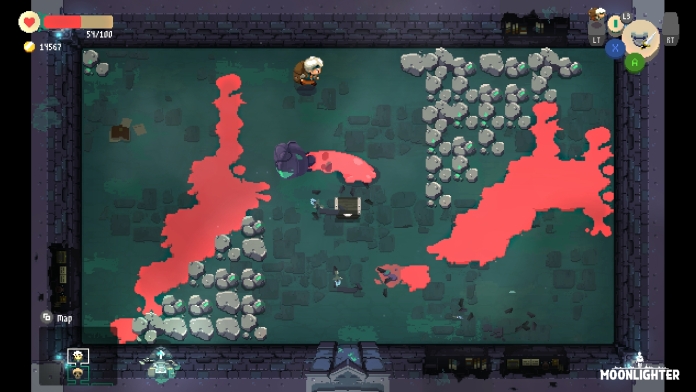 Playing as Will, a shopkeeper in a city full of adventurers who also has dreams of becoming a hero, we begin by exploring a dungeon filled with various monsters and armed with…a broom. Yeah, it goes without saying that the intro features an intentional failure. But after getting some assistance getting back, a brief tutorial, and a sword and shield, we headed back into the dungeon, aiming to grab whatever we can. Moonlighter‘s basic gameplay is very much Zelda-esque, as you traverse from room to room and fight various monsters, spotting their patterns and weaknesses and defeating them with a variety of techniques. Solid stuff that controls and plays perfectly.

But Moonlighter is also a game with roguelike elements, and like a lot of the best games with roguelike elements, the risk/reward factor plays a key part in crafting some interesting gameplay. And appropriately enough for a game revolving around gathering and selling loot, Will comes across a magical artifact that can take him out of a dungeon when needed, but to do so basically requires a certain amount of points that can only be earned by grinding up and sacrificing some of the loot you’ve come across. So you have to try and judge what items you need to keep for personal use and for sale, and what to get rid of in order to escape without (further) harm. 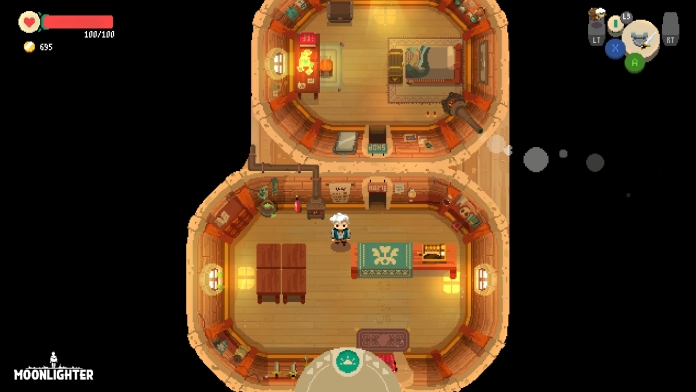 But yes, after coming back to the surface, it was time to have Will open up his modest shop. With only four spaces for items at the moment, I placed down whatever I felt can be spared, and set the prices for each one. And upon opening, as customers walked in and the little emoticons appeared above their heads, I noted how there seemed to be an awful lot of them which were excited and had dollar coins for eyes, suggesting that I might not have done enough research and sold everything I put on display for dirt cheap. Well, except for the Rich Jelly, which they all seemed disappointed in (evidently it was rich in calories, not in price). So having learned an almost-literally valuable lesson there, I then became prepared to study the other local shops to get an idea for how much to charge, or to even see about getting more effective gear. It was clear that Moonlighter was setting up a rather deep journey on both fronts.

So yes, two genres mixed together, creating yet another superb dish of chicken and waffles in the indie game world, garnished with a highly attractive 16-bit style to boot. The top-down dungeon crawling and item shop management are both simple yet highly enjoyable, and with the implication that things will get more complex, suggesting that Moonlighter’s unique adventure is going to be one that ends up being something quite addictive that you’ll want to come back to again and again (indeed, much like chicken and waffles!). 11 Bit Studios made a wise decision in deciding to help publish the game, and we’ll them offer up this dish later on in the future for PC, Xbox One and PS4.