Narcosis has a fairly standard premise for a horror game: you are the last member of your research team, trapped in your base with whoever – or whatever – it was that took out your comrades. Armed only with a small knife and some flares, it’s up to you to uncover the truth behind what happened at your research station and find a way to escape with your life. Again, pretty average stuff, except that the base you’re exploring happens to be three miles (give or take) underwater. Also, it’s flooded, you’re running out of oxygen, and the high pressure is turning all the nitrogen you’re breathing into a powerful narcotic. On a scale of one to screwed, you are pretty screwed.

Somehow, though, you know that you will make it out alive – specifically, you know because the entire game is narrated by your character like some old war story. It’s an interesting narrative decision – on the one hand, knowing that does somewhat defang the game’s biggest threats, but on the other, grizzled old men telling tales of high-seas terror is a staple of the setting. The grim narration ultimately enhances the game’s atmosphere with creepy descriptions and unnerving foreshadowing, giving character and texture to environments that (while gorgeous) might otherwise feel overly sterile. 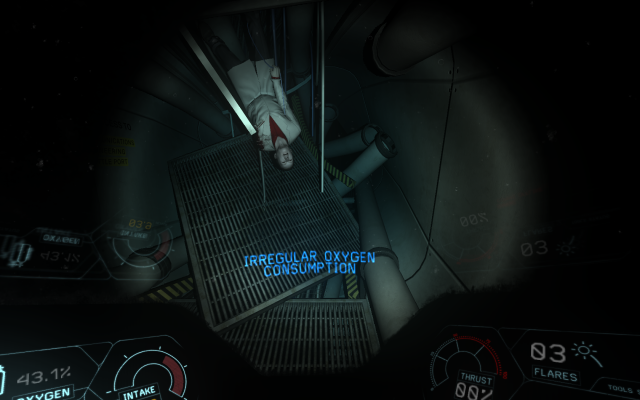 It’s hard to overstate just how good-looking Narcosis is. It starts with the lighting, which is all too rare in the inky depths beyond the reach of the sun’s rays. Your diving suit’s light only shines a few feet in front of your face, and though flares can be used to see further ahead, even their range is disconcertingly short. If you are lucky enough to be near a light, though, you’ll see it cast reflections in your helmet’s visor and play across the walls and rocks of the ocean floor as though it were really rippling through water. When illuminated, the environments look appropriately desolate and unnerving, if not particularly imaginative. What’s clever is the way the game uses water physics to put gruesome details in your face, forcing you to push past floating corpses and viscera in order to progress.

The twisting tunnels of the research base and endless blackness of the open sea do create a disturbing sense of claustrophobia, which isn’t helped in the slightest by your diving helmet. The helmet obscures your peripheral vision, and the crack in its glass serves as a constant reminder of the danger all around you. You can’t even see your HUD properly without glancing down into your suit, which of course bears the risk that something will sneak up on you while you’re checking your oxygen and battery levels. 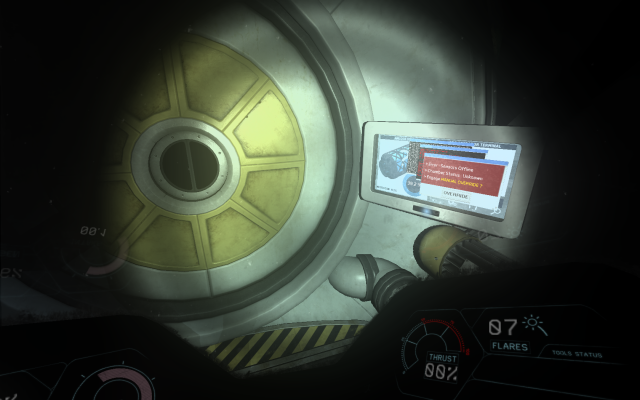 Which brings us, in a roundabout fashion, to Narcosis’ biggest draw: VR. Spooky as the game might be on a computer monitor, it’s downright terrifying when played with an Oculus Rift and a good pair of headphones. You really feel like you’re trapped in the helmet, alone with the sound of your breathing and distant noises muffled by metric tons of high-pressure water. A few Amnesia clones have already tried to bring horror into virtual reality, but Narcosis represents the best attempt so far – keeping the player in a heavy diving suit provides a near-perfect justification for the stationary position they’ll likely assume while playing it, not to mention an ideal excuse for an in-world HUD. Plus, as premises go, being stranded at the bottom of the ocean as you succumb to encroaching madness is a lot scarier than the Slender Man.

Gameplay-wise, Narcosis differs from other first-person horror titles in that it actually allows you to defend yourself. In addition to a flare gun, your suit is equipped with boost jets that allow you to zip around at a good clip and avoid enemies, and you start the game with a knife at hand, though it’s fairly ineffectual as weapons go. Fighting is possible – and occasionally necessary – in this game, but it’s almost never advisable, since getting close to enemies causes you to breathe erratically. That, in turn, eats away at your air and causes you to hallucinate. These hallucinations are vivid and scary as all hell, and I think we can expect to see the lines between insanity and reality blur as the game’s mystery unfolds. Narcosis is the most frightening VR game I’ve ever played, and while I can’t say I look forward to diving back into it, I can’t help being pulled in.