Over the first five months of this year, some of the largest games this generation has seen have been released. From the quite possibly largest open-world game of all time in The Witcher 3: Wild Hunt to the massively hyped Evolve, there’s been no shortage of AAA games. And with the release of meaningful indie titles like Massive Chalice, There Came an Echo and Magicka 2, it says something about the industry that a great deal of smaller titles are outdoing their bigger counterparts.

Yet even amongst these large releases, arguably the smallest game I’ve played all year (Desert Golfing notwithstanding) has won me over.  Ninja Pizza Girl, a flow-based platformer from Australian-based family developer Disparity Games, is a title that, after a great deal of disappointment from a number of 2015’s larger titles, has reaffirmed my love of gaming. It isn’t the most polished, complete or perfect game (hell, its name isn’t even that great), but there’s something about its mechanics and physics that shows a commitment to the most important factor in video games: gameplay. Disparity Games is clearly doing something right here, and that’s something that should matter to gamers near and far. 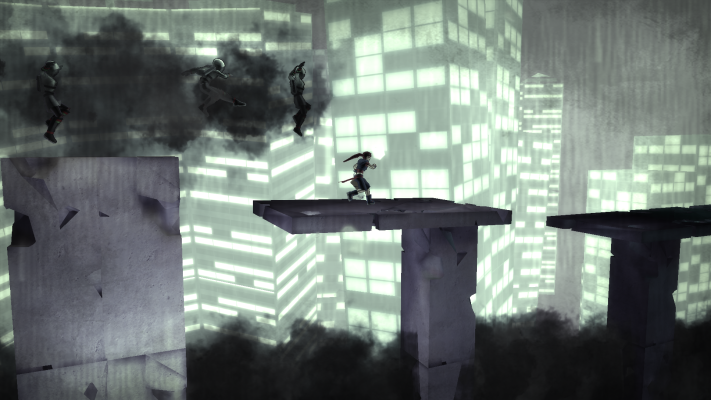 So what is Ninja Pizza Girl? You could unpack the name all you want, but all that will tell you is that you play as a female pizza-delivering ninja or a female ninja that happens to be made of pizza (unfortunately, the latter isn’t true). In a nutshell, Ninja Pizza Girl is a time-based platformer centered around rhythm, accessibility and the idea that depression and bullying really suck. Players run, jump, dropkick and slide their way to whichever house they’re tasked with delivering pizza to, all while avoiding bullies intent on making your day worse. The concern with games that have real-world messages is that the thematic elements will take precedent over the actual gameplay, but the star of Ninja Pizza Girl is its physics system rather than its lessons.

Ninja Pizza Girl feels like a traditional 2D Sonic game with a level of non-linearity thrown in. Like with those beloved blue hedgehog titles, players have to maintain speed across a series of platforms while avoiding enemies and collecting optional pickups. What makes Ninja Pizza Girl fascinating, is that traditional platforming deaths are notably absent, as failing to continue along a given path drops you down to an entirely new path. The greatest players will find a way to get ‘A’ rankings on every stage, nailing the most difficult maneuvers over and over, but those who simply want to take in the aesthetics, listen to the outstanding soundtrack and complete each level won’t find themselves stuck trying to land the same jump over and over again. As with any time-based, level-based game, the potential for failure still exists, as failing to deliver your pizza within a given time frame will cause it to get cold and inedible, but this isn’t the type of platformer that’ll give players the level of challenge that, say, Spelunky does. Think of Ninja Pizza Girl as a platformer that’s easy to pick up and learn but difficult to master. 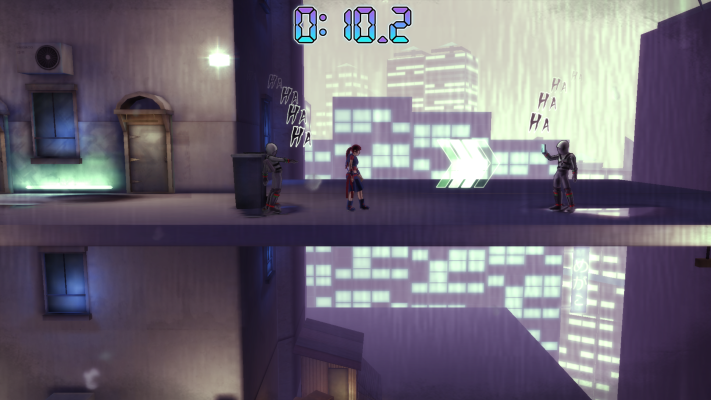 Every jump feels precise, with each moment you spend in the air seeming like the perfect amount of time. Of course, this is a title that’s still in Early Access, so not everything is absolutely perfect, but the framework for a fantastic platformer is certainly in the works. Perhaps the most interesting mechanic is the use of sound and color to illustrate your character’s mood. Whenever you lose your momentum or are attacked by enemies (who taunt and ridicule you whenever you fail), the music slows down and the world’s color shifts to grayscale. Slowing down too much will cause the main character to get so depressed that she won’t be able to continue without some well-executed button-mashing. It’s phenomenal to see a family work together on a game that tackles a number of real-world issues, such as transgenderism, bullying, poverty, and depression, but none of this would be as meaningful if the core mechanics weren’t solid.

It’s impossible to talk about Ninja Pizza Girl without diving into the social issues it’s attempting to tackle. Seeing games attempt to tackle major societal problems is always fantastic, though it’s even better to see games tackle them subtly. From getting up after a bully knocks you down to finding appropriate clothes for a transgender woman looking to feel better about her appearance, Ninja Pizza Girl presents powerful themes in a cheerful, occasionally cheesy package. This isn’t the type of game that’ll bring tears to your eyes like Gone Home or Journey, but it’s great to play a game that plays well, all while inspiring uplifting feelings. However, it certainly a pleasant surprise that Ninja Pizza Girl places gameplay at the front and center of the experience while making real world issues the icing on the cake. 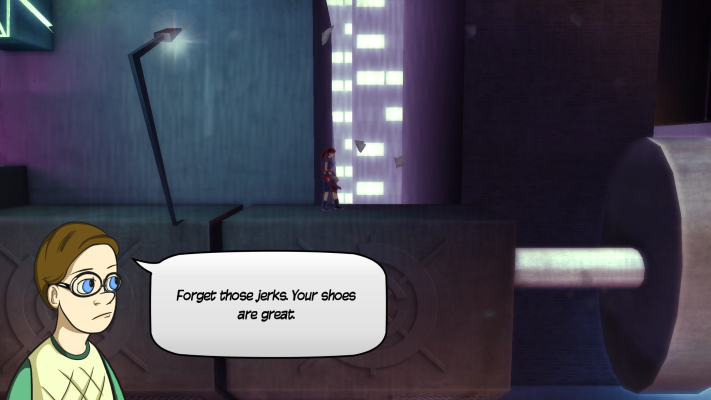 If you’re going to support an independent game this summer, consider making Ninja Pizza Girl your pick. This is everything right with small indie development, as it’s clear that Disparity’s limited resources are being placed in the right places. From its awesome soundtrack to its solid physics, Ninja Pizza Girl is as pleasant a surprise as we’ve seen so far from independent studios this year. With AAA games taking more time and money to develop, independent projects are not only filling in the gaps, but they’re providing unique experiences that major publishers wouldn’t touch. Ninja Pizza Girl feels like it embraces this idea, and it’s going to be exciting to see what Early Access funding is able to do for the final product.